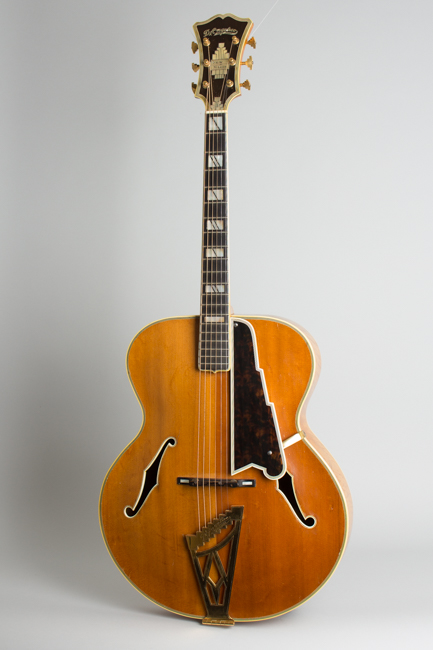 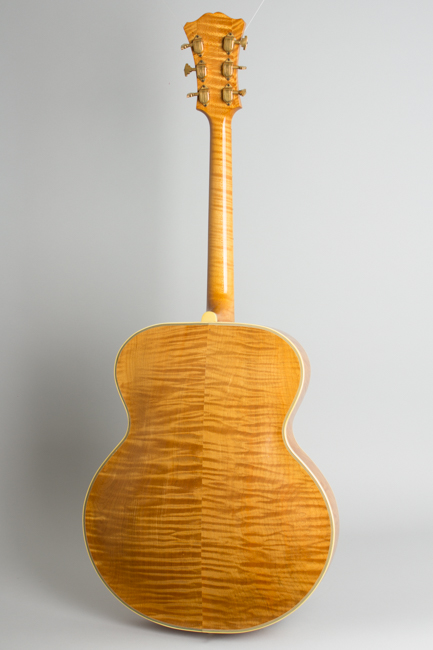 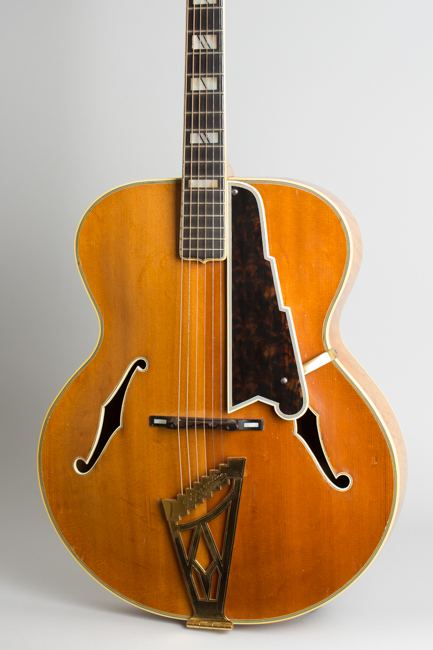 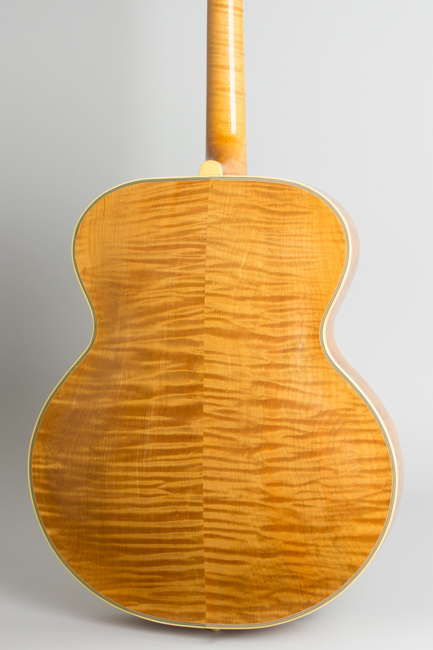 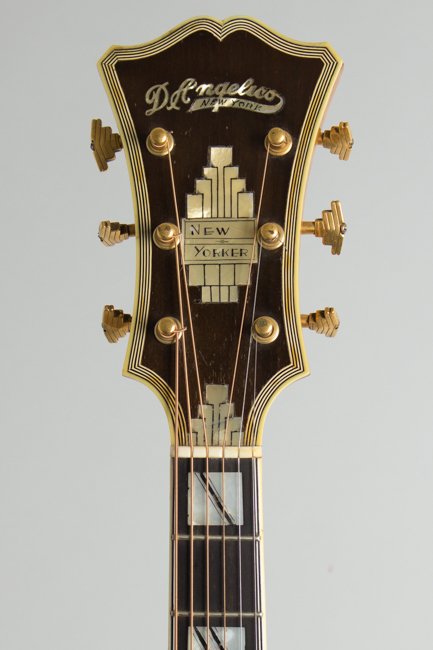 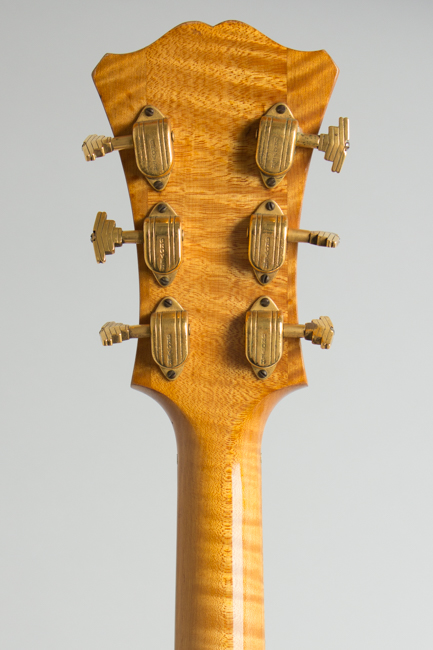 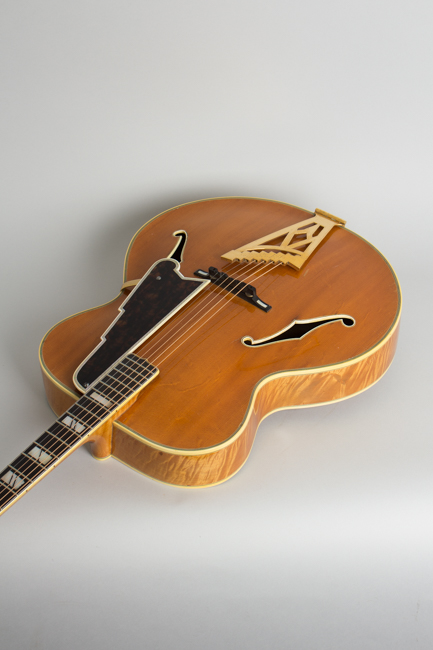 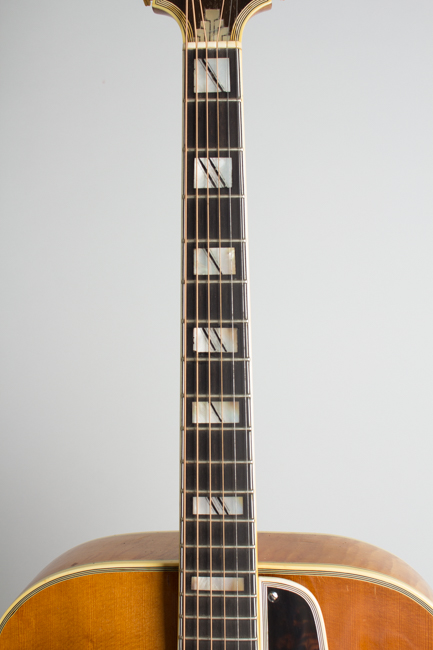 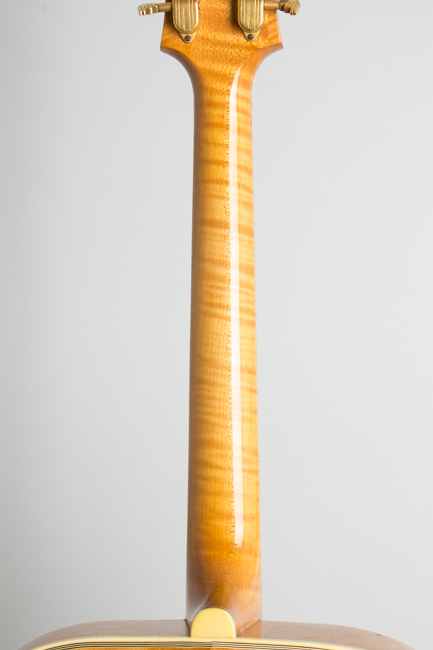 This beautiful blonde 1943 D'Angelico New Yorker is a wonderful example of this most esteemed builder's finest work, as well as a simply fantastic guitar to play and hear. John D'Angelico built these instruments one at a time for the players of his era, but even so he really was building for the ages. Each of his instruments stands as a unique creation that is not only a work of art, but can be the finest tool for musical creation one may imagine. This guitar has a simply sublime sound, demonstrating once again that the authentically legendary status held by this single builder is no fluke.

In 1943 the 18" wide New Yorker was one of two top-line styles offered by D'Angelico, along with the 17" Excel. This New Yorker in a natural finish was the absolute top of the line, the most elaborate and expensive D'Angelico guitar made, although even in 1943 there were custom variations possible. In 1943 he had not yet started building cutaway instruments; that began in 1947 following Gibson's lead.

At this juncture, John's clients were mostly working guitarists, both well-known names in the jazz and session/broadcasting worlds as well as now-forgotten players who worked the more prosaic restaurant, wedding, and social "casual" gigs common at the time. He also built a number guitars to order for individual shops to sell, especially in this WWII period when Gibson and Epiphone guitars were very hard to come by. This guitar is noted in the D'Angelico ledgers as completed and sold to Economy Music on 11-29-43. This particular shop had relatively few D'Angelico guitars built for them right around this time, and this appears to be the only New Yorker they ever received.

The features of this New Yorker are fairly typical for the period. The back and sides are made of spectacularly figured curly maple, with a strident flame pattern. The parallel braced top is carved from fine tight-grained spruce with some bearclaw figure on the bass side. The top and back are enclosed in 7-ply Celluloid binding inside a double wide outer layer, with a side line. The f-holes are triple-bound. The body dimensions are a 18" lower bout width with a depth at the rim of exactly 3". The carved ebony bridge with pearl insets in the base and engraved, gold-plated Art Deco stairstep tailpiece are typical D'Angelico fittings of the period. The multi-bound celluloid pickguard is in the original style but of more recent vintage.

The one-piece flame maple neck has a noticeably narrow 1 5/8" nut width and a 25" scale. The triple-bound ebony fingerboard is ornamented with pearl block inlay in the typical New Yorker segmented block pattern. The neck has a slim "C" profile and is very comfortable to play, despite the rather narrow width. The headstock has the "D'Angelico New York" script inlay at the top, above the inlaid pearl block design engraved "New Yorker" and made to resemble the skyline crown of the famous midtown hotel of that name. It has very prominent 8-ply binding with a thick outer layer. The tuners are the then new Deco-styled gold-plated Grover Imperials used on all of these guitars.

This instrument has a sound all its own; huge but sweet with a singing well-rounded treble over a firm but tight bass. As it is parallel-braced it was likely intended for orchestra use originally, and probably built for a player with a fairly small hand. Despite its size this is a very easy guitar to handle, with a superbly fast and amazingly "modern" neck feel. There are few guitars in the world with this much history and sheer class built in; we are once again thrilled to have another of John D'Angelico's finest creations to offer.

This spectacular top-of-the line D'Angelico shows some old repair work but remains an exceptionally fine-playing and sounding guitar. The natural lacquer finish is likely an old refinish, appearing to have been done either by John himself or his successor Jimmy D'Aquisto. The quality of the work is to their style and standard, but is not consistent with John's work of the 1940s. The instrument does not show much play wear at all.

The binding is actually in far better and more original condition than many old D'Angelicos. The only area rebound is the outer edge of the f-holes, and it mounts a very finely detailed reproduction pickguard in the exact original pattern. There is one small extra hole in the side from another guard mounted at some point. The guitar must have always been played sitting down; there is no mark from any upper strap button. It has been expertly refretted, and plays magnificently. A true pleasure to play, hear or even simply behold, this New Yorker really is one for the ages. Overall Excellent - Condition.
×