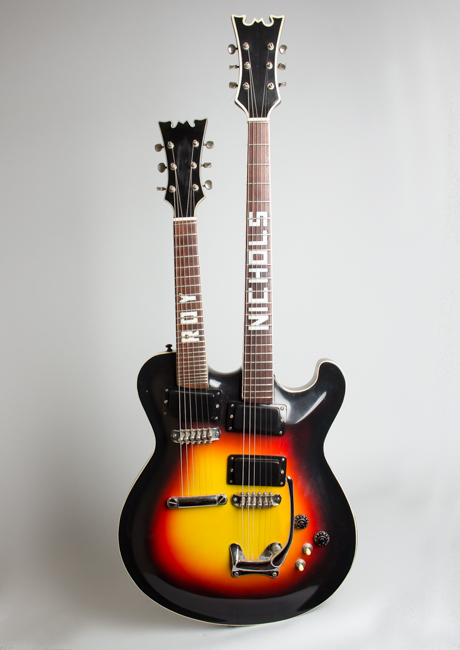 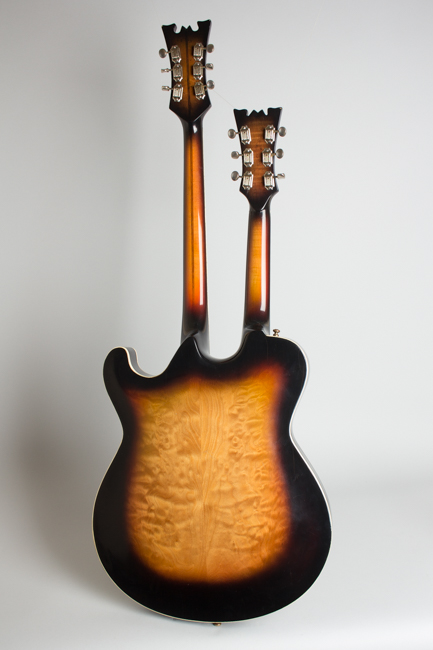 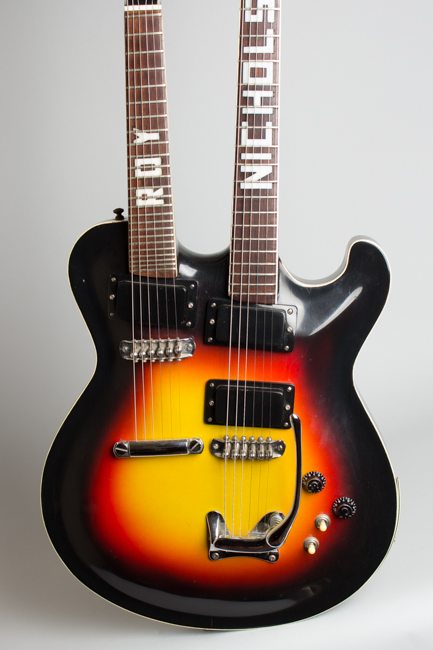 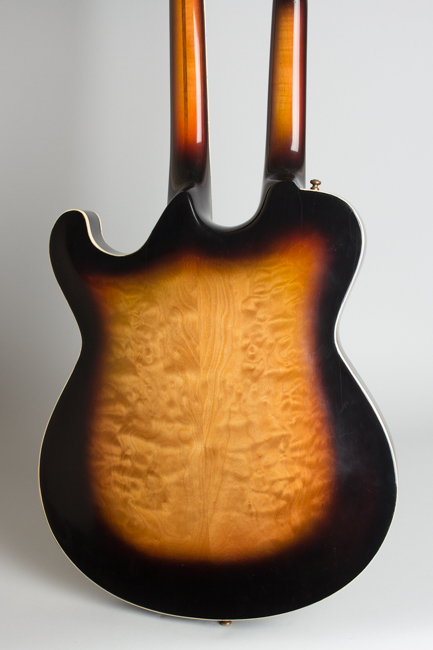 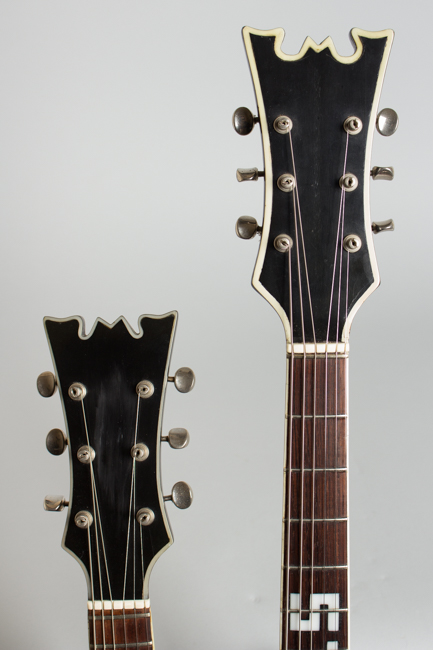 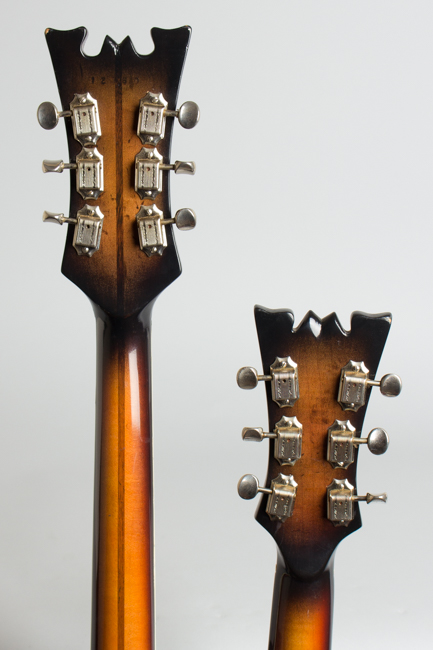 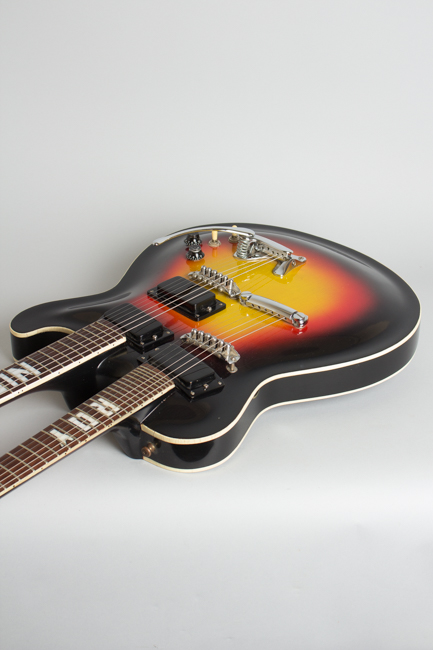 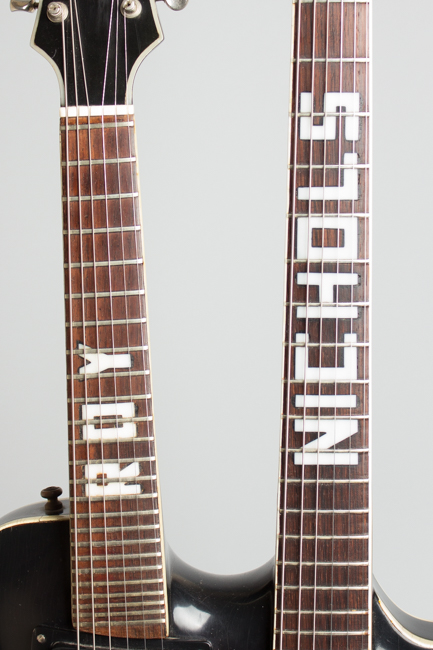 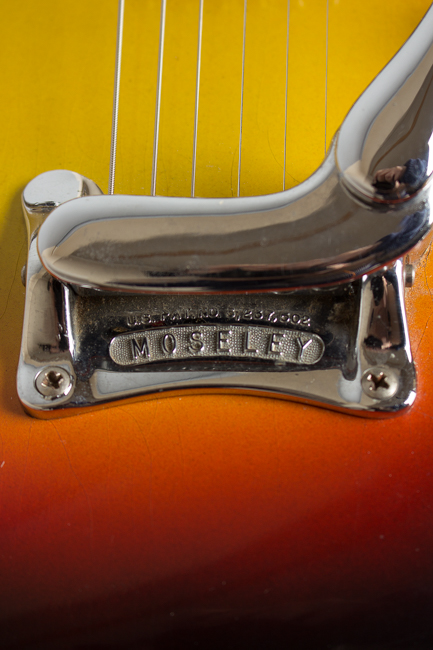 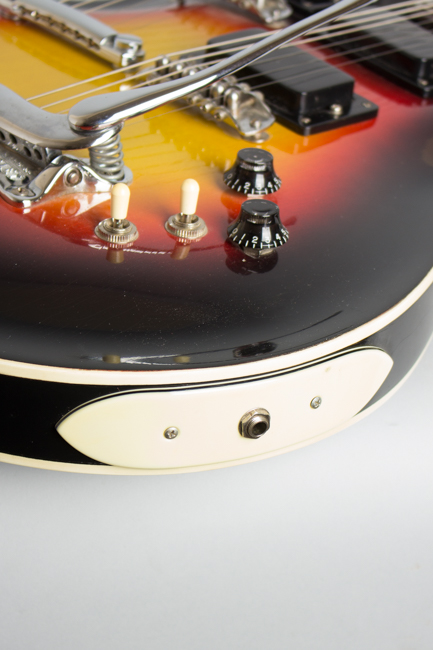 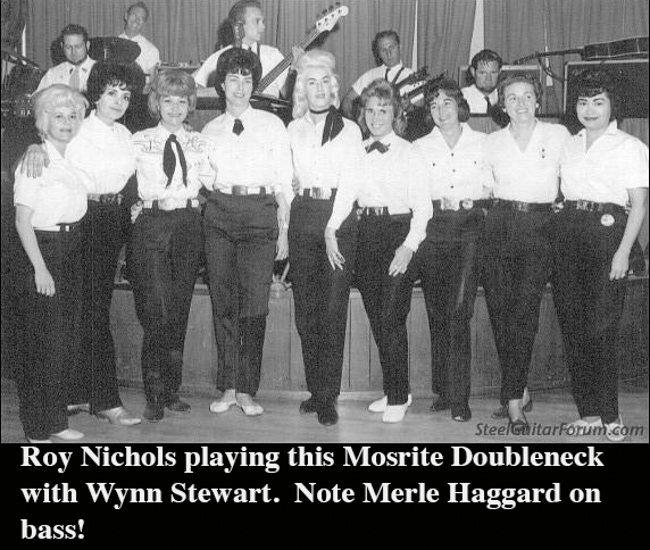 This very early Mosrite double neck instrument is an exceptionally rare and supremely hip guitar, a piece of Bakersfield country fretted heaven with quite a history. Mosrite creator Semie Moseley was one of the great American guitar stories, going from rags to riches and back again more than once building his always unique instruments.

This guitar is representative of the instruments he was hand-making in the late 1950s, long before there was a Mosrite factory of any sort. The guitar was custom made for (and still carries the name of) Roy Nichols, one of the seminal pickers of the California country scene, most remembered for a long stint as Merle Haggard's lead guitarist and right-hand man. Nichols is venerated by country guitar fans as one of the unsung greats of the genre, and was a major part of the Haggard sound for decades.

When this guitar was built for Nichols, Mosrite (spelled Mos-Rite in the early days) was essentially a one-man operation, but Semie Moseley never stopped trying to get his guitars into places they could be seen -- and heard. He had scored a superbly high-visibility endorsement in the mid-'50s by getting hotshot picker Joe Maphis to play an over-the-top flashy doubleneck guitar as his main instrument, and that was the start of bigger things.

Maphis' supremely hot picking was regularly featured on the local California "TOWN HALL PARTY TV" show, which broadcast live country music every week. Maphis was both bandleader and soloist on the show; his ultra-flashy guitar was visually unique, and even on small flickering TV screens made an unmistakable impression.

The upper neck was tuned an octave above the lower, inspired by the sounds Les Paul got on record by speeding up the tape. Maphis used it to execute uber-fast picked runs and fiddle tunes that would be very difficult on a standard guitar, and many local pickers took note. Soon Semie was getting orders from other hotshot guitarists who wanted the sound -- and style -- Maphis was showing off every week on TV.

This slightly later doubleneck Mosrite is also woven into Bakersfield country music history. It's not possible to know exactly when Roy Nichols decided that he needed a Maphis-style guitar, but it was likely around 1959 that it was built. It probably looked somewhat different then, in all probability loaded up with more decorative "geegaw" in the style of the Maphis model. What is certain is that Nichols' name graced the fingerboard from day one, as benefitted an up-and-coming player looking to make a splash.

When the guitar was made for Roy, he was a working player on the Southern California scene but not a well-known name. After a stint with the Maddox Brothers & Rose as a teenager, Nichols had settled in to a day-to-day gigging life, playing most often in local singer Wynn Stewart's band.

Stewart was also a bit of an entrepreneur and ran the "Nashville Nevada" Club in Las Vegas, where many California-based players would gig regularly. There is one existing photograph of Nichols playing what appears to be this guitar in Stewart's band circa 1962, with a young Merle Haggard on bass. At the time, "Hag" was trying to break into the business as a pro, and playing as a sideman for an more established artist was a standard route for an up-and-coming singer or songwriter to get experience in the rough-and-tumble world.

It is quite likely that the first time Haggard and Nichols shared a stage, Roy Nichols was playing this guitar. While other hot California pickers, including Phil Baugh, made more use of their Mosrites, legend has it that Nichols, a long-time Telecaster user, was not entirely thrilled with his. There is a tale that he eventually left it at a bus station, only to have it returned sometime later; after all, it had his name on it in huge letters!

At some point, likely long after the alleged bus station incident, the guitar was heavily re-worked by Moseley himself, which was not uncommon. Most similar early Mosrites were rebuilt or updated over the years as Semie Moseley went from garage-based amateur to head of a manufacturing operation, and back again. Although there is no record of how many were built, current estimates of the number of surviving original hand-built doublenecks is less than 10, with only I or 2 in fully original condition.

Moseley himself was extremely proud of these first handmade guitars, and wanted to keep them in professional playing condition so they would continue to be functional player's tools. Preserving their original state was not considered important compared to keeping the functional aspect upgraded to whatever the current standard had become.

The result of this is that this particular guitar presents a large collection of eccentric features, from a mix of different eras. The stylish liquid-art semi-hollow body has a recessed German curve sculpted edge, finished in a vibrant 3-color sunburst. It is hollowed out from inside, so is not as heavy as it looks! The top is a solid carved piece, and is unusual in not having a large cutout for the controls under a pickguard, but the controls mounted directly.

We have seen only one other Mosrite of similar construction. The necks are set in with elaborate rounded heels dressed away on the treble sides -- a superbly elegant touch. They are quite slim and flat, in the typical Mosrite style. All edges are bound in white.The guitar was re-finished in the typical vibrant 1960s Mosrite Ventures style 3-color sunburst on the top, back, and backs of both necks.

Hardware is mostly later than the original build date. The pickups are handmade Semie Moseley units in his early 1970s style, potted in the typical epoxy compound that seals the coils and prevents them being examined too closely. These have no visible poles, and based on the shape appear to be humbucking units, although that is difficult to absolutely confirm. They are mounted in very elaborately hand-sculpted wooden rings, elegantly curved to match the sloped surfaces on the body. The sound is rich but still with substantial output and top end.

Both bridges are typical 1960s Mosrite factory units; the vibrato is a short-plate "Moseley" marked casting. The octave neck strings are anchored by a Gibson-style bar tailpiece; this likely replaced the small top-mounted tailpiece Moseley generally used in the '50s on the non-vibrato necks.

Mosrite's proprietary strap buttons are still present, but the switch tips and knobs are more like '70s Gibson pieces. The wiring is straightforward with two switches: a neck selector and pickup selector for the bottom neck and master tone and volume knobs.

The fingerboards are inlaid "Roy Nichols" in large block capital letters, executed in the peculiarly milky translucent white plastic that Semie Moseley favored. The elaborate headstocks with bound edges and M-shaped crowns (that resemble a rampant bat more than anything else) are devoid of markings, although it looks like something may have been erased from the upper face.

The tuners are later 1960s "double line" Kluson Deluxe machines, as typically used on factory Mosrites from that period. The full-scale neck has an incredibly thin nut, under 1 1/2" wide. This was something of a Mosrite trademark in the earliest days. Oddly the octave neck is closer to 1 5/8", despite the skinnier string outfit!

These first "Mos-Rite" guitars were each hand-built and exist today only in tiny numbers. Despite the alterations from its original form, this unique instrument is a classic and very stylish piece of California "hillbilly" cool, a significant piece of guitar history. It is also still a working instrument, perfect for these vintage styles it was intended for and more.

It may well have been in Roy Nichols' hands the night he met Merle Haggard; it was certainly played when the two shared a stage in Merle's formative years. "Oh, the stories it could tell"!

This unique instrument appears little-used since being heavily reworked, probably sometime in the early 1970s. There is only minor playwear here and there, and some small cracks to the binding on the edges near the neck joints, and to the lower fingerboard which appears to have been refretted and rebound.

The frets on the upper neck are very low and flat in the typical early Semie Moseley style, while the lower neck has slightly taller but narrower wire more likely to be comfortable for the average player. The two pickups on the lower neck are wired out of phase, giving a nice snappy twang in the middle position.

Although eccentric in the extreme, it is a very good-playing and sounding instrument, and a fantastic example of Semie Moseley's early fretted creations. Overall Excellent Condition.
×