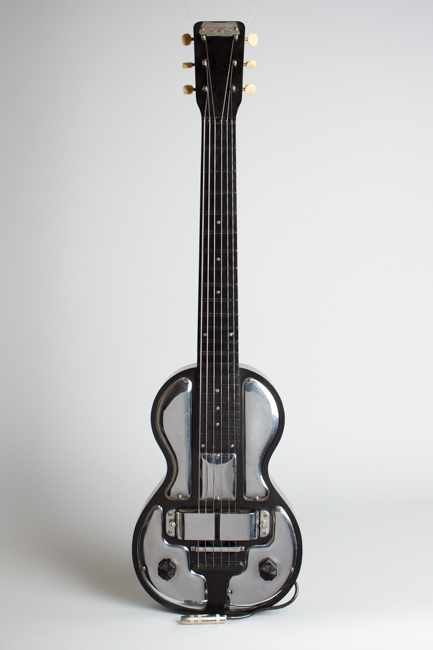 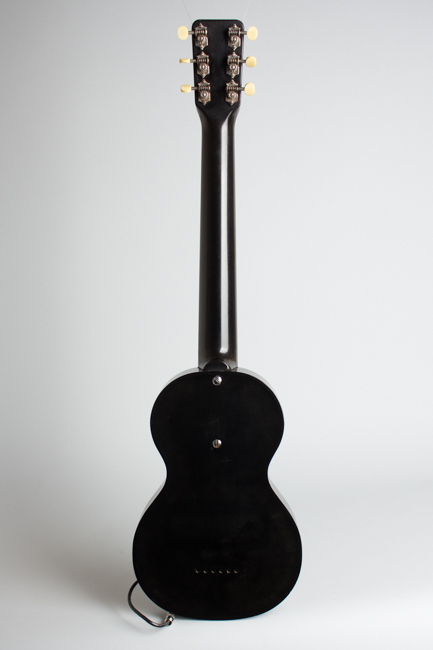 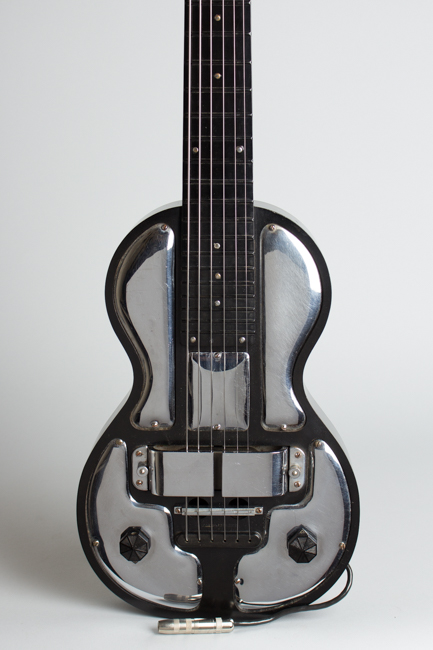 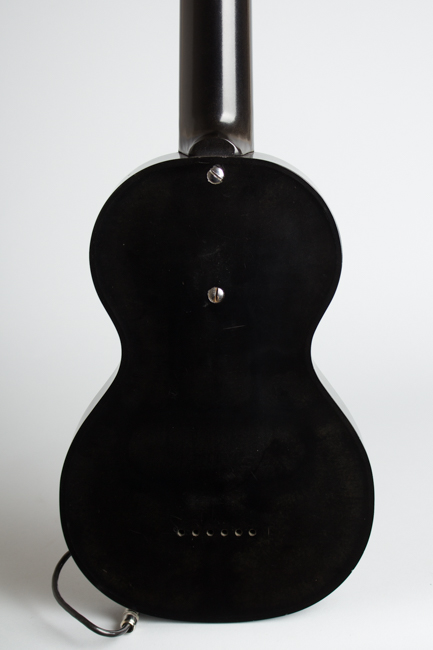 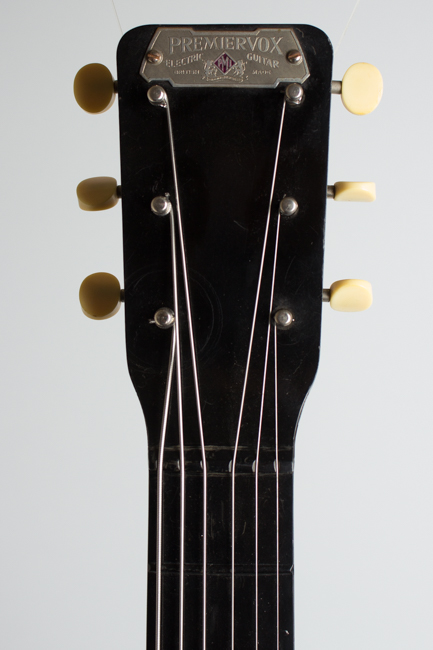 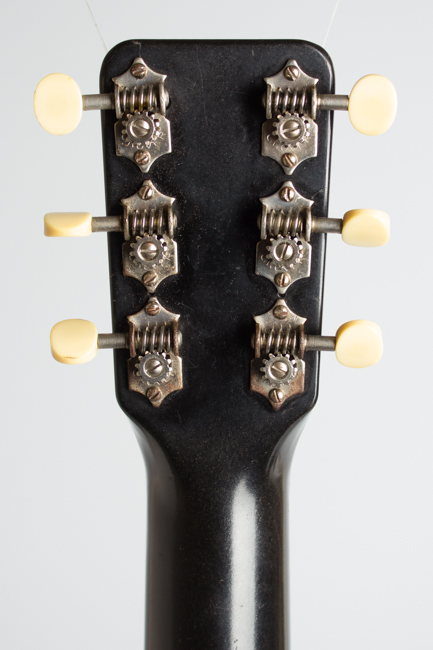 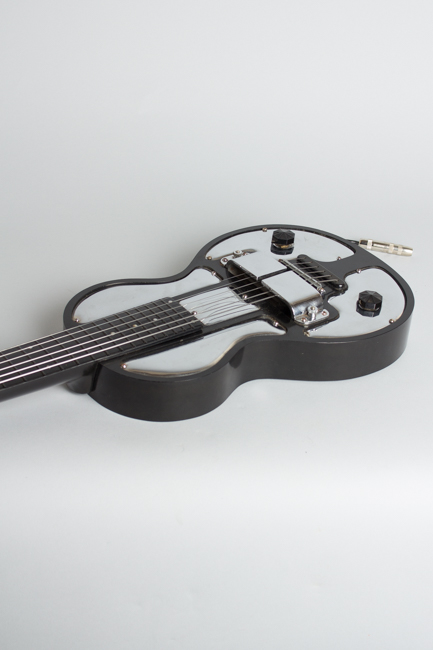 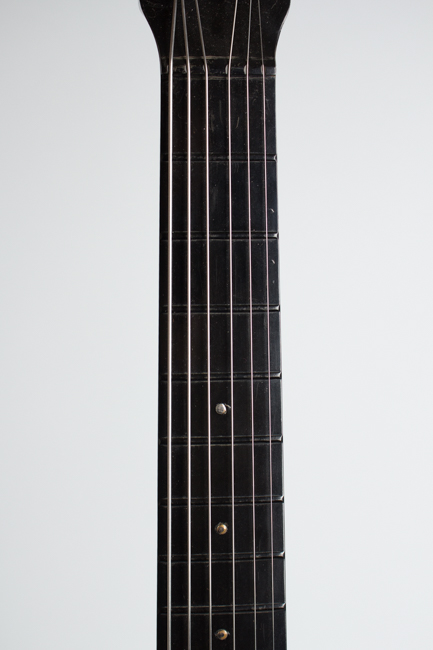 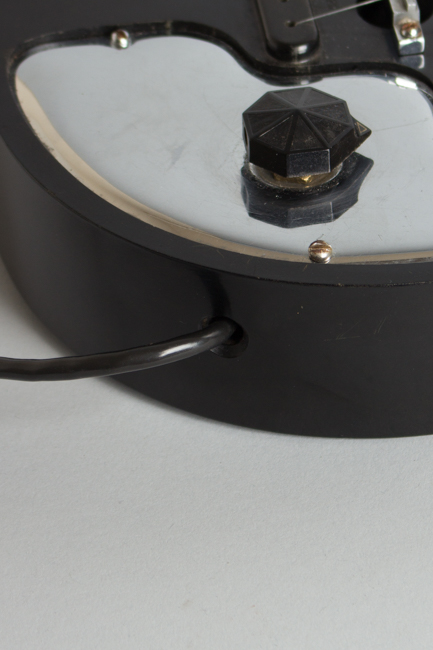 This is one of the rarest electric guitars we've ever had...and that's saying something! Almost certainly one of the very first amplified instruments ever seen in the UK, this "Premiervox" guitar is the "Export Model" of the Rickenbacker Model "B" Bakelite Spanish Guitar, which is itself a considerable rarity.

This instrument was assembled in England from parts supplied by Rickenbacker from California around 1937-8. For the most part it is the same as its American cousin, but there are fascinating differences as well.

The pickup is made from Rickenbacker factory components, but the coil was wound in England to different specs. This example is laid out like the second generation American-made Model B with a volume control on the upper bout and tone control on the lower. There is no jack; it originally had a hardwired cord and is currently set up with a female enclosed jack on the cord near the body.

All the fittings are the same as the American version, but the overall fit and finish is not as elegant. The Bakelite body is not polished out as nicely, and the edges are still sharp, not rounded off. The small chromed fingerboard markers are rather crudely installed and the string holes in the back are not as cleanly drilled.

The metal headstock tag reads "PREMIERVOX Electric Guitar, British Made", which is obviously not exactly the case. The shaped hard-shell case is English, and much resembles a violin case -- doubtless the form it was made on. These were originally marketed as Hawaiian guitars; there was virtually no market for an electric Spanish in England before WWII.

To that end, they were fitted with raised nuts; the small scars can still be seen on the nut here where the metal riser rested. While not a great player's instrument, this is a very cool relic of the period of earliest international interest in the electric guitar.

This guitar remains all original with no damage or repair, with the only alteration being the cord attachment. It shows signs of use in the Hawaiian guitar style, notably marks from the nut raiser and some scuffing to the metal parts, but no major wear. The plates have some scratches in the chrome but are not badly dented.

The neck has enough warp to be noticeable (as do nearly all of these) and would best be described as marginally playable in Spanish mode; perfectly functional set up Hawaiian. The pickup is nice and powerful but the tone control doesn't seem to do much of anything.

The guitar comes complete in a very nice original case. A fascinating and historic piece of Rickenbacker -- and electric guitar -- history. Excellent Condition.
×