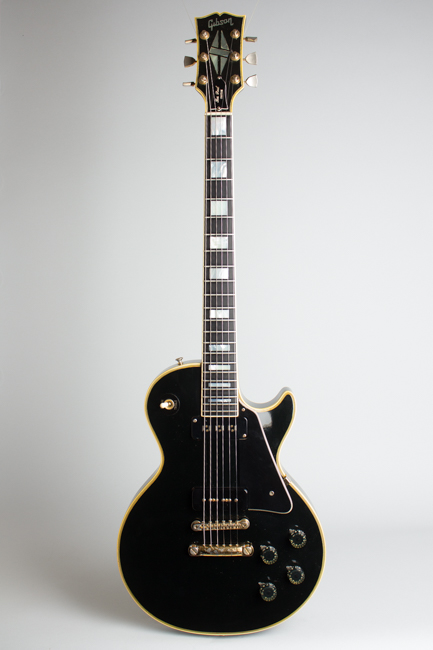 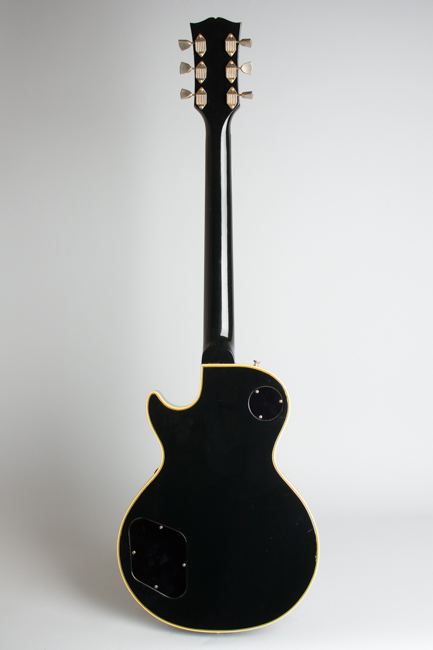 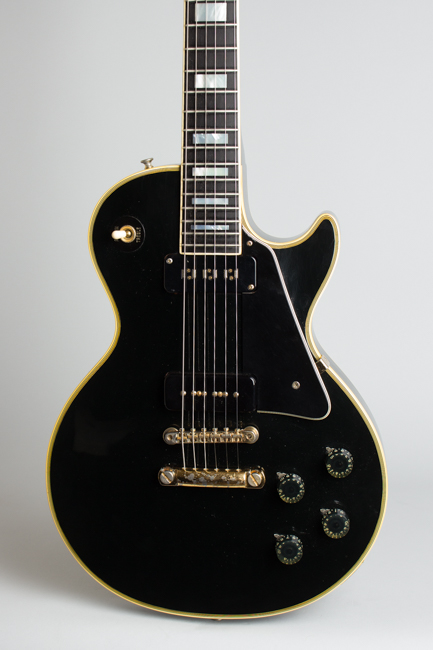 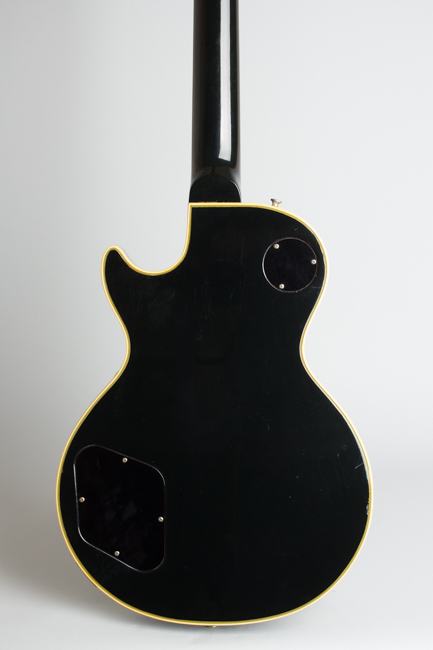 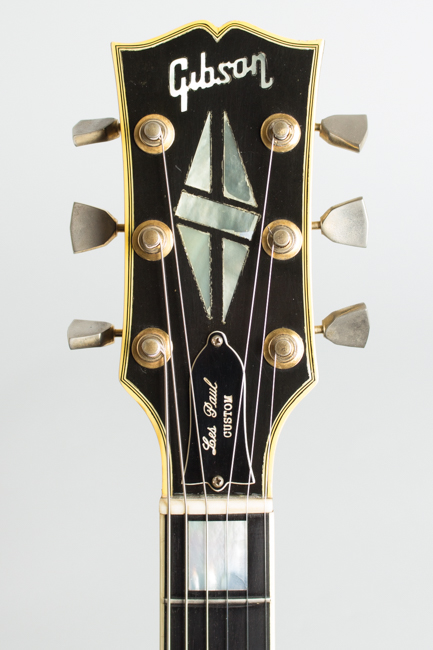 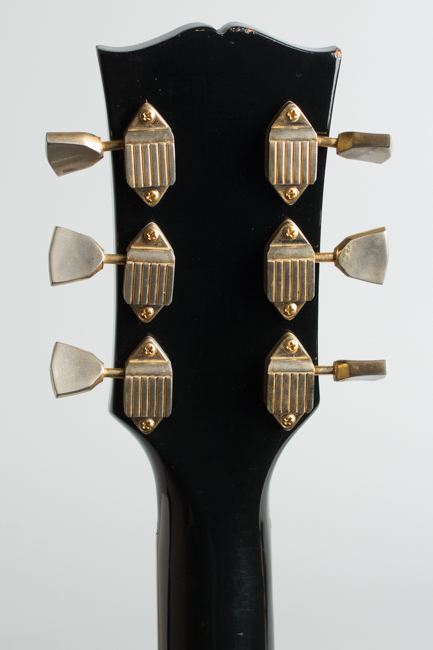 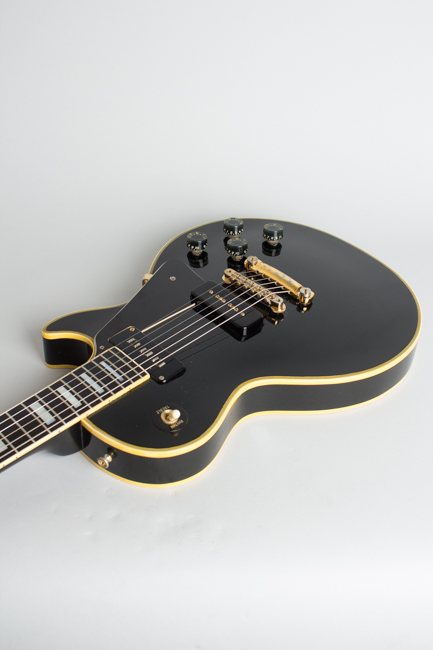 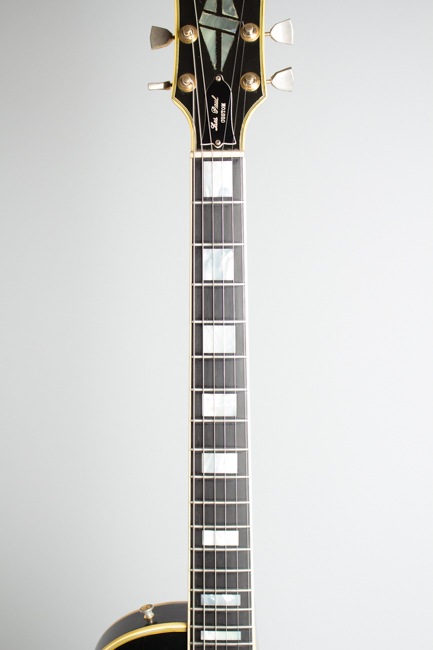 This "Black Beauty" is one of Gibson's earliest and most accurate "vintage reissue" instruments: the 1972-73 Limited Edition of the 1954 style Les Paul Custom. The original Custom was Gibson's top-of-the-line solid-body in the 1950s, with gold-plated hardware and deluxe appointments drawn from the company's flagship archtops.

The model was introduced in 1954 and proved to be Les' personal favorite; he and Mary Ford performed for the rest of the 1950s on modified Customs. The Gleaming black top was Les' idea; he called it a "tuxedo effect" and insisted it made the player's hands stand out to the audience!

Gibson first re-issued the Les Paul Custom in 1968, but it was a hybrid model with humbucking pickups and a maple cap body. Some players still clamored for the original style Custom as issued in 1954, and by 1972 Gibson obliged with this early "Limited Edition" reissue.

The guitar has many features of the 1954-7 Custom model quite accurately replicated. The multi-bound carved-top solid-body is made entirely of mahogany, with no maple cap. The fretboard is ebony with pearl block inlay, and carries the original small "Fretless Wonder" wire that Les himself preferred. The elaborate split diamond inlay on the headstock was borrowed from the Super 400, Gibson's most expensive guitar. All hardware is gold-plated.

The Custom was actually the first Gibson to feature the then-new Tune-O-Matic bridge, although this was no longer a novelty in 1972! More uniquely, it was the only solid-body to carry the "Alnico V staple magnet" pickup designed in 1953 for the company's high-end instruments.

Mounted only in the neck position, this unusual pickup has a very powerful magnet structure and gives a distinctive "snap" to the sound -- in 1954, 1972, or now. The bridge pickup is a standard P-90, in this case wound on the clear plastic bobbin typical of the early '70s. This combination gives the instrument an excellent range of tones quite different from the common humbucker-equipped Les Pauls.

With pots dated the 51st week of 1972, this guitar was likely assembled and sold in early 1973. It retains the older Sprague "Black Beauty" caps that now stir the emotions of tone-circuit fanatics. The serial number carries a "LE" prefix denoting the limited edition status.

Only 1,150 total examples of this model shipped out of Kalamazoo in 1972 and '73, and it has become one of the most sought-after Les Pauls of the era. Gibson has done many "historic" re-issues of older models since, but this early example of the trend towards re-creating the company's past glories still stands as one of the best.

This guitar shows some VERY light wear but is extremely well-preserved. It does not appear to have been played extensively over the past 45 years; the finish shows only some tiny dings, scuffs, and handling marks. The gold plating on the hardware has some loss on most areas, most notably the top of the tailpiece. The D, G, and high E string tuners are slightly bent but still work fine.

The original very low, flat frets are still intact and the fingerboard shows evidence of some re-crowning work. The guitar plays well within the limits of this "Fretless Wonder" setup; many of these have been refretted over the years as most players prefer a meatier wire for better response when bending. As this one remains in fully original condition, we leave the choice of this up to the next owner.

The instrument includes the original classic '70s black Tolex shaped hard case with a purple lining; the booklet/hangtag with an unfilled warranty card is still in the pocket. Excellent + Condition.
×