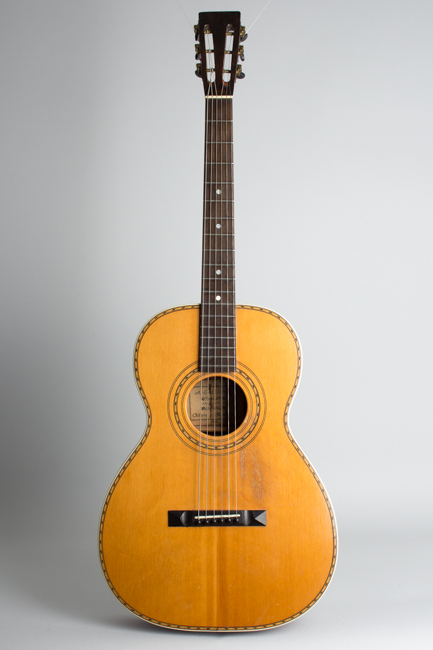 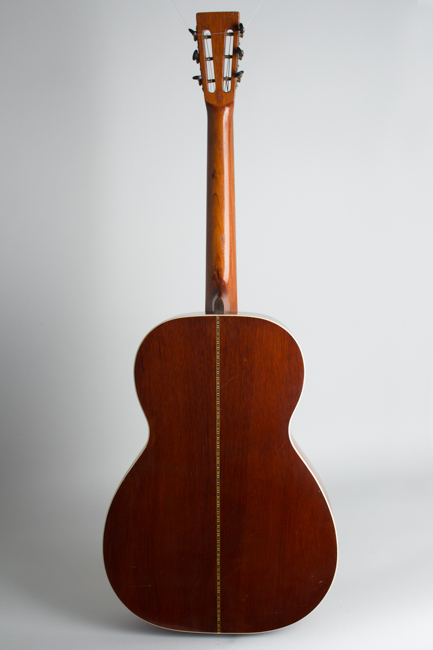 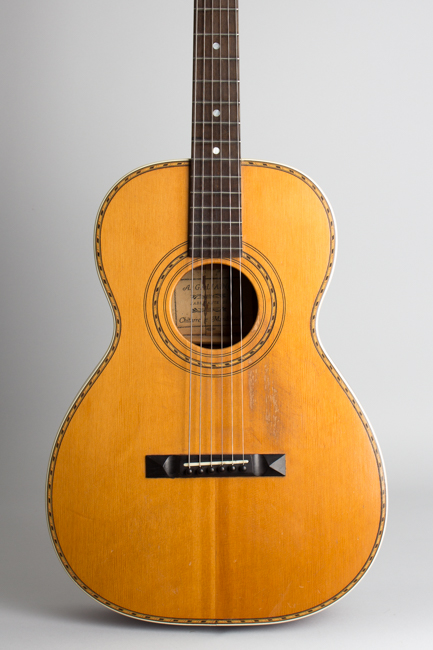 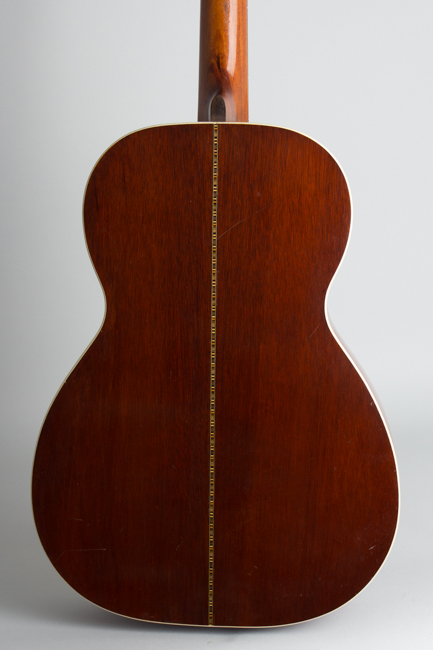 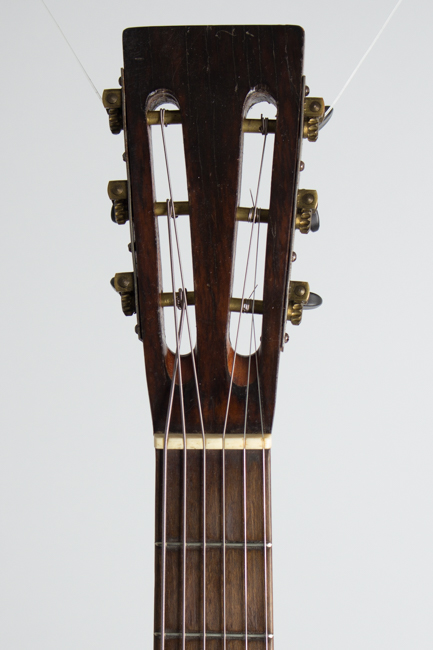 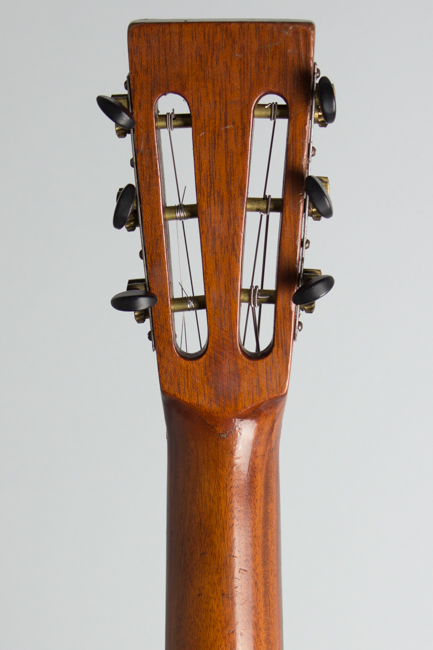 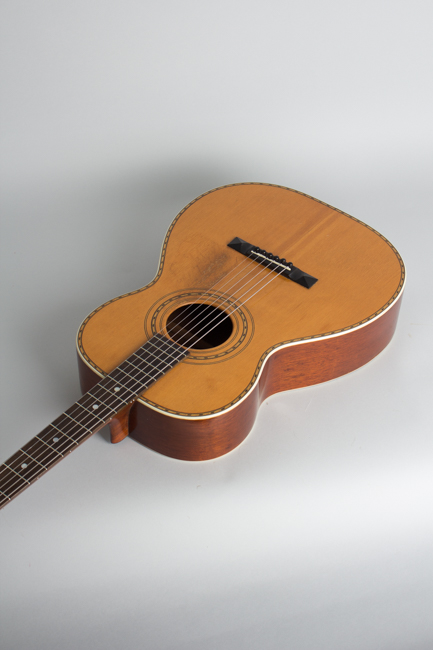 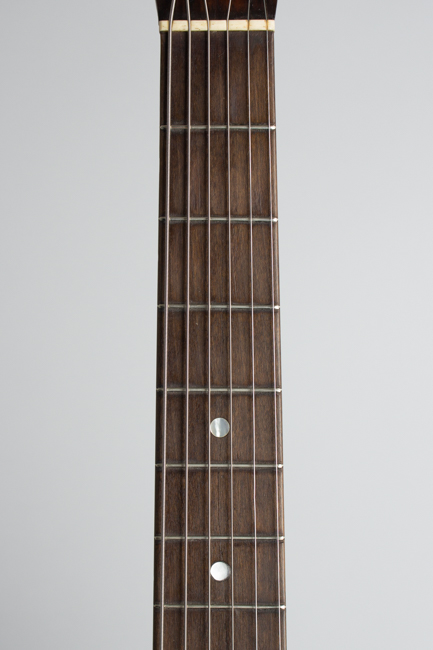 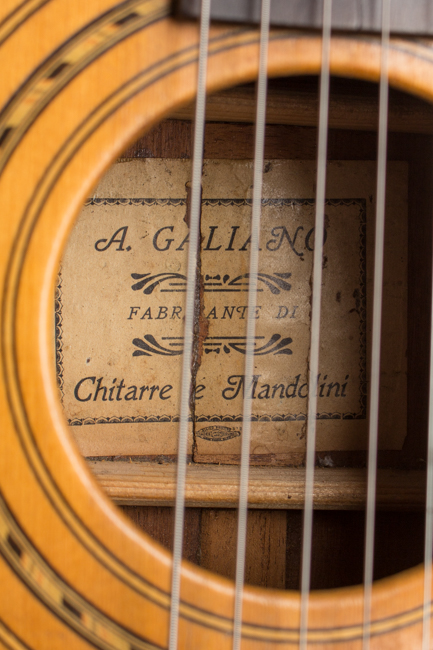 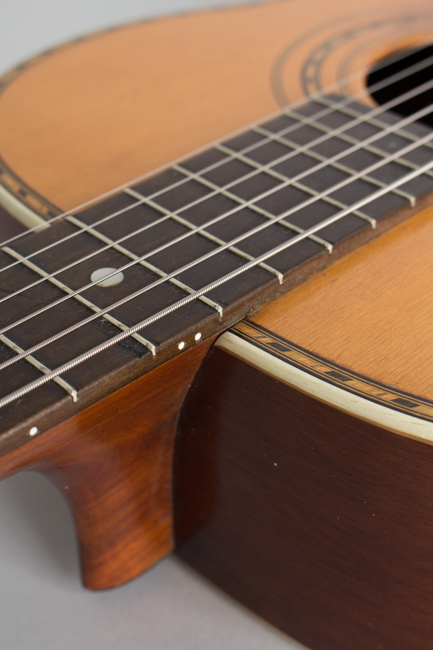 This is very interesting nearly 100 year old guitar, not only a great-sounding and playing piece but very well-preserved for an instrument from this time and place. New York City of the 1910s and 1920s was teeming with immigrants, including large numbers from Italy.

The first quarter of the 20th century saw the establishment of what has become sometimes referred to recently as "The Italian Guild" -- a set of affiliated small retail stores and instrument workshops operated by Italian immigrant luthier/businessmen including Antonio Cerrito, Raphael Ciani, J. Nettuno, Nicolai Turturro, and others. Some of these craftsmen appear to have had close ties to the Oscar Schmidt Company's instrument factory in nearby Jersey City, NJ, builders of the iconic "Stella" guitars.

While often similar in design, the instruments produced in the small Little Italy shops exhibit a higher level of craftsmanship and original detail than Schmidt factory products. Bowlback mandolins were predictably the most popular offering, but the guitars are the prizes today. Many of these instruments were labeled "Galiano", a non-specific brand name that appears to have been shared by several of the shops and used on both handmade and re-labeled factory product. Many of these instruments appear to be hybrids of Schmidt-made parts fitted and finished out by hand in these local shops, which made for a faster process than building completely by hand.

This large-body "Galiano" flat-top is just under 15" wide at the lower bout and almost 4" deep, quite a big guitar for the time. It has features generally indicating the 1915-30 period, most likely assembled in the Kenmare Street shop of Raphael Ciani where the young John D'Angelico was serving his apprenticeship. The back and sides are made of high grade mahogany; the top is very narrow straight-grained spruce. The top and sound hole are bordered with colored wood marquetry and additional contrasting wood strips, the top and back single bound in white celluloid.

Internally, the ladder braces are few but rather heavy with a large flat bridge plate and the kerfing is cut square, all features typical of Schmidt-made guitars. Like many of these instruments, this guitar appears to have been assembled from an Oscar Schmidt factory-made body fitted out with a handmade neck and finished at the Little Italy shop.

That neck is carved to a fairly slim and shallow "C" profile typical of New York Italian instruments, quite unlike Schmidt factory product that typically used a more hard "V". It is made of mahogany with an interesting grain pattern, mounted to the body with a mortised heel joint with a beautifully sculpted slim "French" heel. The 25 3/4" scale fingerboard is "ebonized" maple with large pearl dot position markers. The bridge is the original "pyramid" style with the saddle relocated and angled for better intonation.

The label under the sound hole is a fancier variation than some, reading "A.Galiano Fabricate di Chitarre E Mandolini" with a small New York printer's mark at the bottom. This is a large guitar for this time period of the type often seen in cafe or restaurant groups, which required a big sound to cut through the din. This guitar does indeed have a very big sound, and is currently strung for a low tuning in the B-C range, putting out a huge deep rumble. This is a fabulous example of New York Italian guitar-making at its finest and a superb find in a +/- 100 year old large-body guitar.

Overall this is quite a well-preserved guitar for the time and place it comes from, with just some moderate wear and a minimum of well-done restoration. The only major repair that is visible is the original pyramid bridge has had the saddle relocated farther back and compensated, greatly improving the intonation. The neck has been reset and the frets -- which appear original -- have been leveled. There is an old repaired crack running most of the way up the center of the fingerboard.

There is some fairly light wear to the finish overall, including dings, dents, and scuffs. The top has a larger area of pickwear into the wood behind the sound hole, and it looks like a small pickguard was once affixed there and later removed, leaving a slight shadow. The bridge has been reglued and the center seam behind it resealed. Internally everything appears original including the few but rather large ladder braces and the thin flat bridge plate, which has some wear in the center but is still intact.

This instrument has been better cared for than many similar guitars and remains quite solid and an excellent-playing and sounding guitar. It is currently low tuned and sounds spectacular, but would be quite suitable for standard tuning as well with a lighter stringing. It has a perfect sound for older fingerpicking and blues styles, with a huge growl and a snappy, aggressive yet miles-deep bass response. This is a true gem in an authentic large-body 1920s flat-top; medium-fancy and as good a player from this period as we generally expect to find. Excellent - Condition.
×