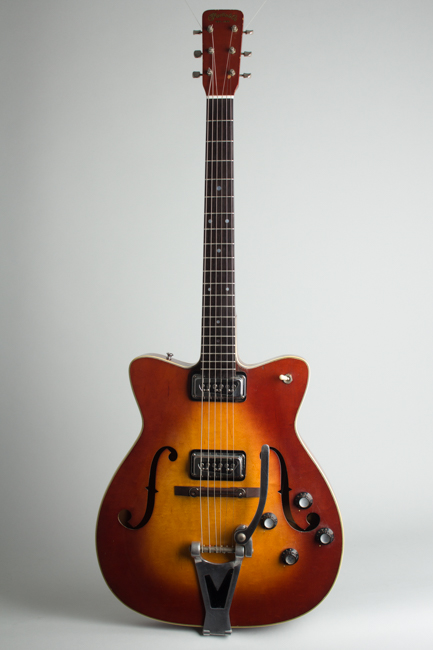 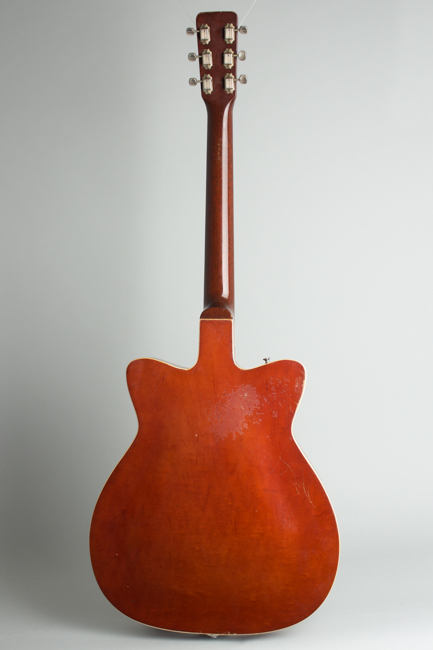 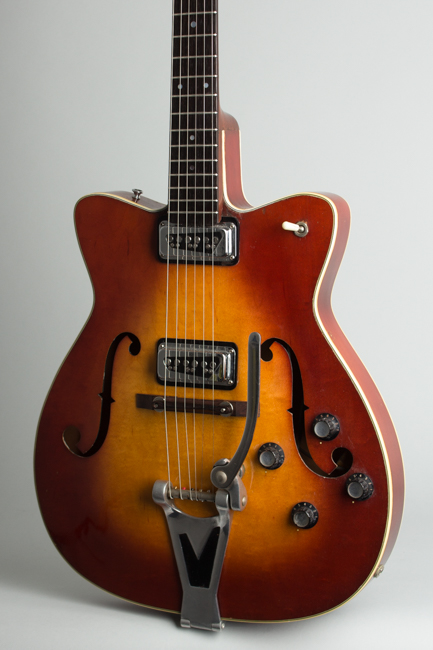 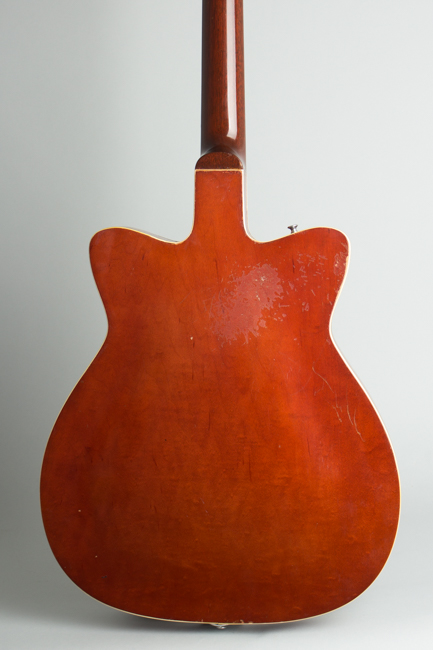 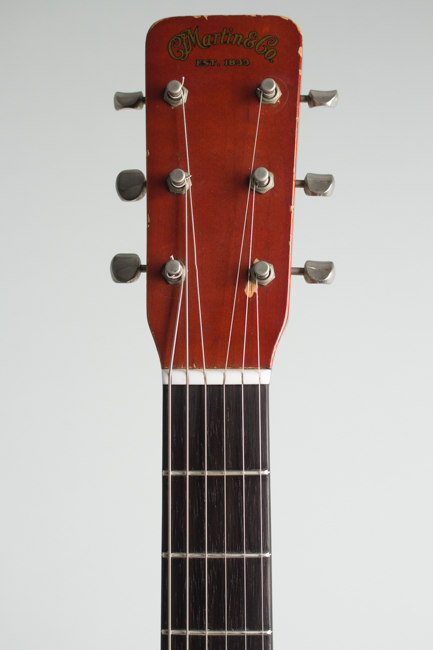 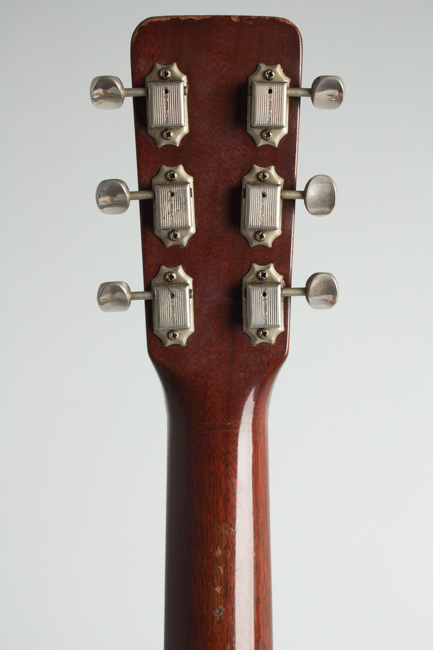 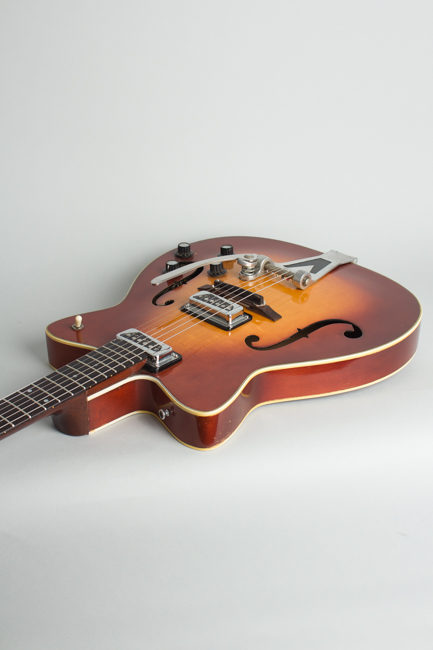 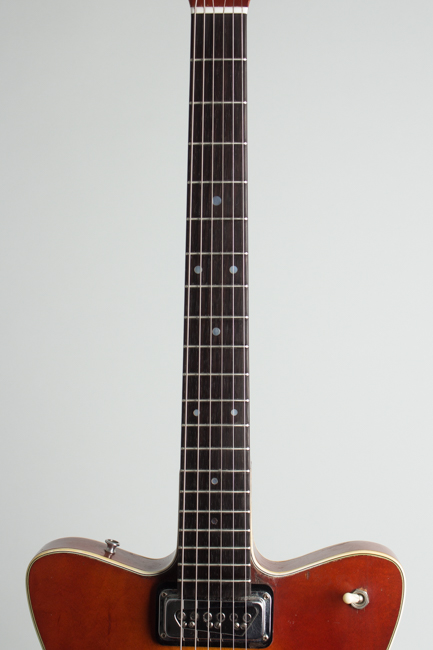 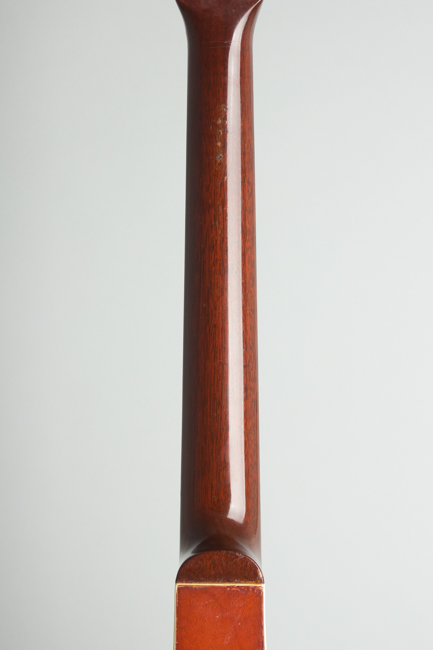 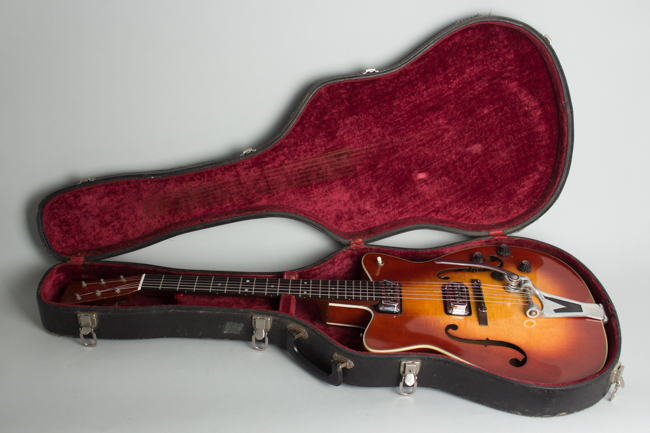 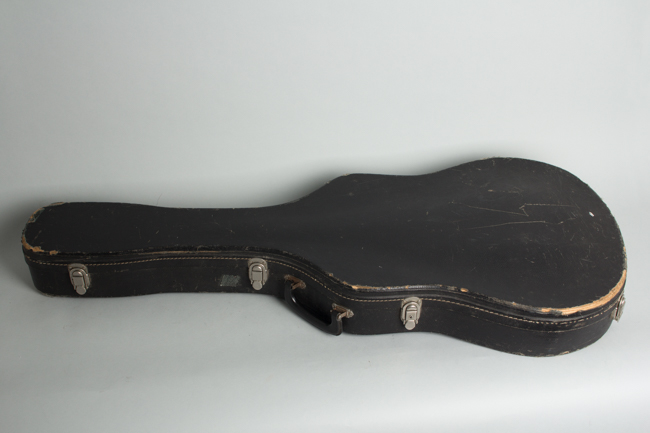 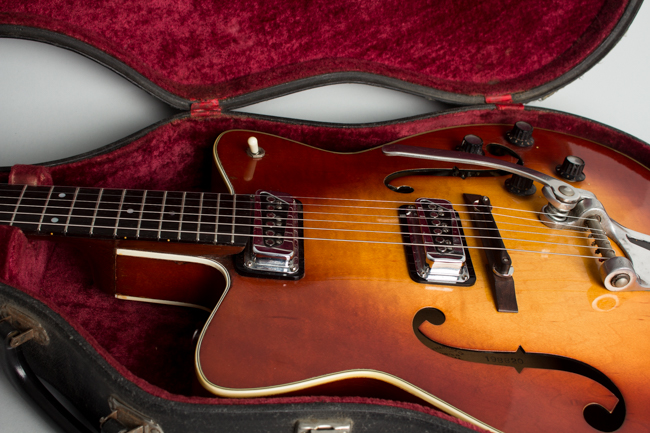 One of the top contenders for the most un-Martin like thing ever to emerge from the company's Nazareth PA factory, The thinline double-cutaway F-65 electric represents Martin's honest but ultimately doomed attempt to compete in the plugged-in market. Even in Beatle-saturated 1964 it became evident that Martin was not becoming a major player in the booming electric culture. Within a few years increasing demand for the company's Dreadnought flattops convinced them to give up the effort altogether. In 1968 even the Beatles bought themselves D-28's!

In the late 1950's the Martin must have felt an urge to get into the electric market, after pointedly ignoring it for more than 20 years. After a quixotic stab at fitting DeArmond pickups to existing flat top designs met limited success, the company plunged fully into electric mode with a 3-model thin hollowbody series announced in 1961. This F-65 was the top of the line, the only double cutaway model and came fitted with a custom Bigsby tailpiece and two DeArmond pickups.

The 2" deep sunburst-finished F-hole body is triple bound, the plain dot-inlayed fingerboard is unbound. The neck is slim and comfortable, with typical Martin contours. The headstock has the standard Martin shape and decal logo; it carries single unit metal-button enclosed Kluson Deluxe tuners. The wiring rig with a 3-way switch and individual tone and volume knobs is standard Gibson style. The vaguely "M" shaped specially made Bigsby tailpiece is the guitar's raciest feature, along with a bizarre clear Lucite plastic bridge that is almost always missing (it is gone from this one, as usual).

The pickup rig features two of the tried-and true top-line DeArmond's that were a 10+ year old design at the time, the wiring also supplied by Rowe, Inc. What did Martin know about wiring anyway? This same basic rig appeared on all Gretsch electrics until 1958, a number of Guild models in the early 1960's and several other lines in the late '60's including Standel and Kustom. These units give a well-defined h-fi sound with plenty of snap, and the F-65 sounds great, albeit in a rather 1950's way.

These guitars have been largely ignored and even derided since their short production run from 1961-'65. That said perhaps the joke is on us because viewed without prejudice, this is actually quite a good instrument! The craftsmanship is excellent as you'd expect from Martin, the thin body design is quite comfortable and the neck essentially the same as many much-loved Martin acoustics. The DeArmond "Dynasonic" pickups are the same as those on many great-sounding Gretsch and Guild guitars, albeit in a slightly different cover. While the styling might be best described as "conservative" (many cosmetic features are inherited from Martin's 1930's archtops) in sound and playability this is easily the equal of many Guild, Gretsch or Gibson models. Maybe isolated Martin electric users Johnny "Guitar" Watson, Skip Spence, the Music Machine's Sean Bonniwell and even (in the Rising Sons around 1965) Ry Cooder knew something after all…

This guitar shows some average wear overall but does not appear too heavily used. The most notable spots are some chips to the headstock, a few small dings to the back of the neck in the lower positions and some belt buckle wear into the back finish. The face is actually quite clean. The guitar has had a neck set at some point in the past; the work is solid but cosmetically somewhat messy around the heel area. It has also been refretted with wire a bit larger than the original.

The hardware is mostly original; as is often the case the quixotic Lucite bridge has been replaced with a wooden adjustable unit. The oddly-shaped pickguard is gone but all other hardware remains intact. The guitar plays and sounds well and still dwells in the original shaped HSC. Very Good + Condition.
×