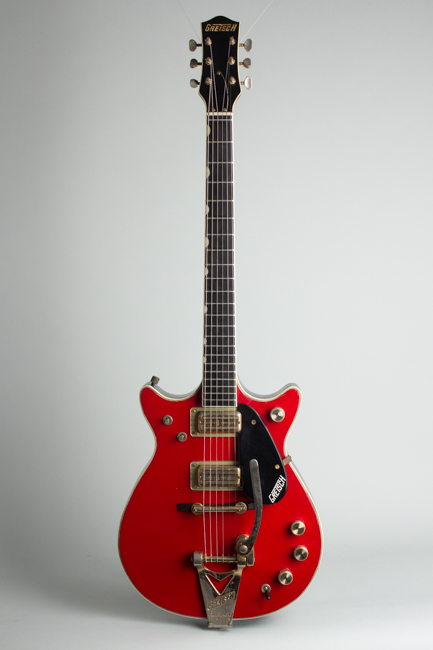 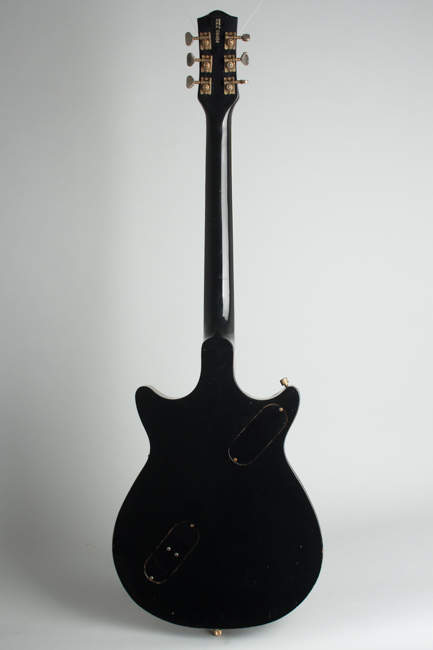 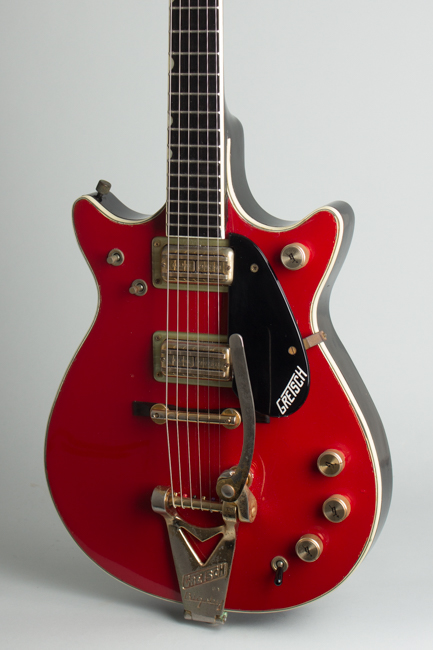 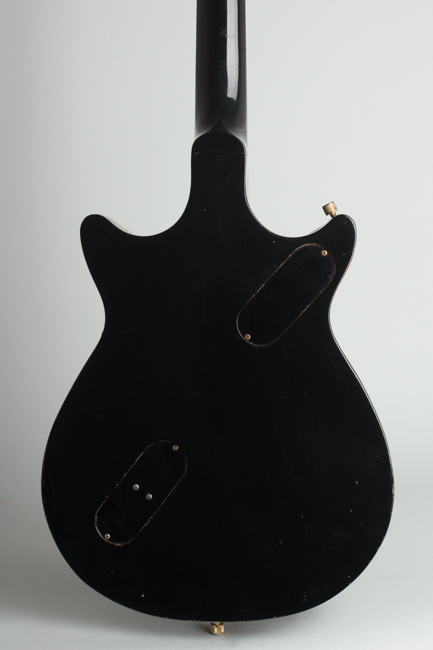 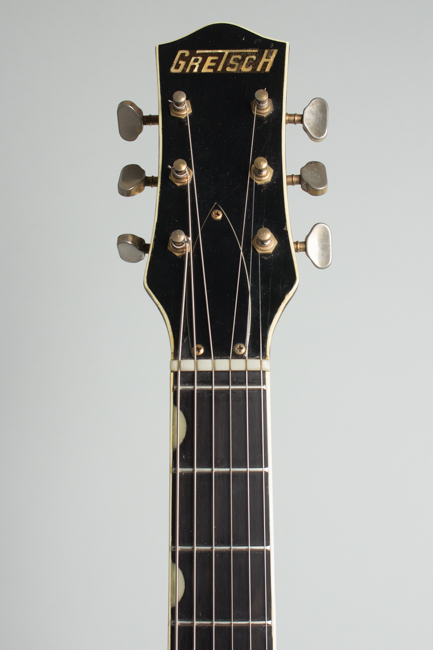 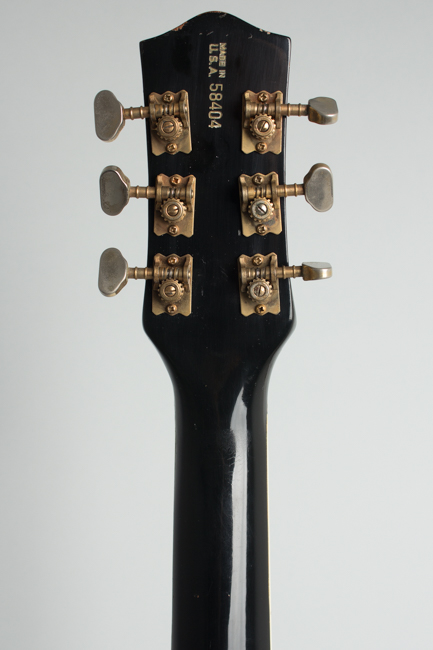 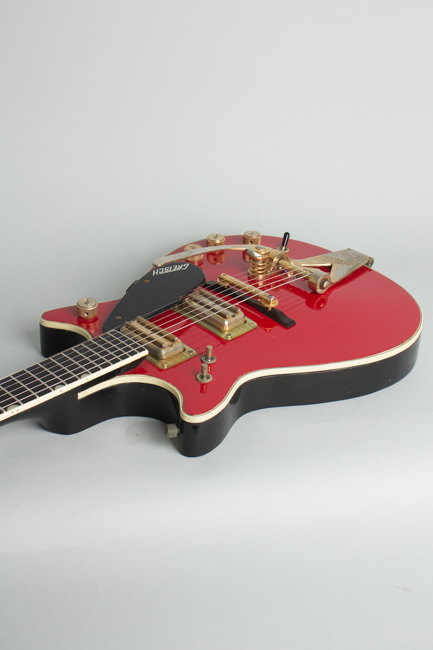 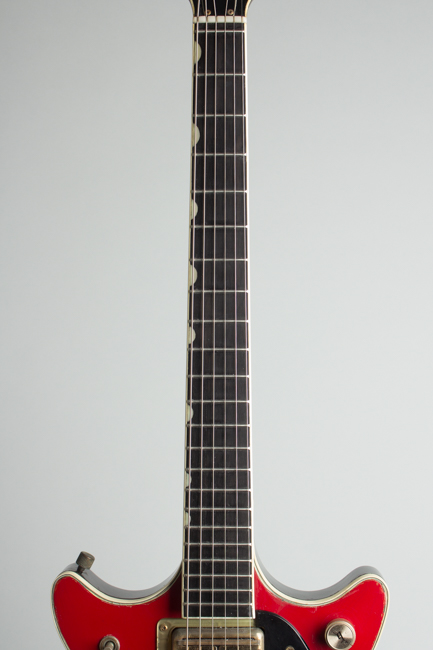 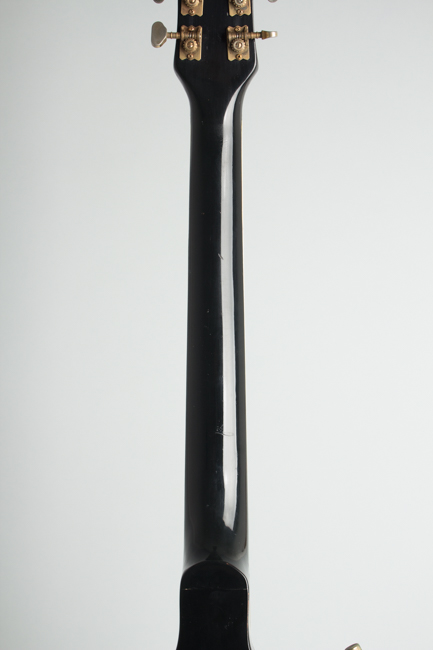 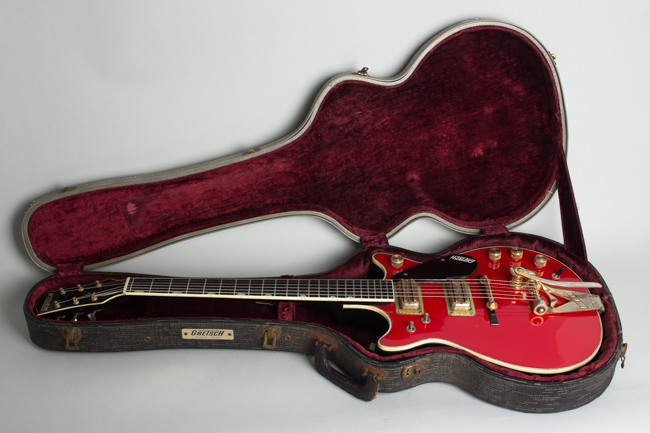 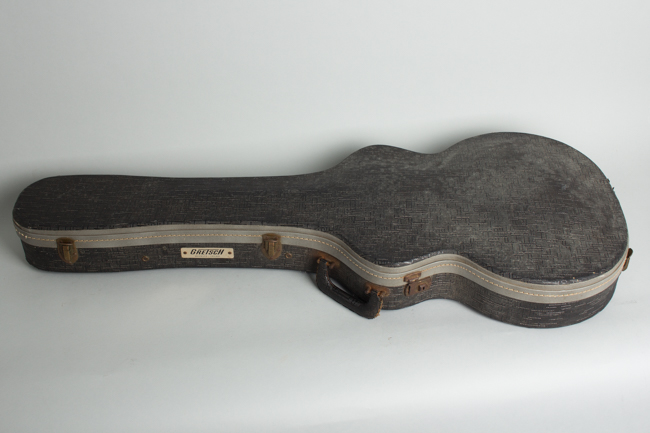 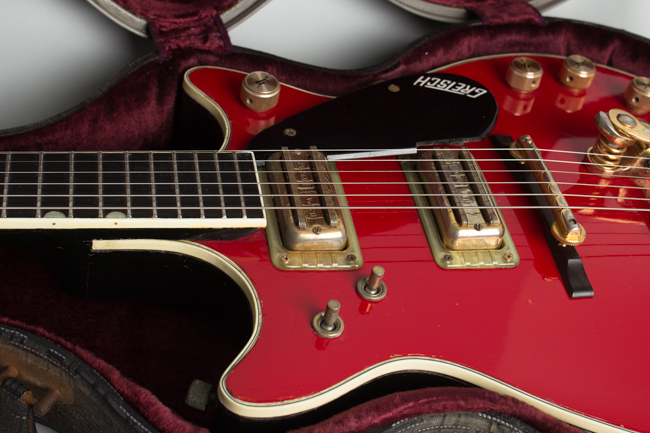 This 1968 Jet Firebird shows the classic features of this year, the waning season of the double-cutaway Gretsch Jet line. The "Jets" had seen many features continually updated since appearing at the end of 1953 as Brooklyn's answer to the Les Paul. Gretsch followed Gibson's lead again in late 1961, when a new double cutaway body style was introduced updating the guitar to a more "modern" '60s aesthetic. With a strong Beatles association Gretsch prospered in the guitar-mad mod 1960s. Still it was their larger hollowbody guitars that mostly shined; the company's solidbodies were left in relative shadow.

While the Gretsch Jet series were officially described as solidbodies they are actually more chambered semi-solid guitars, with a plywood top over a heavily routed-out body. The sound falls somewhere in between the typical Gretsch hollowbody and an actual solidbody guitar, with a lot of bite but more airy quality than a Les Paul. The Jet Fire Bird carries an "Oriental Red" finished top on a black body and neck, and was the favored guitar of Bo Diddley before he had Gretsch adapt the model into his signature custom instruments. These which had basically the same features except for much wilder body shapes.

The gold-plated pickups on this May 1968 guitar are the newer "Super 'Tron" humbucking units Gretsch introduced in the early 1960's, originally designed for bass. These use laminated metal bars instead of the Filter 'Tron's 12 adjustable polepieces, supposedly for a more cutting sound. To this end this guitar also has another short-lived feature, a battery operated treble booster built in. This appeared on a few models only in the late '60's, and has a somewhat gnarly sound when flipped on! It is engaged in the forward position of the standby switch, and has its own intensity control resulting in a new four knob, three-switch wiring rig.

Other features are more typically Gretsch including the small headstick mounting gold-plated Van Gent tuners, an ebony fingerboard with "thumbprint" Neo-Classic inlay and the new Baldwin-era "G" knobs first used in 1967. This guitar mounts a gold "Gretsch by Bigsby" tailpiece replacing the earlier '60s Burns tremolo unit, which was not a particularly popular fitting. This is paired with a gold bar bridge that is less common on Jets but does appear on some; by this period fittings on these were inconsistent at best.

The Gretsch jet series guitars had sold well in the 1950s, by the later '60s they seem to have faded from view. Examples from this period are fairly rare and few notable players appear to have used them at the time. The return of Gibson's original single-cutaway Les Pauls signaled another sea change in the guitar world, and by 1970 the Jets were restored to single-cut form as well. The '60s double cutaway Jet Firebird is now celebrated primarily due to literally lifelong use by Malcom Young as the engine of crunch to propel AC/DC to hard rock immortality. In recent years numerous Gretsch re-issues have proved their enduring appeal. The guitar remains unique, and this slightly tricked out treble-boosted '68 has a great sound and feel, as well as looking sharp as it gets!

This is a great playing and sounding Jet Firebird, with all the work needed to keep it running for the next 50+ years already put into it. It's become evident that the binding used on late 1960's Gretsch guitars is pretty universally deteriorating by now, and many have been rendered hardly playable as a result. This one has had both the neck and body rebound and so will not have any issues in that department, at least not for a long time. The work on the neck is cleaner than on the body, it is excellent looking and feeling and the original red side dots were retained and re-used. The body was done in grained ivoroid, there is some minor gapping and chipping visible but no overspray was done to the finish, just some small touch ups.

The finish overall remains original, with a well-preserved unfaded Oriental red top which shows minor checking, chips and dings as do the black back and sides. The neck finish is cleaner with just a few minor chips and dings. All hardware is original, the only thing replaced is the internal battery clip for the active treble boost, which still works as intended. The guitar has been recently refretted with the correct style wire and the fingerboard trued; the neck angle is excellent without ever appearing to have been reset. This guitar is about the best playing Gretsch Jet we have had from any era! It includes a nicely preserved original Gretsch two-tone case. Overall Excellent - Condition.
×