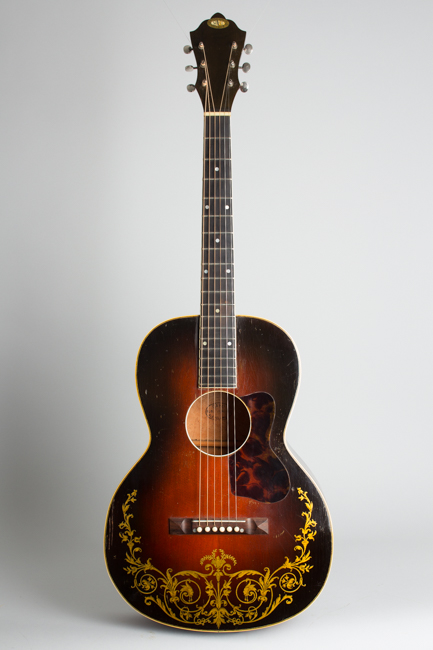 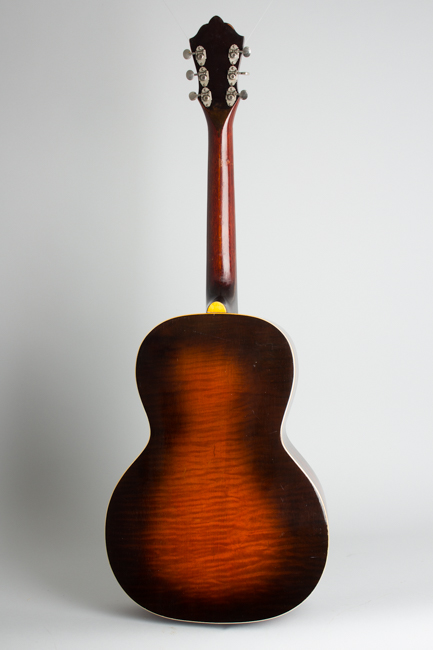 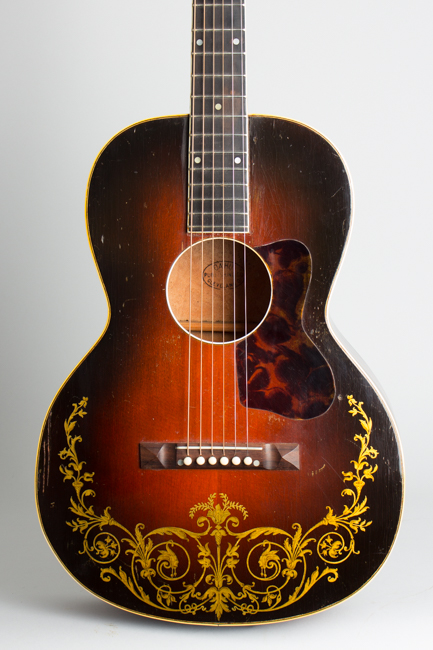 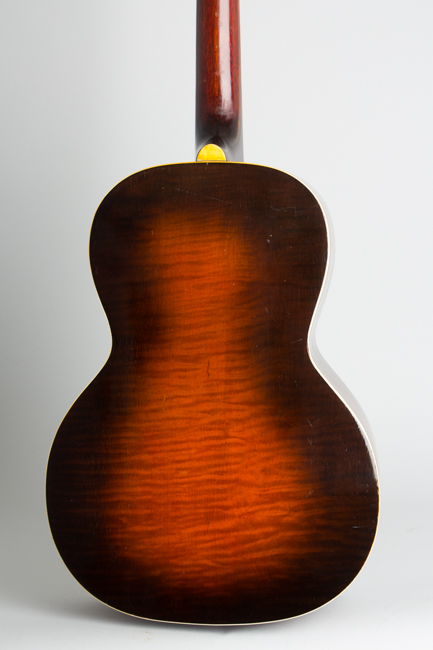 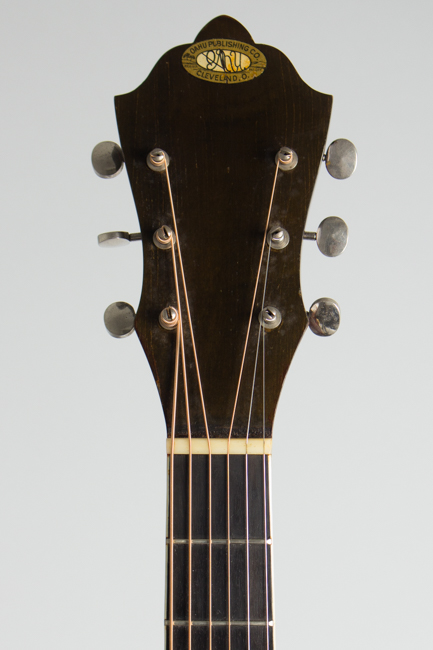 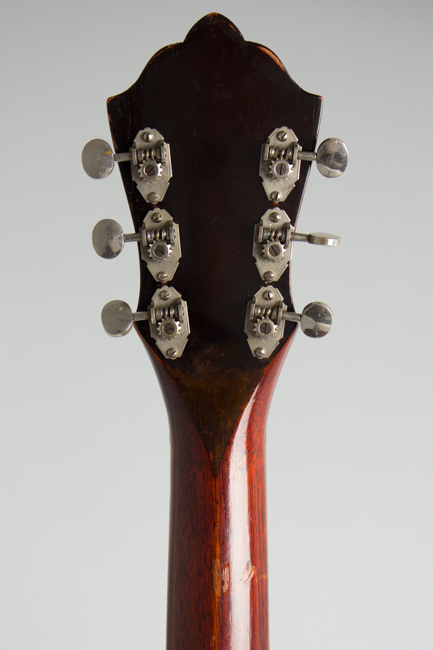 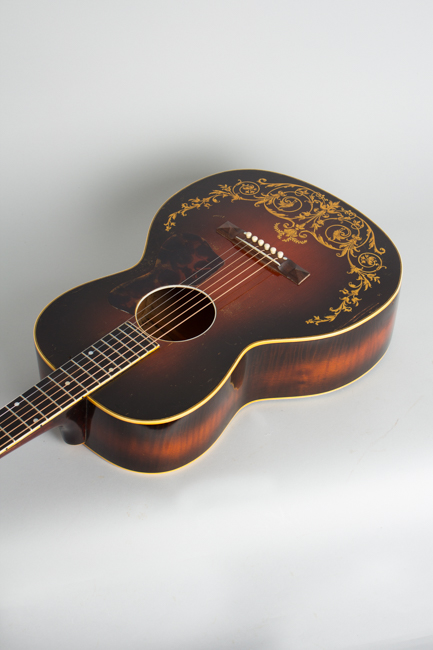 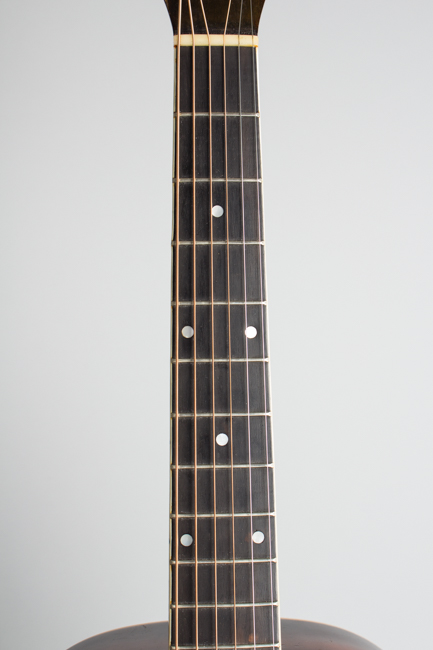 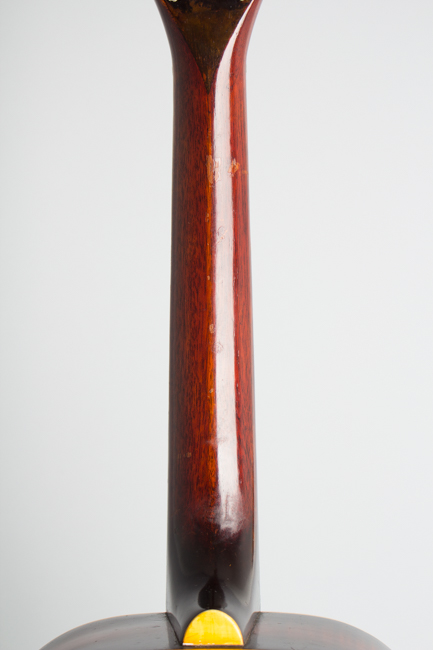 This very attractive 12 fret Jumbo Oahu flat top has undergone a conversion from its original Hawaiian setup to standard "Spanish" style. It is the earlier, 14 1/2" body version of the classic Oahu Jumbo with a factory X-braced top giving a much more sophisticated tone than the later, larger heavier ladder-braced examples. The body is unusually deep like Gibson's Nick Lucas Model which likely inspired this instrument somewhat. Like nearly all Oahu acoustic guitars, this Model 71K was actually built by Kay in Chicago.

Oahu brand product was originally sold only through a nationwide network of guitar teaching studios, usually on a time-payment basis. This model listed at $98.00, quite a sum in the late 1930s, but would have been offered on an installment plan along with the weekly lessons. It was touted as a fully professional grade instrument, and usually after a student had shown some real promise the teacher would try to persuade them (or their parents) to upgrade whatever they started on to this obviously higher end and fancy-looking guitar.

The dark sunburst top is ornamented with an elaborate gold scroll decoration, and the flame maple back and sides are subtly sunbursted as well. The elaborate headstock shape is a trademark of this model. This instrument was in the highest echelon of what Kay in Chicago could build, and is a very nice example of one of the 1930s' more distinctive guitars. While very few folks still play an instrument like this in the originally Hawaiian style, it makes for an excellent conversion to standard, giving the guitar a whole new life.

This guitar has had a nice conversion to Spanish style for standard play; the previously square neck has been rounded down to a deep "C" profile with a period style refret and arched fingerboard. The guitar body remains as built with some light finish wear, but no major signs of use. Even the oft-flaking decal logo on the headstock and gold leaf body stenciling is largely intact.

The original tuners (openback Grovers with the very first Safe-Ti-String style posts) are present and functional. The rosewood pyramid bridge is fully original with a new saddle; it has not been cut down or altered. A small glued-down tortoise celluloid pickguard has been added to the top; originally this guitar had a floating pickguard prone to rattling that was nearly always removed.

This is a striking-looking and powerful-sounding prewar guitar, with a nice maple bite underlaid with a richer response due to the deep body and X-braced top. It is currently tuned in D and has a spectacular deep yet well-defined sound in this lower register. The guitar comes housed in a more modern HSC. Excellent - Condition.
×