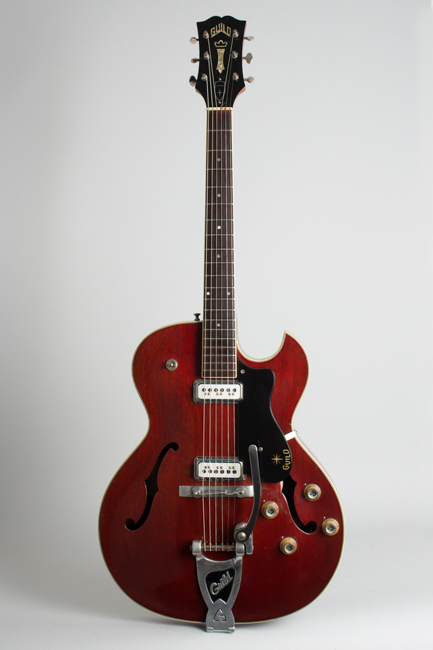 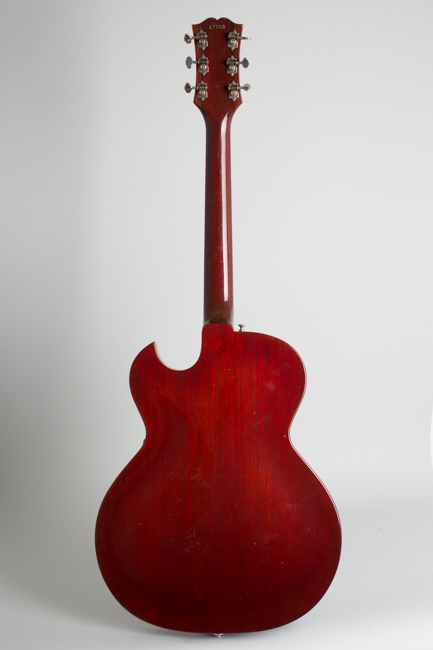 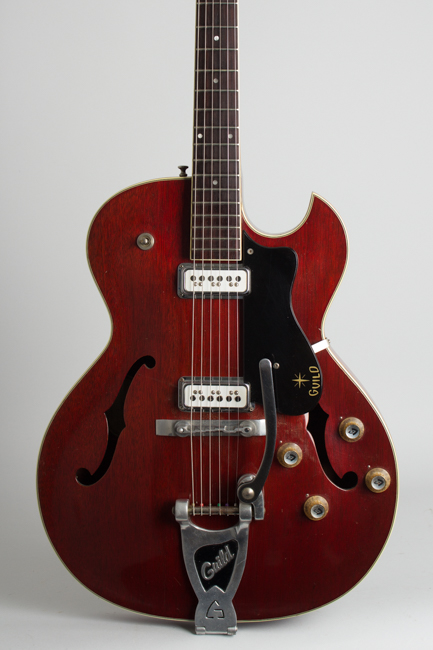 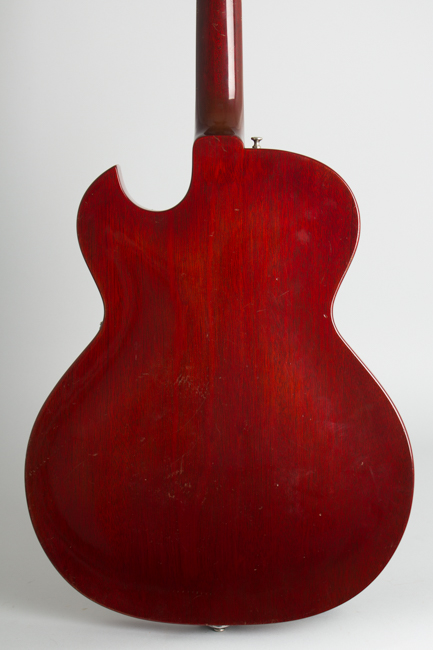 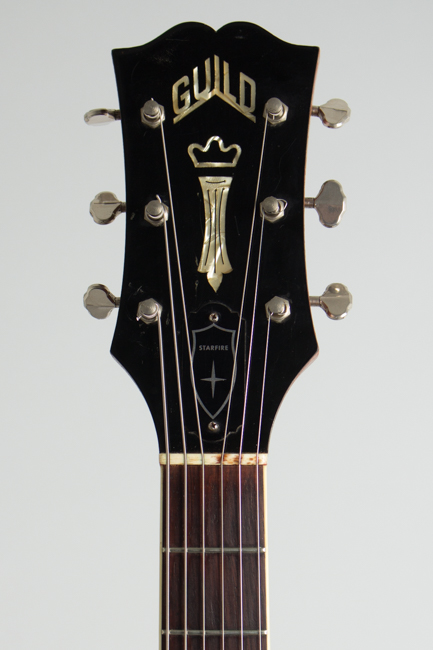 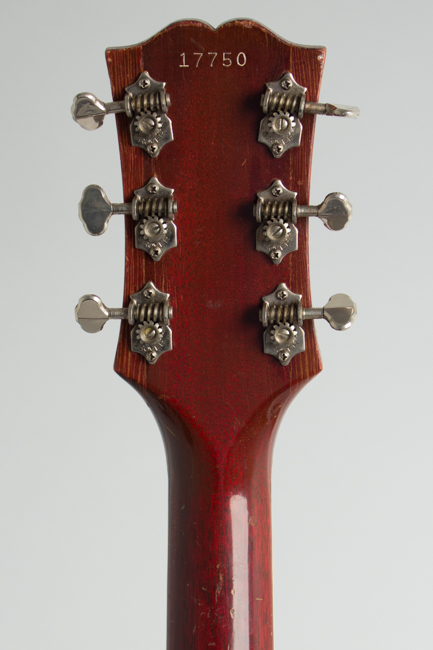 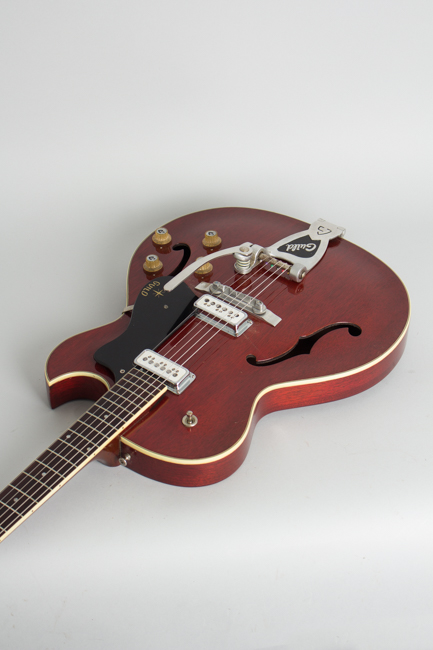 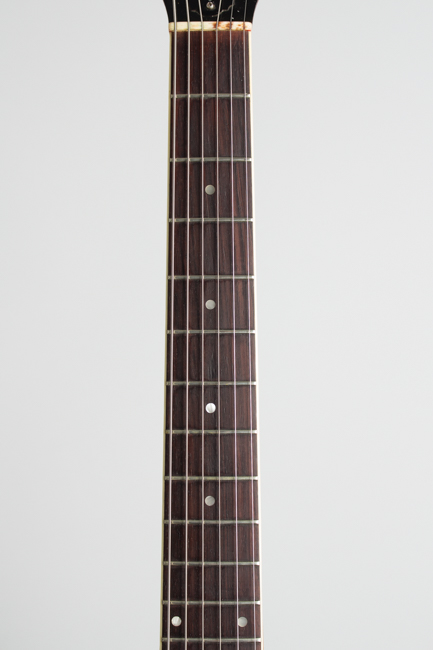 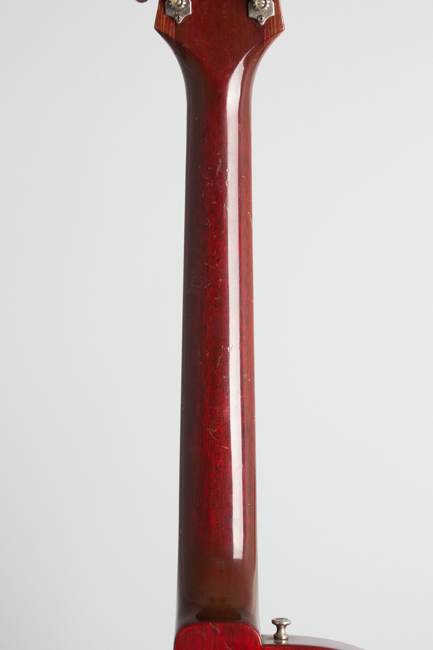 This is a superb early example of the Guild Starfire III, the original "top of the line" of this long-running series. The thin hollow and semi-hollow body Starfires have been Guild's most consistently successful electrics since their introduction, and 1960s models are some of the finest of their type. This guitar dates to the second half of 1961...the first Starfire models I and II were introduced in summer 1960, with the III added to the line slightly later.

The Starfire III was the most expensive of the series at the time. It was the same thinline, single cutaway, double pickup guitar as the Model II with the addition of a Bigsby vibrato tailpiece and bridge. This guitar mounts a pair of white-topped DeArmond pickups, the same as Gretsch famously used in the 1950s except for the color of the plastic faceplate. These pickups were only used up into 1963 before Guild substituted their own new humbucking units. The medium dark cherry finish body is faced with mahogany, with a triple-bound front but unbound on the back. The mahogany neck has a single-bound, dot inlaid rosewood fingerboard.

This is a very classy and versatile thin-body electric; a particularly nice example of one of Guild's finest designs. The sound is comparable to many 1950s Gretsch models and compared to many of these and similar vintage Gibsons, the Starfire remains a rather undervalued guitar. We'd rate this as one of the nicest early Starfires we have had; a splendid early example of one of Guild's classics.

This is a lovely all original guitar, with some general light wear but no repairs or modifications. All finish and hardware are original, and the cherry seems to have faded only slightly over the years. The bone nut has some staining to the top where some strings must have rusted long ago. There are some small scratches and dings and a bit of finish discoloration around the bridge but really overall this is a very clean guitar. The frets and fingerboard show some very light wear. The DeArmonds give this Starfire a brighter, more cutting sound than the later humbuckers while still able to dial down to a jazzy purr if desired. A really nice SF III, equipped with a modern HSC. Excellent + Condition.
×