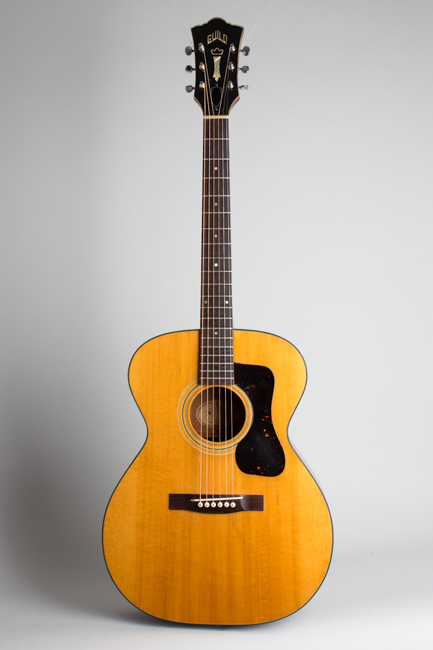 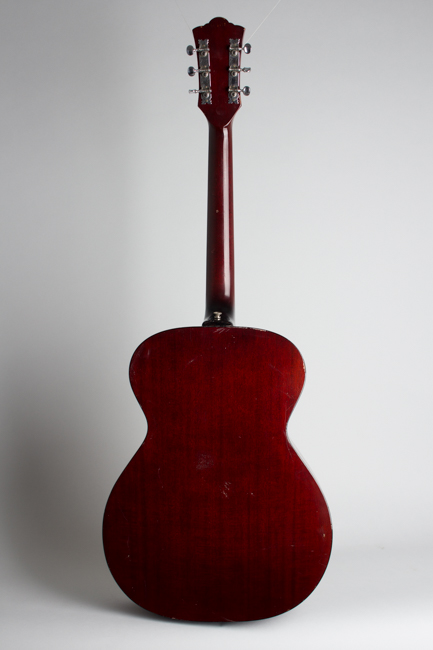 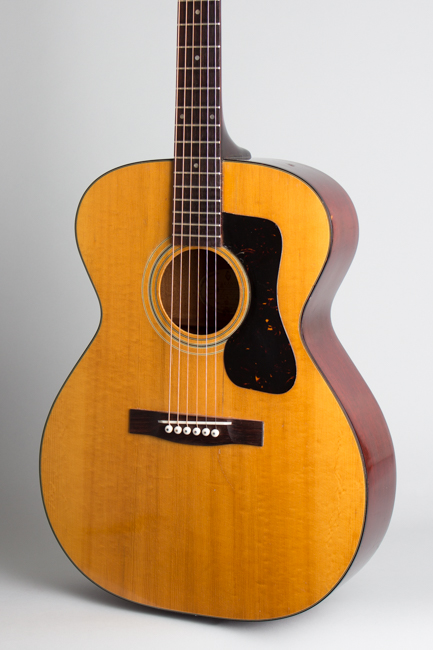 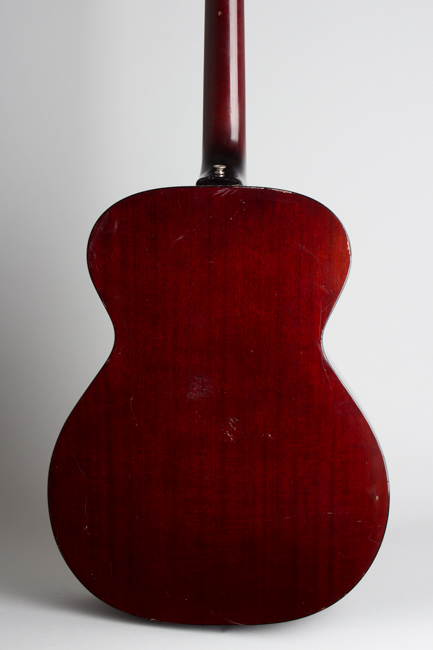 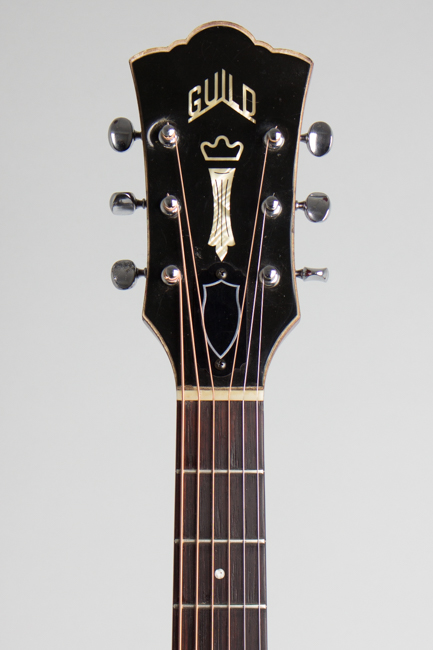 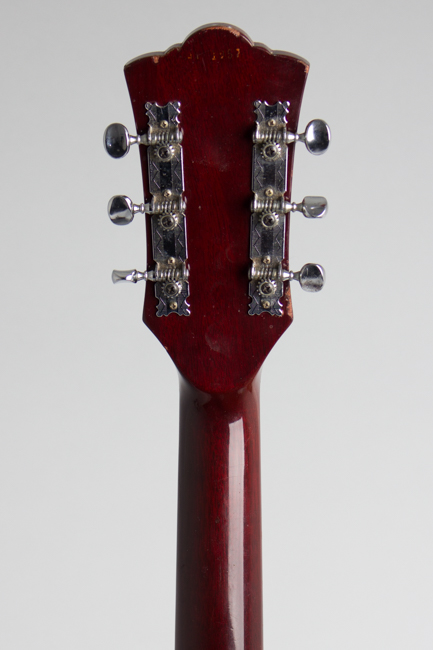 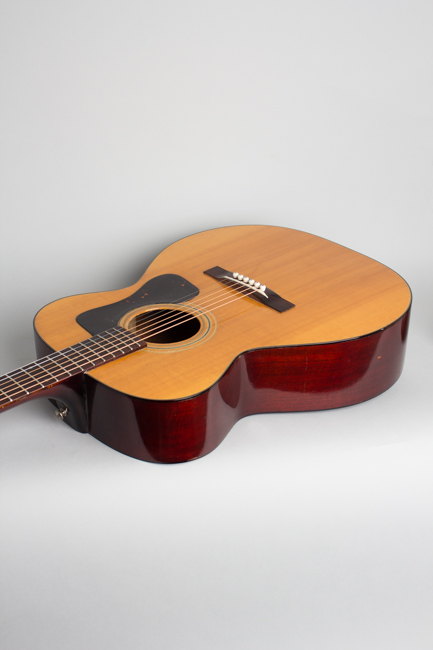 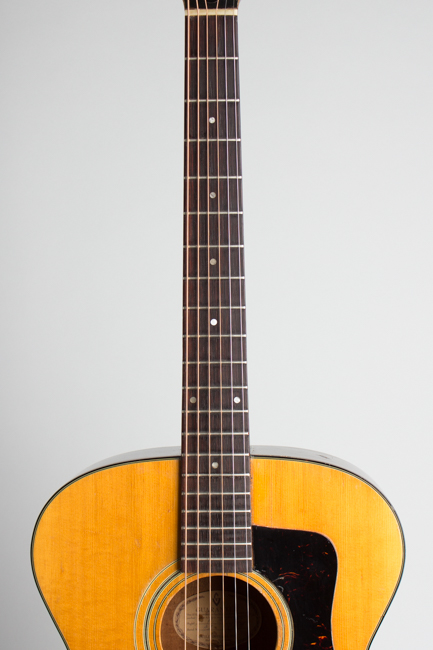 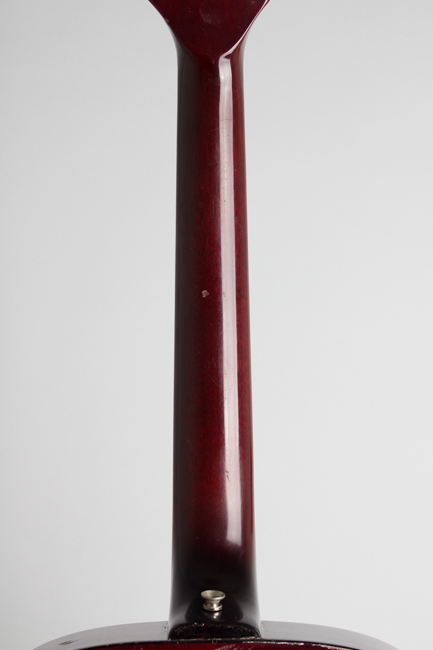 Good examples of the often very fine-sounding Guild flat-tops of the 1960s can be surprisingly hard to find these days, despite their being a popular choice at the time. This is an early 1968 F-30NT, around one hundred numbers after the last recorded shipped in 1967. The "NT" designation indicates the natural-top variation of the F-30 (the other was sunburst). The F-30 is a 15" wide thin-waisted guitar with a mahogany body and a spruce top. It was the midline, mid-size model in Guild's line, cited above the smaller all-mahogany M-20 (famously regarded as the "Nick Drake" guitar) and F-20, the same size and shape with a spruce top.

This F-30's features are typical for the era, with a mahogany back, sides, and neck, spruce top, and rosewood bridge. The neck is slim and comfortable with a dot-inlaid rosewood fingerboard and headstock faced in thin plastic with the Guild name and "Chesterfield" column inlay. The narrow-waisted body makes for an easy handling guitar; this model was most identified in the 1960s with Mississippi John Hurt and Paul Simon.

This is an extremely well-built and quite responsive guitar, much lighter than Rhode Island-made 1970s Guilds and easily on par -- or better -- compared with similar size Martin or Gibson offerings from the same era. The F-30 is similar in size to a Martin 000, and makes for a smooth finger or flat-picking guitar with a vibrant midrange sound which works equally well as a strummed chord machine.

Overall length is 41 in. (104.1 cm.), 15 1/4 in. (38.7 cm.) wide at lower bout, and 4 1/4 in. (10.8 cm.) in depth at side, taken at the end block. Scale length is 24 3/4 in. (629 mm.). Width of nut is 1 5/8 in. (41 mm.).
This is a overall nice example of a natural-top 1960's F-30. It does showing some light wear and old repair but is generally well preserved for its 50+ years on the planet. The natural lacquer finish has signs of wear including small dings, dents and scratches but no large areas of loss; the top is cleaner than many. The lacquer is bright, unfaded and hardly checked at all. There are two repaired spruce grain cracks to the top, one in the typical spot at the top edge of the pickguard and another running from its forward edge to the front rim. Both are solidly sealed up with no added finish. The top remains in excellent shape with none of the bellying sometimes encountered on these.

As is often the case with Guilds of this era the plastic headstock veneer has shrunken slightly all around (almost giving the appearance of a bound headstock!) and is a somewhat puckered above the top tuners but has less lifting than many. This guitar has had a neck reset which is a rather difficult and often expensive procedure on these. Probably during the process there was a heel crack, which has been neatly repaired but visibly oversprayed, with the heel area only having a darker opaque overcoat. There is also a strap button added to center of the heel. On the plus side the guitar now plays better than it did even back in the 1960's, with a very comfortable low action. This is not the cleanest of these excellent and often under-appreciated Guilds we have ever had, but possibly the best playing one and a fantastic sounding example as well. Excellent - Condition.
×