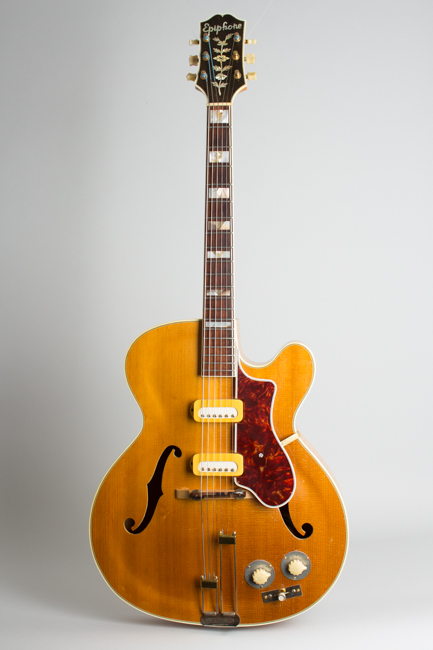 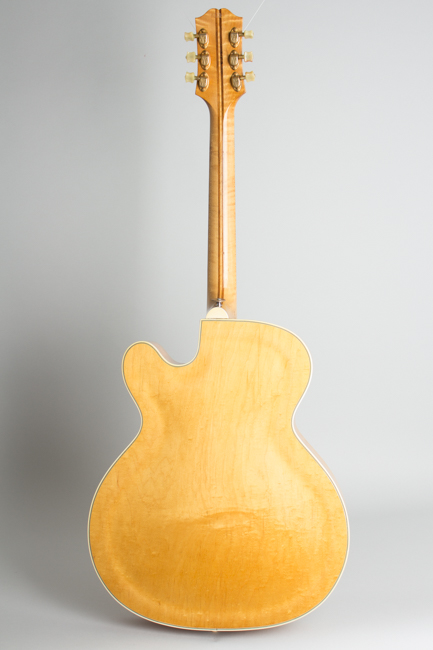 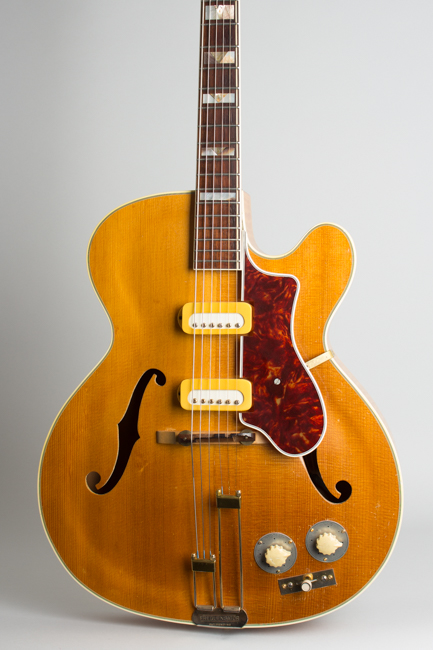 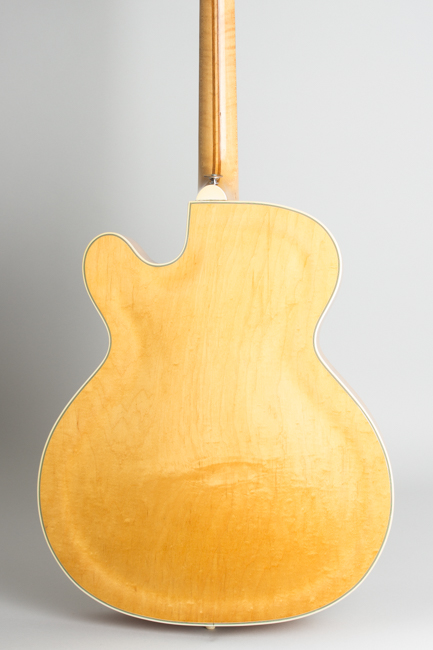 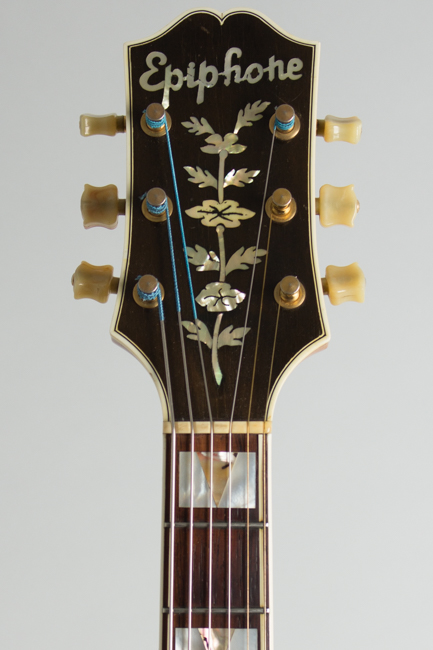 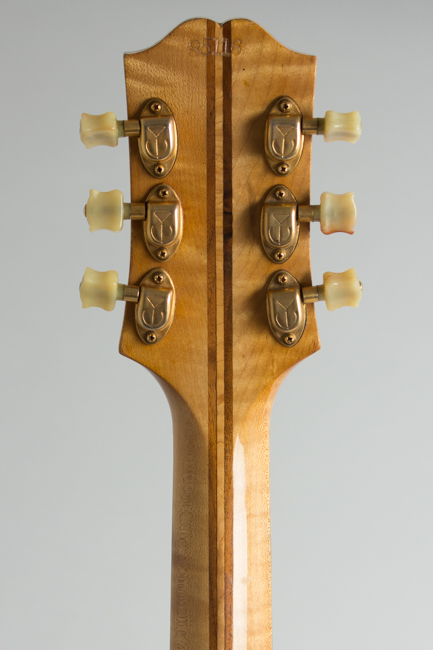 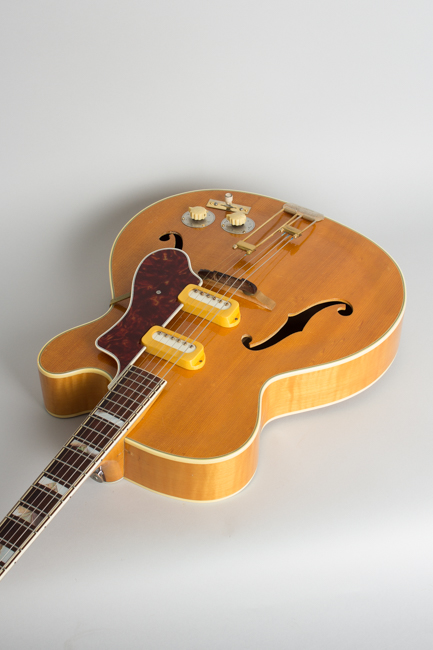 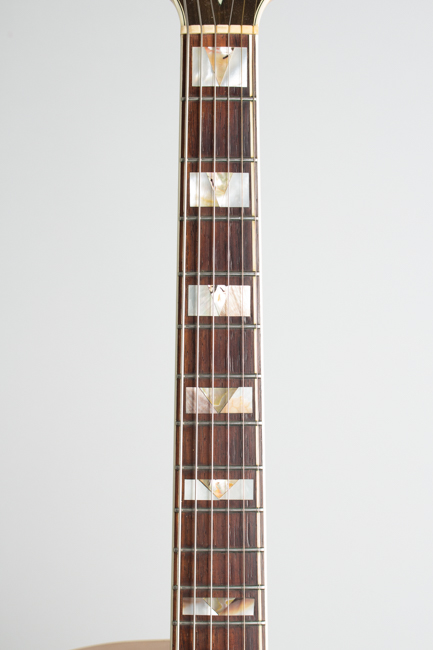 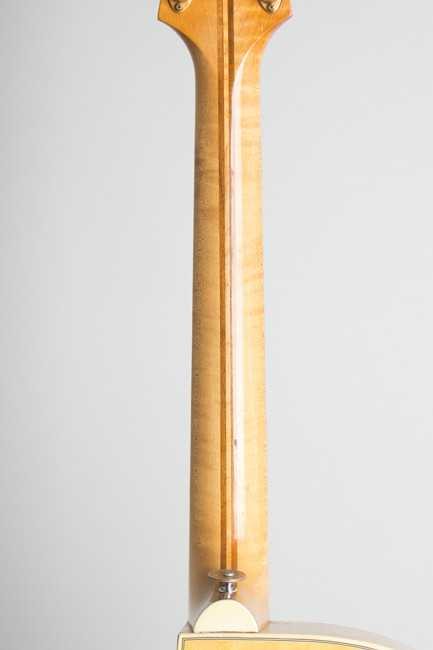 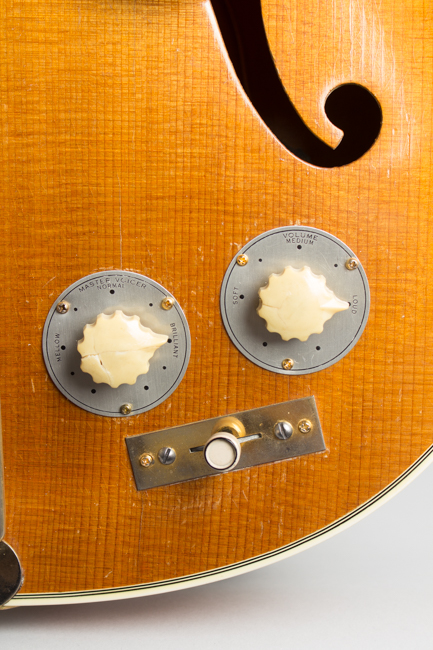 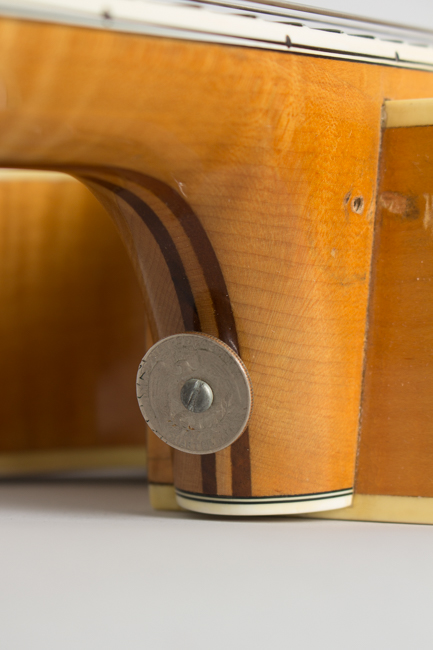 The large and very fancy Zephyr Deluxe Regent, introduced in 1947-8, was originally the top of the line New York-made Epiphone electric guitar. While in 1950 the company upped the ante with the even grander 3-pickup Emperor Zephyr Regent, the Deluxe model remained a high-end and popular guitar. In many ways it was the best instrument the company fielded, less cumbersome than the Emperor and a worthy competitor to Gibsons of the era. Cal Maddox of the Maddox Brothers and Rose used this exact model extensively at the time of band's greatest success in the early 1950s.

This is a full 17.5" two-pickup archtop with quite fancy trim, including 5-ply body binding, a multi-bound vine inlaid headstock, and split abalone/pearl blocks on the fingerboard. This model has the older style "thrust rod" neck reinforcement which is adjusted at the base of the fingerboard. The laminated maple body has a spruce top and carries a lovely honey-natural finish, showing off the back and side grain to good advantage. The neck has a soft "V" profile and is fairly slim for this period.

The pickups are Epiphone's early single coil "Tone spectrum" units, with adjustable poles and mounted in unique amber plastic covers with white faceplates. Some consider these superior to the later metal cased units that replaced them after 1948; they are fairly low output but have a nice acoustic quality to the tone, and still wind up convincingly through a cranked amp. The controls are a master tone and volume with metal plates around the base and a large 3-way lever selector switch mounted near the lower body edge. The tone control is labeled "Mastervoicer" and helpfully notes the settings as "Mellow", "Normal", and "Brilliant". This superbly attractive Deluxe is still housed in its original hard shell case, a lovely find from the early post-war heyday of big box guitars.

This guitar is in very fine condition overall, the nicest of the early 1940s era version we have ever seen. The binding shows no deterioration at all, which is a fabulous find for an electric Epiphone of this period. The finish has some light checking and small dings and dents, but overall does not show a lot of signs of use. The only thing replaced is the small screws holding on the plates for the knobs and switch...all else remains original. The knobs themselves have some old cracks in the plastic and have been reinforced from the underside with glue.

The frequensator tailpiece does not appear to have ever had any repairs, which is rare on older Epiphones. The original frets show some light wear but the guitar plays excellent, with none of the neck angle issues that often plague this model. The only oddity is a strap button added to the heel with a retainer made out of a quarter; we like this one so much we left that improvisation in place. There is a small hole for another strap button on the side of the heel as well. This is a great guitar for period R&B and Hillbilly styles, and just a lovely reminder of the glories of the original New York Epiphone company. Excellent + Condition.
×