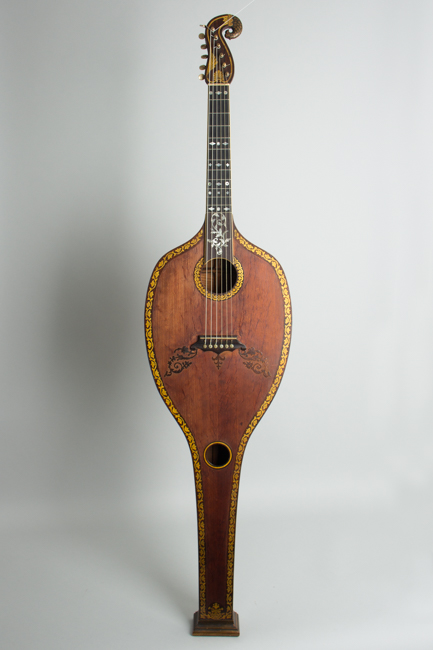 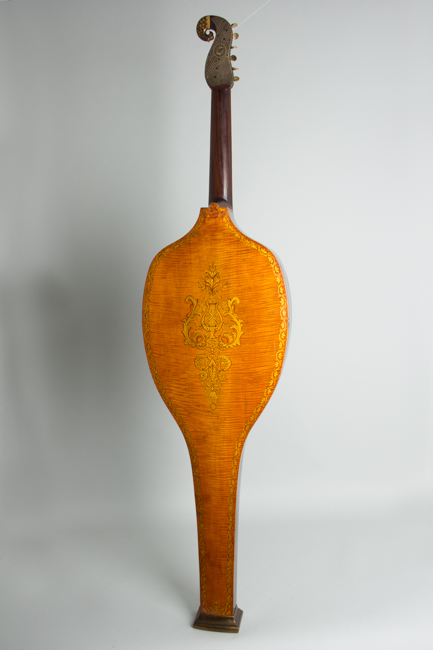 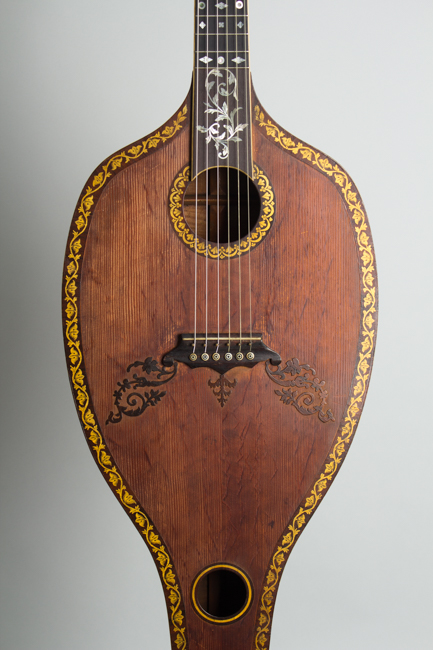 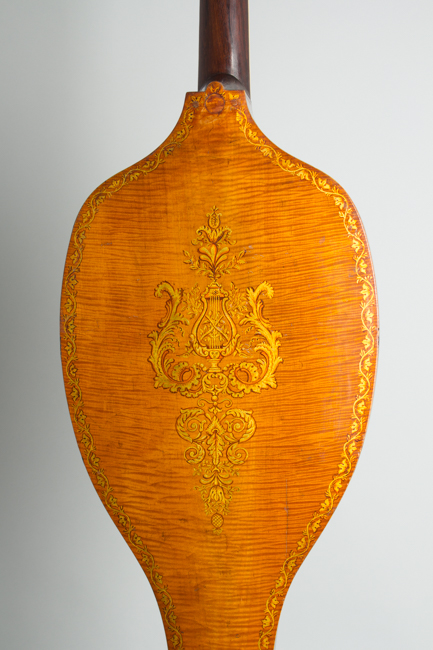 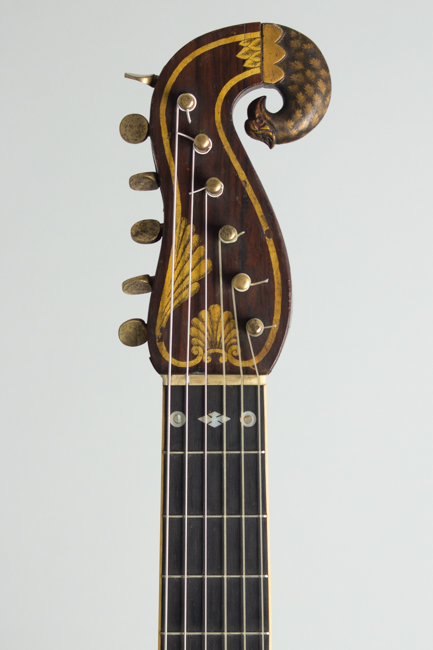 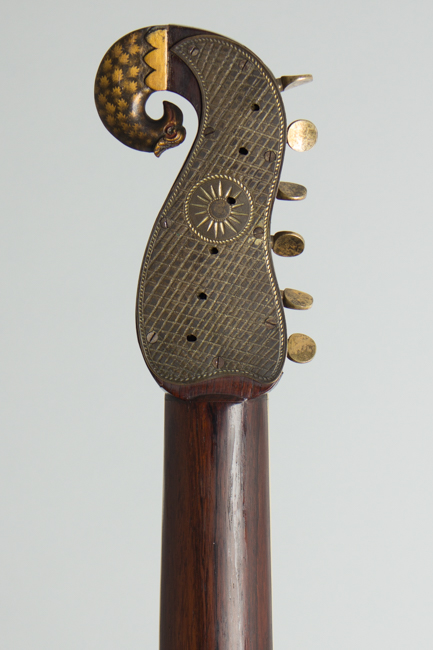 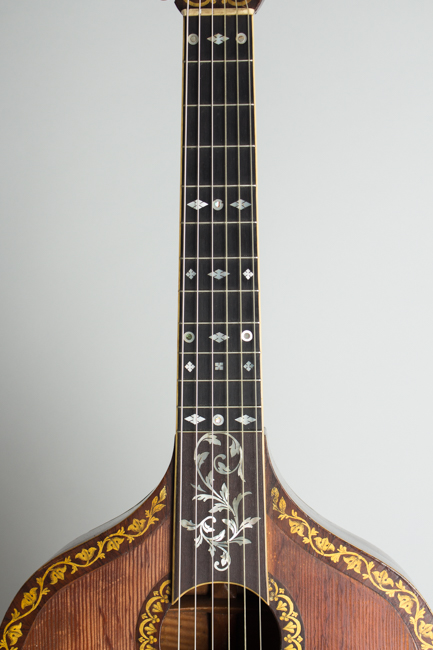 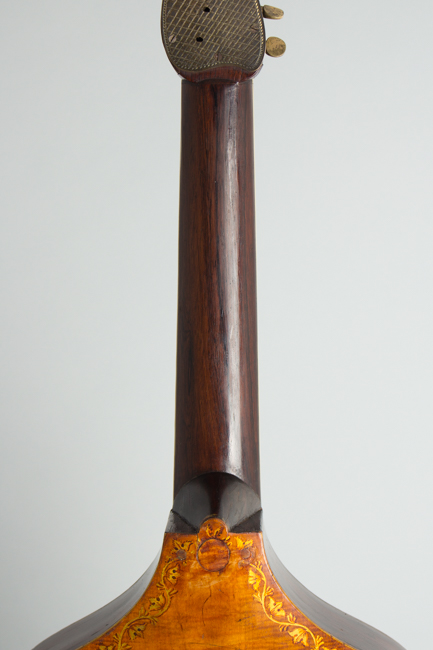 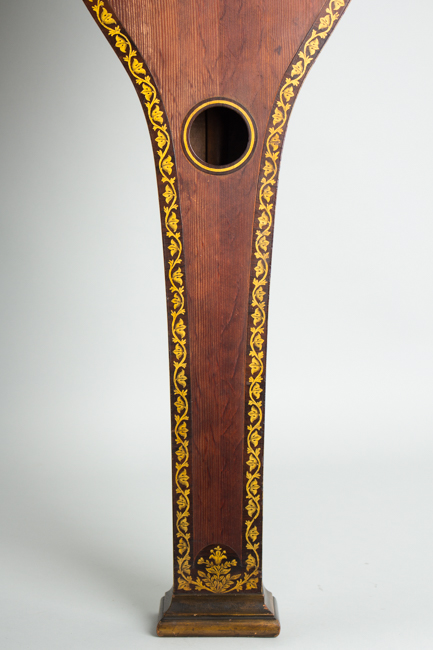 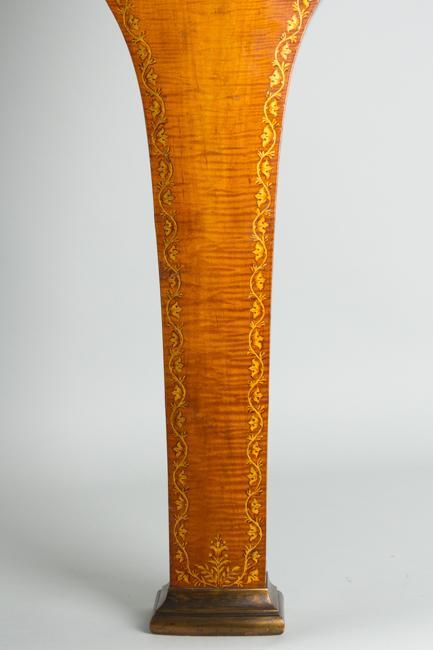 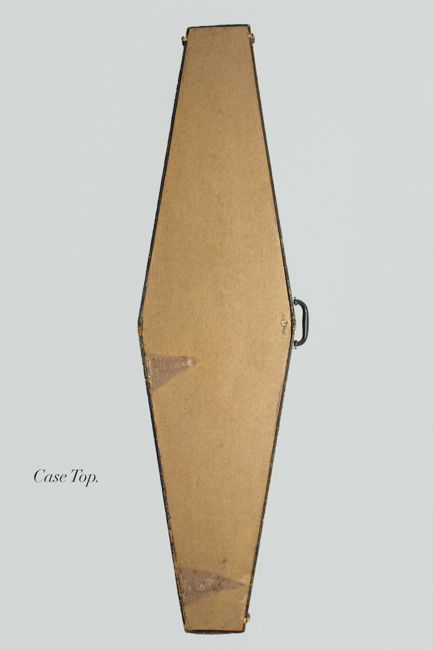 In the early 19th century, there were a lot of ideas floated on how to improve the recently developed 6-string guitar and make it louder, with a sound able to carry in large halls. Piano and organ maker Emilius Nicolai Scherr, a German immigrant who arrived in Philadelphia in 1822, offered one of the most beautiful if outlandish-looking variations on the format.

Scherr's "Patent Harp Guitar" bears no likeness to later instruments associated with that name, which typically feature extra strings above or mostly below the normal guitar range. His instrument is built with a vastly enlarged body, with a hollow pedestal extension below the bridge and base that rests on the ground. In that, at least, it somewhat resembles a harp!

Scherr is the earliest known patent holder for a plucked string instrument in the United States. This document covers the overall design, specifically the lower extension. This was intended to support the guitar, relieving the player from having to hold it in the lap and resting the back against their body, which Scherr claimed muted the tone. The scale is short at 22 inches, and the actual playable section is fairly small in the overall outline of the body. This may have been intended as a terz (higher tuned) guitar, although it plays very nicely in standard tuning today. There is no label present in the instrument, but it is undoubtedly one of Scherr's creations...as far as is known, nobody else even attempted to copy them!

Prior to the discovery of this instrument, only 8 previously known examples of these guitars had been documented. Three of these feature similar elaborate Federal Style gold leaf and ornament like that sometimes found on contemporary high-end furniture and instrument cases. Other known examples adhere to the more austere Austro-German aesthetic -- ebonized necks, herringbone inlay, scroll headstock, and figured maple back and sides. Interestingly this guitar bears a combination of features found on both early and later instruments, indicating it was possibly a transitional model or a one-off custom order.

Of the known examples of Scherr's Patent Harp Guitars, this is by far the most lavishly decorated, a showpiece of engraved pearl, fine wood inlay, and gold leaf. The entire borders of the top and upper sound hole are decorated with beautiful floral gold leaf work, as is the curly maple back. The fingerboard features likely later floral and pearl inlay, which is beautifully executed. The bridge is a decorative carved block of ebony with lovely floral scroll work of rosewood flourishing from each corner and unusual decorative bridge pins. The spruce top is stained dark with a dramatic "bearclaw" figure to the wood, while the gently arched back has a fantastic flamed grain to the maple.

The elaborate scroll headstock is fitted with typical internal-gear Stauffer-style tuners, decorated with gold leaf on the face and terminating in a lovely carved eagle head curling over the treble side. The neck is crafted from solid rosewood with an ebony board and typical 19th century "ice cream cone" heel. One other Scherr guitar in the collection of the Museum of Fine Arts Boston features many of these same features, although it deviates by having a slot headstock with two eagles and a rosewood back.

Many of Scherr's known instruments are remarkably similar in details and quality of workmanship to early guitars labeled Martin and Schatz, indicating it is possible there was some connection between these makers. This particular example doesn't bear much resemblance to Martin's work, possibly indicating it is an earlier build. C.F. Martin arrived in the new world some years after Scherr, who would have already been an established builder when Martin was just setting up his business in New York.

While Scherr's idea for the extended guitar never caught on, the actual instruments built to his patent remain some of the loveliest and most imaginative of all 19th century American guitars. The larger body cavity and dual sound holes give this instrument an impressive depth of sound, especially considering the short scale length. Although unconventional in the extreme, this is a fully playable instrument and a spectacular museum quality piece; in terms of ornament, at least the finest of these extremely rare pieces of playable Americana that has ever been found.

Considering its age (close to the 200 year mark), this guitar remains in remarkably fine original condition with typical wear and some old repair. The finish overall shows dings, dents, and scrapes, but no major areas of loss. The gold leaf is wonderfully preserved on both the top and back of the instrument with only minor loss.

There are one large and two small plugs by the heel on the back of the instrument and evidence of some splitting at the neck heel, indicating the instrument had a neck set or similar repair at some point. The work appears to be quite old and completely solid. The bridge has been reglued and has some repaired cracks, but remains solid and functional with its original bone and ebony bridge pins.

The top and back have no cracks; the sides show evidence of minor crack repair. The pearl work on the fingerboard was likely done later, as this elaborate pearl inlay is generally found on instruments from later in the 19th century through the 1920s, and not on any other examples of Scherr's work. The entire fingerboard may have been replaced (probably 100 or more years ago), as it features celluloid binding instead of the bone or ivory that would be expected in the early 19th century.

Despite the evidence of repair, overall this is a remarkably well-preserved example of these exceedingly rare and beautiful instruments. It is fully playable and sounds beautiful, with a dark and lush tone that is quite unique. An early 20th century handmade case is included that is functional for storage, at least. Overall Excellent - Condition.
×