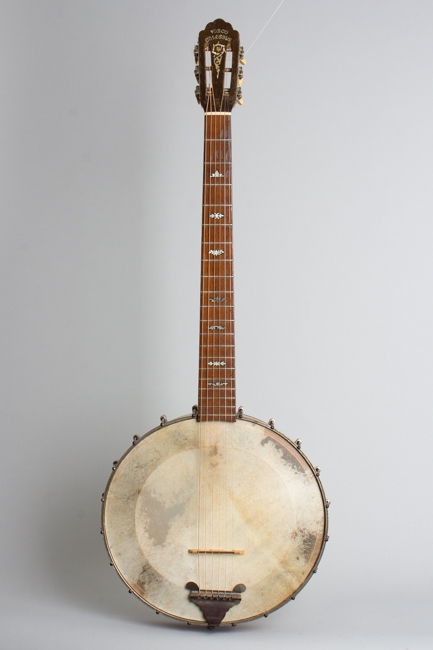 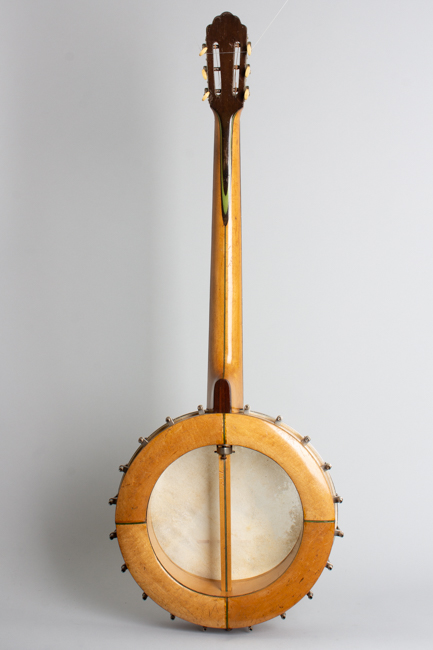 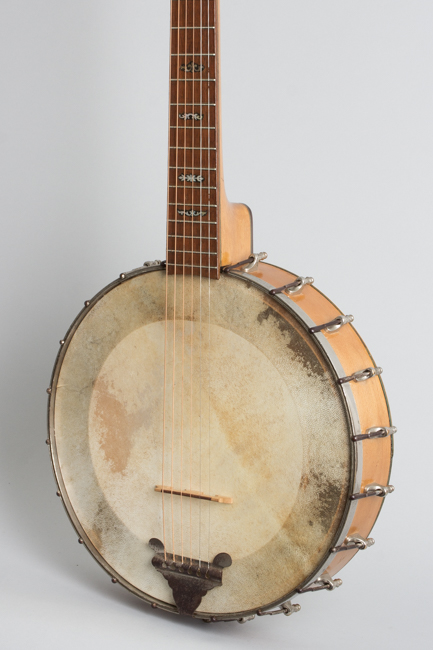 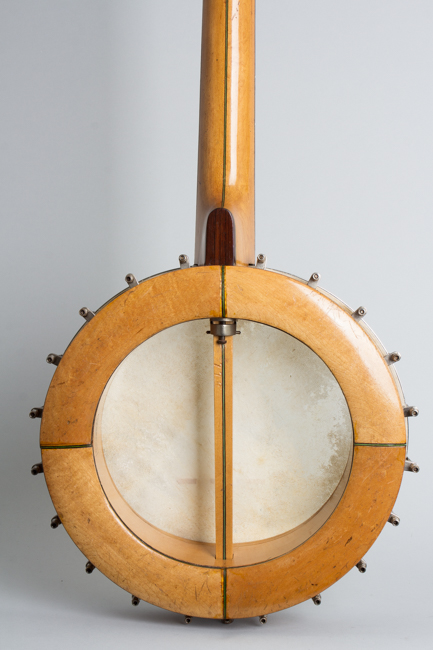 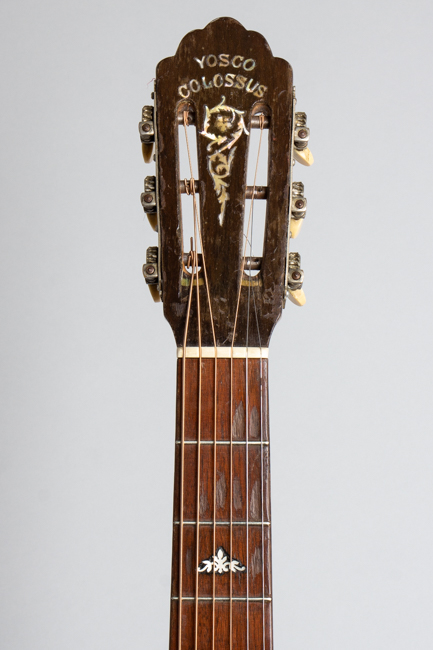 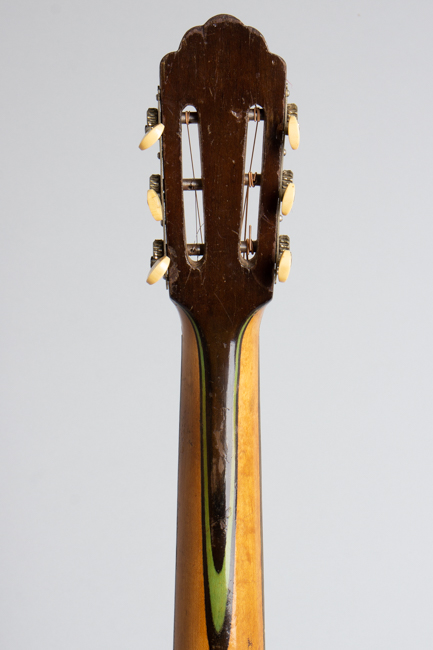 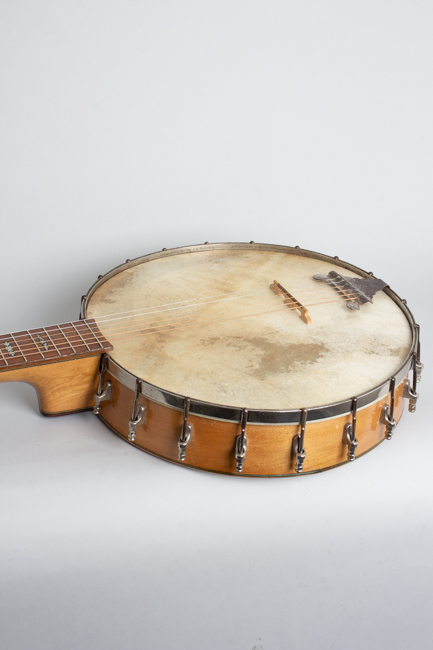 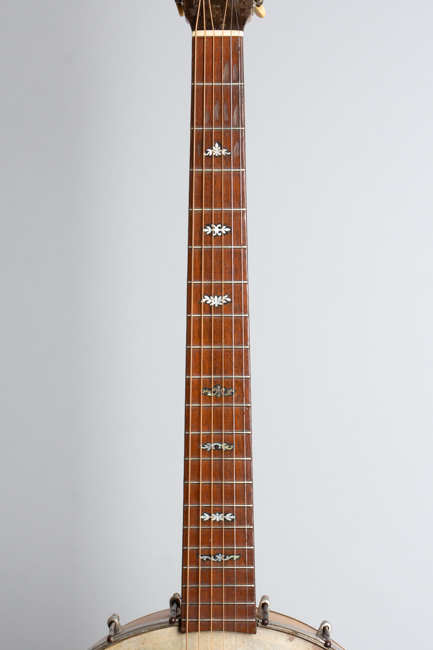 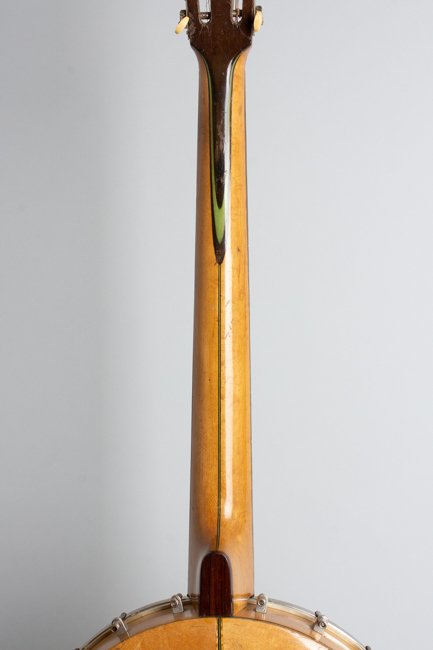 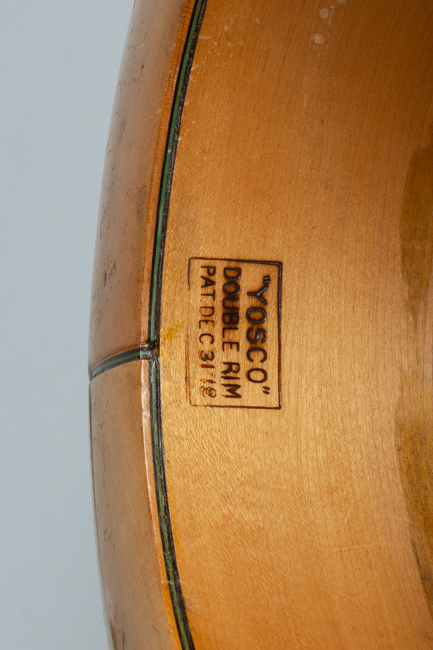 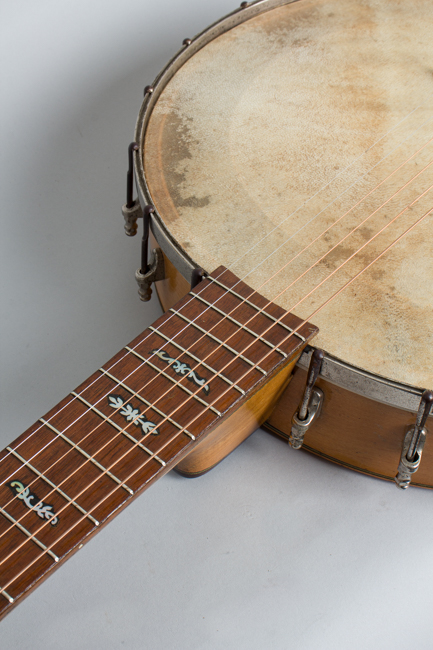 This imposing beast is one of the wildest banjo creations we have seen in a while! Made about 100 years ago right here in NYC, the Yosco Colossus is a very long-scale banjo guitar with a huge mostly hollow chambered rim. This rim design was the subject of Yosco's 1919 patent, and was used for a range of mostly tenor banjos in the late 1910s and early 1920s. This huge six string Colossus is both the largest and most interesting of his products we have encountered.

Rocco Lorenzo Iosco was born 1869 and was brought to the US as a child in 1877. As was often the custom at the time he Americanized his name to Lawrence Yosco and entered the musical instrument trade, as did many Italian immigrants. Sometime in the early 1900s he established the Yosco Manufacturing Company in New York to build mandolins and later banjos.

Lawrence Yosco's signature patent was granted December 31, 1918, just over a year after the application was filed. It covered what he called a "double internal resonator" (the instruments are stamped internally "Yosco Double Rim" with the patent date). This system entailed the outside rim being joined to a second internal rim spaced about 1 1/2" further in. The banjo head is stretched over both rims, making it an early archtop design similar to some other New York banjos (Lange and Majestic in particular) but in this case without a metal tone ring. Four curved pieces of wood join the bottom of the rims, forming an upward-facing hollow sound chamber.

This Colossus has both rim and neck made of laminated maple with dyed wood accents. The head is secured by 20 brackets and has a typical 1920s guitar tailpiece mounted directly to the back edge. The heavily lacquered fingerboard appears to be a light-colored variety of rosewood, unbound but with small shaped pearl inlays that are mounted with a generous amount of filler. The slotted headstock has some fancy pearl with the instrument's name spelled out and the same NY-made strip tuners as used by Gibson and many others from this period

By the standards of the day this is a medium-fancy banjo, with its large rim and very long neck certainly the most unique of the Yosco instruments we have seen. The woodworking is likely the product of Rettberg & Lange's 24th street factory, with Yosco doing the assembly and setup; this was the case with several small NY-area makers in this period. The large sound chambers and wood-only rim give this 6-string an oddly archaic and highly "reverby" sound, unlike any other 6-string banjo we have had. All hail the mighty Colossus!

This instrument shows some use over the past 100 years but appears all original except a later skin head and bridge. Overall it shows some general wear and tear with a number of seam repairs to the rather eccentric rim. This is no longer completely round, but has compressed itself to a somewhat oval shape. Nevertheless this is structurally sound and a good playing and absolutely unique sounding 6-string banjo, one of possibly a handful -- if that -- ever made. Very Good + Condition.
×