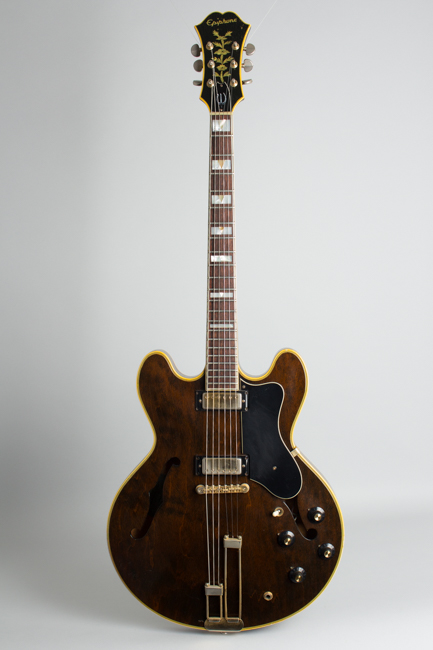 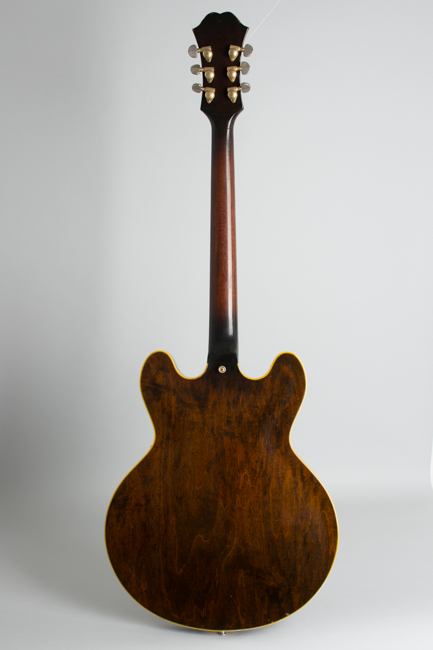 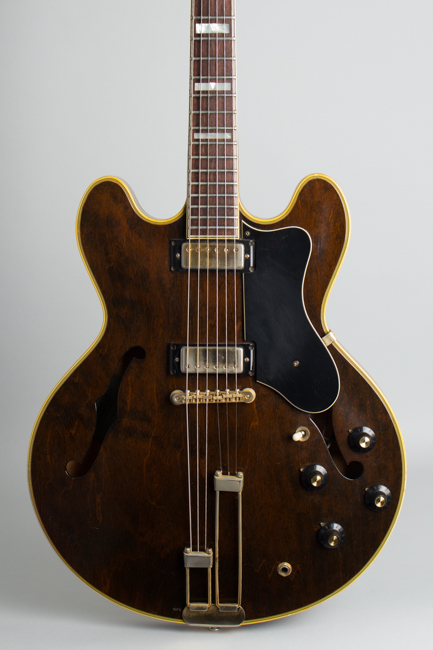 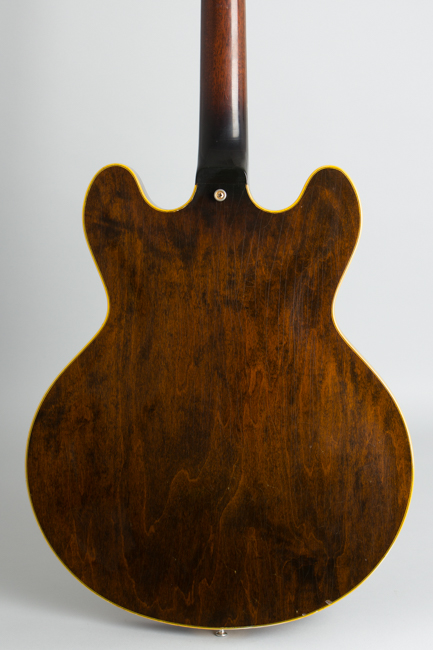 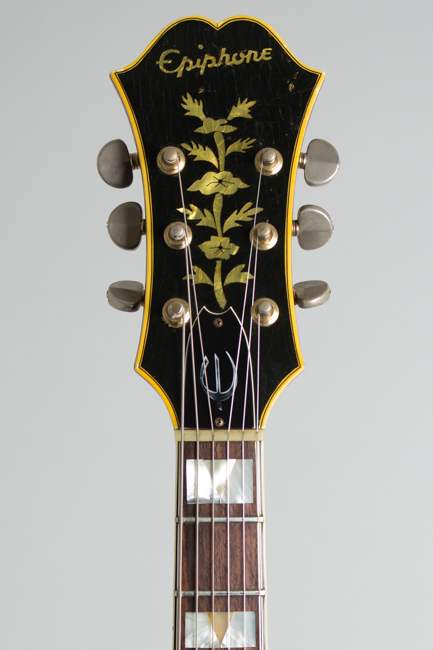 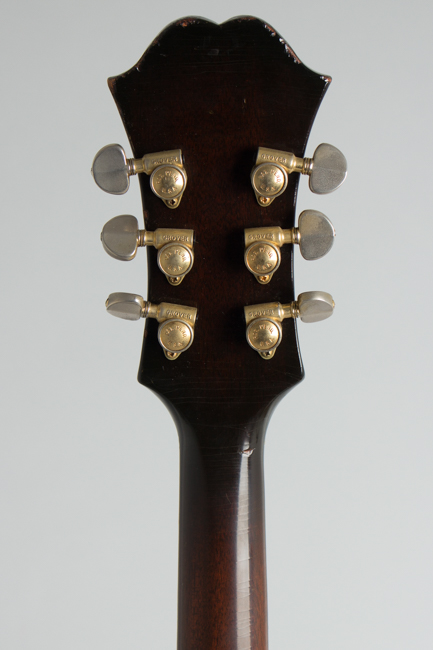 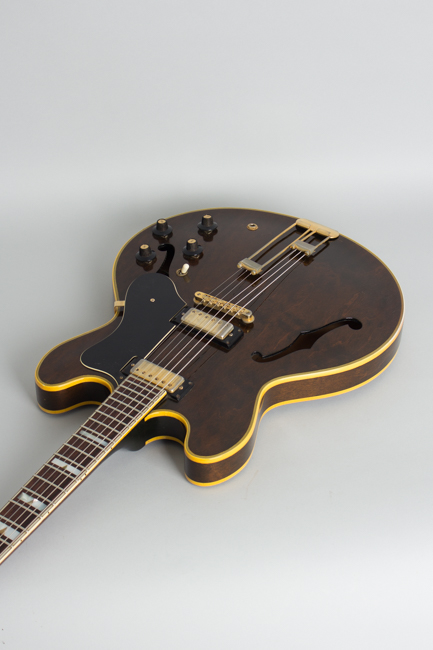 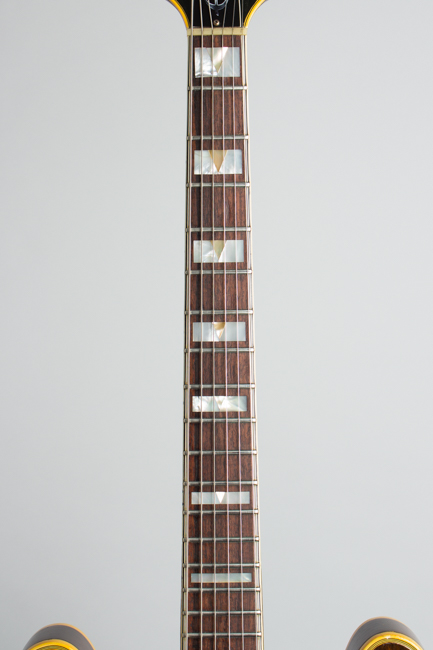 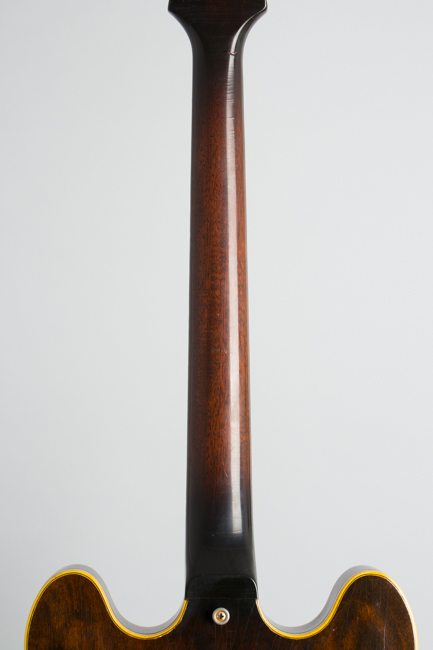 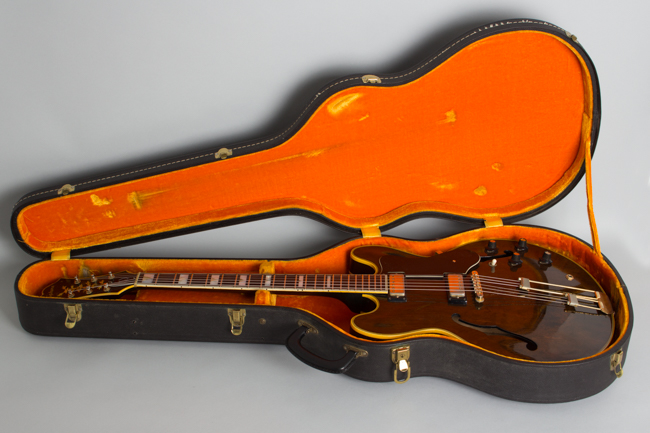 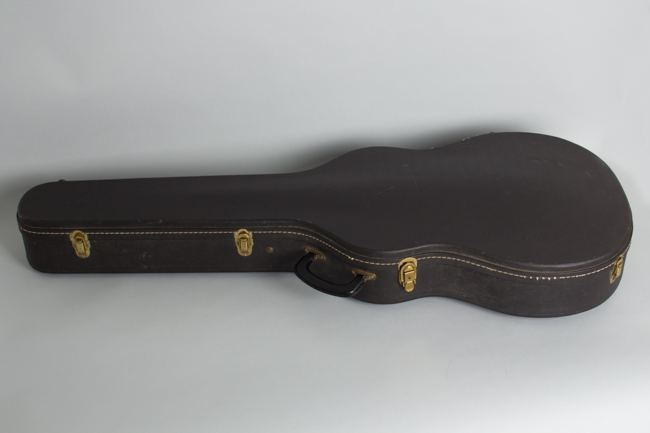 The relatively flashy Sheraton was Epiphone's top of the line thinline semi-hollow guitar in the 1960s; the model was equivalent to the Gibson ES 355TD but built in much smaller numbers. The main differences were use of the then-proprietary Epiphone mini-humbucking pickups and the somewhat more elaborate Epiphone inlay patterns, a tradition dating to the 1930s.

The rosewood fingerboard has five-ply binding and the inlay is the split pearl block with "V" abalone centerpiece, in the 1940s Emperor style. The thin elongated headstock is triple-bound with the signature "tree of life" pattern in pearl used on top-line Epiphones. The top is bound in 6-ply and the back is 3-ply. All hardware is gold-plated including the original Grover Rotomatic tuners. The knobs are the typical "witch hat" late '60s Gibson style.

The rather costly (over $500.00) Sheraton was made in fairly limited numbers through the '60s, and the optional (and seldom seen) late '60s dark walnut stain finish makes this a rare guitar. With a slim round-backed neck, this is a very comfortable player. This particular Sheraton would be one of the later ones made, one of 48 non-cherry examples shipped out in 1968. This is a played but well-cared for guitar complete with an original period HSC.

This guitar has some general wear but overall is quite well-preserved. The finish shows moderately heavy checking over much of the instrument but the only area with much wear is the lower side below the tailpiece. There is one small dink in the back of the neck behind the nut on the bass side.

The gold plating shows some typical wear, and the pickguard has some scuffing -- the guard itself is the correct pattern and appears fairly old but may not be original. The guitar was refretted some time ago and the frets are fairly low and flat but play well, and the fingerboard has some light divoting in the lower positions. Other than these small points, this is a very nicely preserved late-'60s example of Epiphone's top semi-hollow guitar, in a well-preserved original black Gibson HSC. Overall Excellent Condition.
×