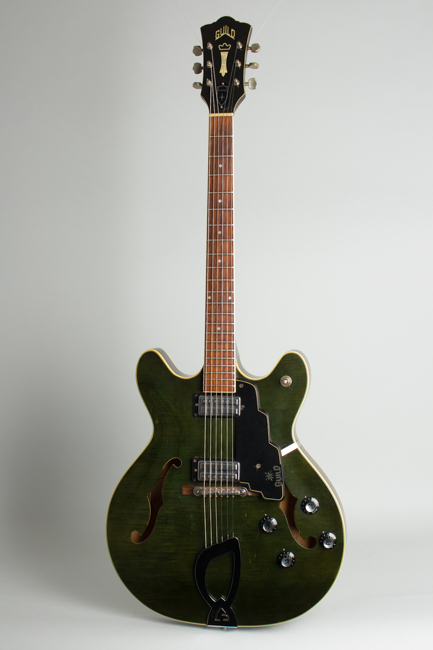 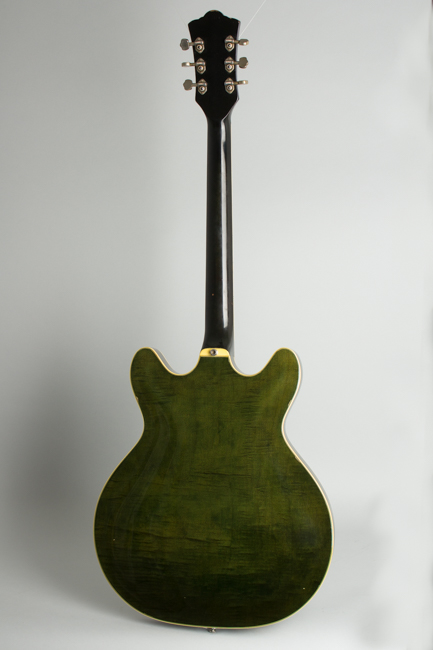 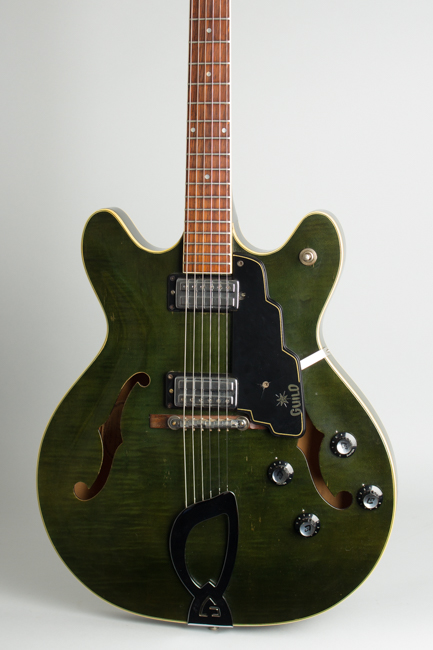 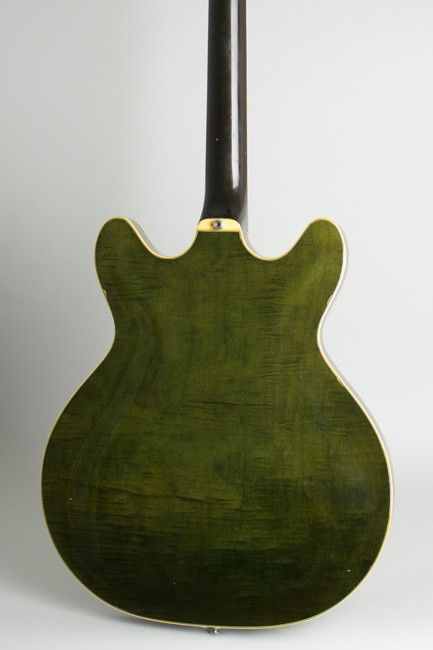 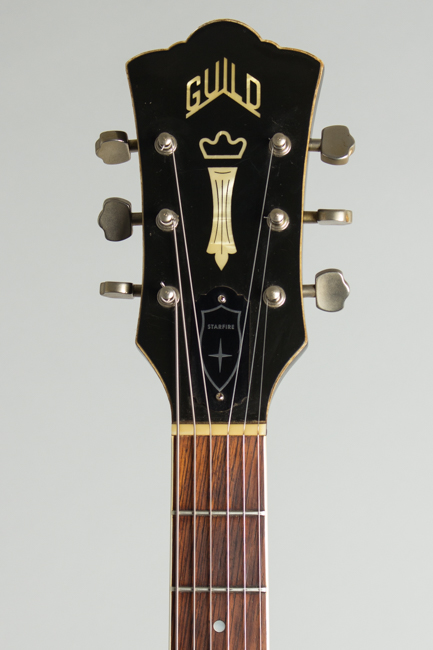 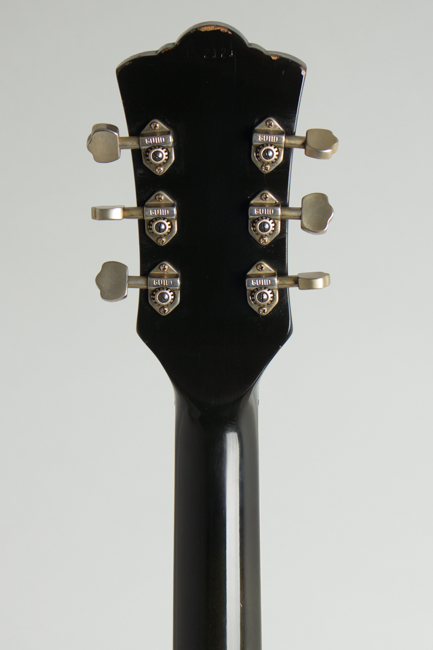 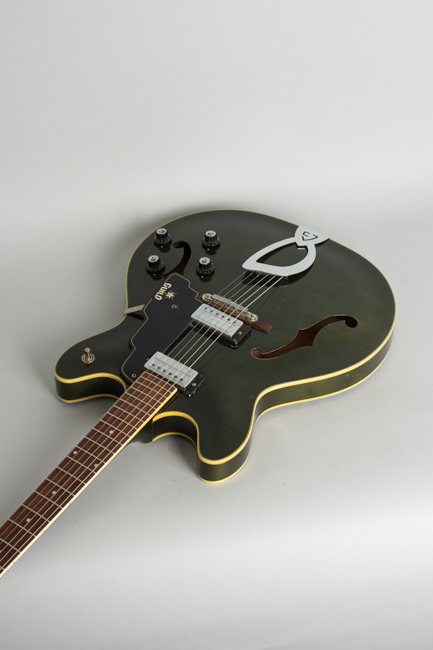 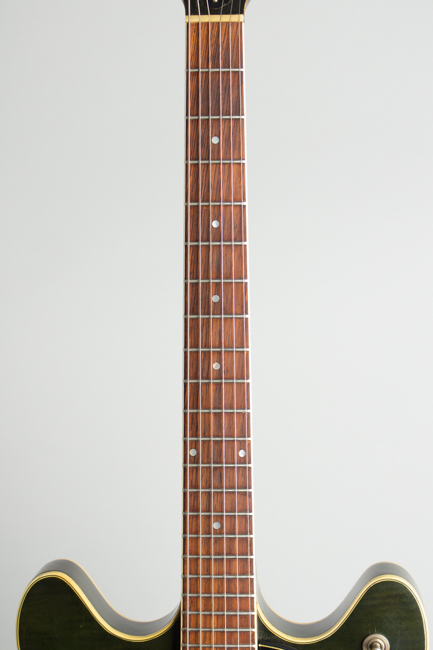 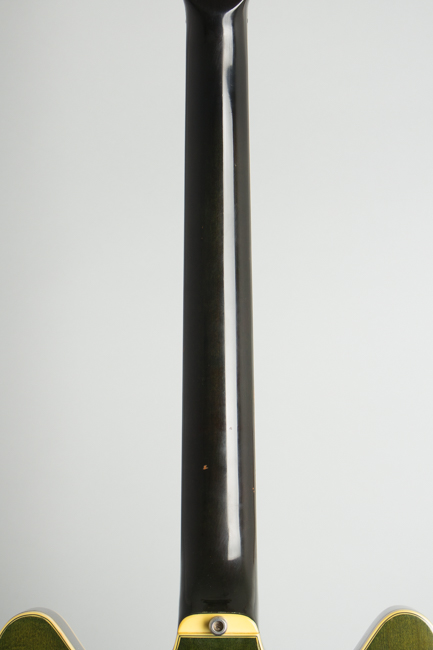 The Starfire series has been Guild's most consistently successful electric guitar line since its inception, and was by far the company's most popular electric instrument in the 1960s. This Starfire IV from 1968 is a double cutaway semi-hollow instrument with a laminated maple body in a beautiful deep green livery, semi-transparent, displaying some nice maple grain on the back. This was a custom ordered alternative to the more common cherry red or sunburst, and merited a $20 upcharge at the time.

The label reads "Starfire IV Green" with a serial number (also stamped on the headstock), dating this guitar to the second half of 1968. By the time this example was made, the neck joint on the double-cut Starfire models had been moved out to the 18th fret, resulting in better fret accessibility and a feel more akin to Gibson's ES-335 series.

The two pickups are the typical 1960s Guild humbuckers, similar to but a bit brighter and crisper than the Gibson equivalent with a nice wide tonal range. Like Gibson's similar ES-335, the Starfire IV has a solid block running through the center of the body, cutting down on feedback and giving the guitar a tighter tone.

This Starfire IV is a very versatile guitar and has been a perennial favorite among players of many styles -- they are particularly well-thought of as an electric blues instrument. This excellent example looks extremely sharp, is a fine player, and remains a notable bargain compared to similar period Gibson instruments.

This is a very nice, clean guitar overall, with just some minor wear for its 50+ years on the planet. The finish shows some small dings, scuffs, and dents but still has the original shine to it, with the only really notable scuffing around the bridge.

All hardware is complete and original except the strap buttons are later. The clear plastic back-painted pickguard is slightly cracked from the mounting bracket screw being over tightened, but is still solidly intact.

The plastic headstock overlay has shrunken slightly but is not curling up. The neck is finished somewhat darker than the body, but the overcoat matches exactly under blacklight examination with no evidence of repair or overspray, so it is an original eccentricity. This is a lovely guitar and a very fine example of one of Guild's best 1960s creations. Excellent Condition.
×