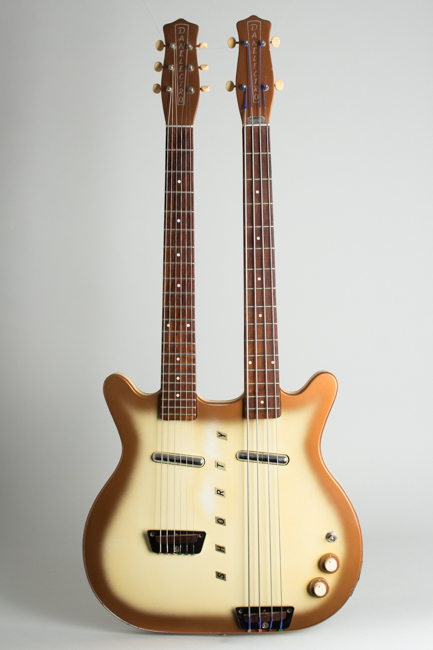 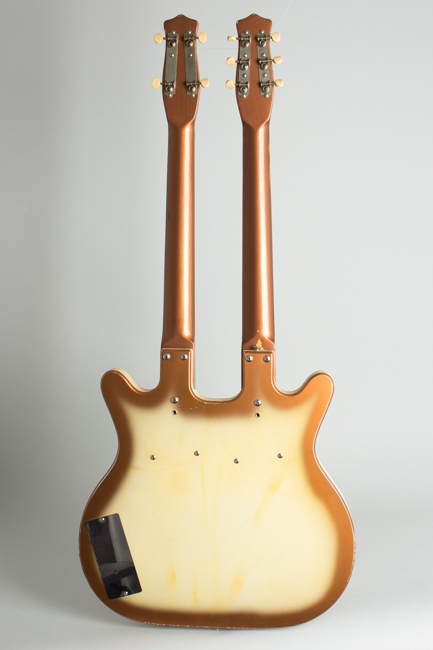 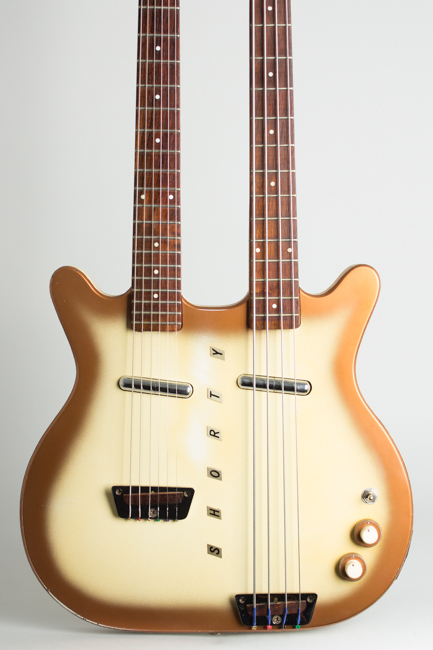 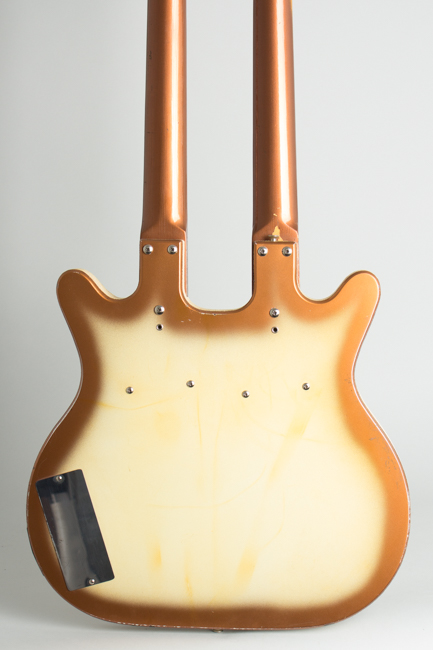 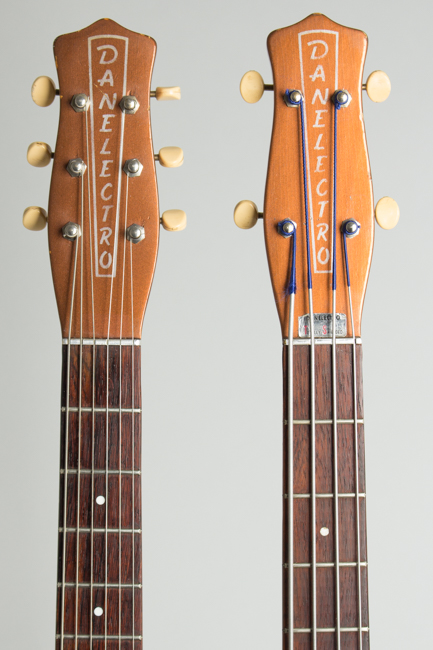 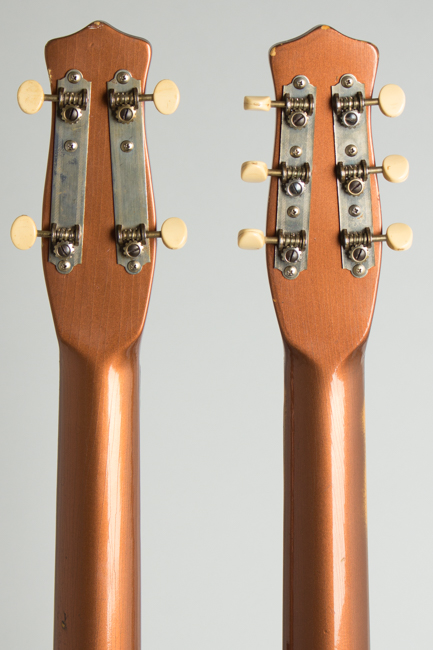 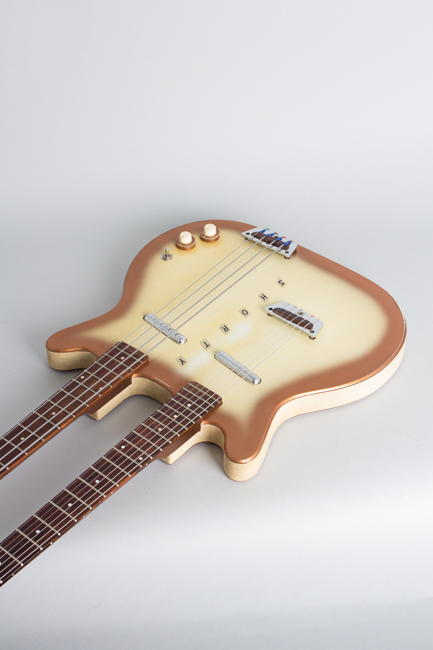 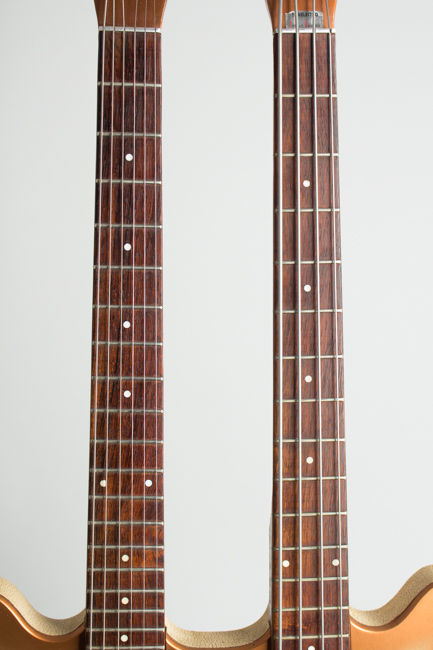 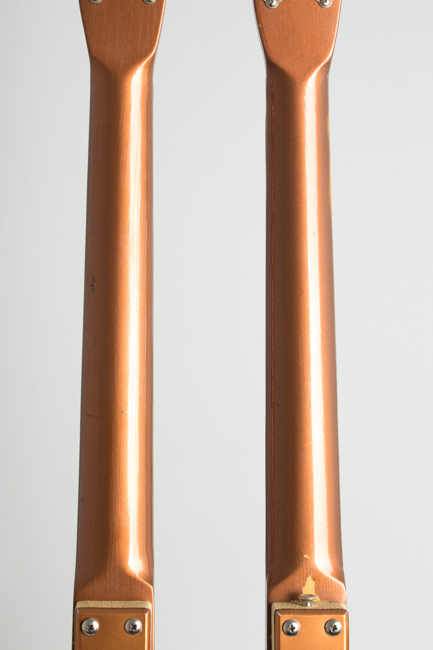 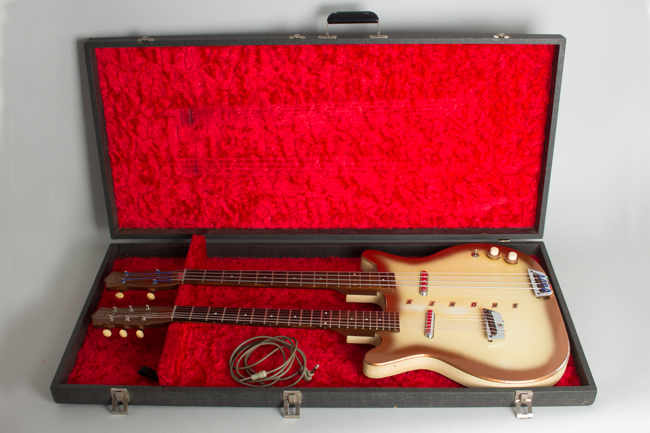 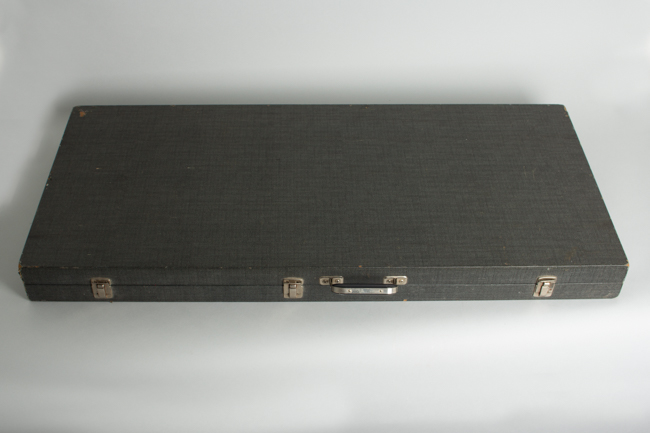 One of Nathan Daniel's more interesting ideas -- and that's saying something -- the Model 3923 Double-Neck (yes, that's how they spelt it) remains one of the Danelectro company's instantly iconic creations. Built with Daniel's favored Masonite-and-pine body materials and standard guitar and bass parts, the model 3923 combines a single-pickup shorthorn bass with a single-pickup guitar above. While not the most versatile of doublenecks, the thinline mostly hollow body makes it easily the lightest and handiest; it actually weighs less than many single-neck instruments. This one originally belonged to someone called "Shorty" and he neatly emblazoned the top with stick-on mailbox letters to advertise that name.

Each neck has its own concentric tone & volume knob set, and there is a 3-way switch allowing either guitar or bass -- or both -- to be active. The sound is surprisingly good and you can actually gig with this without incurring back issues the next day! This one never had the standard clear plastic pickguards mounted, an oddity we've seen before occasionally on Danelectros that usually have them...maybe Shorty ordered it that way. This one was built in mid-1964 at the high point of the Beatle-inspired guitar boom so it IS possible they simply forgot to mount them in the rush to get anything out the door!

Often referred to as the "Stan & Dan" model due to a famous album cover featuring that gospel act with TWO of them side-by-side, the Model 3923 is a Danelectro classic and one of the enduring oddball mid-century American guitar creations. "Jed Clampett" played one on an episode of THE BEVERLY HILLBILLIES and while this model has often been used for pure visual effect it is actually a good-sounding instrument. This is a very nice example, showing some use (by Shorty, we assume!) but still original, intact, and quite playable. The large and heavy red-lined original Masonite hard case is still present and functional as well, which is a rarer find than the actual instrument!

This double Danno shows some play wear but remains nicely original and was personalized for the original owner with gold-and black mail box letters across the face reading "SHORTY". All hardware is original and unaltered; the original copper shielding wrap on the electronics looks undisturbed. The finish shows some general wear with some worn spots on the edges and topcoat loss from strumming on the guitar half, but overall still has a nice shine. There is some odd staining on the back that probably resulted from a vinyl strap or cord laying under the instrument some time in the distant past; this is fairly subtle without the "strap burn" melt effect we sometimes see. The vinyl siding is intact if a bit dirty.

The original 3-way selector switch is working but not 100% reliable in operation; this is typical of this particular piece of Danelectro hardware which is a closed-back switch and difficult to effectively clean. This could be replaced if desired but we prefer to leave it original as the wiring rig is untouched. It is not strictly essential anyway as the pickups can also be easily turned on or off using the two volume controls. Both necks play well and this is one of the nicer Model 3923s we have seen, and we love its history even though we have no idea who "Shorty" was. The original case is intact and functional; the hinges have been relocated several times, but it still does the job. Excellent - Condition.
×