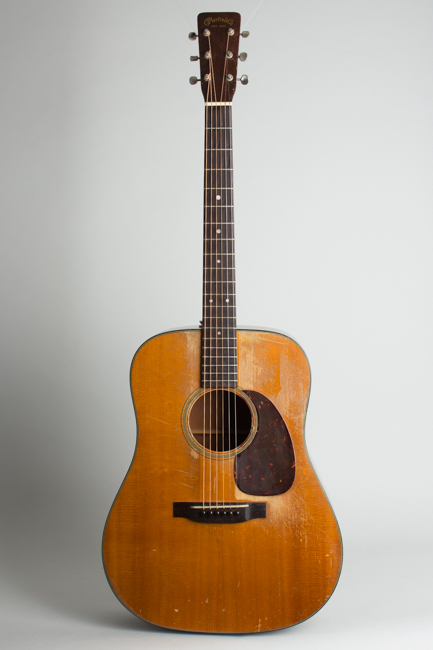 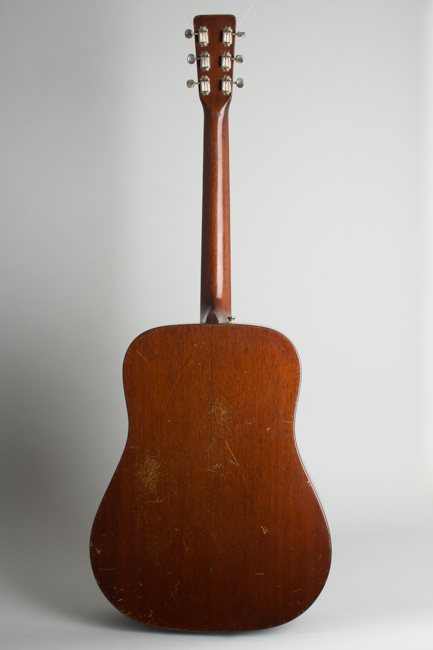 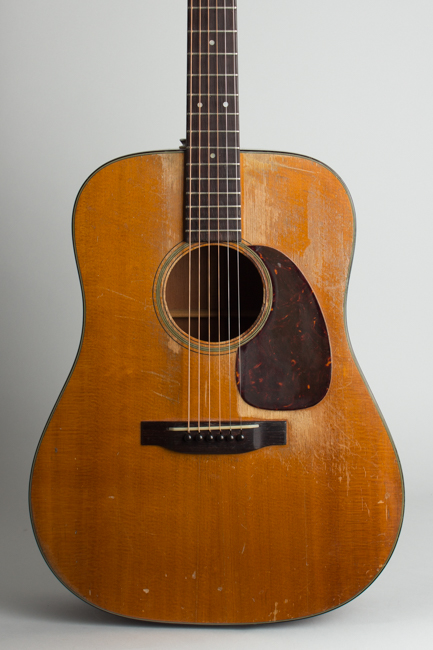 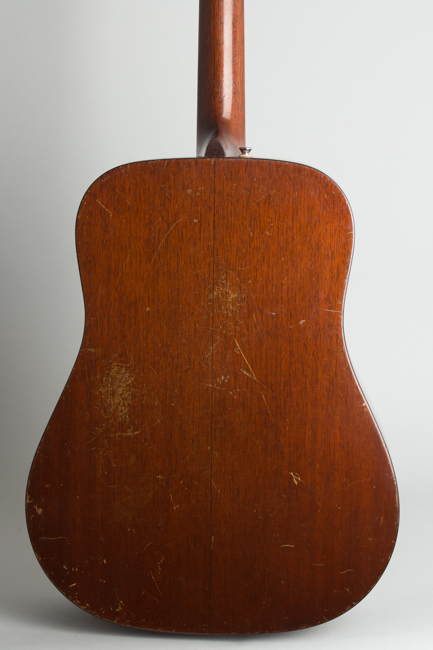 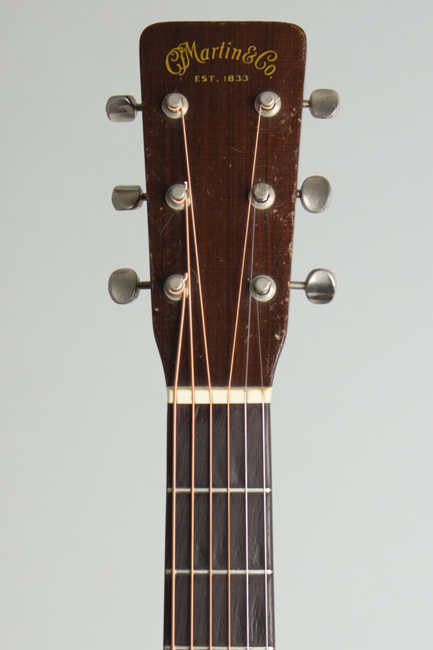 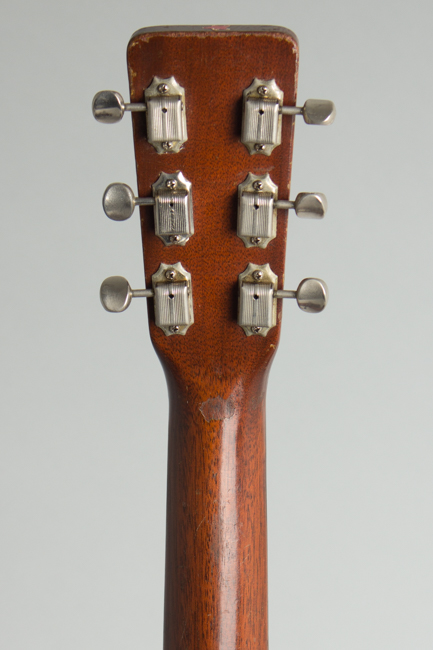 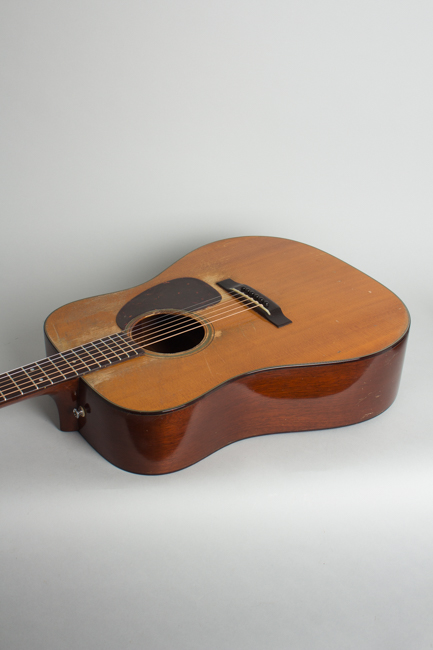 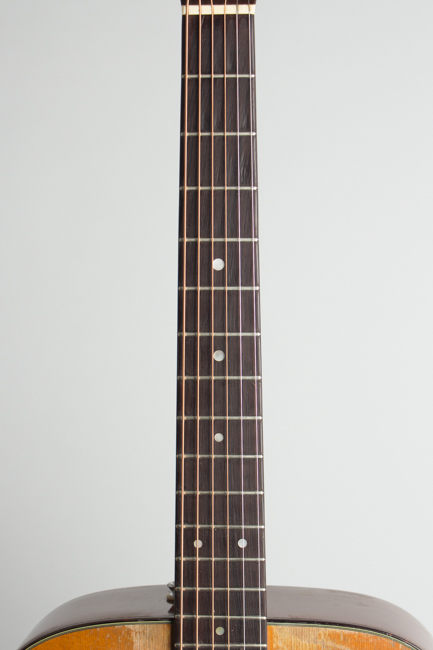 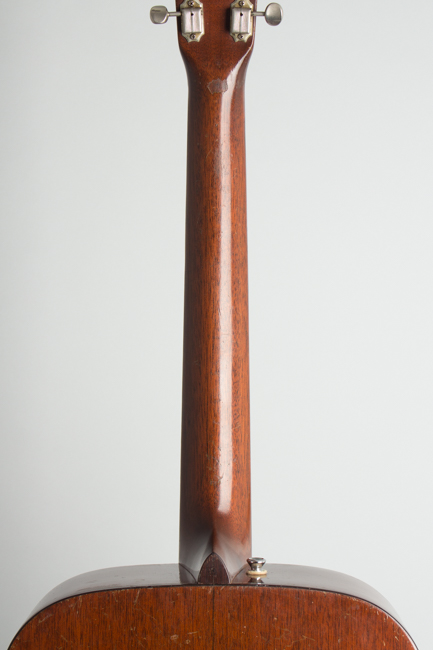 This is a great-sounding and playing 1950's D-18 that has seen a lifetime of professional play giving it a ton of character. This guitar has a fabulous big voice and while it shows some signs of long use has no major damage or repair. It features typical appointments for the 1950's; Kluson Deluxe tuners, larger varied-dot inlay on the Brazilian rosewood fingerboard, a rosewood long-saddle bridge and all tortoise celluloid trim. The top is a lovely piece of tight-grained Sitka spruce, the back and sides the traditional even-grained mahogany.

This D-18 was for many years a primary gigging instrument of Jon Sholle, a truly wonderful musician, fixture on the New York traditional music scene and friend to many players over several generations. Over a 40+ year career, Jon worked with many fantastic musicians including Vassar Clements, David Grisman, Peter Rowan, Tony Rice, Larry Campbell, Keith Carradine, Bela Fleck, Melissa Manchester, Maria Muldaur, Kate & Anna McGarrigle, Ester Phillips, Pee Wee Ellis, Sonny Stitt, and Bette Midler. Way back in 1964 at age fifteen, he recorded for Folkways Records with Roger Sprung's "Progressive Bluegrassers". He went on to win "World Champion Guitar" at both the 1967 and 1968 Union Grove Fiddler's conventions in North Carolina. In 1969, Sholle played on beat poet Allen Ginsberg's 1970 LP Songs of Innocence and Experience, a musical adaptation of William Blake's poetry collection of the same name.

From 1984 to 1986 he was a member of the David Grisman Quintet, featured on their album "Acousticity" which made No. 6 on the Billboard Jazz chart. Sholle also recorded two critically acclaimed solo albums for Rounder Records, "Catfish for Supper" and "Out of the Frying Pan" and compiled and annotated the LP "Rounder Bluegrass Guitar". He was featured on Andy Statman's 2011 Shefa label release "Old Brooklyn". Sholle appeared in the 1979 film "The Rose" as a member of Bette Midler's band, and both on-screen and playing on the soundtrack for the Peter Bogdanovitch-directed Audrey Hepburn movie "They All Laughed". He also appeared in several Broadway shows, including "The Best Little Whorehouse in Texas" and "Big River".

This well-worn and obviously heavily played D-18 was along for much of that ride. We can't promise it will get you into the movies, or even a gig with Bette Midler, but we can guarantee this fantastic old Martin has a lot of music left in it and many stories still to tell.

This truly great sounding but very well-worn old D-18 is the epitome of "Ragged but Right". It has been played extensively but well cared for, and despite the legacy of heavy use remains in excellent gigging condition. It is also nicely original with the only notable alteration being a strap button added on the side just above the neck heel. The top has a sealed spruce grain split in the usual spot by the top edge of the pickguard, and another pair of neatly sealed grain cracks behind the bridge off the back edge. All are neatly cleated up inside. The bridge and bridgeplate remain original, as are the Kluson tuners.

There is a lot of wear to the top around the fingerboard, pickguard and soundhole rim. The finish overall has checking, dings, dents and scrapes with buckle wear to the back and a spot of finish missing on the rear of the neck behind the nut. The instrument has recently had a very clean neck reset, with the frets (which we assume to be an older refret) leveled and crowned so playability is excellent. This guitar is not for the "clean freak' but is a serious musician's tool, a genuine relic of a wonderful career spent in music. We salute Jon's memory and legacy and hope his well-loved D-18 continues to play on in new hands. Very Good + Condition.
×