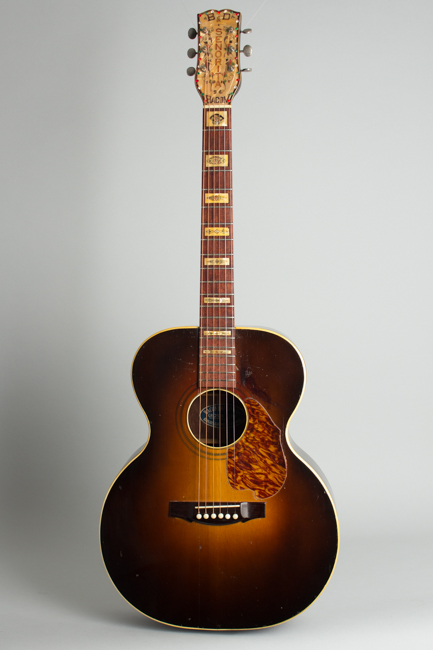 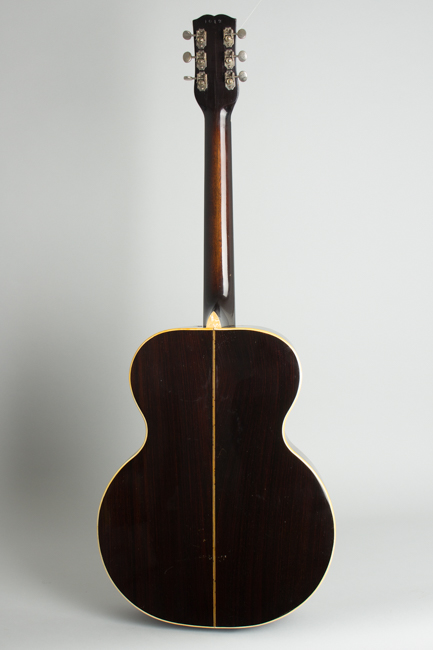 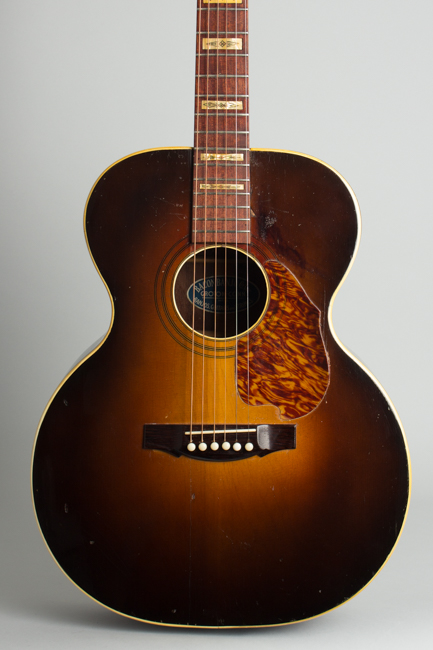 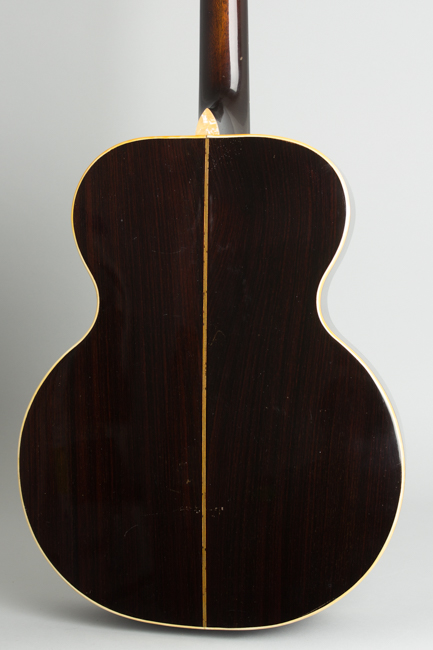 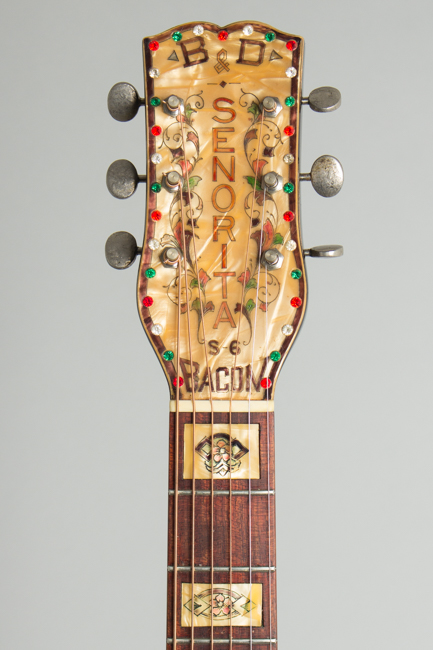 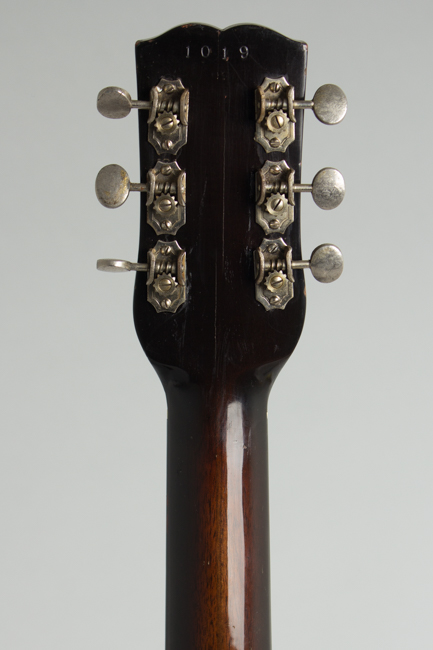 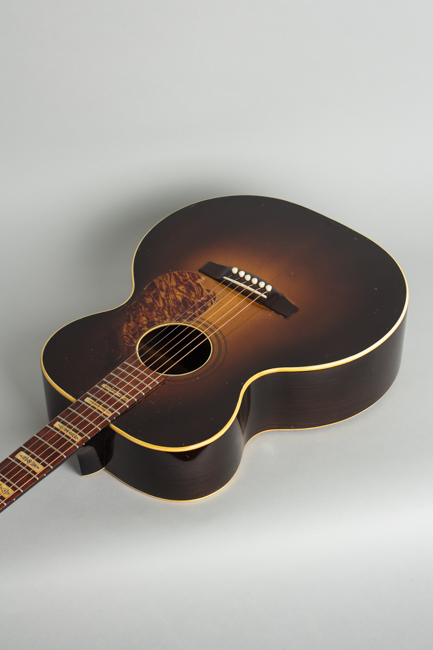 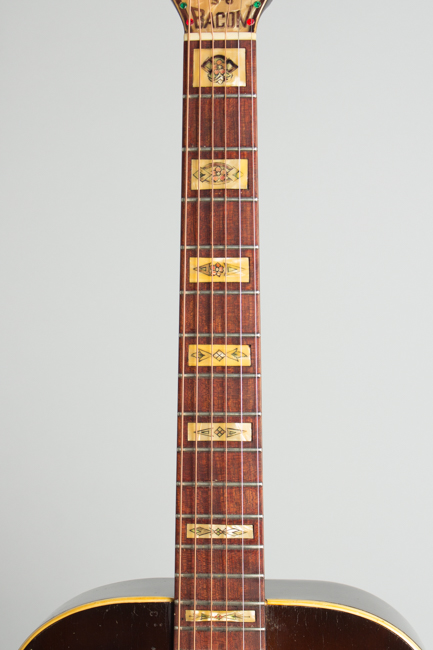 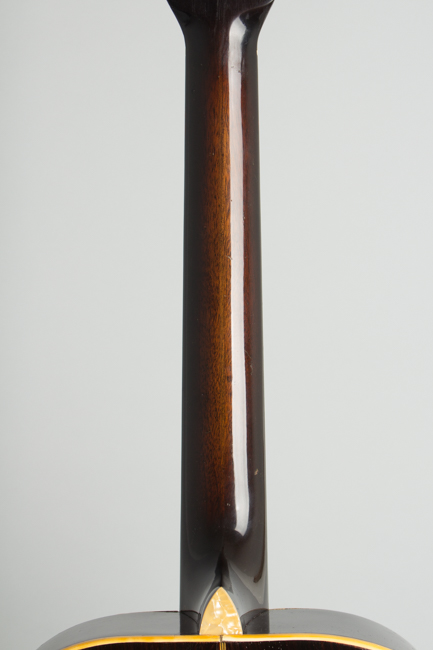 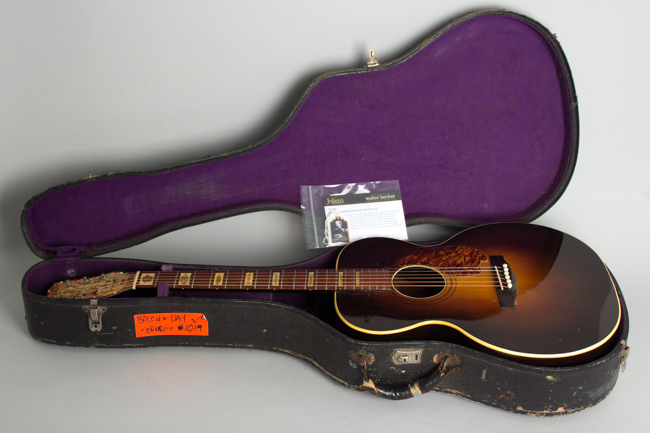 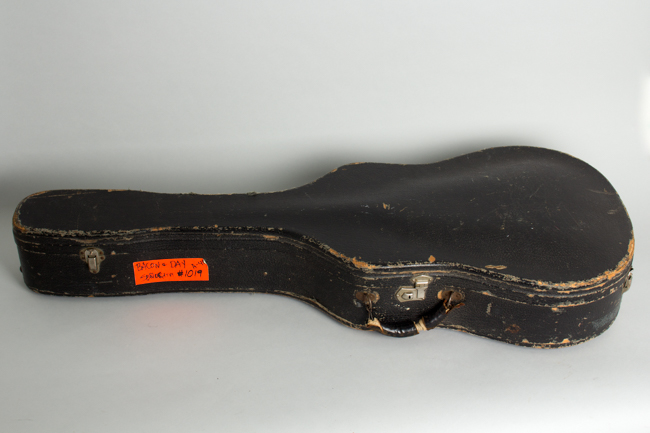 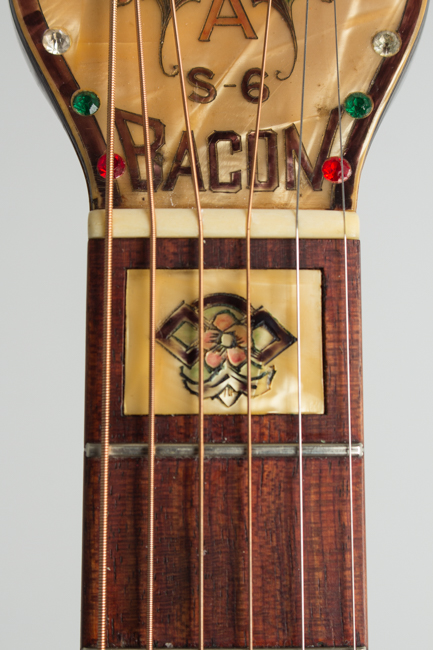 This is a lovely example of an extremely rare flat-top guitar, one that many have inquired about over the years. It is a Bacon & Day Senorita Model S-6, an instrument even many experienced vintage flat-top enthusiasts have never seen. This particular model is considered a very collectible instrument, both for its inherent qualities and due to an association with John Fahey, who played a similar Ne Plus Ultra flattop in the 1960s which appeared on several LP covers at the time.

This Bacon & Day Senorita was built in the mid-1930s when the Bacon Banjo Company was on its last legs, a victim of both the lingering Depression and the declining market for banjos. While the guitar itself was made by Regal in Chicago, the decorative touches of pearloid and rhinestone are pure Bacon. Bacon & Day instruments were always top quality, and this ranks with the finest Chicago-made guitars of the era.

Although the Bacon company built many of the flashiest (and most expensive) banjos of the 1920s, they had no experience, or apparent interest, in building guitars. They had dabbled with ukuleles and mandolins in the early 1920s, and had even sold a few Martin guitars with a Bacon stamp, but in the main had been able to prosper with a banjo-only line.

When the high-end banjo market collapsed in the early 1930s, Fred Bacon and David Day, both older men with decades of experience in the music business, took the expedient route and contracted with outside makers to supply them with guitars that could be finished off as "B&Ds". While similar to other Regal-built instruments, including the Tonk Bros. Washburn line, these "B&D" guitars are always distinctively appointed, and also the best that could be had. Bacon marketed a number of Chicago-made guitar styles in the 1930s. All are quite rare, with the higher end flat-top ones particularly hard to find.

This B&D Senorita S-6 was by 1936 the top of the company's flat-top line, retailing at $60.00, around the same price as a Gibson Jumbo or a Martin D-18. Both of those guitars were built of mahogany, giving this rosewood Bacon something of a material quality advantage! Bacon's catalog stressed the tonal advantages of rosewood, but their main promotional efforts were given to archtop guitars. The nicely grained rosewood body features very rounded bouts with a narrow waist, more like a Gibson SJ-200 (which it predates) than any other large-bodied flat-top of the 1930s. The spruce top is X-braced and single-bound, with multiple binding on the sound hole edge. The pickguard is an eccentrically shaped piece of mottled tortoise celluloid.

The mahogany neck is a very shallow "C" profile with a generous 1 13/16" nut width, giving a lot of real estate to play on. The rosewood fingerboard is inlaid with pearloid blocks sporting floral and diamond patterns which are hand engraved and colored. The guitar's most distinctive feature is the headstock: in classic Bacon style, it is faced in pearloid which is engraved, colored, and inset with rhinestones in truly spectacular fashion. Bacon banjos were famous for their elaborate, even gaudy decoration, and this guitar continues that tradition in fine style.

This Senorita is a great-playing and sounding guitar with a deep and powerful tone, as nice a deluxe prewar Regal-made flat-top as we have ever seen or heard. The combination of the X-braced top, narrow-waisted rosewood body, and long scale produce a sound unique to this instrument with depth, power, and clarity in equal measure.

It is not an EXACT match for Fahey's B&D but we have never seen one that is, or any that come closer than this one does! Fahey played his Bacon on some of his more famous recordings, but it was even more influential for appearing on LP covers of several of his Vanguard albums in the 1960s. His wide and enduring influence on fingerstyle guitarists has led many players to search for a similar model.

This particular instrument was, until lately, in the collection of our friend and customer Walter Becker of Steely Dan. Since his passing we miss his visits to the shop, which usually lasted well into the after-hours of the evening. It was always fascinating to observe the care he took in selecting pieces, often spending hours experimenting to see how many different sounds he could draw from an instrument. This extremely rare B&D was one of the finest of his personal flat-tops, which included several other B&Ds, a line he must have had a special interest in. As we said then: "If Walter likes it, it must be a good one!"

This guitar remains in extremely fine-playing condition overall. Despite some wear and repair, this is the best of these very rare higher end B&Ds we have ever seen. The instrument seems to have seen several bouts of repair work over the decades, not unusual in flat-tops of this vintage.

The neck has been reset, possibly more than once. There is an old heel repair, quite well-sprayed over and inconspicuous, probably related to this work. There is some touchup to the top finish below the fingerboard in front of the pickguard, and several deeper dings and chips in this area. A small crack runs from each side of the fingerboard to the sound hole rim, all sealed up and reinforced from beneath.

Beyond this there are well-repaired grain cracks to the top off the bottom edge of the pickguard from celluloid shrinkage that did not go through the wood completely. There is one long top crack behind the bridge, neatly sealed and cleated. The top finish has a number of small dings and dents, some of which have been touched up. The back and sides are crack-free except for one small split on the side/back edge off the treble side of the heel.

The bridge is a handmade replica of the Guild-style piece that was fitted to John Fahey's B&D S-6. This is accompanied by a new small maple bridgeplate. This is the same piece that is on the very fine Ark New Era replicas of this instrument built by Tony Klassen. There is some finish missing in a small corner spot where the wing of the original bridge was previously.

The back of the neck is quite clean with a possible light overspray. The fingerboard has been neatly refretted with a new nut; the tuners remain original. Some of the color is worn away from the engraved inlays, but quite a bit of it is still intact. This guitar plays extremely well, and is a sonic experience unto itself for both fingerpicked and flatpicked styles. Overall this remains a lovely example of an extremely rare and sought after flat-top guitar with a great provenance. Excellent - Condition.
×