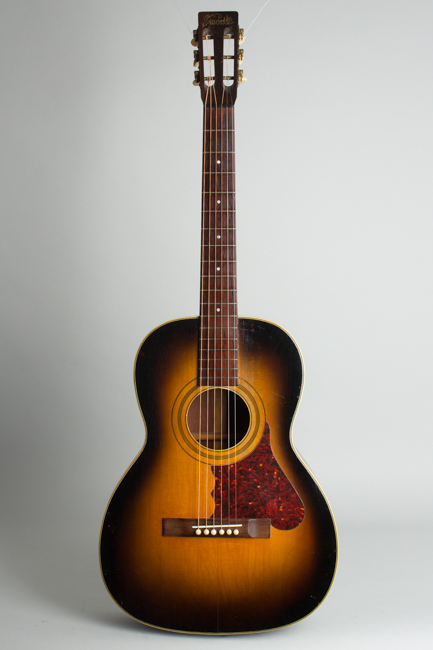 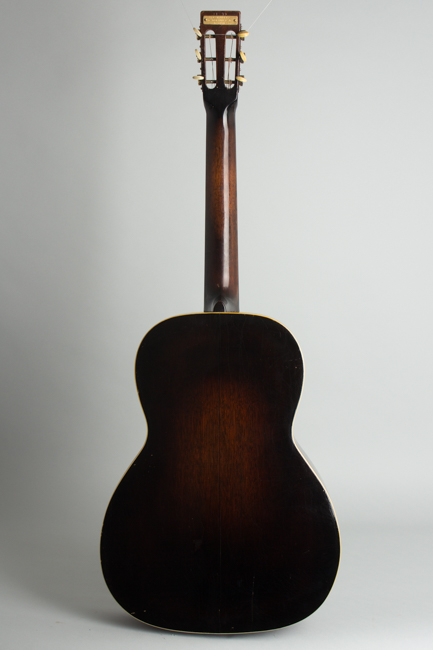 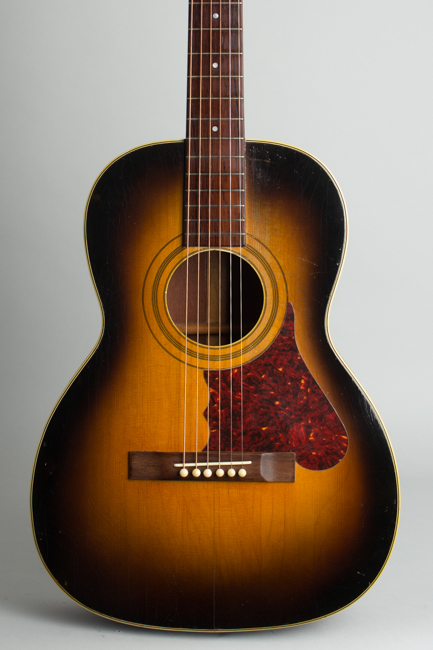 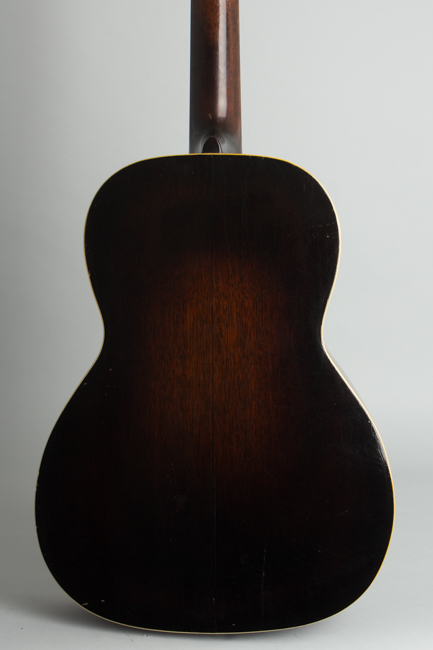 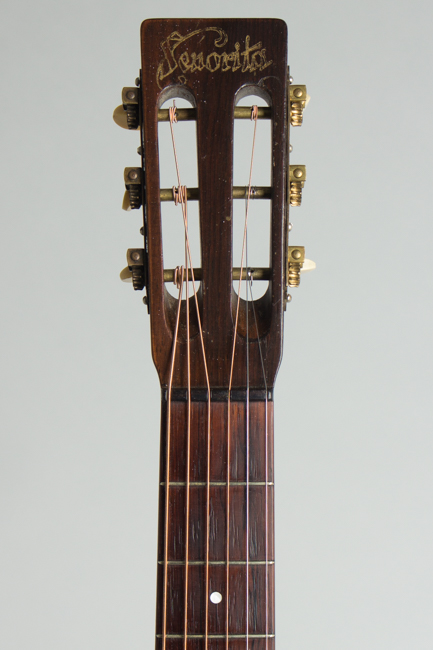 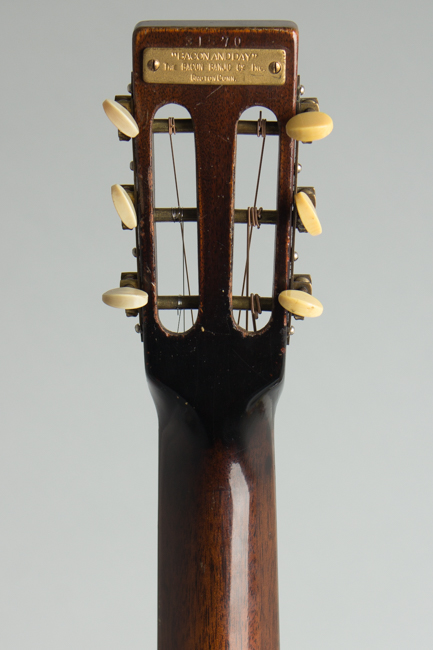 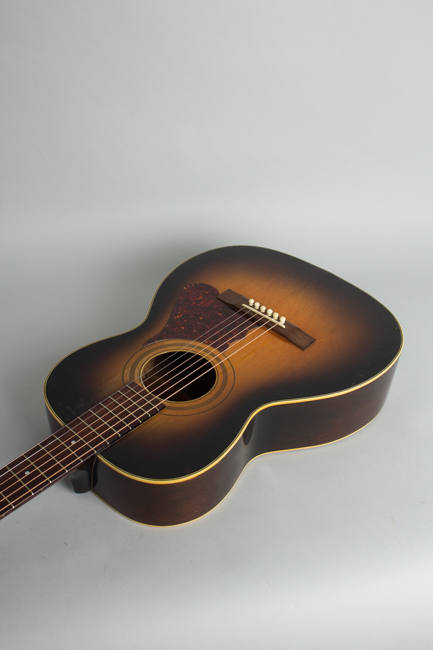 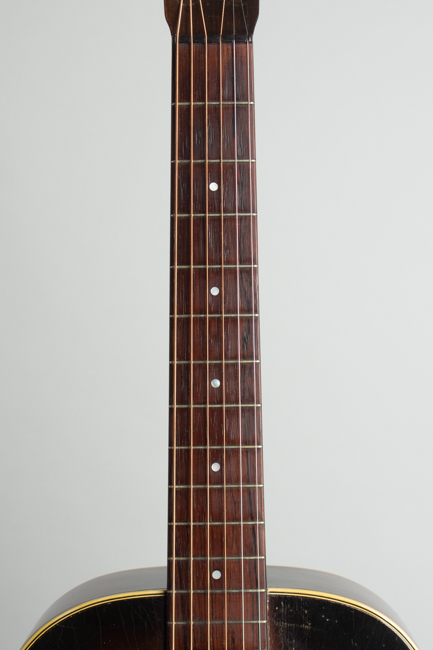 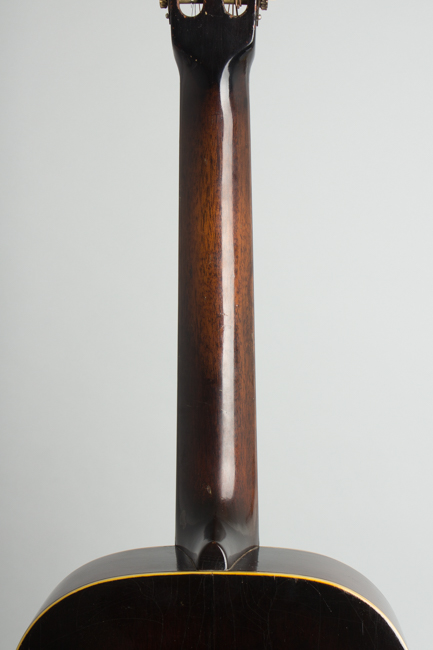 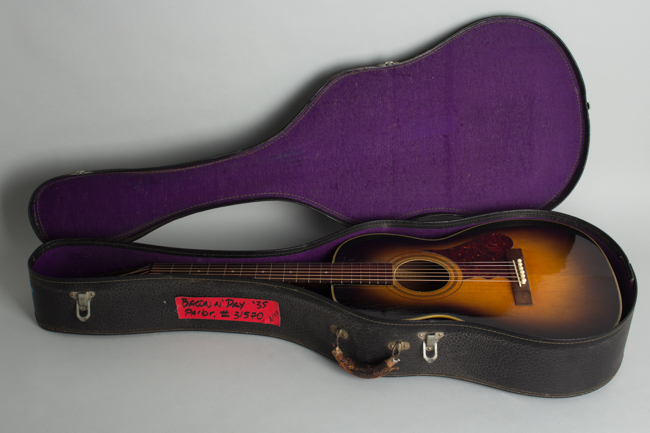 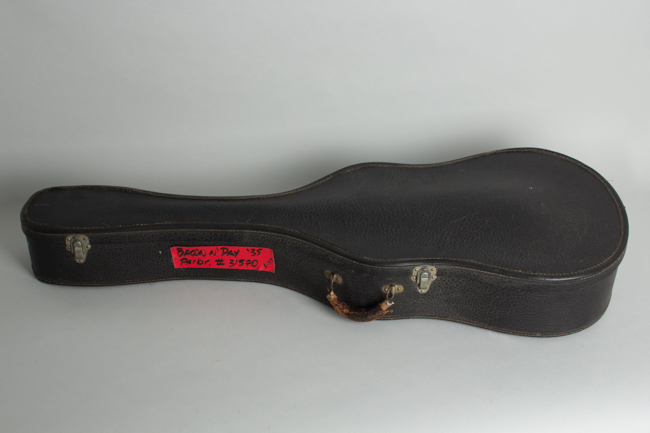 This is a very nice example of an extremely rare pre-WWII flat top guitar with a cool provenance. This very early 1930's Bacon & Day Senorita 12-fret flat top was an already slightly old-fashioned design for its era. This model is a rough equivalent to the early '30's Martin 00-18 or Gibson's 1930-32 L-1. While construction of the guitar was actually subcontracted instruments bearing the Bacon & Day brand were always top quality and distinctively appointed. This X-braced flat top is a fully professional grade instrument and ranks with the finest Chicago-made guitars of the era.

In the early 1930's the Bacon Banjo Company was struggling with the lingering depression and the declining market for banjos. They had built many of the finest and most expensive banjos of the 1920's they had no experience, or apparent interest, in building guitars. When the high-end banjo market collapsed in the late 1920's Fred Bacon and David Day, older men with decades of experience in the music business, took the expedient route and contracted outside makers to supply them with guitars that could be finished off as "B&D's". The bulk of them, including this early flat top appear to have been sourced from Regal.

This Senorita is the earliest version of the basic flat-top style offered by B & D, called the S-1 in later catalogs. It shows a number of design differences from mid/late '30's examples, most obviously the traditional 12-fret, slot head neck that was then being generally replaced by the modern 14-fret solid headstock design. The sunburst-finished spruce top is X-braced and quite light, 4-ply bound around the top edge with multiple soundhole rings and an eccentrically shaped tortoise celluloid pickguard. There is single binding on the back which has a subtle dark sunburst over the natural mahogany. The soundhole has multi-ply ring decoration while the bridge is a standard rectangle with an offset saddle, similar to 1930's Gibson style.

The neck is a soft "V" profile with a dot inlaid, unbound rosewood fingerboard featuring a 1 3/4" nut width. The 1920's style slotted headstock is fitted with unplated brass Waverly strip tuners with ivoroid buttons and arrow-shaped plate ends. A gold silkscreen "Senorita" logo adorns the headstock face, while the back has a metal B&D logo plate similar to those fitted to Silverbell banjos and a stamped serial number in the wood above. This number falls into the documented banjo series and dates the guitar to the beginning of 1932, making it likely one of the earliest known B&D branded guitars.

This Senorita is a great playing and sounding guitar and the only example of this early model we have ever seen. Aside from its considerable historical interest this particular instrument was until lately in the collection of our friend and customer Walter Becker of Steely Dan. Since his untimely passing we miss his visits to the shop, which usually lasted well into the after-hours of the evening. It was fascinating to observe the care he took in selecting pieces, often spending hours experimenting to see how many sounds he could draw from a single instrument. This was one of several B&Ds in his collection; it was a line he must have had a special interest in. As we said then: "If Walter likes it, it must be a good one!" Suffice to say, it is.

Overall length is 38 in. (96.5 cm.), 14 7/16 in. (36.7 cm.) wide at lower bout, and 4 in. (10.2 cm.) in depth at side, taken at the end block. Scale length is 24 1/2 in. (622 mm.). Width of nut is 1 3/4 in. (44 mm.). This rare B&D gem shows some wear and repair but remains an excellent playing and sounding instrument in nicely original condition. The top shows some pick wear on the line below the strings, and overall the finish shows some heavy checking and small chips, dings and scrapes. There is no major overspray to the original lacquer, just one small patched spot on the back and some tiny topical touch ups. There is a patch on the treble side of the heel covering what we would assume to be an old strap button screw hole.

There are no major repairs but some typical minor ones. One mahogany grain crack on the back has been sealed up on the lower back, solidly but not as neatly as we might prefer. There are no other cracks to the instrument, but the top center seam has been resealed. The original bridge looks to have been lowered slightly and the saddle repositioned a bit farther back to aid intonation. There is a thin rosewood patch over the original small bridgeplate, fairly crudely done but not thick enough to seriously impede the sound.

The neck was likely reset some time ago, a very neat job. The frets are original with only some minor wear, the ebony nut is original as well. The D string tuner shaft is bent, but still works fine. The guitar is an excellent player with a tight, punchy sound and plenty of volume that works well both fingerpicked and flatpicked. It is housed in the original heavy duty chipboard case with Steely Dan's studio storage marks on the outside. Excellent - Condition.
×