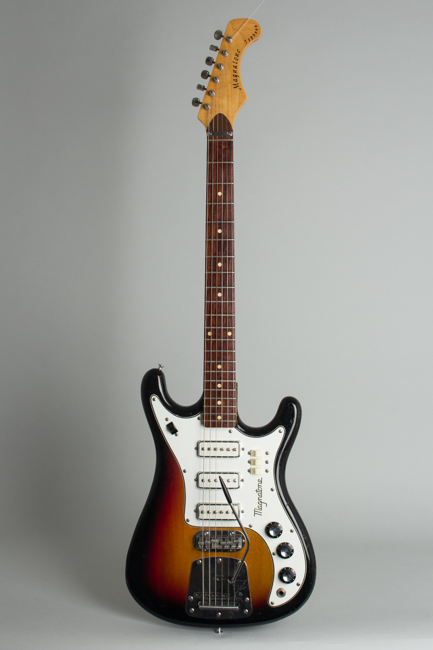 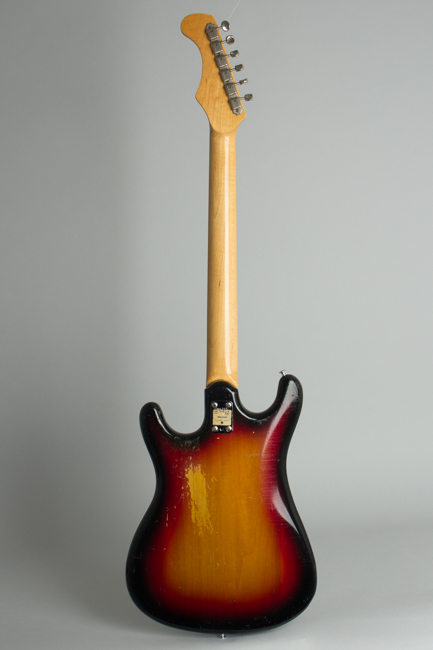 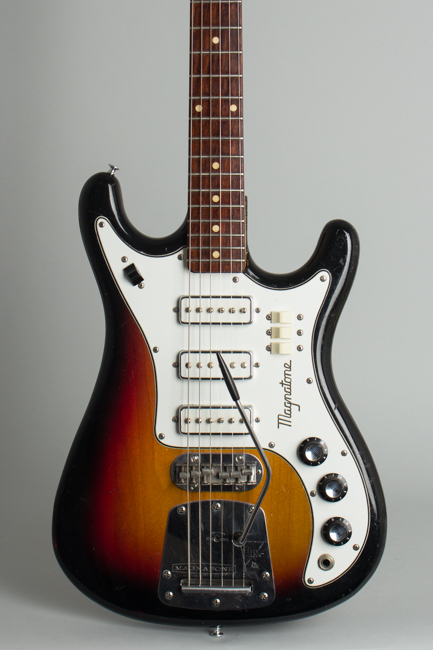 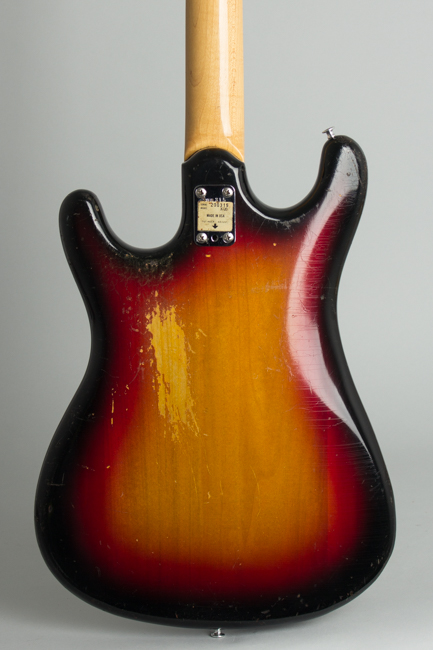 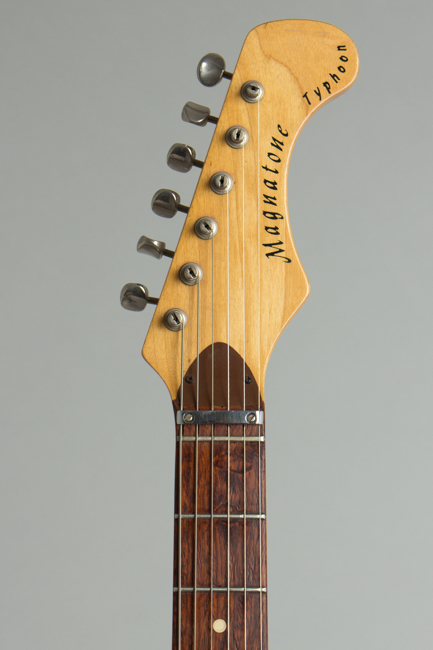 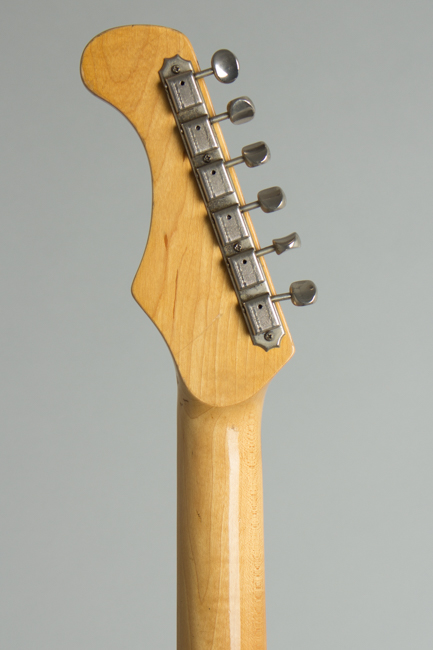 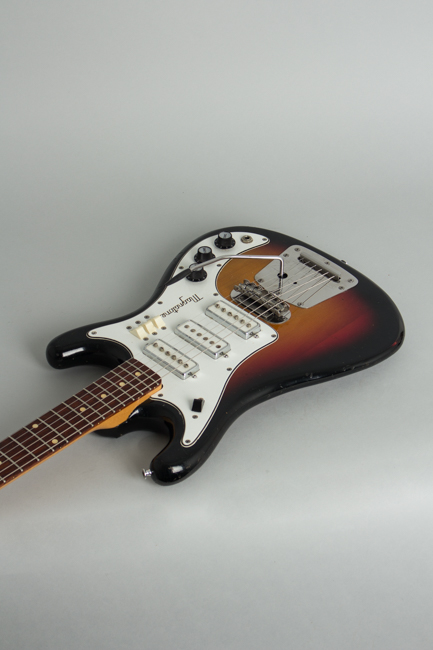 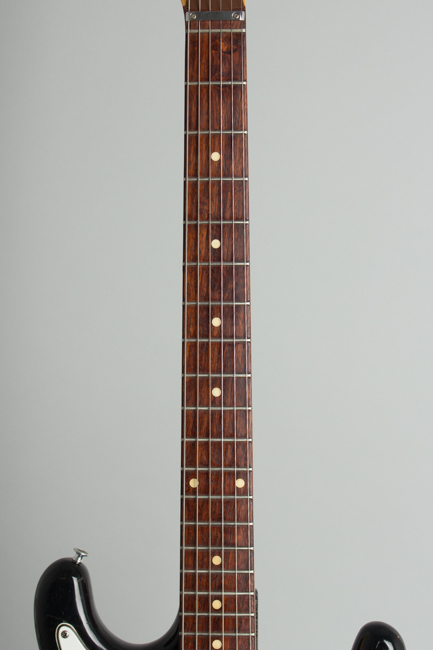 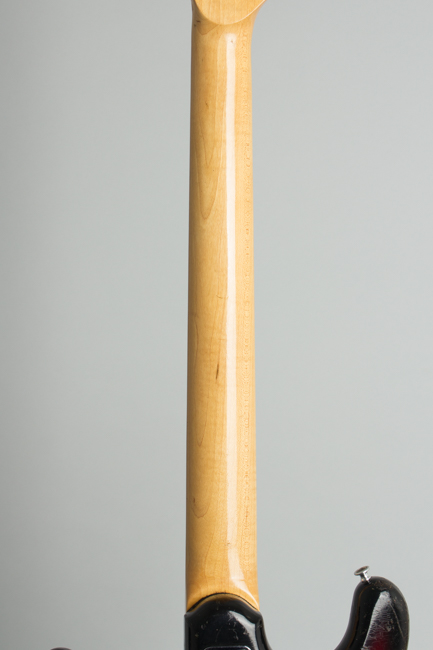 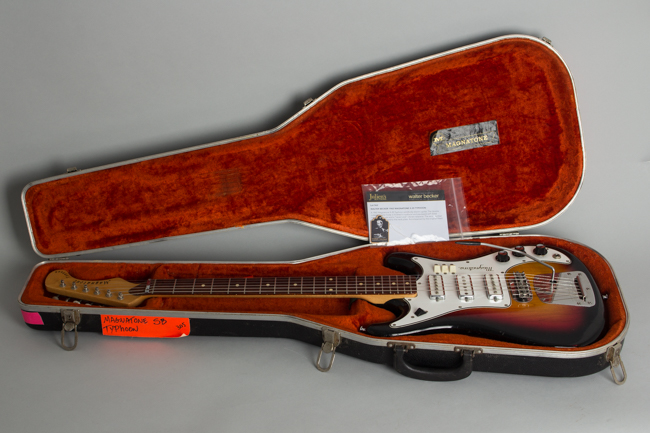 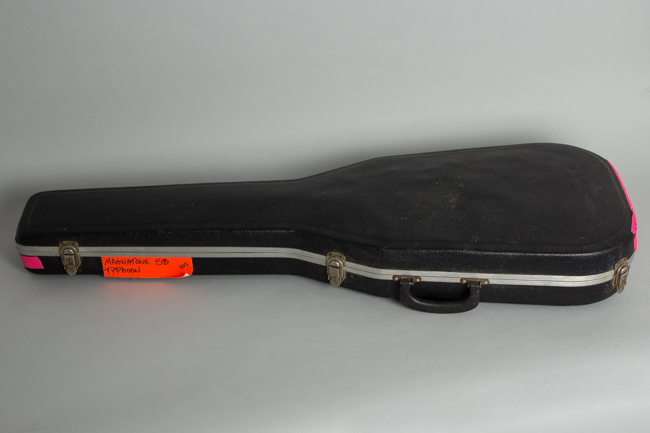 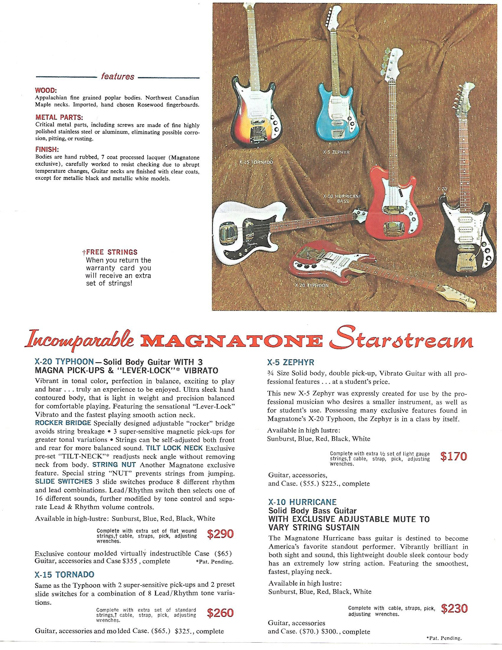 This Magnatone Typhoon is an interesting 1960s solid-body, among the last to carry that California brand. This line of sleek little Fender inspired twangers was launched in summer 1965 dubbed the "Incomparable Magnatone Starstream Slimline (of) personalized electric guitars". It's fairly certain that Paul Barth was involved in the Starstream design -- the instruments share a "family resemblance" to guitars he marketed under the "Bartell" name. Whatever their pedigree, these are well-made, light, handy, and good-sounding guitars.

This model, the X-20 Typhoon was the top of the line and combines original ideas with Fender-like elements. The contoured body is rather "Stratty" in shape while the bridge, vibrato, and electronics are more in the Jazzmaster/Jaguar mold. The body is smoothly contoured, with a deeper center blending into a tapered edge. The neck is maple with a rosewood fingerboard; the quality of work is to a higher standard than many 1965 guitars. "American made, by American craftsmen" was a selling point.

The single-sided headstock is fitted with strip Kluson Deluxe tuners with safe-T-slot posts. One nifty innovation is a screwed-down metal nutpiece fitted over the strings forcing them down over the zero fret, an interesting idea that works well. The guitar also features a very functional tilt neck adjustment, similar to what Fender used later. Magnatone helpfully put a sticker on the neckplate pointing this out!

The floating bridge has a blade on the bottom that rocks in a "V" shaped piece of metal sunk into the body and individual saddles adjustable for intonation. The trem design is indebted to Fender's Jazzmaster; Magnatone reversed the action of the spring and replaced the locking button with a flange. This "Lever Lock" facility was heavily touted, but functionally nothing Fender hadn't offered. The feel is similar to the Jaguar/Jazzmaster school and very sensitive.

The single coil pickups are similar in size to Rickenbacker units, with a metal outer casing and white plastic center. These quite good-sounding pickups were unique to the Magnatone Starstream, very similar to the Bartell units produced by Paul Barth in California. The electronics rig is wired to a top-mounted laminated white plastic pickguard with the "Magnatone" logo cut through to the contrasting lower level, a nice cosmetic touch.

Although the control layout appears straightforward, it is oddly complicated. The volume knobs are not for individual pickups, but each controls a separate circuit selected by the upper bout switch. The lower switches are not simple on/off selectors, but include tone-modifying resistors and combine the pickups in sometimes unexpected ways! The 3-pickup Typhoon uses a center coil with a different magnet structure without adjustable poles which creates different in-or-out of phase combinations with the other two. Magnatone described it thusly: "The Typhoon's unique pickup switching system provides the guitarist with eight pre-set rhythm and eight pre-set lead tones which provide 16 combinations of sound and encompass a broad spectrum from twangy 'rock & roll' to deep, muted jazz." The range of sounds IS impressive, from some very funky out-of-phase combinations to a remarkably deep resonant purr for such a "surfy" instrument. These final Magnatone designs are some of our 1960s favorites and a great value in a vintage American-made solid-body.

This Magnatone X-20 was until recently in the collection of the late Walter Becker of Steely Dan. Since his passing we miss his visits to the shop, which were usually full of free ranging discussions and try-outs lasting well into the after-hours of the evening. It was fascinating to observe the care he took in selecting pieces, often spending hours experimenting to see how many different sounds he could draw from an instrument. Over the years he purchased several of these Magnatones, and we remember him spending quite a while experimenting with the wide range of tones they produce and the sometimes surprising changes the interacting switches can produce.

This guitar shows some wear overall but plays and sounds great and remains nicely original. The lacquer finish has dings, dents, and scrapes overall with one large spot of buckle wear to the back. There are no repairs or alterations, just honest wear, and everything works as intended except for one internal modification. The blade flange under the bridge has been slightly altered so it is stable and not free-rocking, which makes the guitar far more prone to staying in tune than the original design. This is an inconspicuous but very useful modification. The original frets have some light wear but not enough to impact playability. The nifty original molded hard plastic case is included, with the Walter Becker auction tags and Steely Dan's storage markings on the case. Excellent - Condition.
×