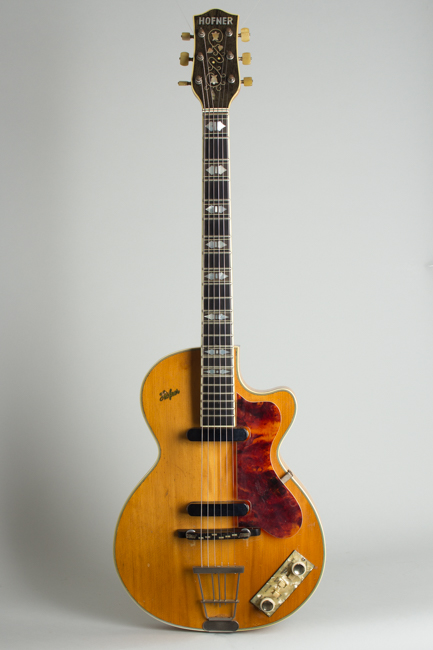 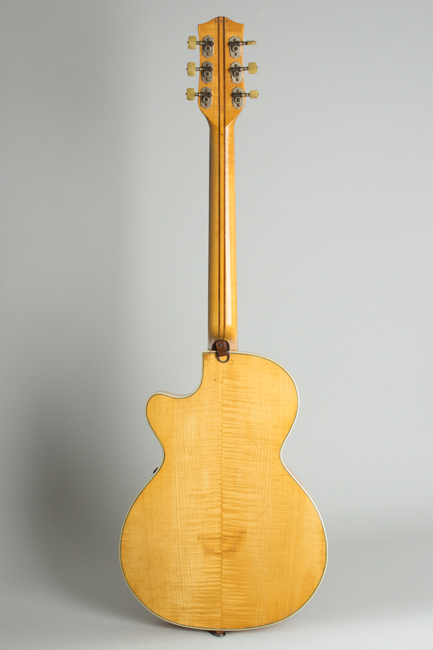 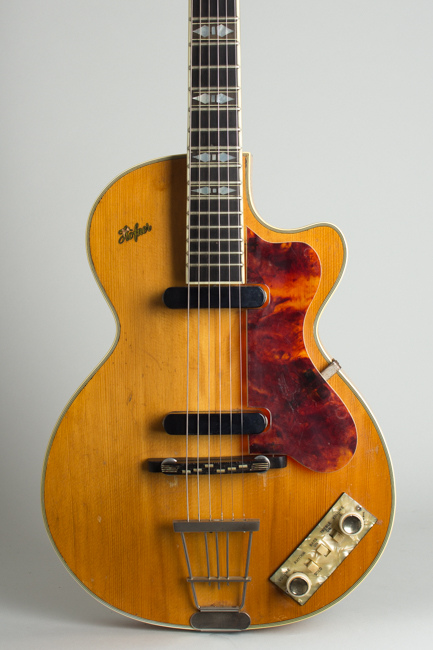 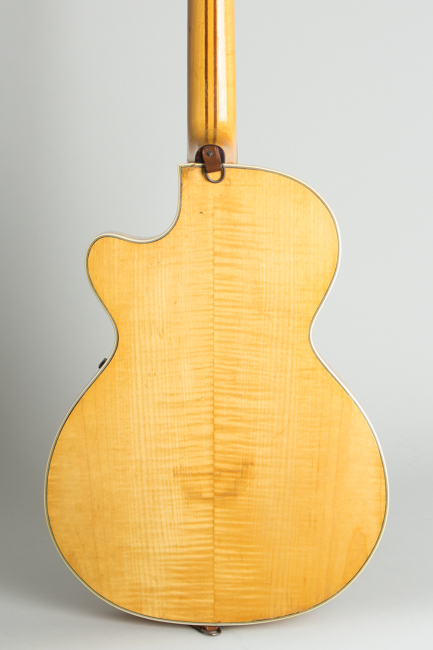 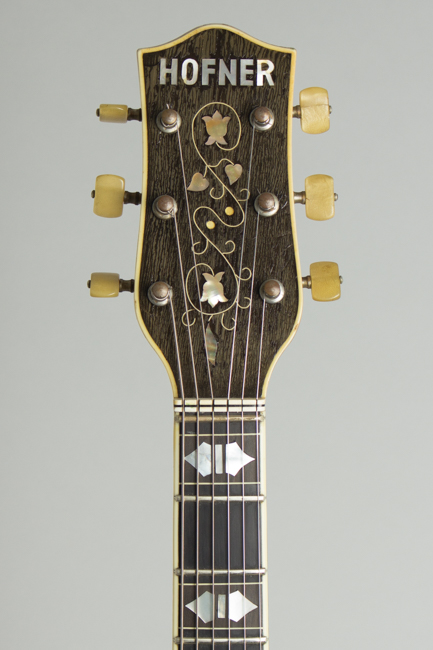 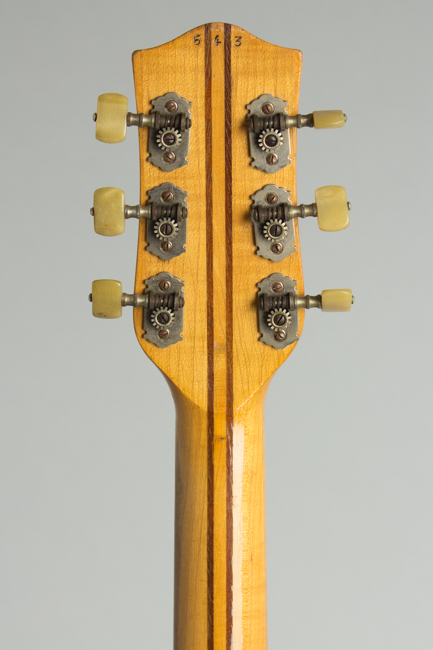 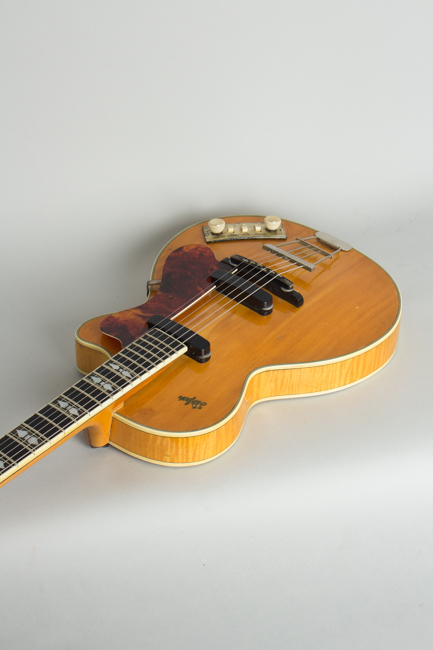 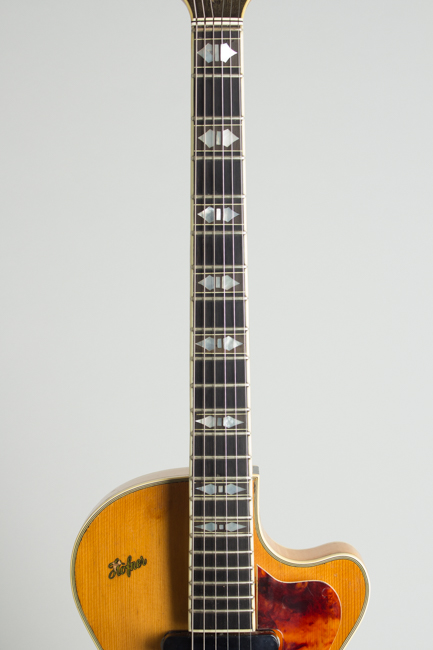 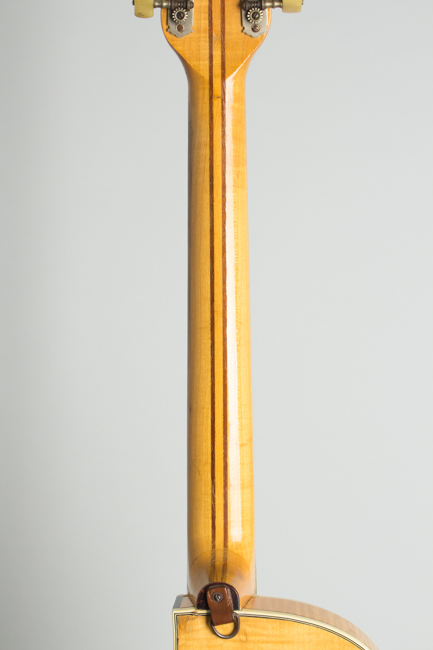 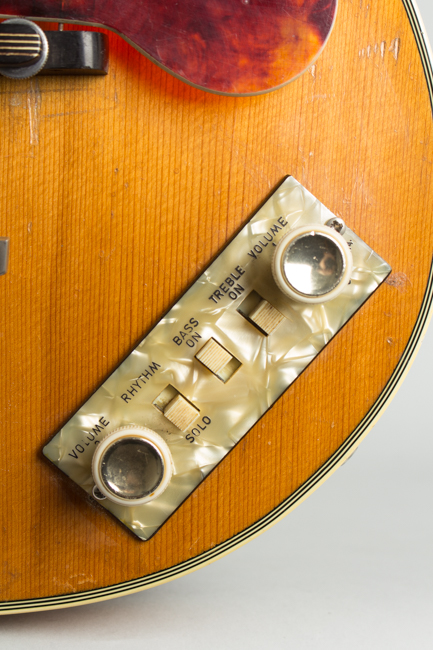 The fancy Club 60 was the top-of-the line version of one of the German Hofner company's most original creations, the Club series electrics. These were a line of small-body slimline arch-tops with no sound holes, quite popular in Europe and especially the UK in the late '50s and early '60s. The Club 60 was a later addition to the line and debuted in 1958; it was adorned with upgraded features including a fancy pearl inlaid ebony fingerboard, a decorative pearl headstock inlay, and the small body multi-bound top and back.

This particular Club 60 has an English Selmer serial number dating to late 1959, when it was one of the best guitars available to the UK market. It has a mix of features with the older 1950s plastic-covered pickups combined with the newer 2-knob, 3-switch "Flick Action" control panel introduced in 1958. It has a nicely ambered natural finish overall, with multiple binding on all surfaces and a tortoise celluloid pickguard. The body is made of laminated maple with a spruce top, with a 5-piece laminate maple neck.

The Club models were among the most popular Beat-group guitars in early 1960s Liverpool and Hamburg; all three Beatle guitarists played the plainer Club 40 model during their early stages as a group. John McNally of the Searchers played a Club 60 on all the group's early recordings, which remain an excellent demonstration of this guitar's capacity as a propulsive rhythm machine.

This original 1950s Club 60 is a rare guitar in the US; they were not imported or sold here when new. Over the years some examples have been mostly brought over individually by Beat fans from Europe. The more expensive Club 60 was the least common of the series, and many of these beautifully made but rather fragile guitars have been lost to time and tide. This is a well-used but super cool Hofner classic, in good-playing condition.

This is a somewhat well-worn but good playable example of this beat-group classic. The neck has been reset (ubiquitous on these) with some visible marks but much less damage and mess than many. The neck heel is solid and has no separations, which is a common problem on these. The nicely aged finish shows checking overall and a decent number of dings, dents, and scrapes, most notably on the top around the bridge. Everything on the instrument is original except some minor wiring rework and newer screws holding in the "Flick Action" panel. There is a bash to the plywood on the back of the body that is solidly but visibly glued up, and is not a structural issue.

The bottom of the bridge saddle was cut down long ago (before the neck reset, likely) and is smaller than as originally made but everything still functions as intended. The large frets cut through the binding are original and correct; it looks wrong, but that is how Hofner fretted these in 1959. The slim U-profile neck is nice and straight until a noticeable drop-off over the body; this again looks odd but does not affect playability; rather the opposite actually, as we've seen Hofners with a serious upkick in the same spot, which can create playing problems!

There are no standard strap buttons per se but there are small leather-and-metal ring fittings for attaching a "dog clip" strap at the heel and tailpiece; this is how it was commonly done in 1959. This veteran beat era guitar probably saw some interesting use back then wears its scars proudly. It still sounds and plays great; close your eyes and play an E7 and you can be transported back to Liverpool or Hamburg in 1960, ready to "Mak Schau". The original rather flimsy hard case is still present and vaguely functional, fine for storage if not recommended for touring in the Commer van! Very Good + Condition.
×