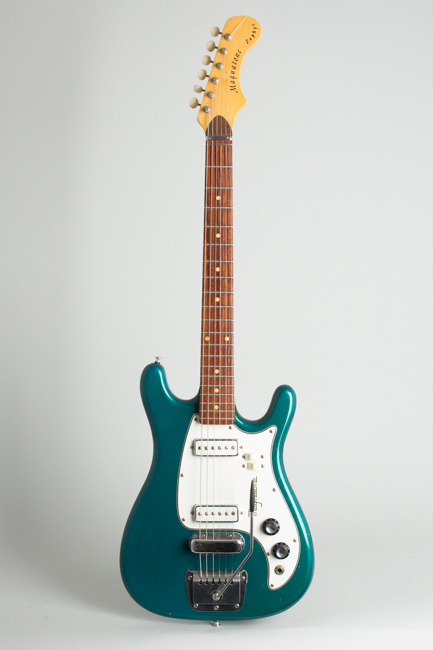 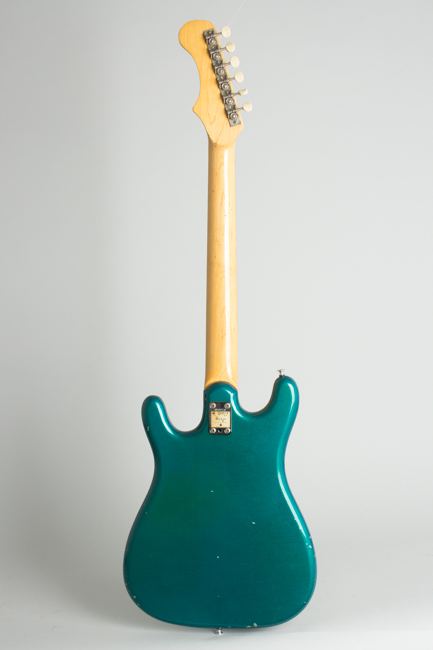 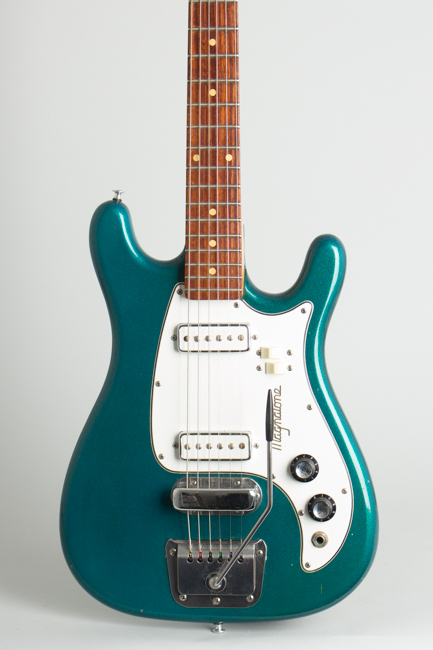 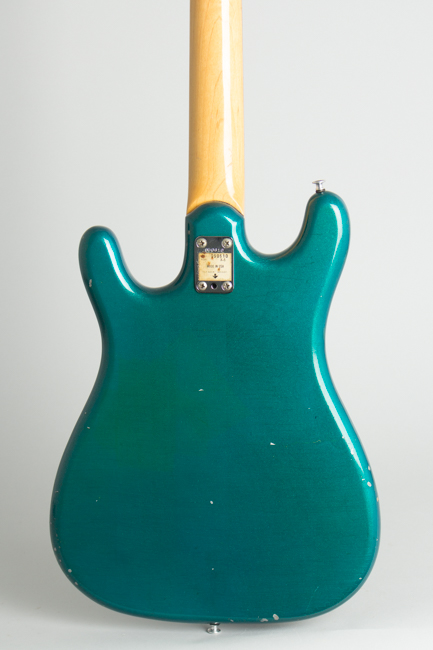 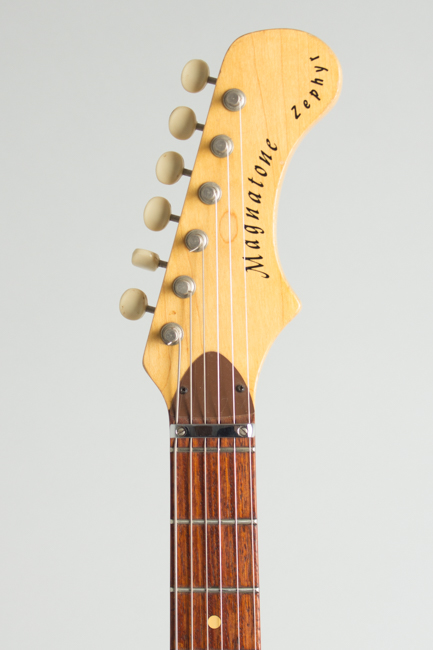 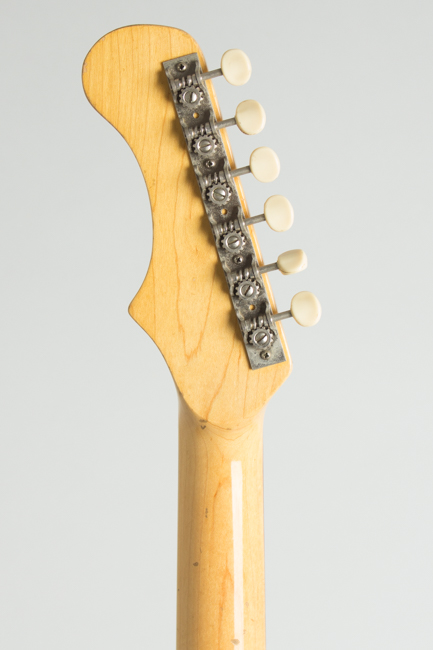 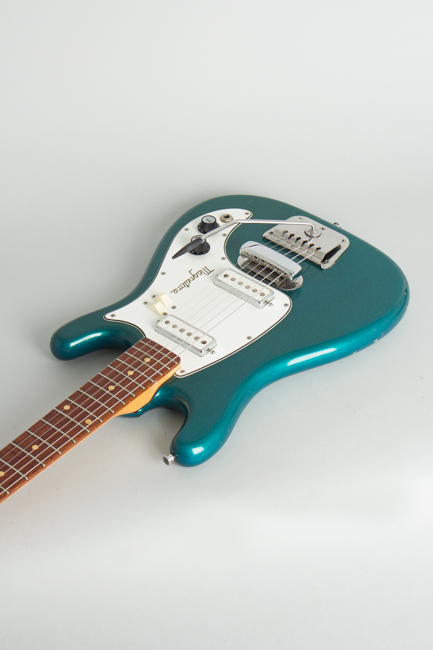 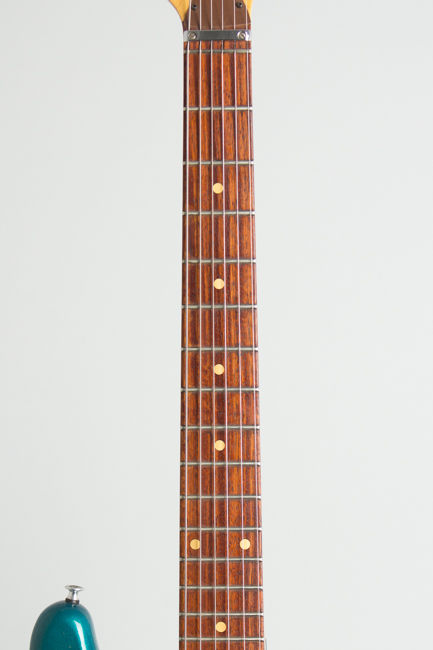 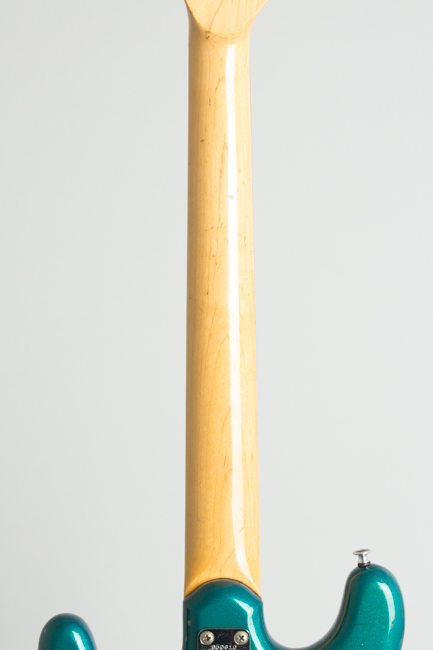 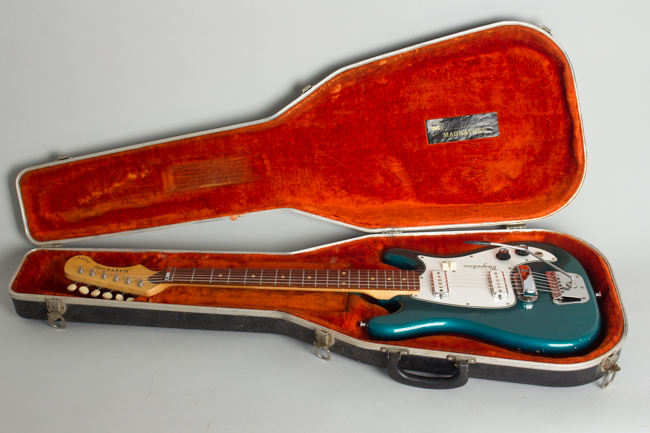 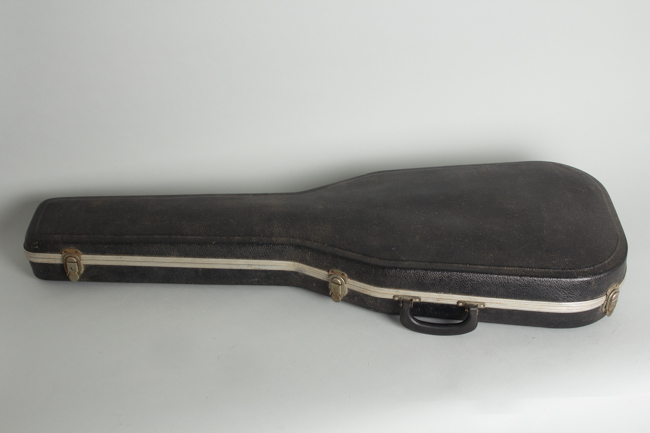 This Magnatone Zephyr is a very interesting 1960s solid-body, from the last series of guitars to carry that venerable California brand. This line was launched in summer 1965 and was out of production within a year or so. These were sleek little twangers dubbed the "Incomparable Magnatone Starstream Slimline (of) personalized electric guitars". The build quality is to a higher standard than many 1965 guitars; "American made, by American craftsmen" was a major selling point.

The X-5 Zephyr was the student model and combines some original ideas with Fender-like elements; the body is rather "Stratty" while the bridge, vibrato, and electronics are more in the Jazzmaster/Jaguar mold. It's fairly certain that Paul Barth was involved in the design -- the instruments share a "family resemblance" to guitars he marketed under the "Bartell" name. Whatever their pedigree, these are well-made, light, handy, good-sounding guitars.

The body is fairly small, with smoothly contoured edges and slimmer cutaway "horns" than a Fender. It is finished in a lovely sparkle-infused blue/green metallic lacquer, one of a number of available colors, but is fairly rare compared to some other options. The Fender-like neck is maple with a rosewood fingerboard. The single-sided headstock is fitted with plain strip Kluson openback tuners. One nifty innovation is a screwed-down metal nutpiece fitted over the strings, forcing them down over the zero fret, an interesting idea that works well. The guitar also features a very functional tilt neck adjustment, similar to what Fender used later, but actually better designed and much more reliably functional.

The floating bridge has a blade on the bottom that rocks in a "V"-shaped piece of metal sunk into the body and individual saddles adjustable for intonation. The trem design is a simple flat plate design instead of the fancier unit used on the higher end models. The single coil pickups are similar in size to Rickenbackers, with a metal outer casing and non-adjustable poles in a white plastic center. These great-sounding units are unique to the Magnatone Starstream, but similar to Bartell pickups produced by Barth in California.

The electronics rig is wired to a top-mounted laminated plastic pickguard with the "Magnatone" logo cut through to the contrasting lower level, a nice cosmetic touch. Although the control layout appears straightforward, it is oddly complicated. The two switches are not simple on/off selectors, but include tone-modifying resistors and combine the pickups in sometimes unexpected ways, with a master volume and tone knobs. The range of sounds is impressive, from some very funky combinations to a remarkably deep resonant purr for such a "surfy" instrument. This sharp-looking, great-playing guitar is one of our 1960s favorites and a great value in a vintage American-made solid-body.

This is a clean, all original example of the Zephyr with just some light chips and dings to the finish, mostly on the body edges. It is complete down to the often-missing chrome bridge cover. We have shimmed the rocking bridge piece solidly which results in much better tuning stability; this can be easily undone if desired. This guitar handles great and plays and sounds very well; it even includes the nifty original molded plastic hard case. Excellent Condition.
×