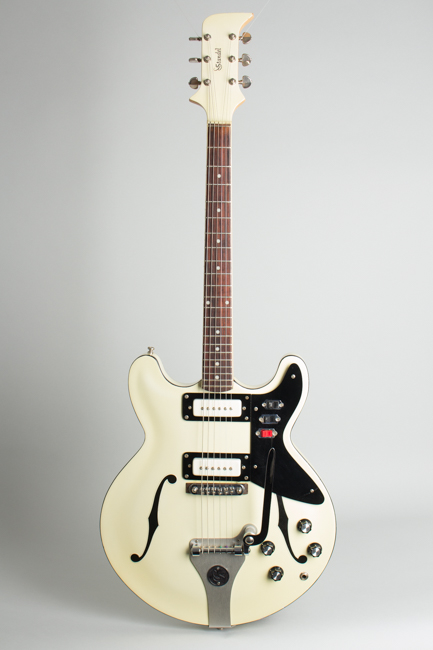 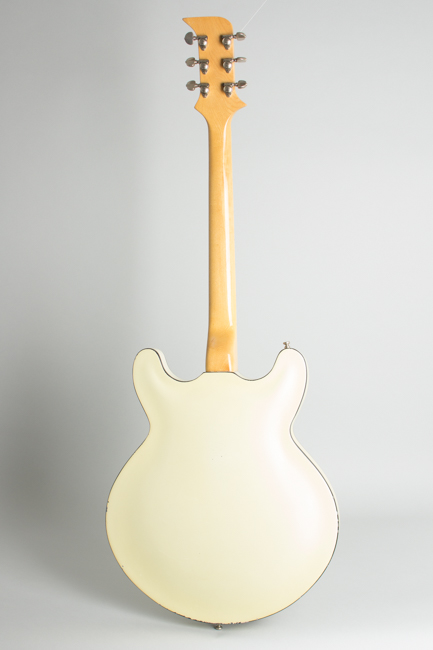 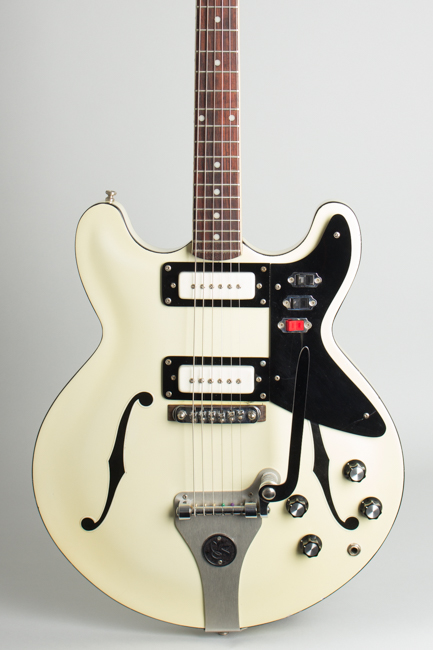 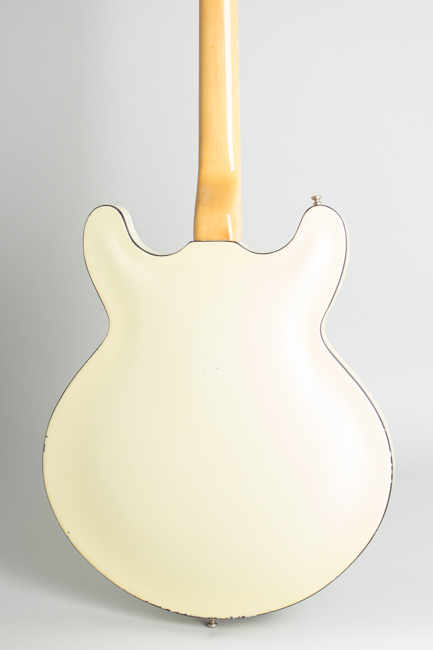 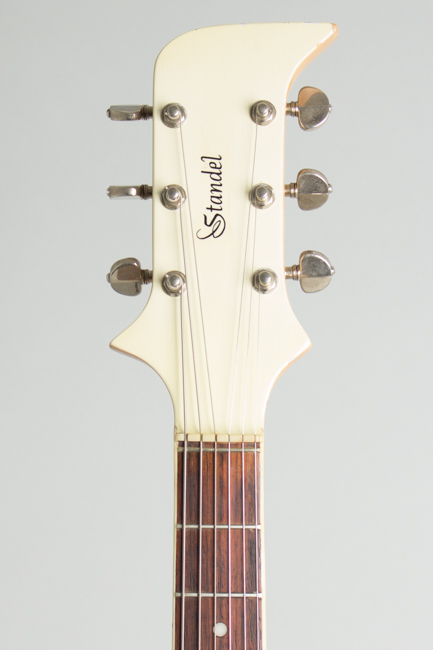 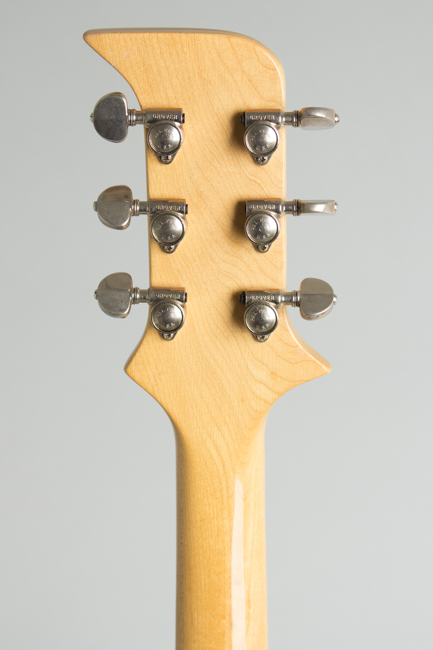 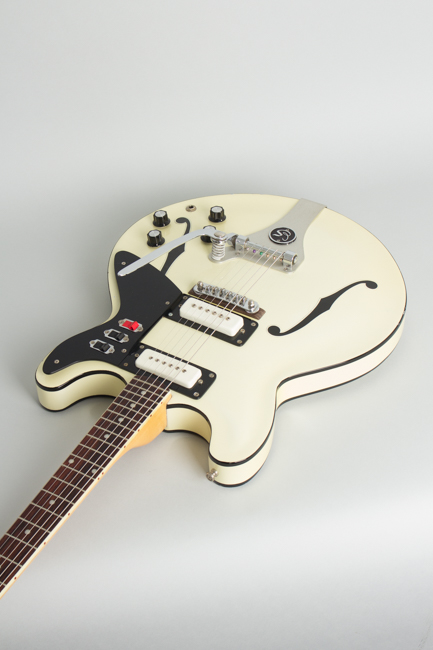 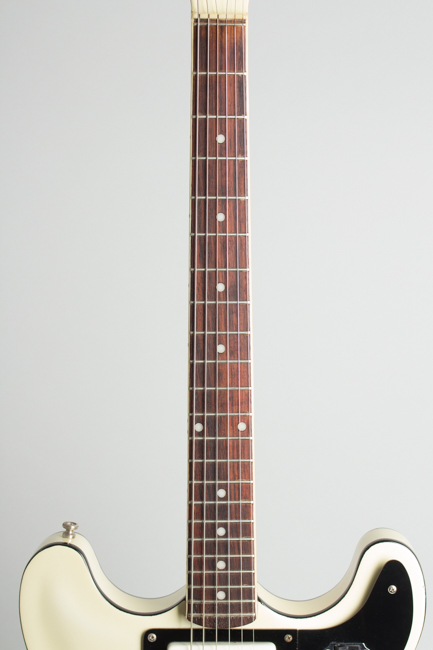 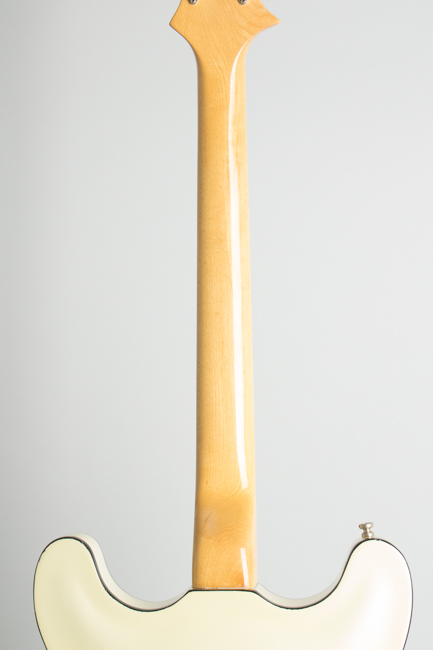 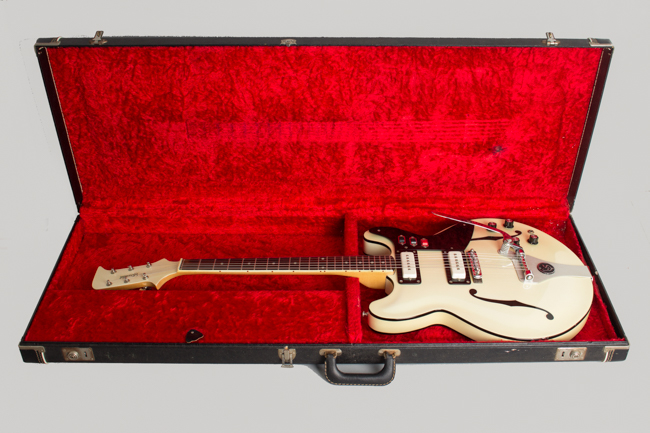 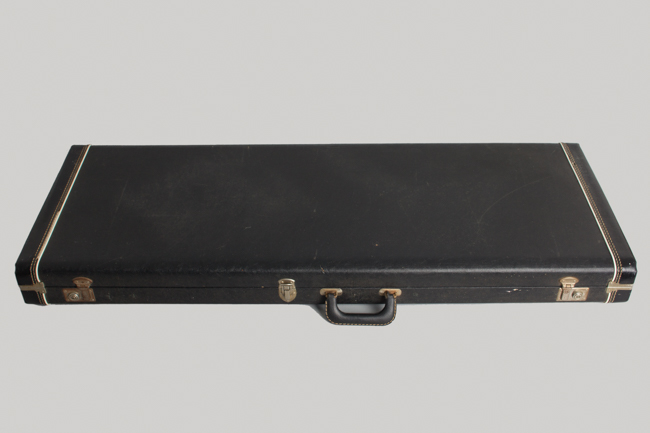 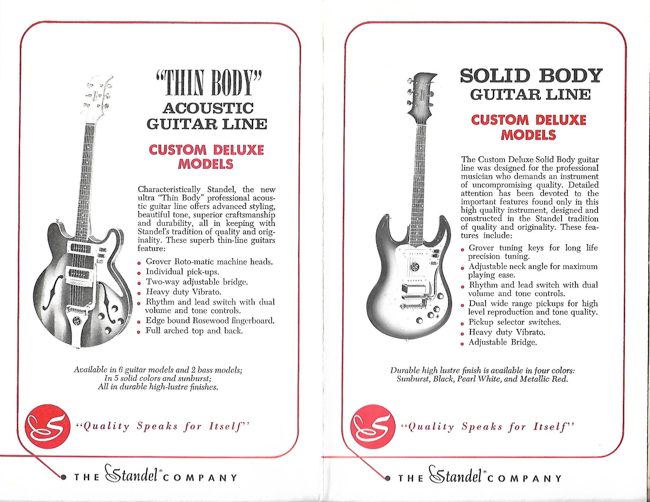 The history of the Standel company is rife with twists and turns, and if they never fully entered the pantheon of great 20th century electric culture icons it is not for lack of honest effort. The best remembered Standel products are the early tube amplifiers of the 1950s and early 1960s; these are still sought after by discerning players today. Like Leo Fender, company founder Bob Crooks was primarily an amplifier man but Standel did make several attempts to enter the guitar market, with commercially mixed results. Still, they are part of the great southern California hot-rod guitar culture.

This Standel Custom Deluxe was part of a line announced in 1966 that consisted of "Standard" and "Deluxe" versions of solid and hollow-body design. Standel's amp factory did not actually build them, but they have deep Bakersfield roots. Bob Crooks had commissioned Semie Moseley to design a "Fenderlike" guitar several years earlier, but that deal fizzled and the idea emerged as the Mosrite Ventures model instead of under the Standel banner.

The most widely credited suspect for building the 1965-7 solid-body Customs is Mosrite associate Joe Hall, as instruments with similar features subsequently appeared under his own Hallmark banner. Another possibility is Bill Gruggett, one of the other Bakersfield guitar building mafia that spiraled around Semie Moseley's notoriously disorganized business. This fiberglass-body guitar may come from another source entirely, as it is actually fairly unique among California creations! Perhaps the bodies were sourced from a boat or surfboard maker...

Whoever actually built them for Standel, the guitar itself is a real California hot rod, despite its somewhat conventional looks. The overall layout of the guitar is similar to a Gibson ES-335, but with a very eccentric twist. The body is molded fiberglass, with a beautiful pearlescent white finish and black painted "binding". The f-holes are simulated, an applique like some Gretsch models. The maple neck has a huge bulbous heel, bound rosewood fingerboard, and the same multi-point-laden headstock as the solid-bodies. The Standel neck is slim and fast, but has more depth than the typical Mosrite and the frets are not as low and flat. The headstock has Grover Rotomatic machines and the face is painted to match the body.

The pickups, bridge, and trem system are all uniquely Standel. The vibrato is simple but efficient, with the company "S" logo on the tail portion. The bridge is a metal plate with roller saddles adjustable for length, mounted on a rosewood base. The pickups have "soapbar" coils with white plastic covers and adjustable poles. These are controlled by individual on/off switches mounted to a floating pickguard. The scheme offers a two-circuit tone and volume control system (selected by the red switch) that seems to offer little in distinct sounds but a handy way of switching from rhythm to lead settings.

The Standel Custom line was pictured in a 1966-dated catalog and produced, apparently in very small numbers, into 1967. This model listed in July 1966 for $399.50 without the case, which added $65. They seem to have vanished soon after. All are rare today, but the solid-bodies seem to turn up more than these hollow models, and this "Deluxe" hollow guitar is possibly the scarcest variant. The similar but simpler "Standard" models have somewhat weaker pickups and simpler switching; this gleaming black-and-white Deluxe is definitely the pick of the Standel litter.

In the late 1960s, Standel hooked up with the Harptone company of Newark, New Jersey and commissioned local luthier Sam Koontz to design a line of hollow-body instruments and set up the production line. These later Standel guitars were offered in a range of models, but are completely different and far more conventional proposition from this instrument. Those guitars maintain an East Coast archtop tradition; this Custom Deluxe is pure California. Standel never really got their guitars off the ground, but we sure are glad they left this striking sleek molded hot rod behind.

This is a very clean guitar overall, with some light wear but all original with no alterations. The finish has small chips and dings overall, mostly to the edges, with the back/side seam at the bottom edge the only area of heavier loss. There is a tightly repaired crack to the lower edge of the pickguard. All hardware is original and complete, and everything works as intended very well. Despite its somewhat unconventional construction, this is an excellent-playing and sounding guitar; definitely a standout in any crowd. Excellent Condition.
×