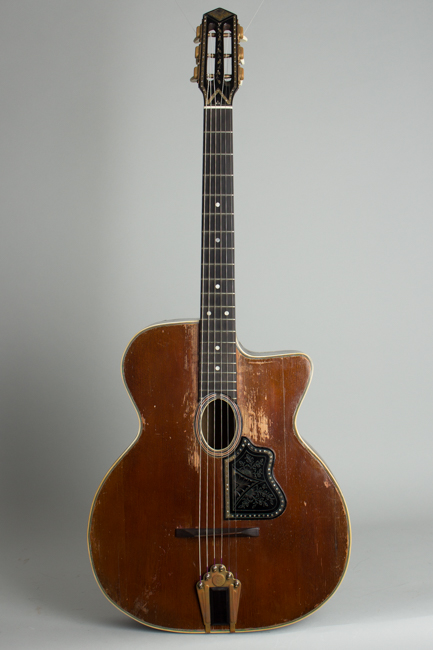 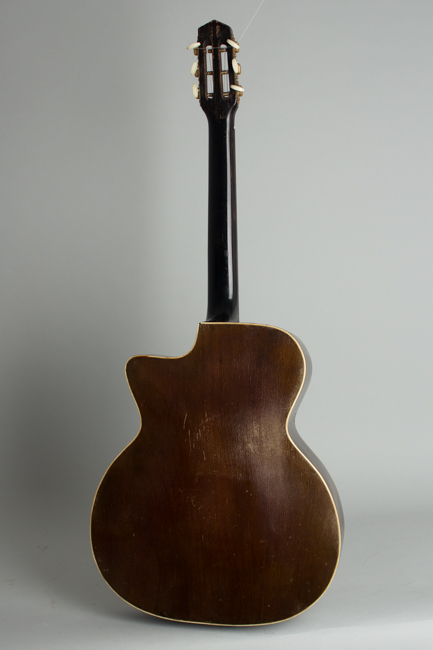 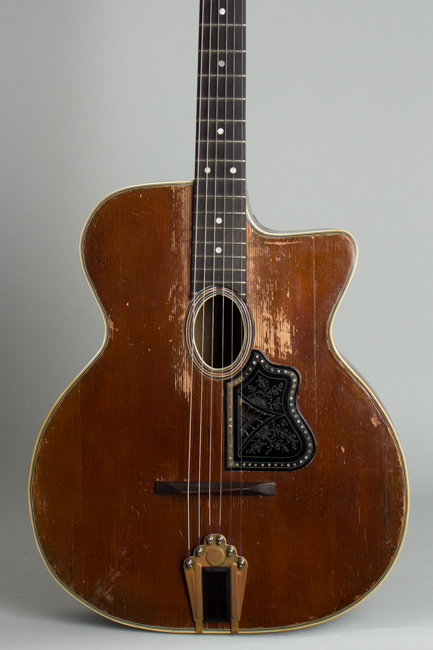 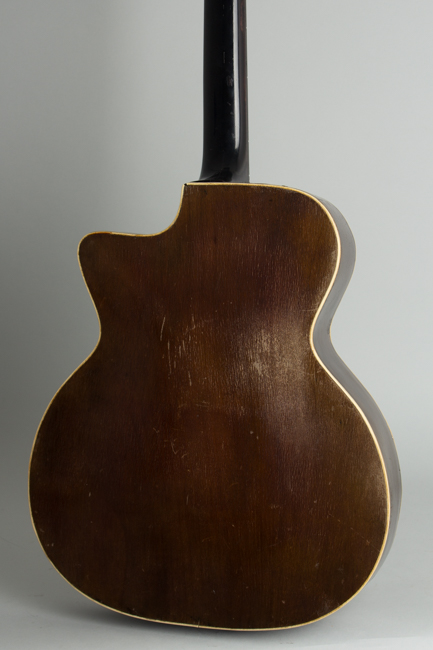 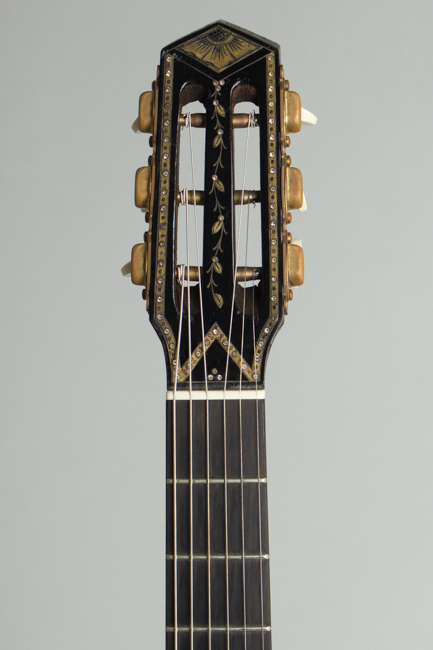 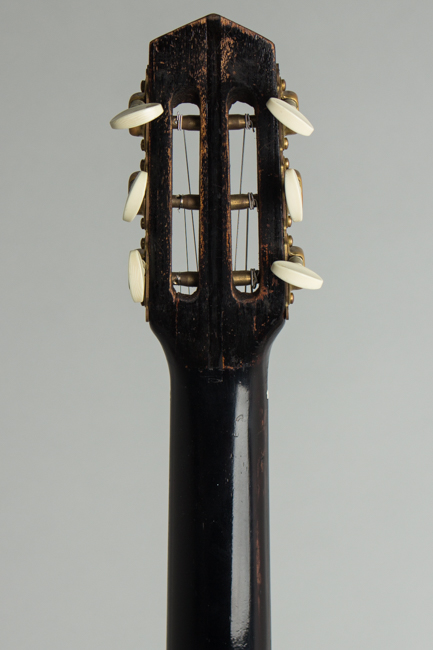 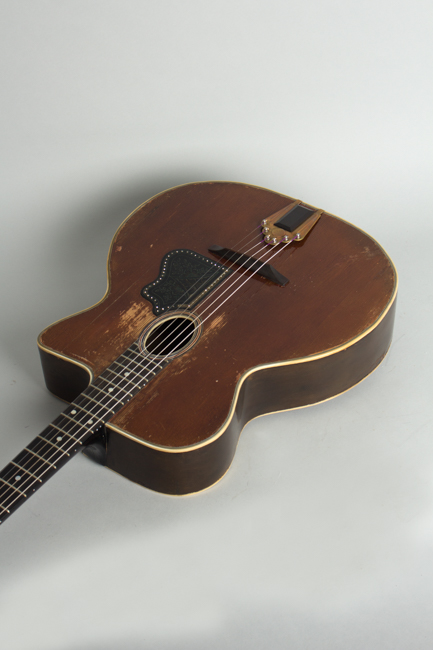 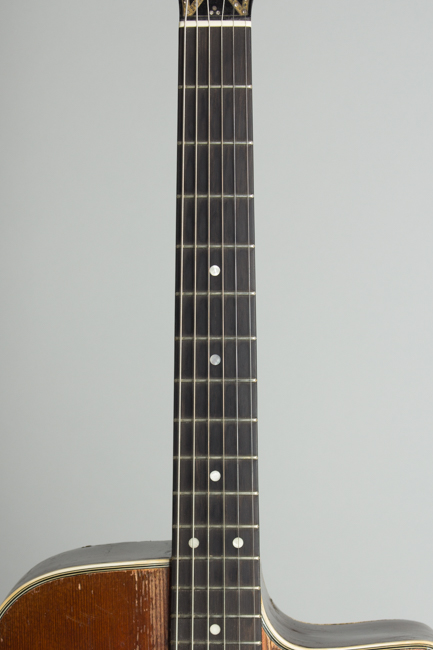 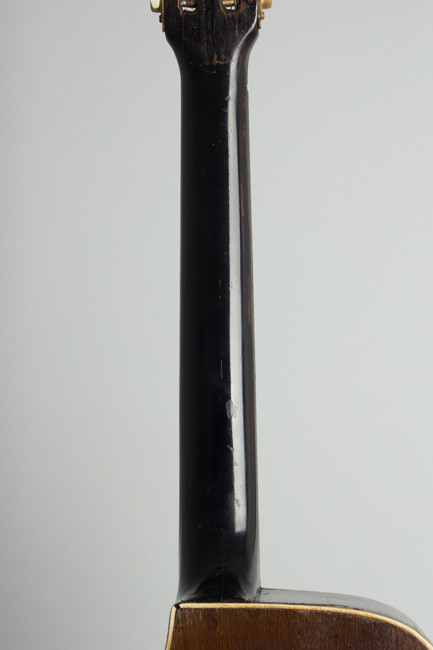 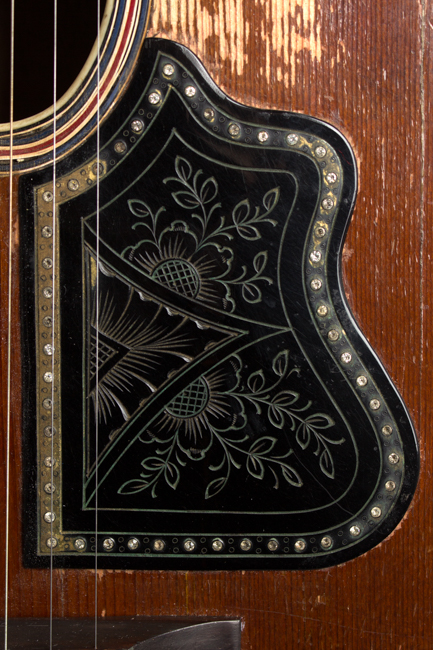 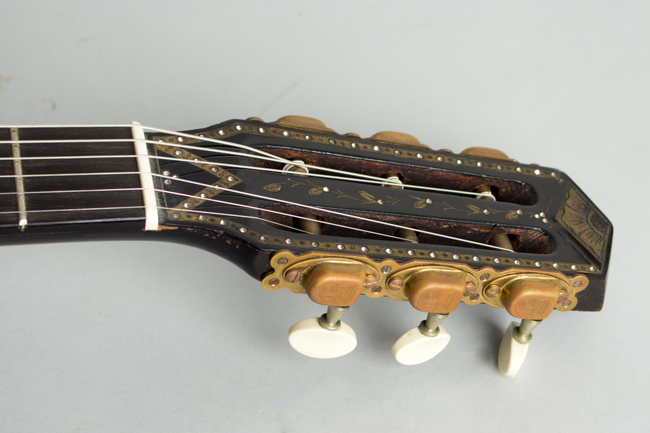 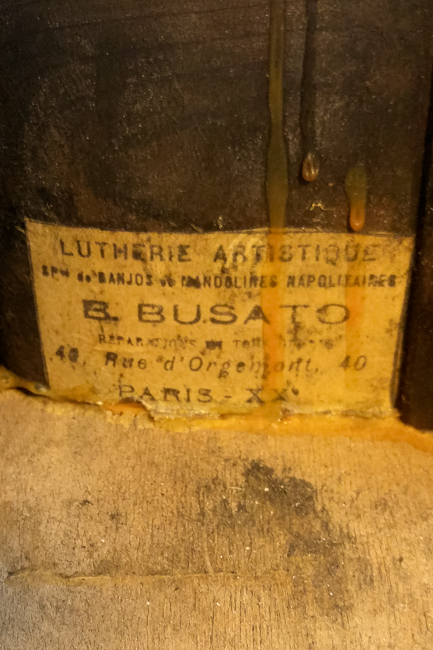 Apart from the extremely rare and valuable original Selmer/Maccaferri instruments, authentic period French guitars germane to the Django Reinhart-derived Gypsy Jazz style are comparatively little known in the US. The original 1930's and '40's Selmers -- the "gold standard" of this type of instrument -- are currently reproduced by makers all over the world today, de rigeur for the enduringly popular Gypsy Jazz style. What is often forgotten is even as early as the 1930s other Parisian builders created their own interpretations of the design, which today even if built to variable standards have an authentic character lacking in modern reproductions.

The guitars made in Paris by Bortolo Busato have long been mysterious, even to most chroniclers of the history of Selmer style instruments. Busato was one of the earliest, if not the first, independent luthiers to copy the revolutionary Selmer design and build guitars directly inspired by Mario Maccafferri's designs for decades beginning in the early 1930s. By 1935 he was selling them out of his shop at 40 Rue d'Orgemont in the XX Arrondismont of Paris, and this guitar carries that label dating it to some time before 1943, when Busato relocated.

This is an unusually fancy instrument for a Selmer-style guitar, but Busato had his own aesthetic and used many decorative motifs on his guitars that are reminiscent of the accordions they were often called on to accompany. It would have been called a "Grand Modele" meaning it is a higher quality instrument; the "Petit Modele" was plainer and less expensive. This instrument is at the high end of Busato's offerings.

This is an earlier style 12-fret instrument with the smaller "petit bouche" oval soundhole adopted by Selmer in 1934-5. This guitar is an older 1930s pattern instrument (by the 1940s the 14-fret neck was more common). The headstock has gold-painted engraved trim with quite a few inlaid rhinestones. A similarly engraved and rhinestone'd composition pickguard is fitted to the top, which is itself stained dark and multi-bound. The back is laminated and arched, with shaped cross braces and the bridge, tailpiece and tuners are typical period fittings.

Many prominent players (including Django Reinhart himself) have employed Busato guitars since the 1930s. They come in many variations, and there are endless variations in the details, but nearly all agree that they are second only to early Selmer Maccafferi instruments in sound quality, and in some cases judged superior. This instrument has been completely rebuilt possibly more than once; typical of many guitars with a Gypsy jazz pedigree the instrument shows a LOT of play wear and extensive repair. Even so this is a great-playing and lovely-sounding authentic period Parisian guitar, something not often seen anymore -- especially in the US. Playability is excellent and the sound is huge and fully suited to a range of styles, not just the Django-inspired style these are often pigeonholed in.

The top has been delicately re-braced in a more American style, with a generally Martin like X pattern. All internal work is exceptionally neat. The ebony fingerboard was replaced, the neck reinforced with a twin light non-adjustable graphite rods and the newer frets are somewhat larger than the original style. There are multiple repaired cracks to the top and cutaway area, neck heel and side adjacent. There is some sort of wear almost everywhere. The top shows a lot of pick marks near the soundhole, and the back shows the result of probably hundreds of hours of play in steamy clubs somewhere. Most of the finish remains original with some topical touch-up, only the back of the neck and heel have been totally oversprayed.

With its now trans-Atlantic construction this is a totally unique instrument. It is light as a feather, exceptionally loud and powerful sounding but with an underlying sweetness often missing in the original Parisian instruments, which tend to the brash. This instrument is beautiful in many ways, from its elegant jeweled look, decades of wear and now hybrid sound. It holds many stories no doubt, and has many left to tell. It is housed in a more modern tweed HSC. Very Good Condition.
×