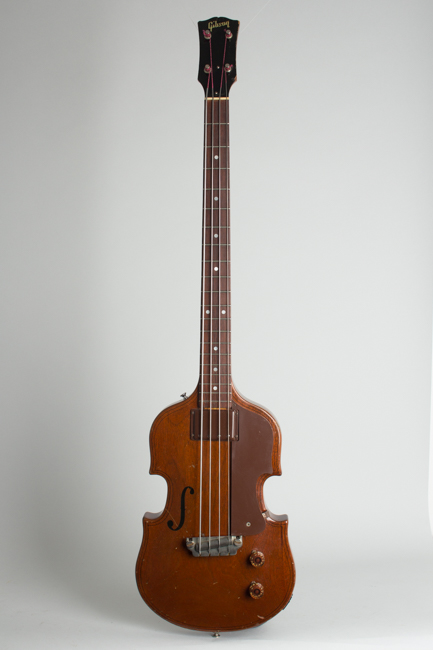 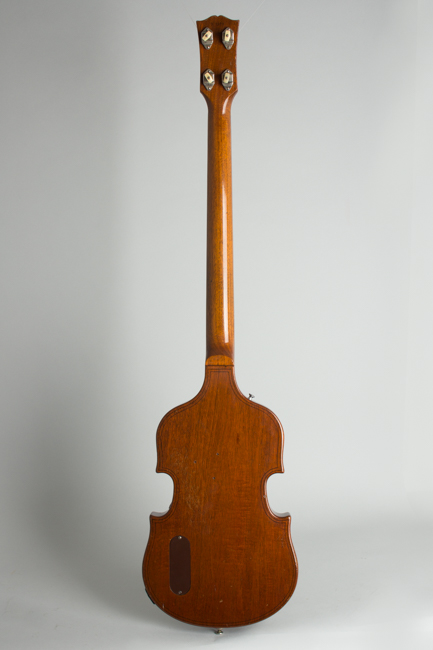 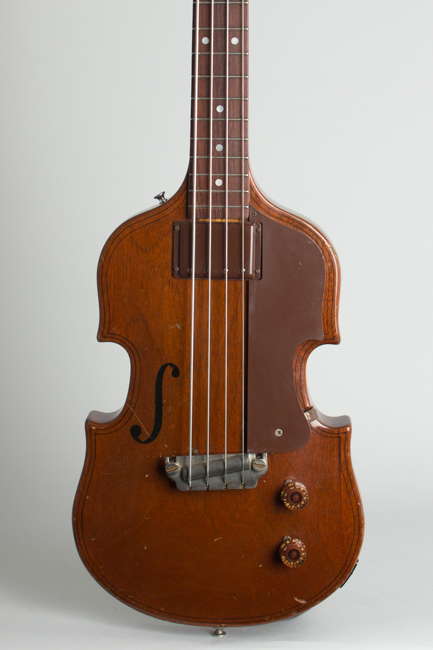 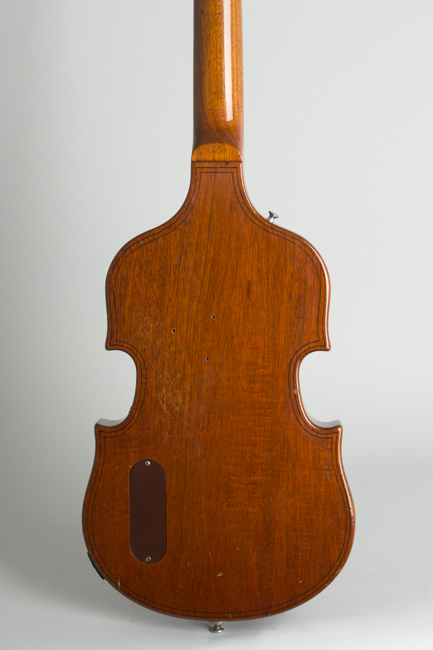 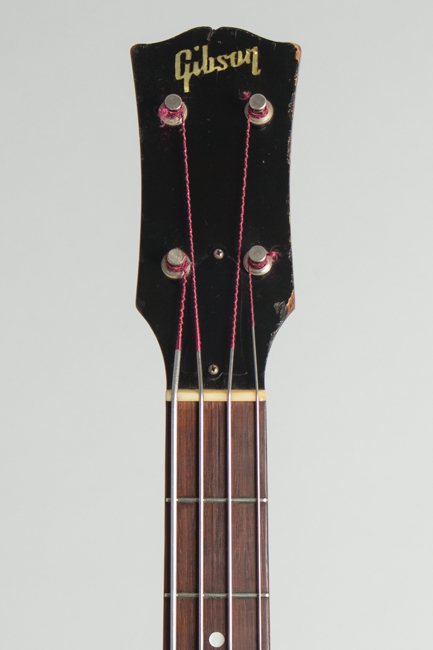 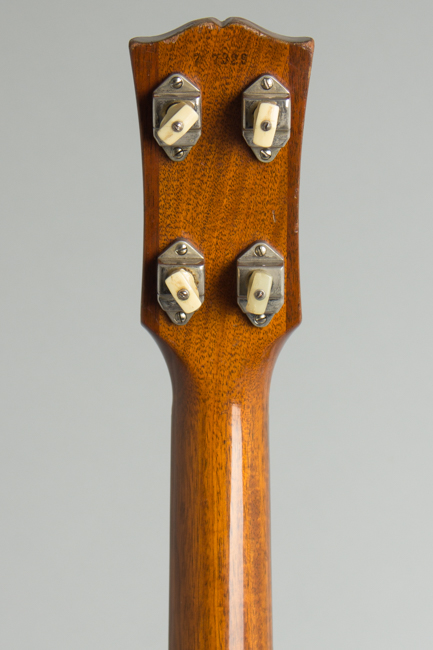 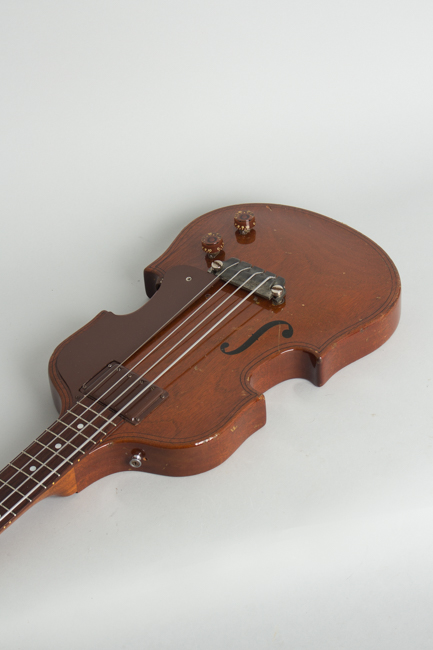 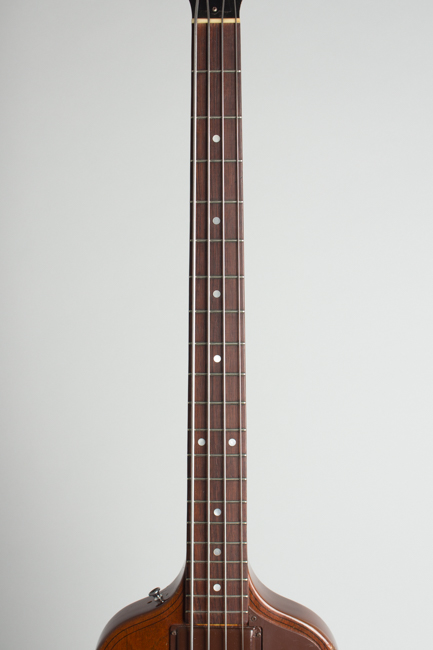 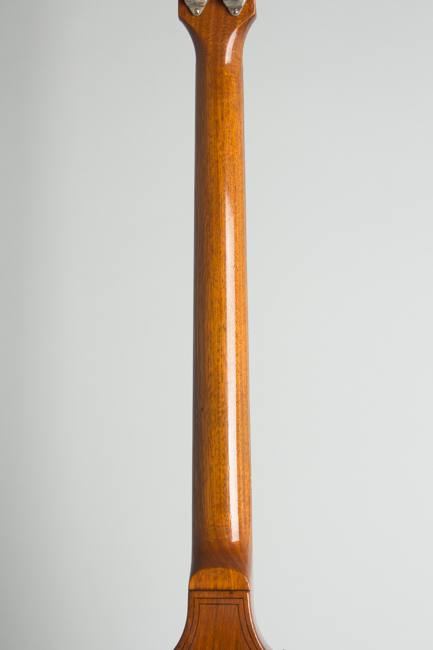 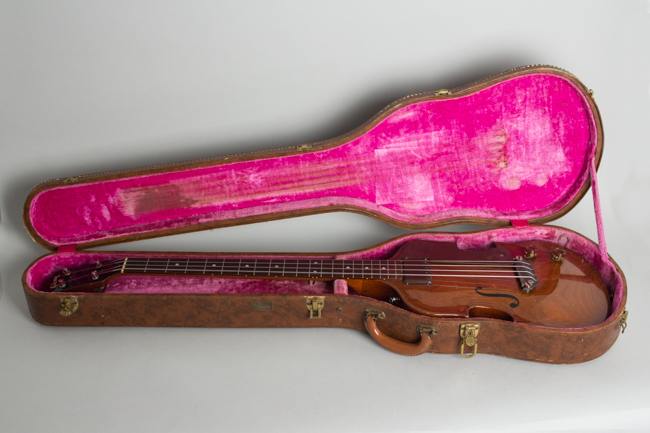 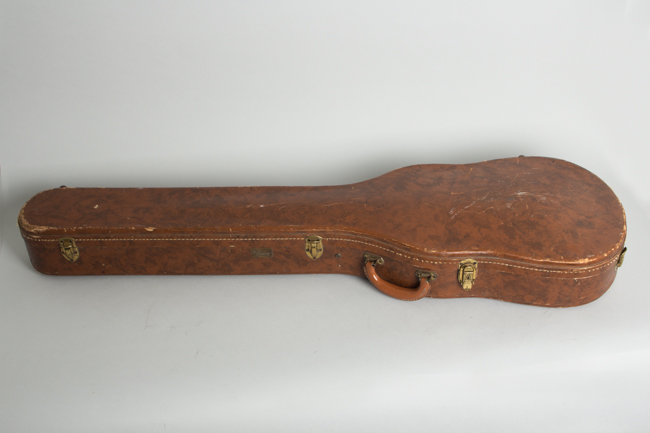 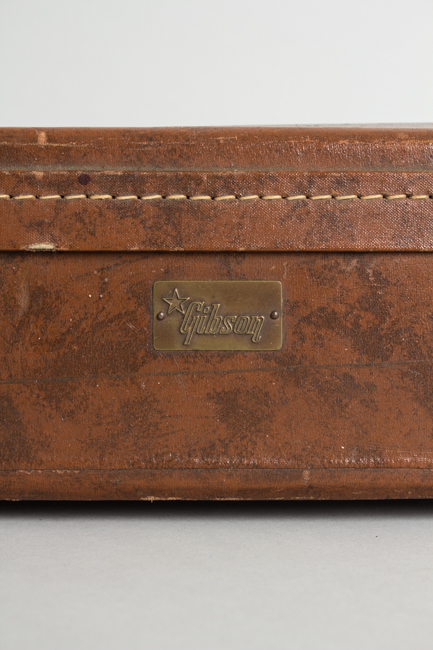 We think this model is just about the coolest and most distinctive electric bass ever designed -- if one of the most eccentric! The "Gibson Electric Bass" (the EB-1 name was not used until 1958, when the semi-hollow EB-2 debuted) was first issued in mid-1953 as one of the very first solid-body basses. The "fiddle-shaped" body design was unique at the time and owes nothing but general concept to the slightly earlier (late 1951) Fender Precision -- and was likely a subsequent inspiration to Hofner in Germany. Gibson president Ted McCarty was appalled by the "crude" Fender Bass and wanted something that was elegant and as different from it as possible, and that's what his Kalamazoo team delivered.

When introduced, the violin-body EB was heralded as "a revelation in rhythm" by Gibson's sales department. This particular bass has a serial number dating to mid-1957, marking it a fairly late example. The EB sold all of 79 units that next-to-last year; the model had been in production since 1953 but sales had not been all that encouraging. In 1959 the newly-renamed EB-1 was replaced by the simpler slab-bodied EB-0, which was easier and cheaper to make with all the same playing features. Gibson's records indicate a total of only 546 of the violin-body basses were sold over the entire decade.

This later 1950s EB-1 has the dark sonic character of all early 30" scale thumpers from Kalamazoo. The large brown Royalite-covered pickup is actually a single coil unit; the huge 25,000 turn coil is mounted on its side, which is why the pole pieces sit at the bottom end. Very powerful and deep-sounding, this particular pickup sounds pretty much indistinguishable from the 1959 and later humbucking versions with just a bit more clarity in the midrange.

The sculpted solid mahogany body has painted-on f-holes and "purfling" like a violin-family instrument, and a large (and seemingly superfluous) brown Royalite pickguard on the treble side. Even the tone and volume knobs were tinted brown. The tuners at the top of the 30 1/2" scale mahogany neck are Kluson banjo units with keystone plastic buttons -- an odd choice Gibson persisted with up through 1960. This set has one slightly mismatched color plastic button; these peg buttons can be somewhat fragile in operation so this was possibly replaced early on.

The Gibson Electric Bass has remained a connoisseur's oddity since its introduction. Although seen during the 1950s in the hands of the Flamingos, jump blues bandleader Lloyd Lambert and most visibly Little Richard's Upsetters, the instrument never caught on with players in a big way. In later years Felix Pappalardi, Jack Bruce, Doug Lubhan, and even (on occasion) John Paul Jones have made use of the Gibson EB, and it remains one of the company's most distinctive creations -- even if seeming a bit whimsical in retrospect. This later model is a somewhat worn but great-playing example, with the essential thump intact.

This bass has some general wear overall but remains almost all original and in fine playing condition. There is finish wear overall in the form of dings, dents, and scrapes with a few deeper digs into the body edges. The back has less wear than some but does show several small and somewhat inexplicable screw holes...possibly someone tried to mount a saxophone strap holder or something similar there.

The original hardware is intact including the tuners, bridge and pickguard, and the unique pickup and wiring rig. The only changed part is the always broken original plastic jack plate, replaced with a more functional black metal piece. The top strap button remains in place; there is a second screw hole just next to it where it was re-located long ago.

This bass has the original small frets in excellent shape and is an very fine player, set up with flat wound strings with the very dark sound typical of Gibson 4-strings. It shows wear overall but is a nice solid-playing example of this most bass-centric of electric basses with its original character completely intact. It includes the original brown HSC but not the extension pin for upright playing. Overall Excellent - Condition.
×