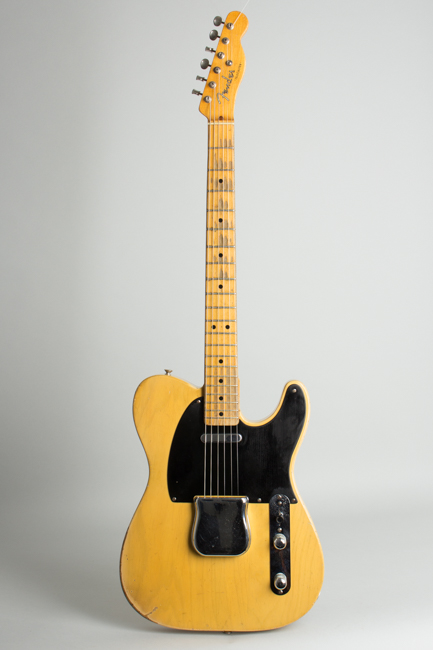 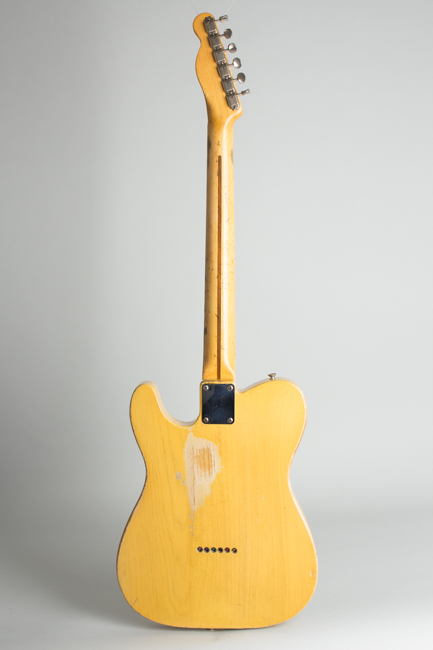 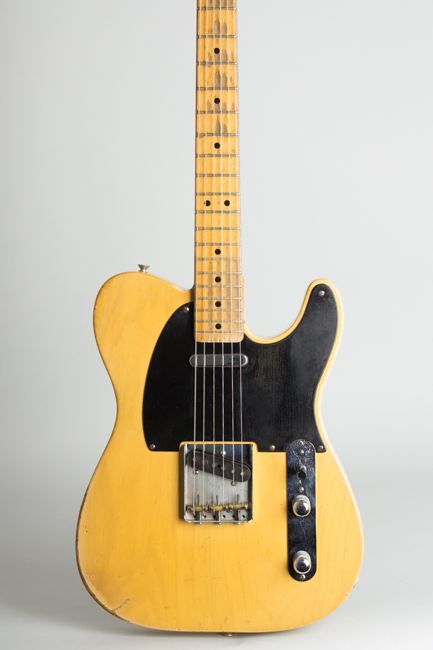 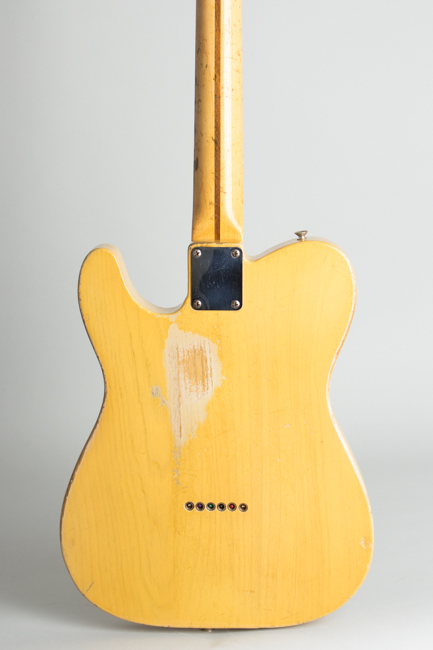 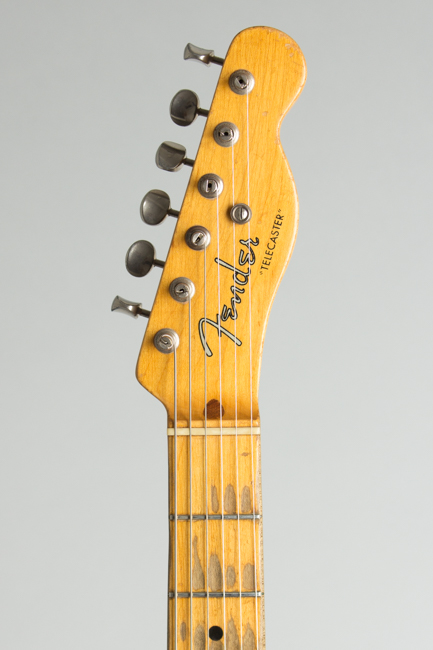 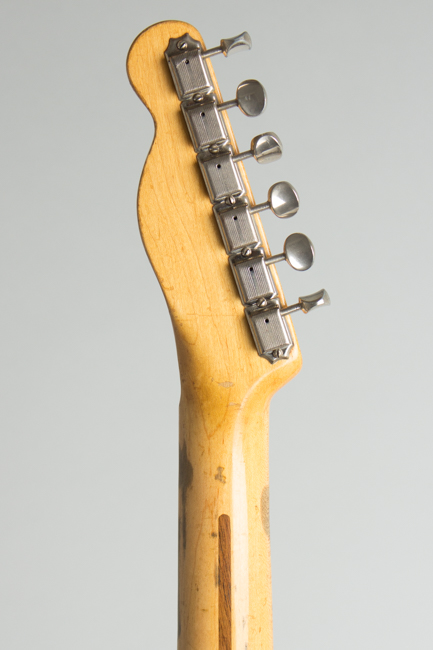 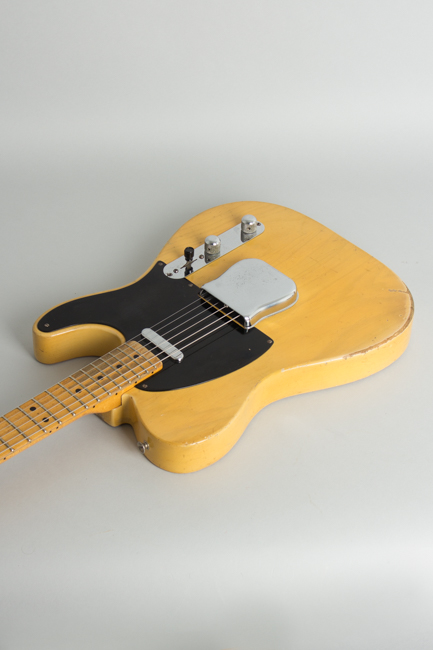 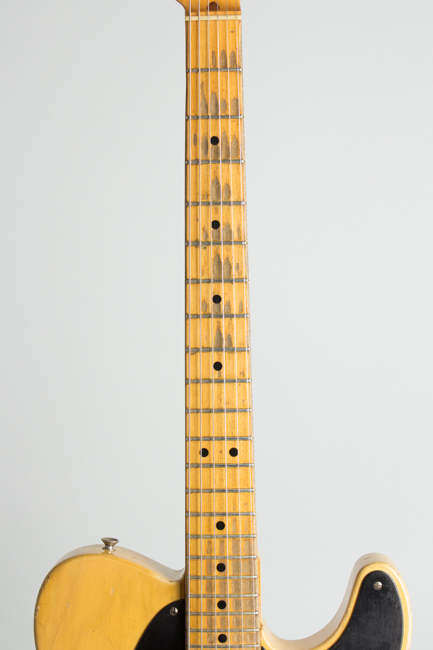 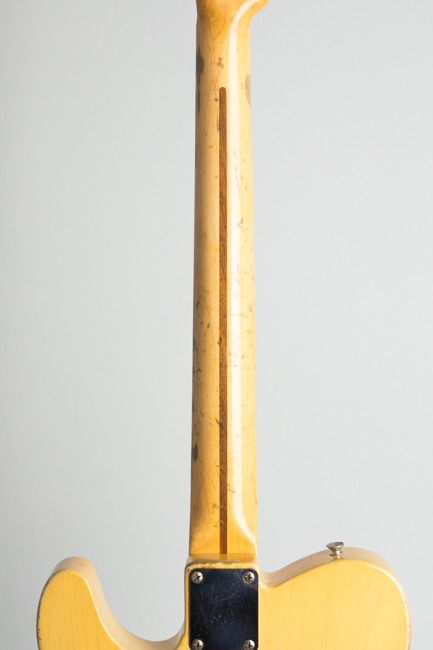 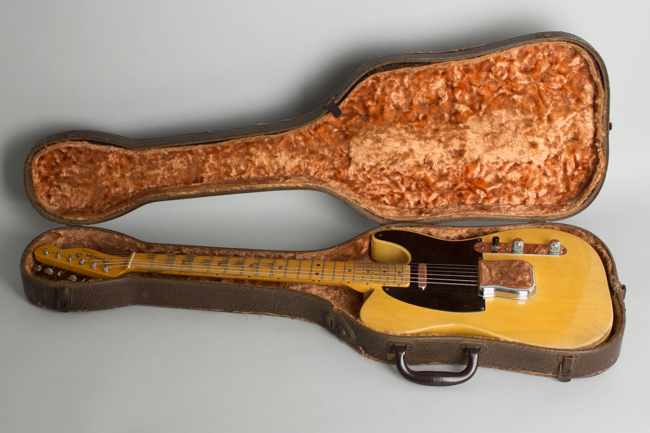 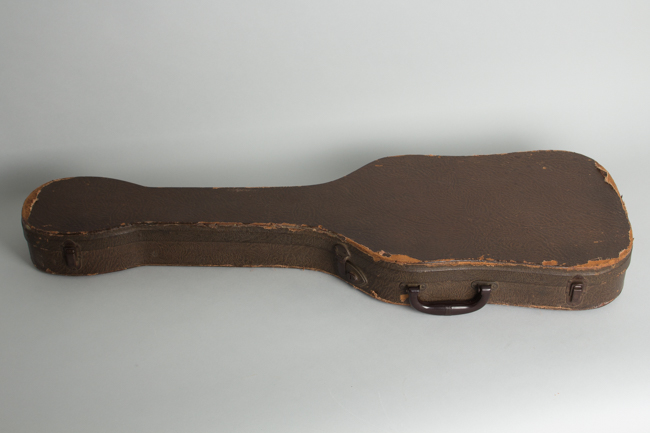 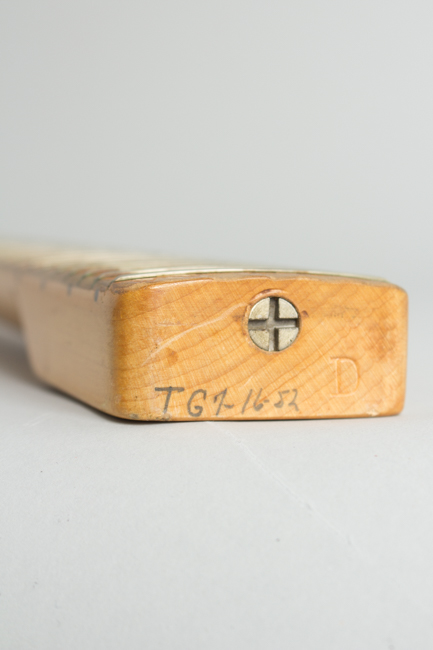 This is a super example of a "Blackguard" Telecaster -- the guitar that put Leo Fender on the map for all time -- assembled at the company's original cinder-block factory in Fullerton, California towards the end of 1952. It has all the classic '52 Tele features: the one-piece maple neck, aged "butterscotch" blonde-finished ash body, lacquered black fiber pickguard, brass bridge saddles, and of course the original black-bobbin hand wound pickups with a sound for the ages! At 7.3 pounds with the bridge cover on, this is one of the lighter "Blackguards" we have had.

This guitar carries the serial number 2680 stamped into the bridgeplate, with a neck date of 7-16-52 in pencil on the heel alongside the initials "TG" for Tadeo Gomez, who left his mark -- literally -- on most Telecasters from this period. The body carries a date mark of 10-31-52 in the neck cavity, with a penciled "Eddie" beside -- he was responsible for a number of Tele bodies in 1952. The 3-month gap between these parts is not unusual on many early Fenders, which were assembled from a stash of pre-finished parts as needed. One of the pot date codes is legible except for solder covering the last digit, reading 140-22x designating the 20-something week of 1952.

This guitar has been played but not abused since it was shipped out in late 1952. ALL parts remain original including the early wiring rig; unlike many, it has never been re-wired to the "modern" Telecaster switching scheme. As originally set up there is a "deep bass" capacitor on the neck pickup in switch position # 1; position #2 is the neck pickup in normal mode, and #3 is the bridge pickup with a master tone control. The neck and bridge pickups can be combined by carefully lodging the selector between positions #2 and #3, which works better on this guitar than some, giving a very bright Strat-like quack.

The very comfortable neck has a nice, round profile somewhat slimmer in the lower positions than some '52s. These necks were all handmade and are somewhat variable even in a given year. The tuners are the older "closed shell" Patent-pending Kluson Deluxe, which had mostly been used up by this point. The screws are mixed flat and Phillips-head types as is customary for 1952.

For many players and Blackguard fans, this is THE classic Telecaster year. '52s have the look and feel of the earliest Fender Broadcaster and "No-Caster" guitars from 1950-51, but more consistent production standards. Many of the fine details of the instrument continued to gradually evolve as the decade went along, but '52 is the benchmark year for comparison to all later Fender guitars, and the year Fender has generally selected for basing its re-issues on.

Before the introduction of the Fender Stratocaster in 1954, the Tele and Precision Bass were the company's most innovative and sensational products. In 1952 they were already causing a revolution in playing styles and shaking up the guitar world in a big way. At the time the Telecaster was totally unique in look, feel, and sound, and became instantly popular, particularly with country players. In the years since, many players and collectors have come to consider the 1952 Telecaster the finest electric guitar ever made -- and one of the most important as well.

In his authoritative and beautiful book "The Blackguard", author Nachos Banos references this, calling '52s "a personal favorite" and stating, "The neck feel and lead pickup sounds from these ... make them some of the best Fenders ever made". The early Fender Telecasters of this period are universally considered as one of the most collectible and historic of all electric guitars, and this is a very nice original example.

This is a nicely original guitar, with the only alteration being an older refret and the attendant replaced nut. The wire is just slightly larger than Fender spec from 1952, and could be reworked as desired. The guitar plays fine as it stands. Overall it shows some typical finish wear but no other repairs or alterations. As is common with these slab-sided instruments, the lacquer is rubbed away to varying degrees on the edges of the body, and there are dings and dents scattered around, but the finish has not darkened heavily and shows only moderate checking.

There is one notable scrape to the top by the arm wear spot, some deeper dings on the edges, and a chunk of belt buckle wear on the back. The pickguard is the original lacquered fiber and has scuffing and on the top surface; the lacquer has worn down to the "striped" pattern often seen on older Telecaster guards below the string line. There is a spot of missing finish on the heel of the body above the neckplate.

The neck finish shows a decent amount of wear on the back and edges, but most notably on the fingerboard down to around the 9th fret (from play) and the upper area over the body (from strumming, it looks like...or someone liked playing the really high notes!). It's pretty evident why this guitar was refretted -- someone played it a lot, and not just in the "Cowboy Chord" zone. All hardware is completely original including the tuners, pickup, wiring, knobs, and bridge components, and the original solder joints appear untouched. The chrome is still shiny with some typical light scratching and wear.

This guitar appears to have been played quite a bit over the last 65 years, but never altered, which is the real miracle here. So many of these were literally played into the ground, refinished, fitted with humbuckers, and generally abused; it is always a treat to find a purely original example. Even the "ashtray" snap-on bridge cover is still present, and the clean condition of the bridge pieces suggests it was left on while the guitar saw much of this venerable use. All this, the original shaped hardshell case, AND it SOUNDS fantastic too, exactly as it should! Overall Excellent - Condition.
×