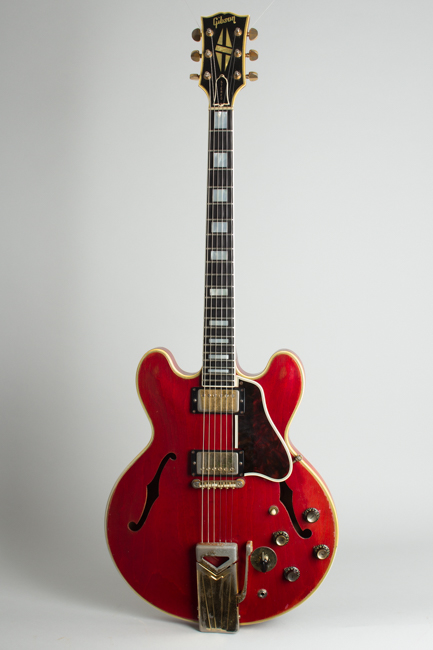 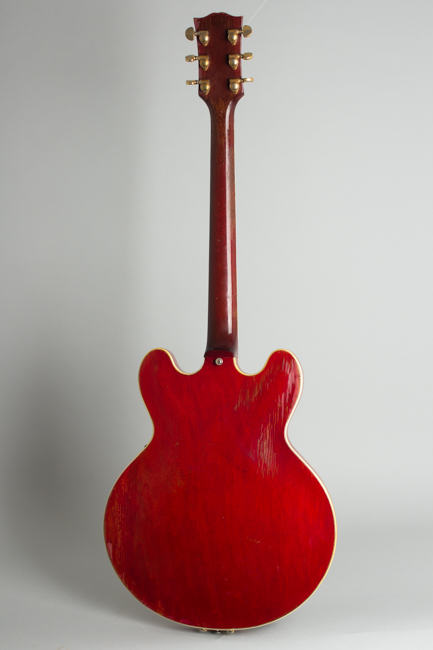 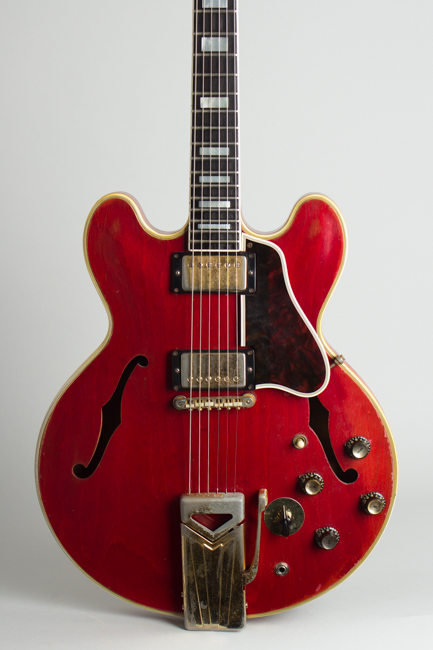 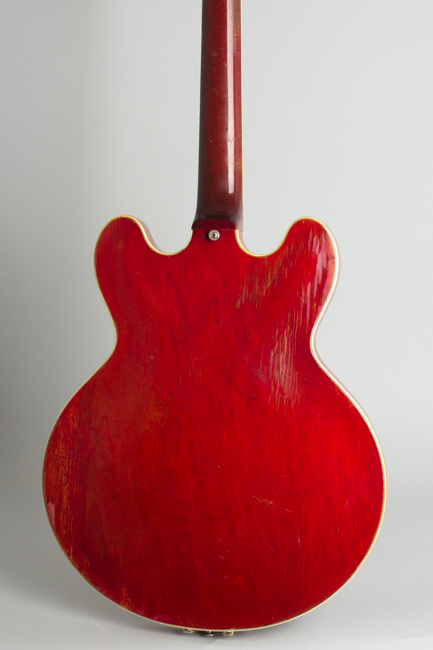 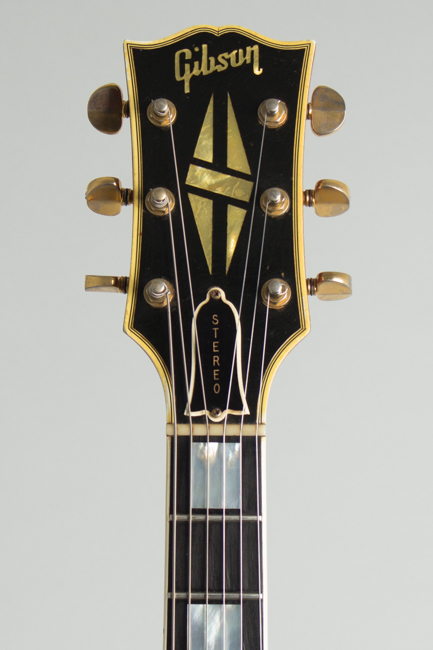 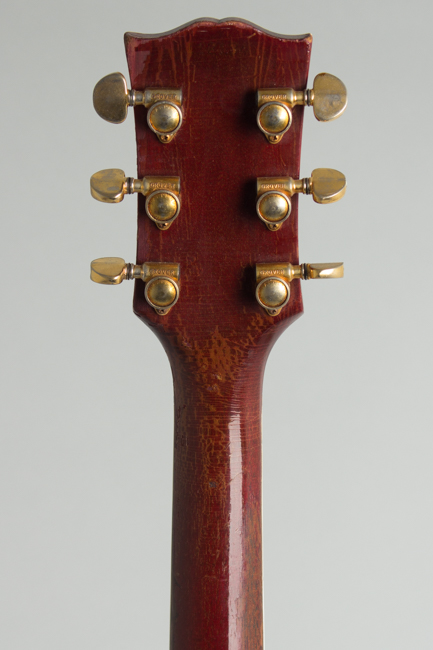 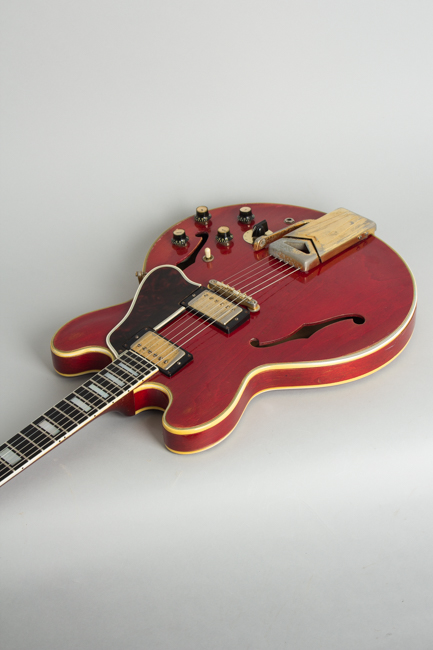 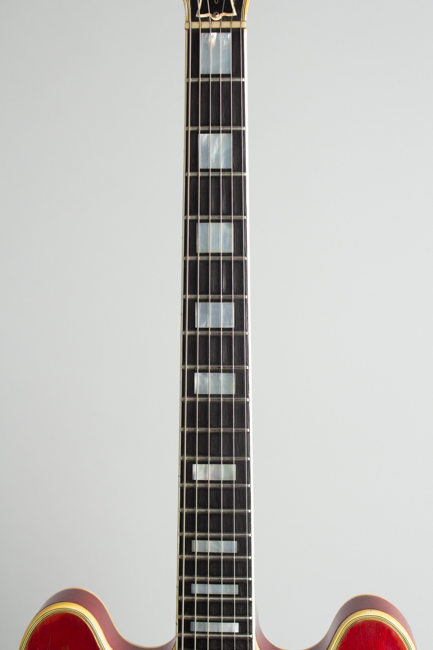 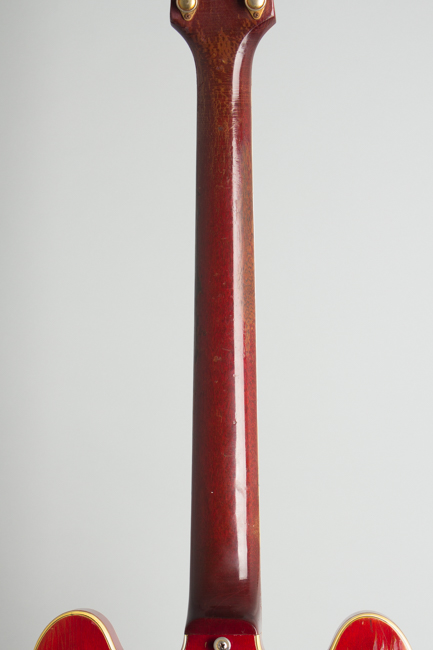 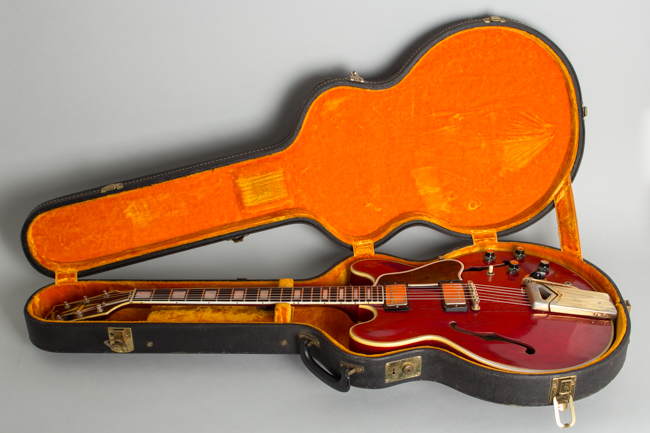 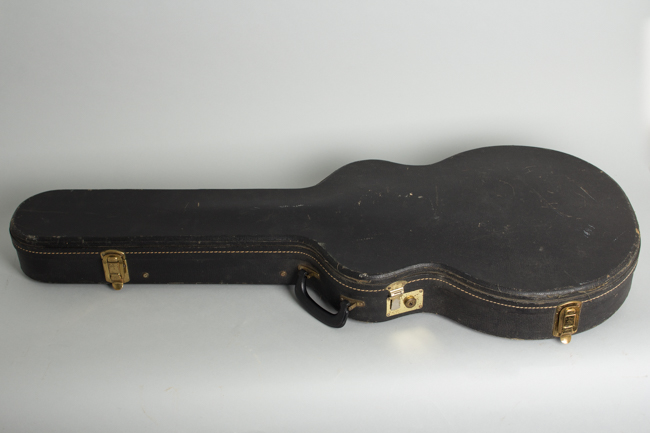 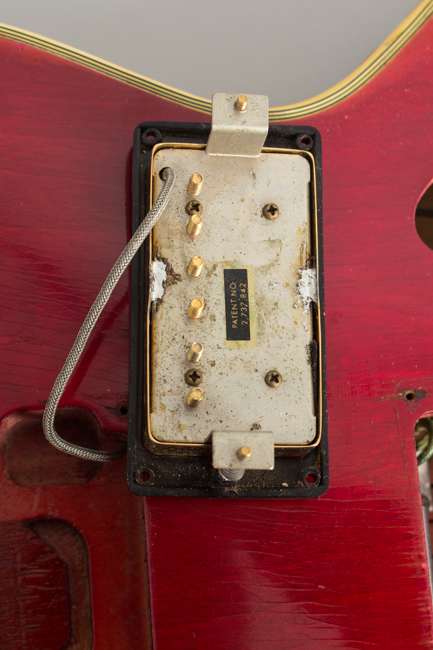 The ES-355 was the flagship model of Gibson's most successful late-1950s innovation -- the semi-solid electric guitar. Following quickly on the heels of the ES-335, the 355 brought high-end features like an ebony fingerboard, pearl block inlay, multiple bindings and gold plating to the table topped off by the Super 400-style split-block headstock inlay. The Bigsby vibrato was a standard fitting when the guitar was introduced in 1959; this 1963 model has a late example of Gibson's "side-to-side" Vibrola tailpiece that was then being phased out.

This guitar has two early "patent number" pickups with the Stereo/Varitone wiring that was a common option on the model at the time. It routes the pickups to different sides of a stereo cord allowing the use of two amplifiers, or more commonly two channels of the same amp. This creates a sort of Pseudo-stereo separation, or allows different tones or effects on each pickup. The Varitone is a six-position choke that was designed to help players (originally primarily country pickers) get a brighter, thinner sound out of Gibson's typically thick-toned humbucking pickups. While these features were later regarded as gimmicks and often removed, players at the time seemed to like them...the "SV" model outsold the mono throughout the '60s.

The brilliant cherry-red finish on this model was one of Gibson's signature looks in the 1960s. This guitar shipped out in 1963, one of only 97 Stereo 355s sold that year. Many of the features on this example are more typical of 1962, including a very slim neck back-to-front and the older vibrato. The Patent # pickups were being phased in at the time, so they are more typical of this year.

Although it has seen some wear and tear, this 355 remains a beautiful "genuine relic" and a very versatile player's instrument. While designed originally primarily with jazz and country players in mind, the ES-355 has long been considered one of the classic electric blues guitars, and virtually from its introduction was standard equipment for many of the seminal players in that genre, especially B.B. King. This one is ready to play "Everyday I Have The Blues" everyday, or pretty much anything else for that matter!

This guitar has seen some major play time over the last 57 years but remains a lovely original example. The electronics are still in the Stereo/Varitone configuration, with two-channel output requiring a dual-tip cord and the 6-position Varitone engaged and functional. Many of these guitars have been rewired to mono in the past, but this 355 is still playing as it left Kalamazoo. There has been some electronic work; some of the visible solder joints appear redone and it looks like the jack has been replaced (it is not gold-plated) and possibly the pot controlling the Varitone, although this part looks quite old. The pickups and pot rig is all original as far as we can see.

The finish shows some checking, slight fade in spots and small areas of flaking on the lower edges, likely from exposure to moisture. The cherry color is still quite strong and has that gleam that just says "Gibson" even across the room. The gold plating has some fairly significant wear, notably on the tailpiece and pickup covers. The Patent Number pickups are original; the covers have been off and on, but everything works as it should. All other hardware appears original; the only thing not present is the handle tip piece for the side-to-side trem system.

The guitar looks to have been refretted long ago, a good job with appropriate size wire. These have some light wear and crowning work but nothing that impedes play. There are shallow divots over a lot of the fingerboard...this one was played a lot! The back of the neck has some dings and dents and shows loss to the finish on both sides but maintains a smooth comfortable feel. This is a great sounding guitar, offering tones ranging from the smoothest jazz to a serious snarl when cranked. A "Real Relic" and a lovely example of the classic Gibson tradition, in its original yellow-lined black HSC. Very Good + Condition.
×