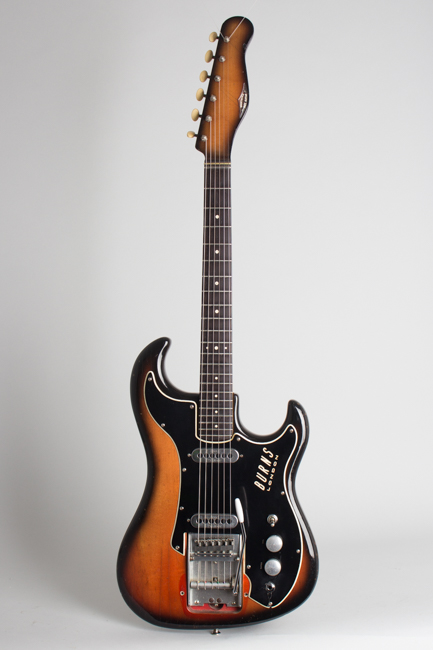 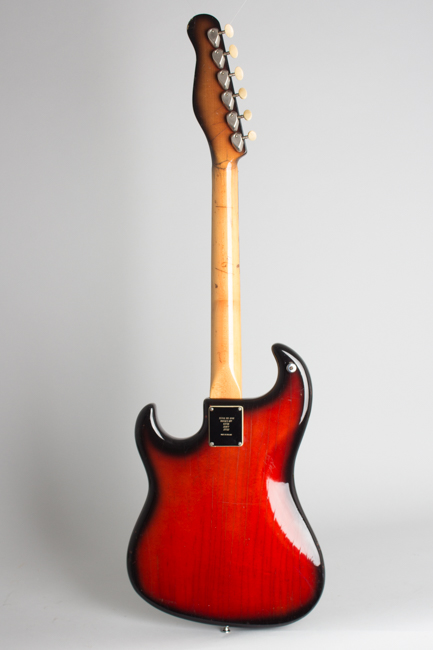 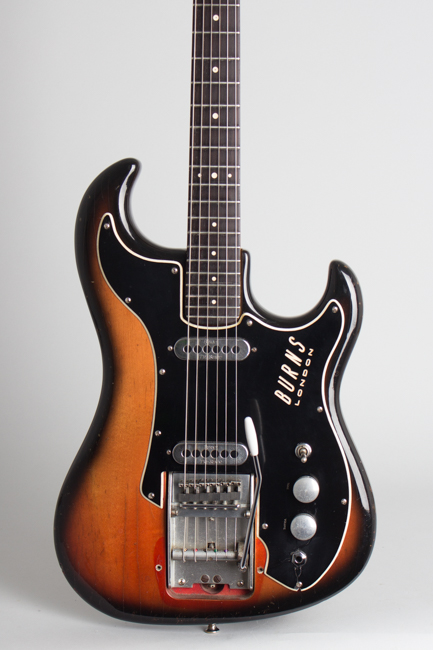 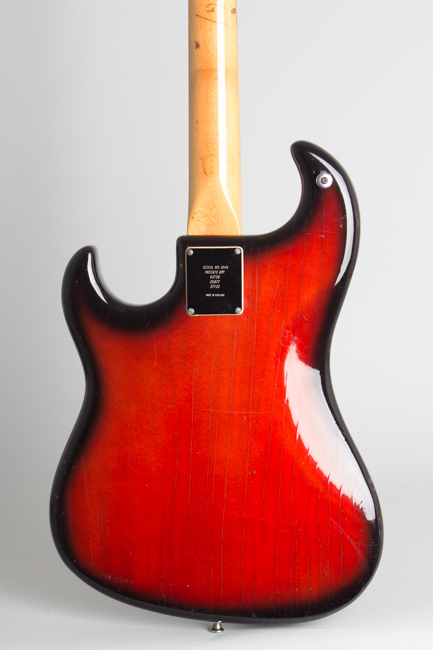 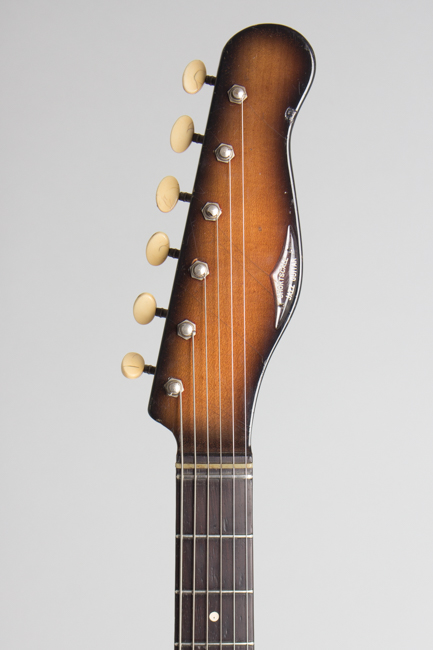 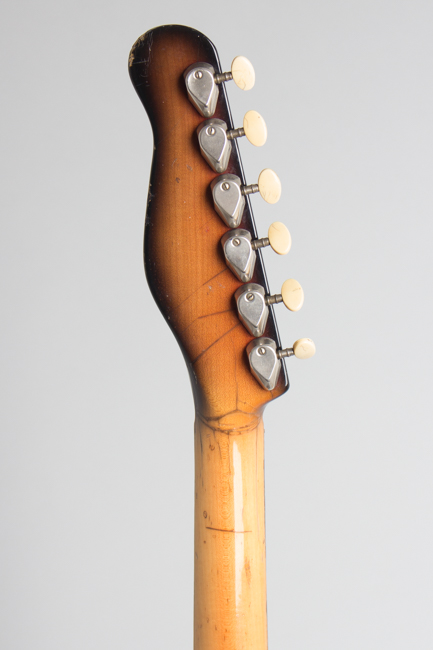 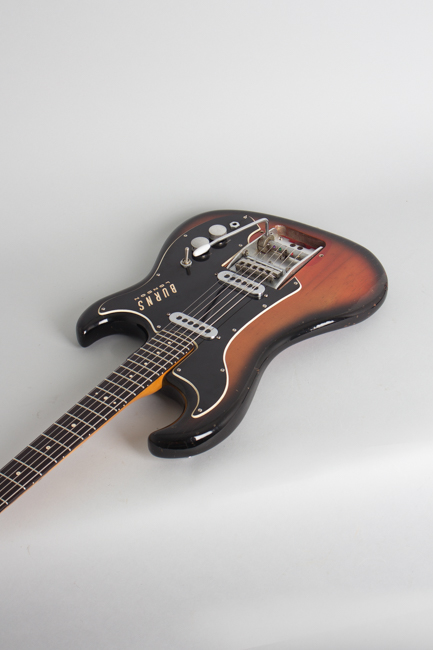 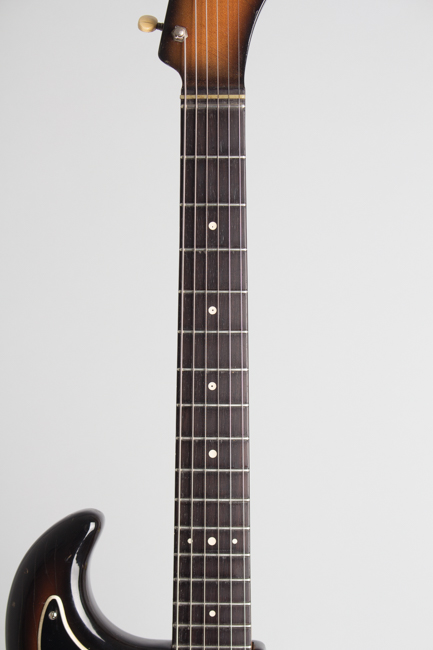 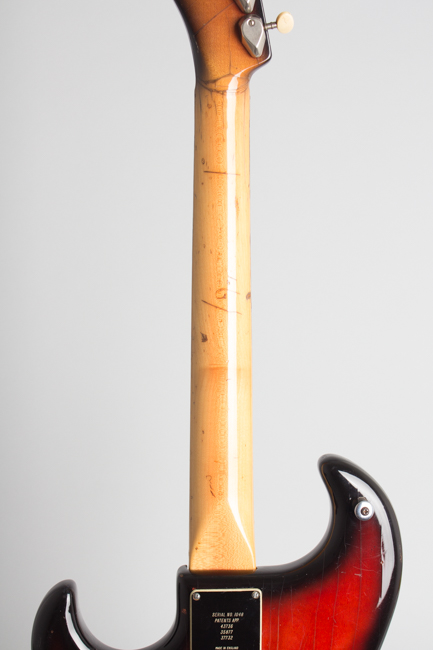 The 3-pickup Burns Jazz Split Sound Guitar is somewhat familiar to US players, sold here under both the Ampeg (1963-4) and Baldwin (after 1965) names. This "Shortscale Jazz Guitar" is a much rarer instrument. A simpler version of the same basic design, it was only issued under the Burns name beginning in mid-1962 and was discontinued by late 1964. Made in far smaller numbers, these were not imported here and are now almost never seen in the US. The "Jazz Guitar" was intended as a mid-price instrument; professional class but less expensive than the dramatically styled Black Bison and Hank Marvin guitars at the top of the line.

Obviously still owing a debt to Fender, this guitar is an interesting variation on the common "Split Sound" model. It has two of the plain-top Tri-sonic pickups (used only otherwise on the older "Sonic" model) with a conventional 3-way switch. Tone selection is more straightforward than the "Split Sound" version but less restrictive as well, as all possible 2-pickup combinations are accessible. The guitar is also equipped with the lavish Burns "Series II" vibrato system which incorporates a floating bridge cradle and individual adjustable saddles and must rate as one of the best systems of its kind.

The sunburst-finished 23 1/2 inch-scale neck is slim and comfortable with a shallower feel than a Fender. The "Shortscale" aspect was a Jim Burns fixation, intended to assist in reaching the "extended range" chord voicings popularized by the likes of Tal Farlow. The unusually long single-sided headstock is equipped with early style plastic-button enclosed Van Gent tuners.

A red-black finish was standard for this model; this example is moderately faded on the face to a more amber-y color. All the instruments from the Burns London period (1961-65) are extremely well-made, and this rates as a fine-playing guitar with tons of '60s character and a distinctive sound unlike even most other Burns instruments. A very rare and interesting guitar; well-worn but a good player still.

This is a well-used but very playable guitar and sounds great. The finish has dings, dents, and a decent amount of checking, typical of UK-made guitars. This is especially noticeable on the back of the neck where it is heavy enough to look like cracking to the wood, which it is not! There is a noticeable repair to the hard plastic pickguard around the jack, something fairly common on these models. This is solidly done but visible with a small chip missing at the rearmost screw. The pickguard screws and those holding on the neck heel cover are replacements.

Most of the other hardware is original including the pickups and electronics, bridge, and tuners. The tailpiece cover is missing and the vibrato arm is a generic Strat-style replacement, which does not have the correct period look but works fine. The guitar has been refretted nicely but shows a few scars on the fingerboard from previous work, not affecting play. This little Burns may be a bit scruffy 'round the edges but remains a really nice-playing guitar with a surprisingly powerful sound. Very Good + Condition.
×