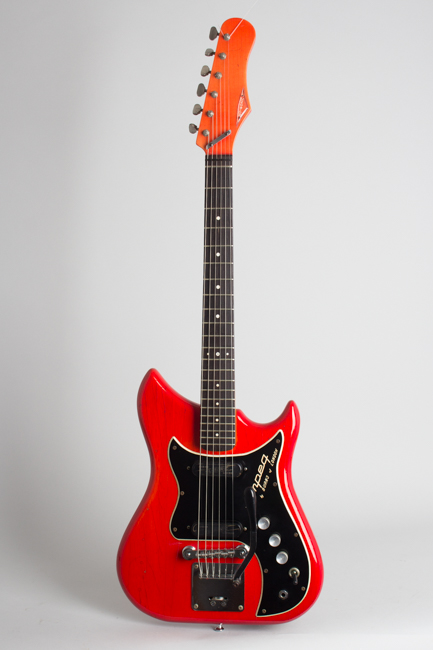 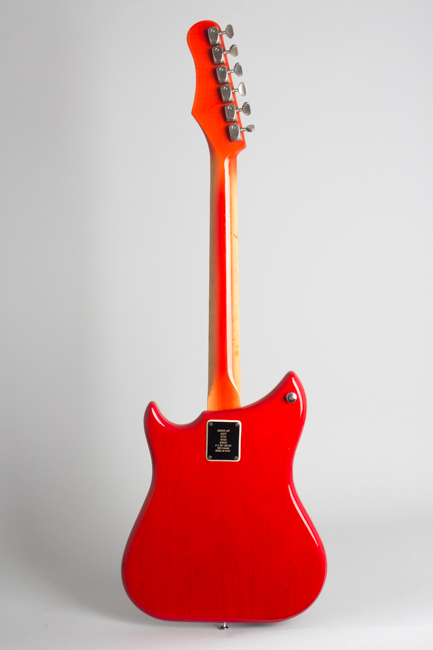 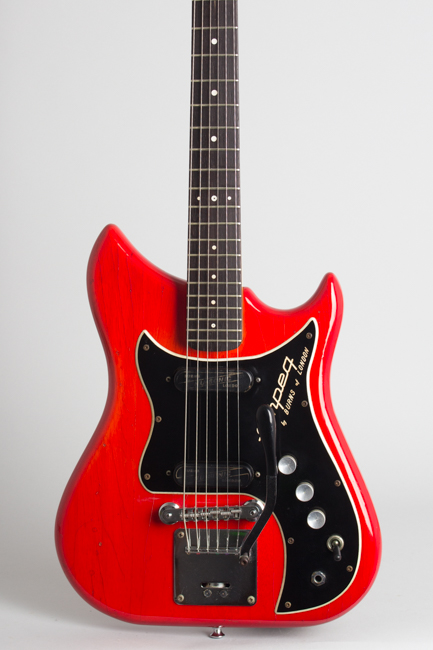 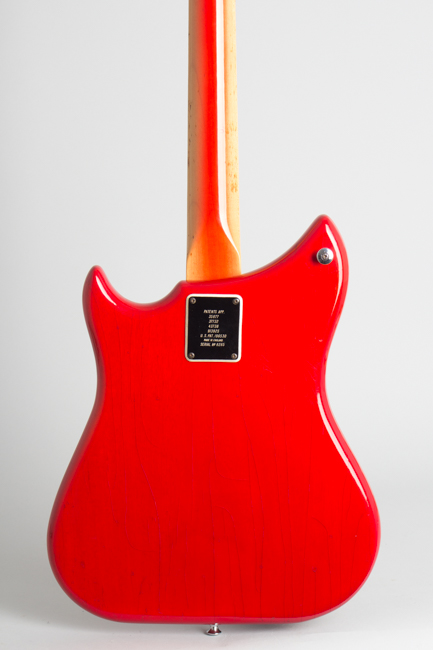 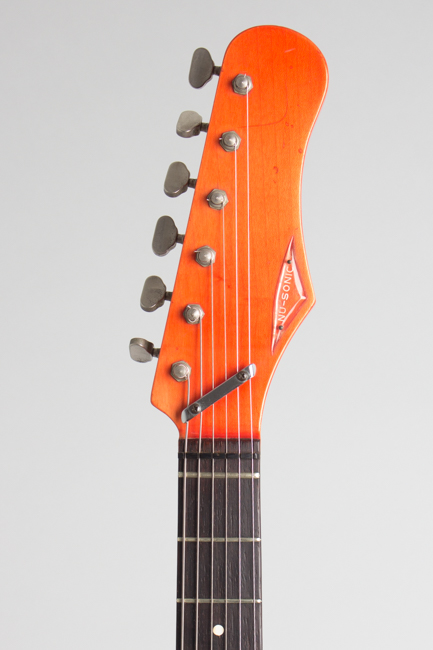 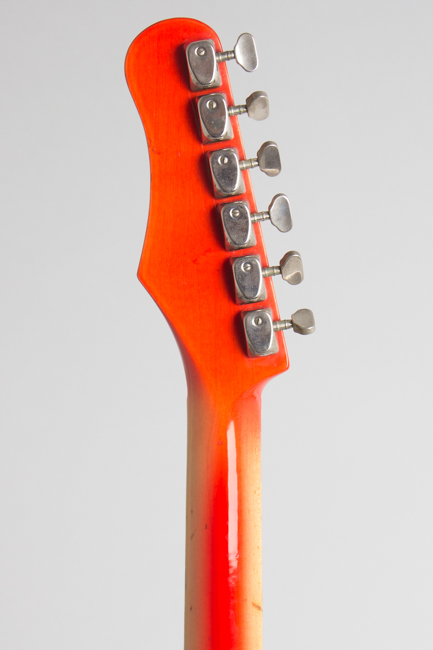 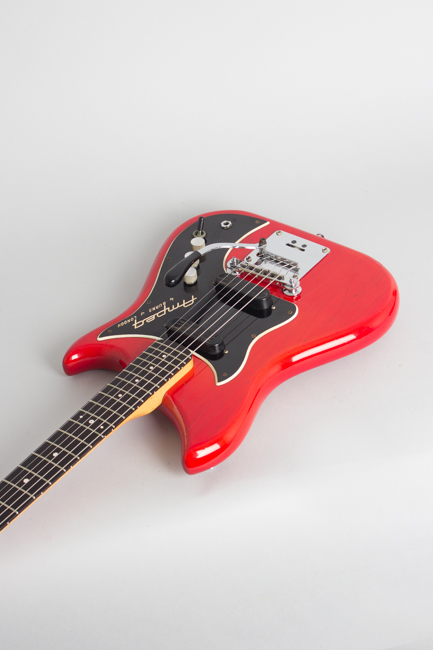 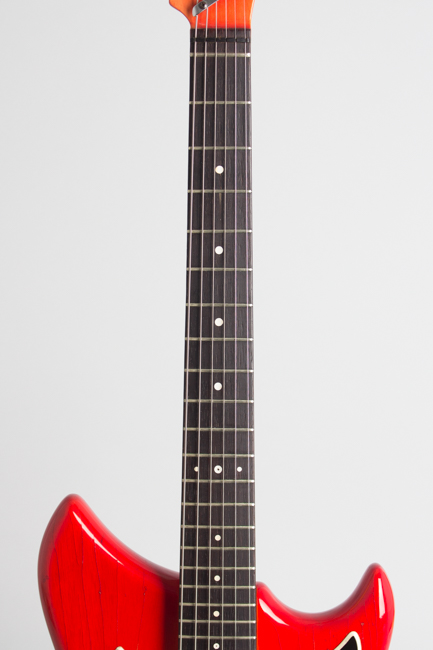 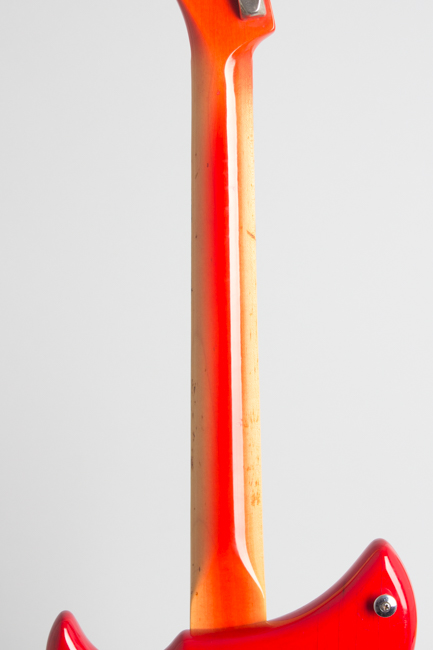 Here is one of the rarer instruments we have encountered from England's Burns company -- an Ampeg-logo "Sonic Six" guitar; the American-distributed version of the Burns "Nu-Sonic". In the early '60s Ampeg was looking for an electric guitar line to complement their popular amplifiers and imported a rather limited line of re-branded Burns of London instruments. These were high quality, unique guitars but the price in the US after transport and import duties were figured in proved to be extremely high -- a major flaw in the plan!

The initial 1963 Ampeg line consisted of two models, the "Wild Dog" guitar and a matching "Wild Dog Bass". These were brought over in very small numbers, as they are both exceedingly rare today with only a few examples documented. In the crowded US market the instruments went little noticed. The line was expanded in 1963 to include what became their only decent seller: the less expensive, short scale "Jazz Split Sound" guitar, which was imported into the US in small but steady quantities up through the beginning of 1965. These are the only Ampeg model generally seen today. The Nu-Sonic was cataloged by Ampeg as the "Sonic Six" in later 1964, but only one batch of them seems to have been brought over to the US before the deal ended in early 1965.

The handy and frankly rather cute Nu-Sonic guitar was introduced in mid-1964 as Burns of London's student-level instrument, replacing the original 1960 Sonic series. The model was offered as both a guitar and a bass, listed in cherry or black finish at around half the price of a flashy Bison or Marvin guitar, making it roughly the UK equivalent of the Fender Mustang. The great majority of Nu-Sonics that turn up are in this transparent cherry livery -- all Ampeg-logo'd guitars seem to be in this finish.

Despite its lower-budget intentions, the Nu-Sonic is a very well-made guitar and was not particularly cheap by contemporary standards. Perhaps in light of this, it was one of the first models to be dropped by Baldwin after they bought the Burns company in September 1965. As the Nu-Sonics were discontinued by the fall of 1966, the total production run was very brief at only about two years. Ampeg examples like this are even rarer, as very few were actually imported under that brand.

Like all Ampeg examples, this particular guitar was built in late 1964. It is fitted out with two single-coil Nu-Sonic Pickups under engraved plastic covers, a 3-way switch, and volume and tone controls. The vibrato is simple but effective, and despite its student origins the Nu-Sonic makes for a good-sounding and surprisingly versatile package. The Nu-Sonic is a very light and comfortable guitar, its handiness belying it with a snarly tone. This Ampeg-logo example is a cool Burns rarity and neat little player's guitar.

Overall this Nu-Sonic remains in very nice playing condition, and nearly all original. The finish shows typical checking and numerous small dings and dents, but no flaking or major loss. The hardware is original and complete except for the adjustable bridge, which is a Burns-made piece but not usually seen on this model -- the Nu-Sonic usually has a simple floating bar bridge. Even if not exactly correct, the unit currently mounted is more functional, allowing individual string adjustments where the standard piece does not.

The guitar is not modified at all. The elusive trem arm is present and everything works as intended. The frets have some light wear but the guitar plays excellently, with a more powerful sound than one might expect from such a light and handy solid-body. Excellent - Condition.
×