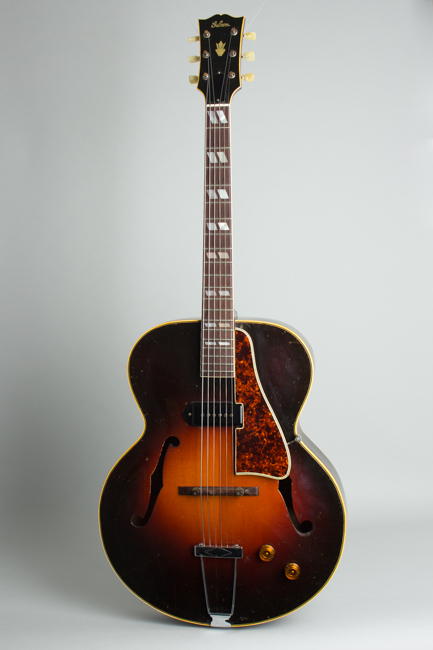 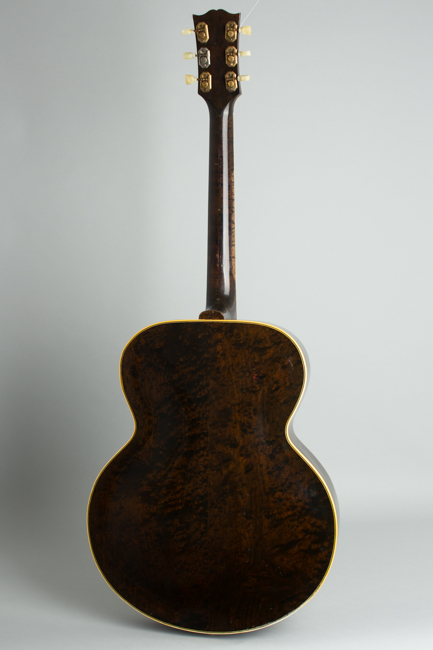 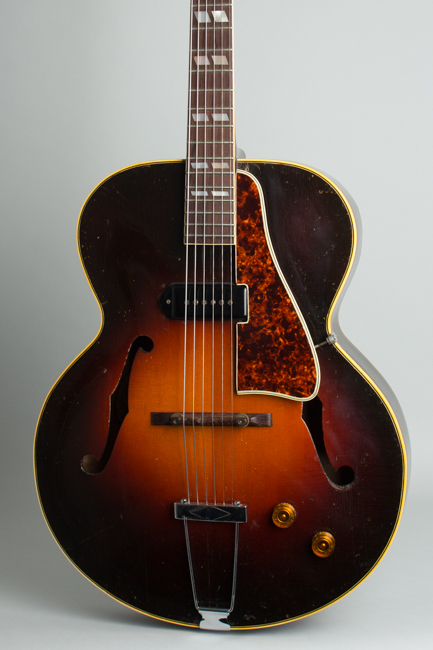 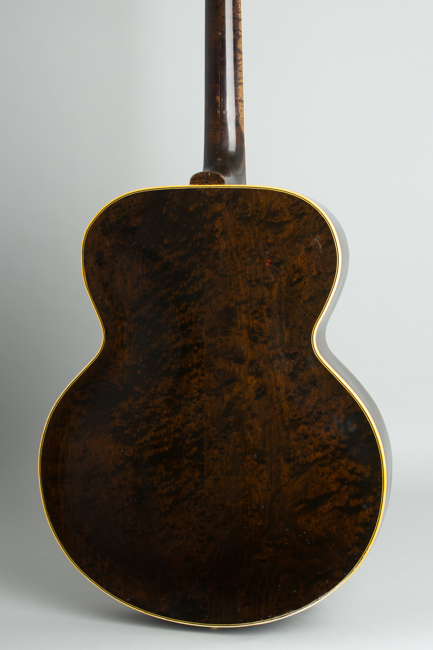 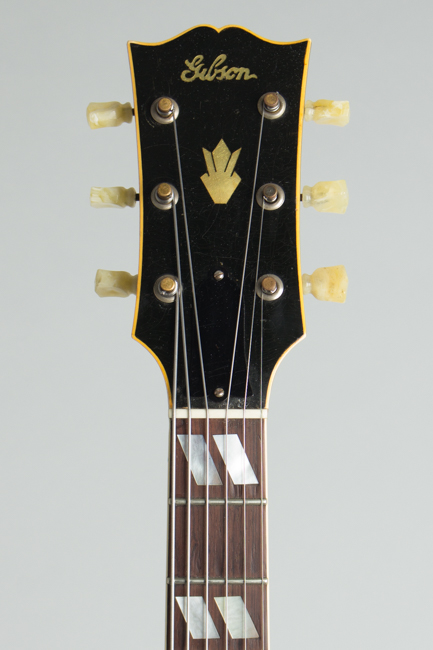 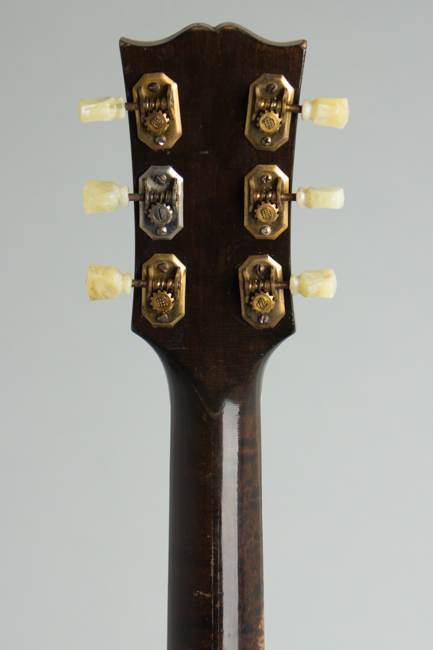 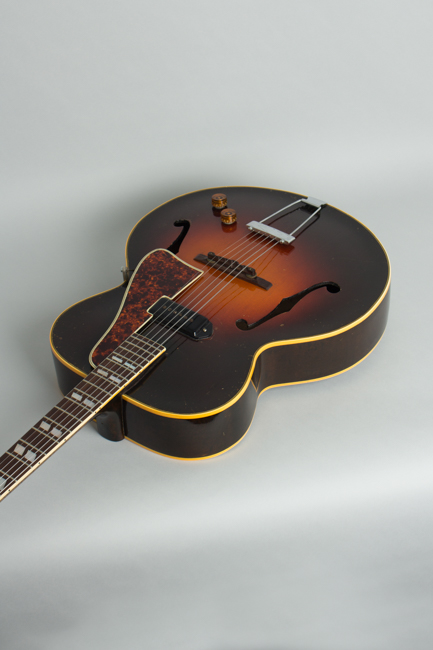 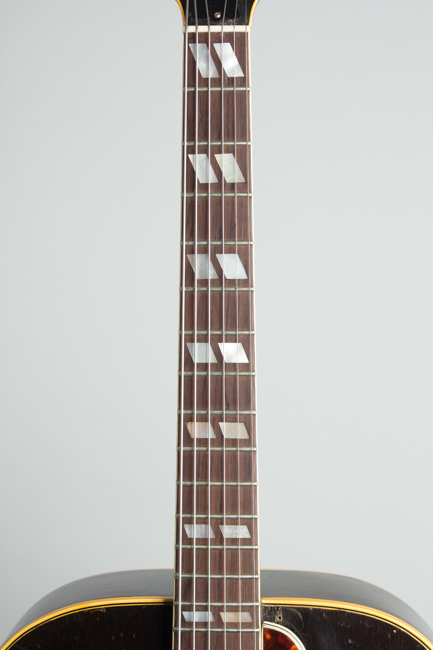 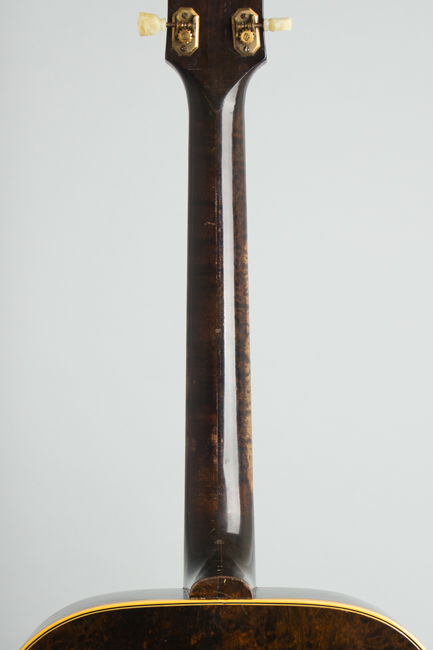 Here is a real veteran guitar, a veteran of WWII and the late swing era adapted to the new sounds that followed. This lovely L-7 was made before the end of WWII as an acoustic guitar, and looks to have been electrified not too long after. It carries a single Gibson P-90 pickup with a tone and volume control added in the typical places. Many archtop acoustics were similarly "updated" in this period as music in general became more amplified into the 1950s. This guitar is most similar to an early postwar ES-300, though its carved top and back give it a sonic edge acoustically at least.

This L-7 is interesting in itself; wartime-built archtops are quite rare, but both the older series serial number on the pre-war style white label and the internal Factory Order Number can both be dated to 1944. The L-7 was the only carved top instrument officially available during the latter part of WWII but there are no production records available; they are fairly rare. The guitar has some transitional features typical of the period. The headstock logo is still the pre-war Gibson script; the tuners are gold-plated wartime riveted gear Kluson individual units with keystone plastic buttons (one is mismatched and slightly later). The three-piece maple neck is equipped with a truss rod but has substantial chunky round-backed profile typical of many wartime guitars.

The top and back have heavy triple-binding; the fingerboard and headstock are single-bound. The back is made of lovely burl maple that would have been suitable for an L-5, obscured here by the dark finish typical of an L-7. The top has a very red-orange hued sunburst, not a typical Gibson archtop look but definitely original to the guitar. When the early P-90 pickup and wiring rig were added is unsure; the pickup itself looks to date to the later 1940s or early '50s, but the wiring rig components are newer.

Despite its checkered past, this now-electric L-7 is a very good player with a great vintage vibe. Acoustically it still rings with a nice chunky midrange sound, but really comes into its own played amplified, sweet while having an edge when pushed.

Overall this guitar shows a some general wear and the obvious modifications, but is still a great player that has a serious vibe! The pickup installation was more carefully done than many we have seen; the top was routed to mount the coil, but the braces were not cut through and the top remains completely stable. Small wing pieces were added outside the braces as additional reinforcement for the pickup mounting screws to engage. Further holes were drilled for the controls and jack, all fairly neatly done. The finish remains original with some small areas touched up but without any large areas of overspray.

The top shows some small, somewhat sloppy patching spots around the pickup; it looks like a humbucker may have been installed at one point and then the P-90 later put back in. Overall the finish shows dings, dents, and scrapes, but not much heavier wear. The top center seam has been resealed, and there is one very tight grain crack above this running from the back edge. There is a repair of the back/side seam above the tailpiece that is solidly done but not as neat as it might have been, and a couple of tiny old side cracks. There is a small hole in the heel where a strap button could be mounted if desired.

The hardware is a mix of periods, but nothing is glaringly inappropriate. The pickguard is not original but looks to have been handmade some time ago; the tortoise celluloid is brighter than Gibson used, but the design and styling are consistent with the guitar and period. The original rosewood bridge is still fitted with the underside of the saddle cut down somewhat. The tailpiece is a later '60s-style Gibson replacement. The knobs are good repros of the correct Gibson type for the early '50s.

The fingerboard has been trued and refretted cleanly with wire substantially larger than the original, but it plays very well. There is a small check in the back of the headstock/neck joint that is sealed but not finished over. Overall a really cool player's instrument; great-sounding both acoustically and electrically. It is very redolent of that immediate postwar vibe, with its mix of hot swing, incipient cool jazz, and the newly amplified R&B and Country sounds. It still resides in a typical wartime hard case we would assume to be original. Excellent - Condition.
×