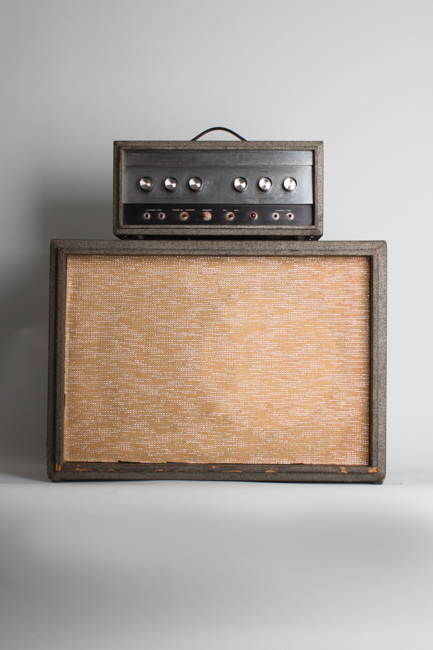 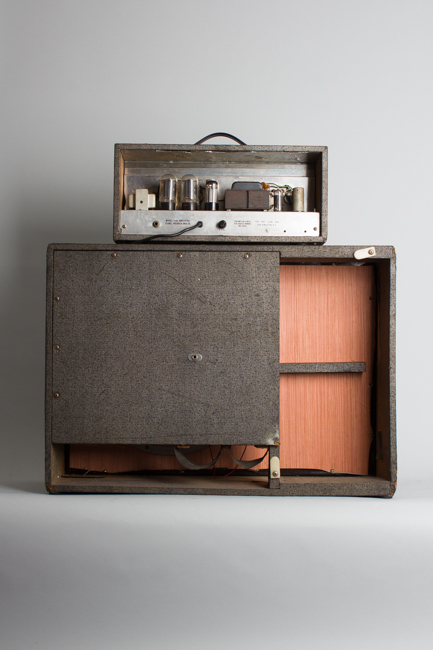 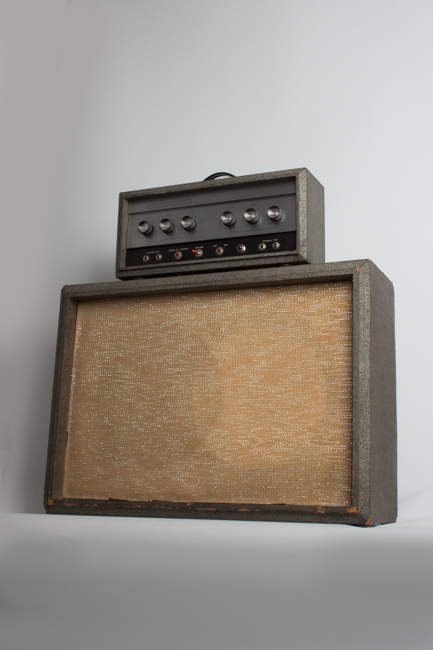 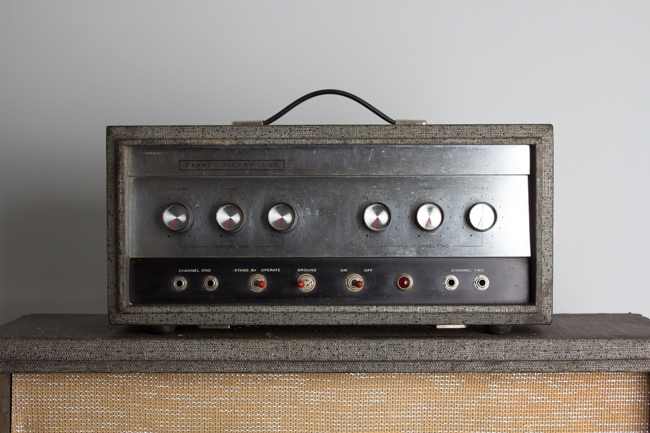 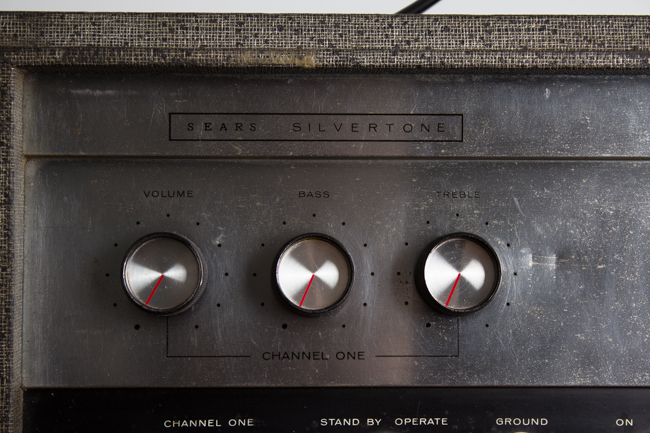 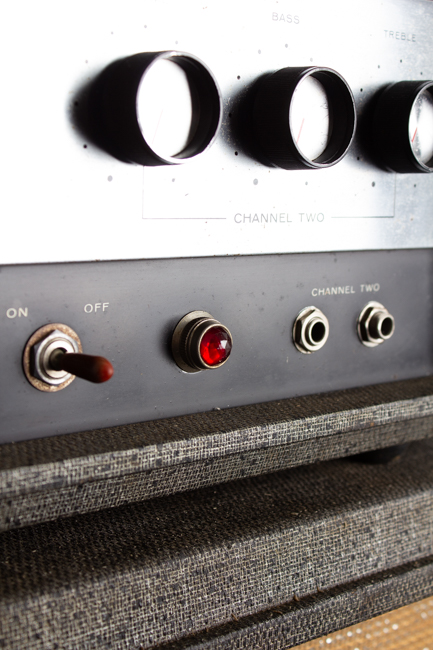 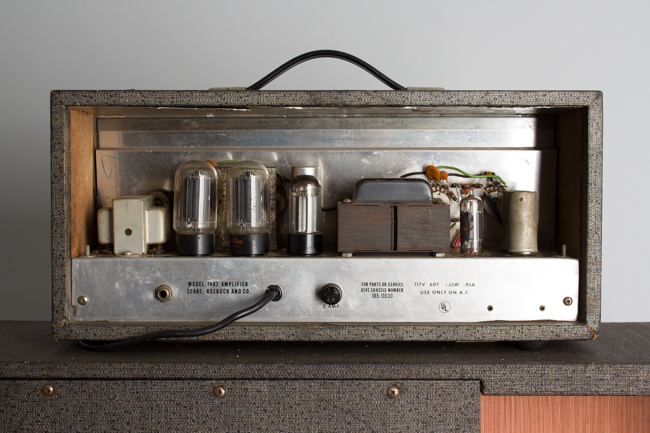 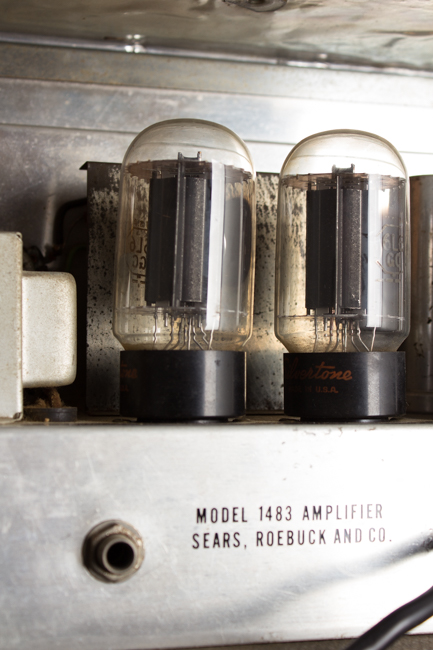 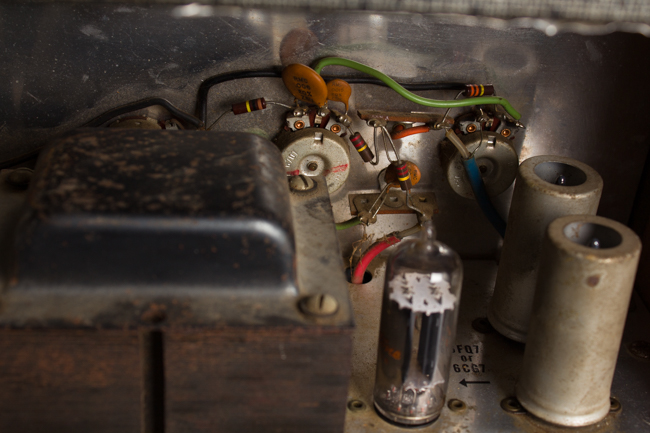 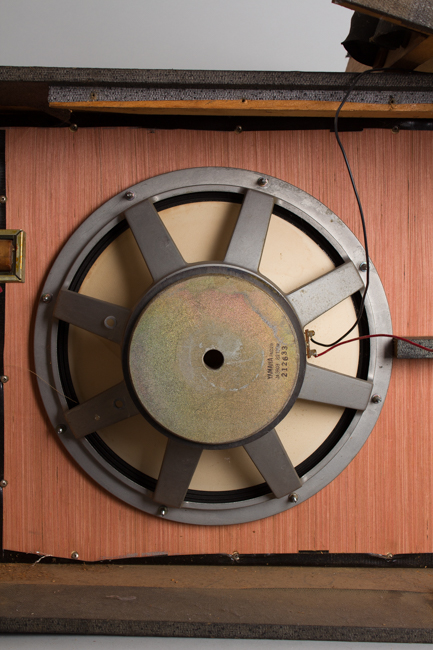 In the 1960s, Sears Roebuck & Co. contracted Danelectro to provide many instruments sold under the Silvertone brand, including the 1480 series of amplifiers. The Model 1483 was initially designed and marketed as a bass amplifier (primarily to pair with the infamously beloved "Dolphin nose" Silvertone/Danelectro bass). As such these were made and sold in relatively small numbers compared to other models like the more common (and equally beloved) 1484 Twin Twelve.

Although similar in size and appearance to the Twin Twelve, the 1483 is a fairly different animal in several ways. it features a single 12" speaker as well as a 5Y3 tube rectifier, giving it more sag and a softer attack, much like a Fender. The two 6L6 power tubes yield around 20-25 watts of power. These 'piggy back' style amps were cleverly designed to be able to stow the head safely in the back of the speaker cabinet for transportation with two little levers to lock the head in place. These amps are known for their great tube drive all the way to higher gain crunch and for helping to shape the sound of the 1960s. This still makes a good lower volume bass amp but really shines as a guitar set.

This amp is a bit scruffy overall but still great-sounding. The pots date to the end of 1966 and beginning of 1967, so it was likely assembled in Neptune and sold by Sears just before the summer of love. It shows some wear but IS better preserved than many of these. As you may imagine, These Sears amps were mostly used by amateurs, especially young garage bands and not exactly subject to exemplary care; the bigger amps were often gigged to the ground.

The rather fragile covering is still mostly intact showing moderate scuffing and wear, particularly around the lower corners and edges of the cabinet. The baffle appears to have been replaced at some point and re-clothed with the original grille cloth. It was put on reverse side, showing a very subtle darkening of the speaker circumference opposite of the speaker placement. The head is in great shape with the front panel very well-preserved with minimal-to-moderate wear and virtually all the stenciled lettering remains intact. All the original knobs and switch tips are present as well.

Electrically, the amp is nicely original. The speaker is a Yamaha JA 3803 speaker with its original cone still intact and sounds fantastic. The transformers and pots appear original to the amp and it has received our typical maintenance and servicing, including replacement of all electrolytic caps, cleaning of all sockets, pots and jacks, a new 3-prong grounded power cord and biased to spec. Overall this is a decently well-preserved and very functional example of a fantastic sounding amp, sought after by many for its unique tone and monstrous breakup. Very Good + Condition.
×