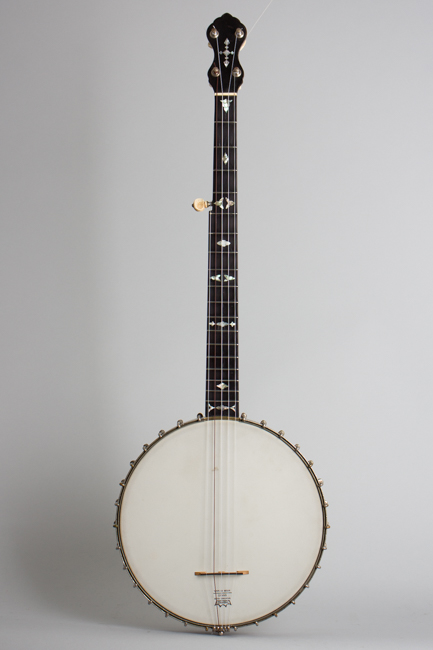 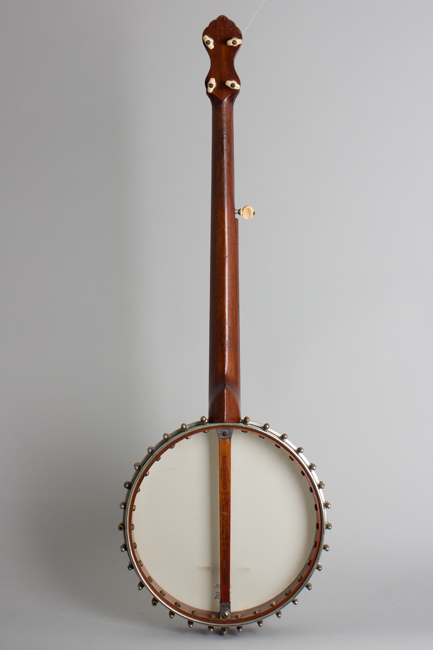 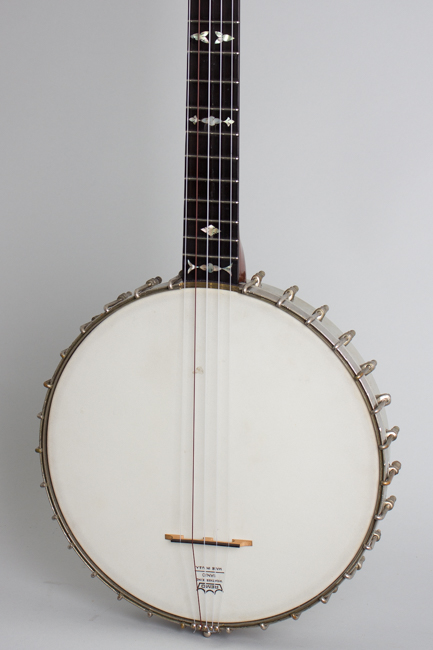 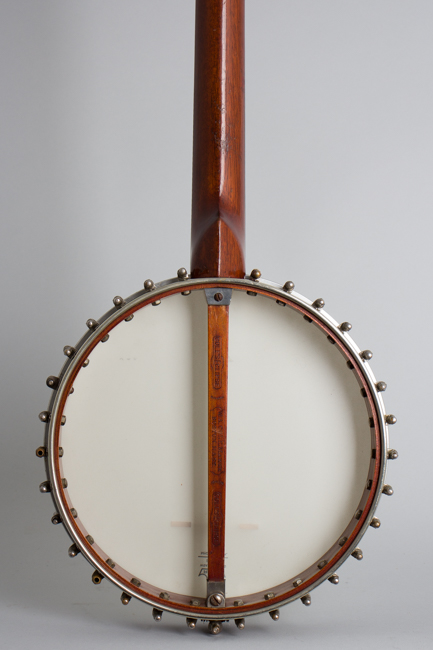 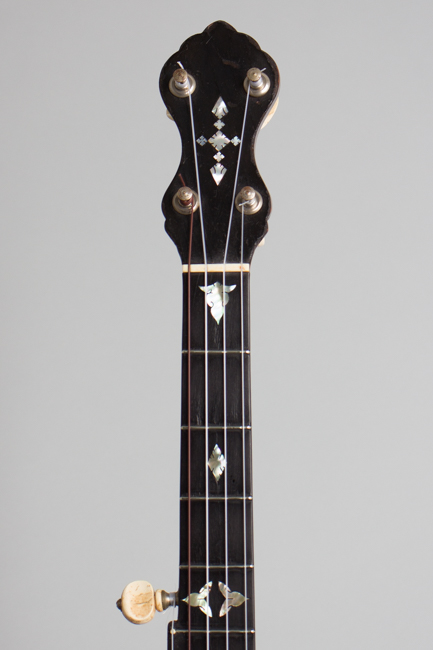 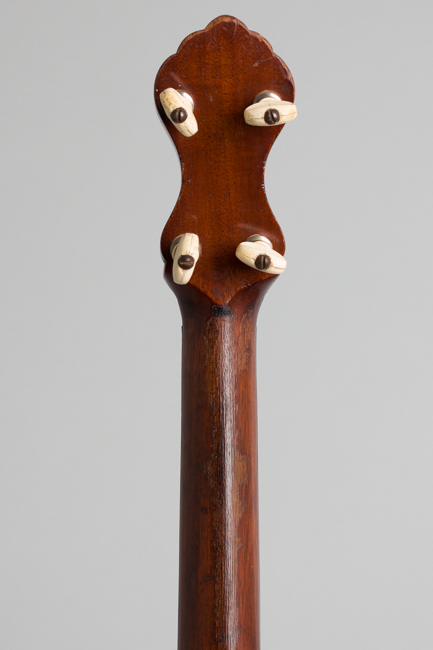 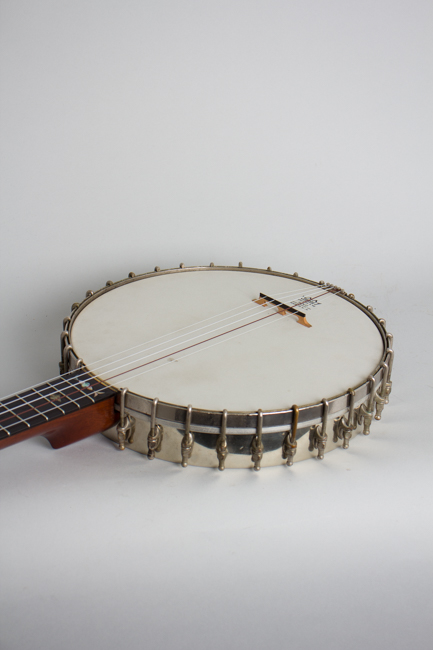 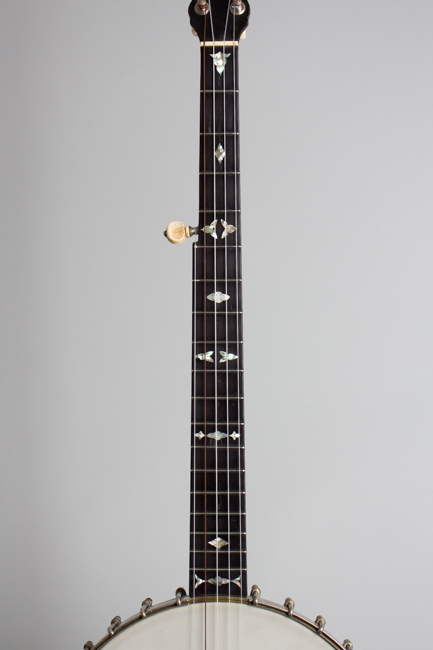 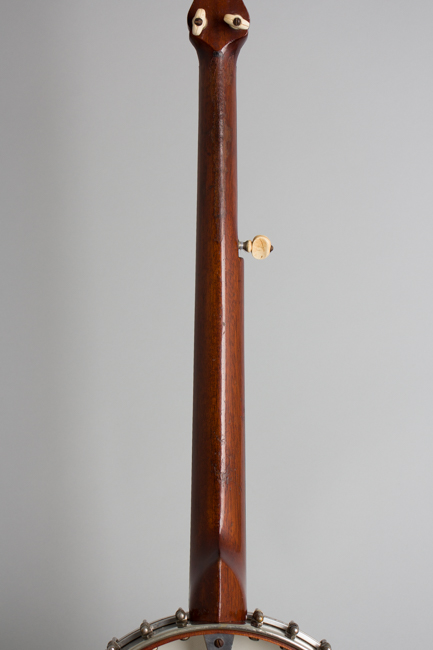 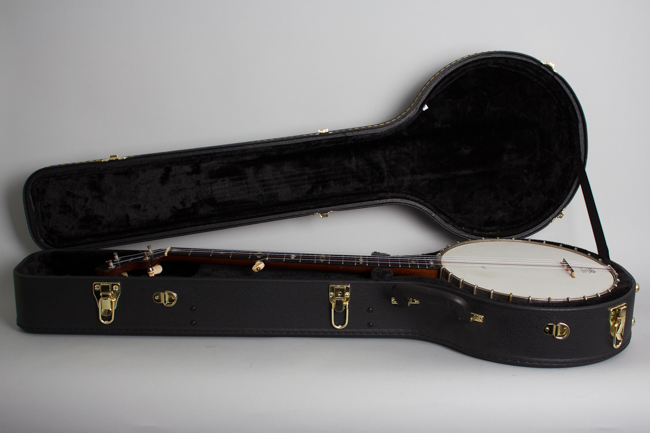 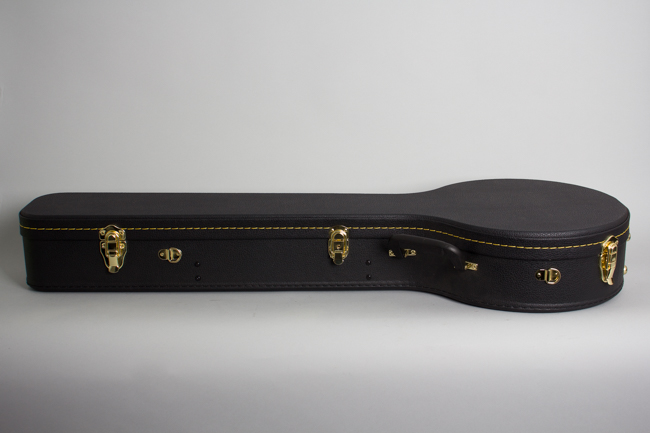 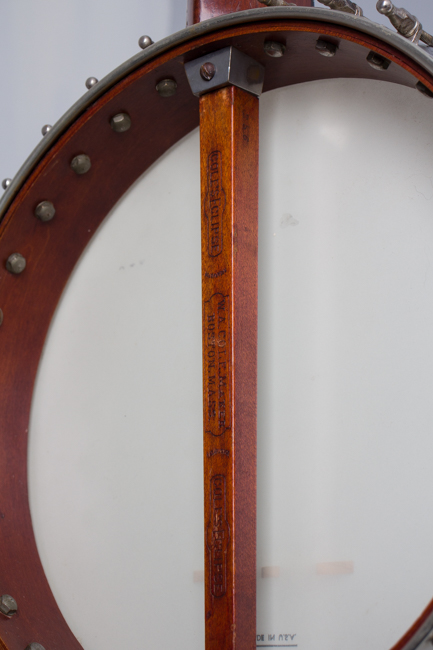 This is an interesting very early original example of a Cole's Eclipse banjo, a line most remembered for the iconic Model 3000 with the man-in-the-moon headstock inlay but actually comprising several different models. When W.A. Cole split from the Fairbanks & Cole company in 1890, he immediately launched his own banjo making operation across the street from his old partner! The instruments created there rank among the most interesting and artistic banjos of the classic five-string era. The various Cole's Eclipse models are generally considered to be among the finest 5-string open back banjos ever made, rivaling ex-partner Fairbanks' instruments in beauty and craftsmanship if not always in sound. They have a number of distinctive and unusual design and construction features and are always beautifully made.

This very early model has a low 3-digit serial number ranking in the first few hundred, but already built with many of the familiar construction features that define this line into the early 1900s. The most unusual is a late 19th century standard (though heavier than some) spunover rim instead of the black-varnished laminated wood style associated with most Eclipse models. It does have the teardrop shaped shoes used on more familiar Eclipses, mated to hooks with quirky 4-sided closed nuts that (inconveniently) no modern banjo wrench will fit. The unique "Boat Heel" mahogany neck and dowel are secured by the panted Cole's neck adjustor system. The dowel itself is similar to later models, marked "Cole's Eclipse" "W.A.Cole Maker Boston Mass" but with a tiny "Pat. App'd For" stamp instead of the later patent number.

The headstock inlay is a delicate pearl diamond motif, similar to some earlier Fairbanks & Cole patterns. The ebony fingerboard has varied shaped pearl pieces along its length. The tailpiece is correct period (probably original) Elite; the Champion style friction tuners are period at least if not original. This delightful and very playable historic banjo is set up with an older plastic head and Nylgut strings, a lovely and fine sounding early example of the artistry one of the late 19th century's most elegant and distinctive builders.

This is a relatively clean and surprisingly original 130 year old banjo, showing some general wear but no major alterations. There typical wear to the neck finish with dings, dents and rubbed away spots and some tarnish and minor denting to the rim plating, but really for 13 decades along this banjo is doing pretty well! The headstock facing has some typical veneer cracking seen on these old dyed wood pieces, but has lost only a few small flakes and chips. The fingerboard has a few old filled cracks to the ebony, all of the lovely inlay is intact.

Most of the hardware is original; the hoop was notched at the neck long ago to improve fingerboard clearance, probably when a plastic head was fitted. Most of the hooks and nuts are original, but four of them (mounted discreetly on the bottom of the rim) are not. This banjo is set up with NylGut strings, a Remo frosted plastic head and later (but still old) bridge. It rings with a lively if very old-timey sound. Fully functional and ready to gig, this "old Cole" resides in a good quality recent HSC. Overall Very Good + Condition.
×