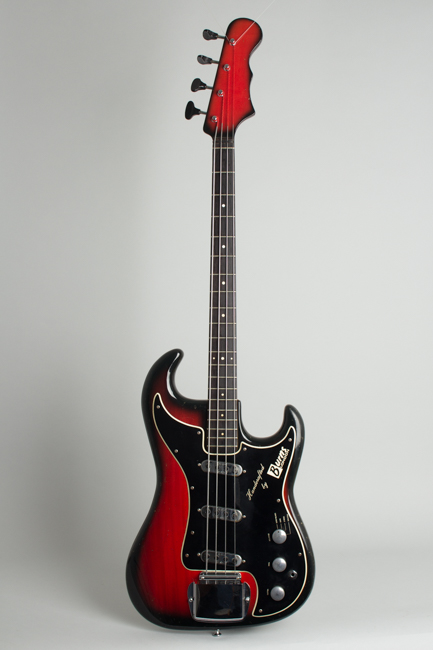 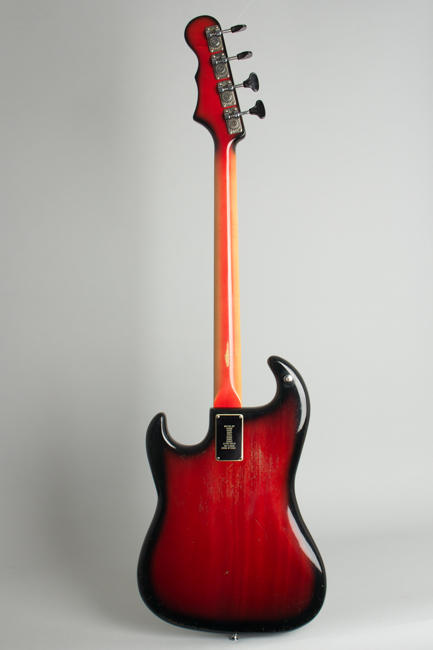 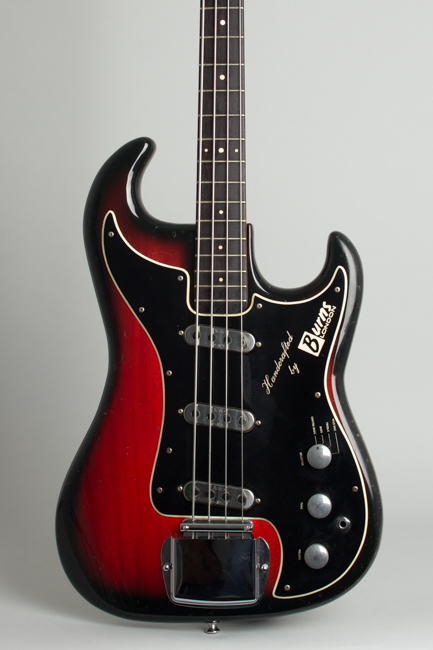 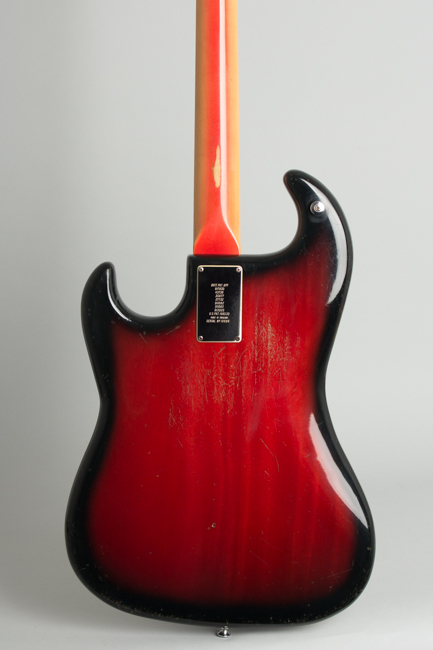 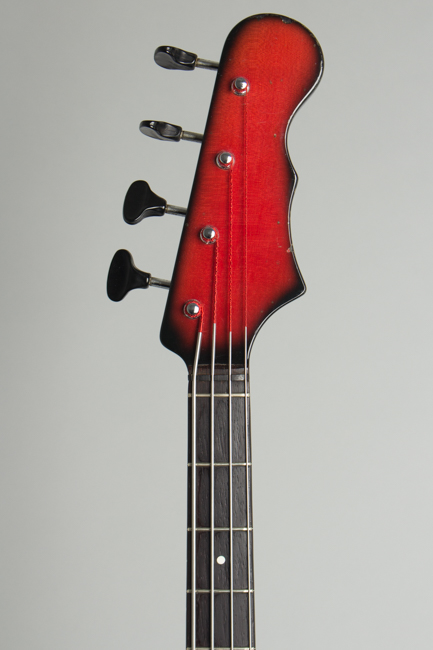 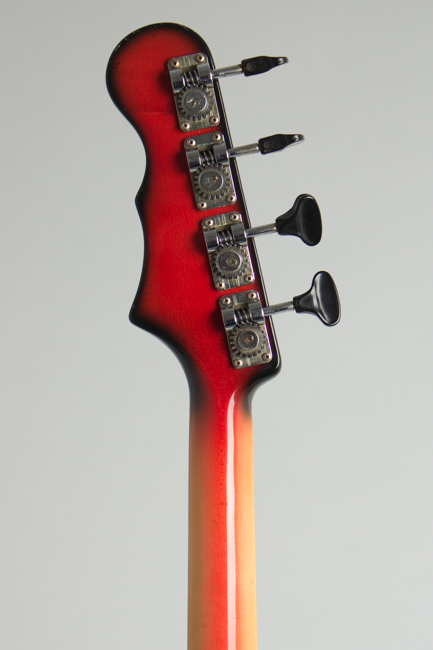 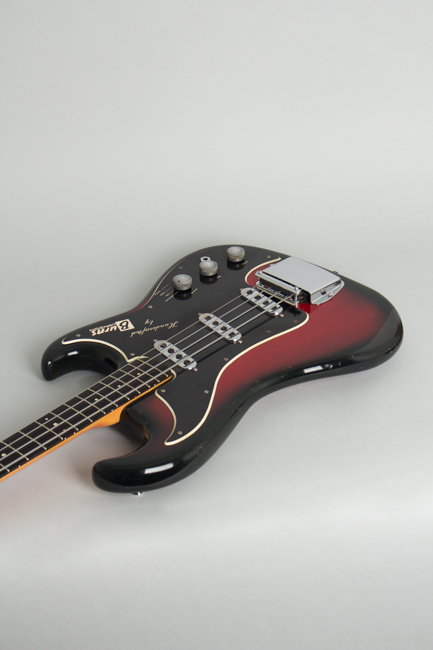 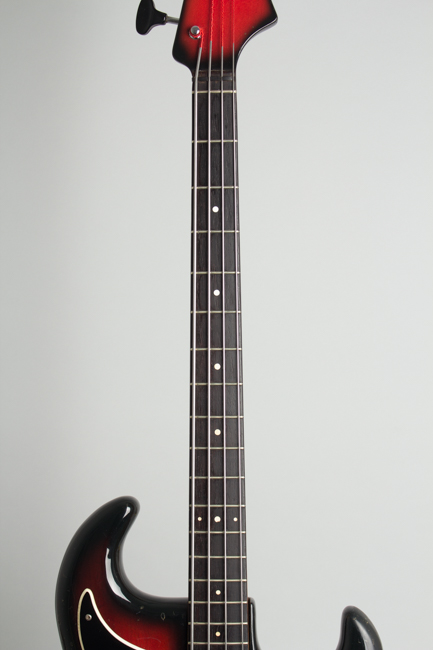 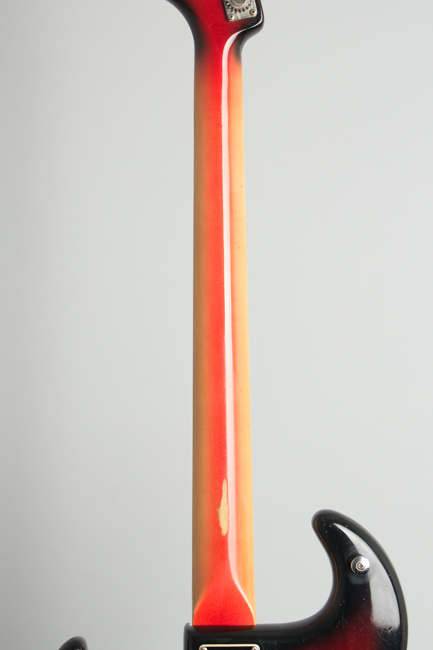 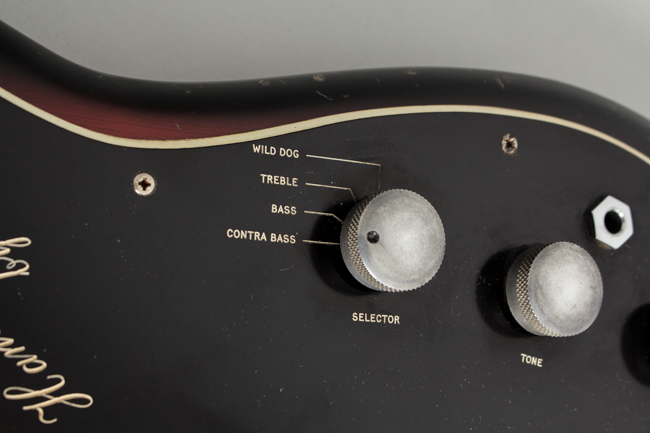 The Burns "Jazz Bass" (a name used without apparent concern for prior art from Fender) was designed as a mate for the company's most popular 1960s guitar design -- the Strat-like Jazz Split Sound model. This model was a later addition to the original 1960s Burns London line with production starting in the summer of 1964. Despite its relative rarity this is an unsung Beat-Group classic and a very stylish, great-sounding bass guitar with some original touches.

The Jazz Bass was Burns' mid-price 4-string instrument; professional class, but less expensive than the more dramatically-styled Bison and Shadows basses at the top of the line. It replaced the earlier 1962-4 Vista-Sonic Bass which had the same neck, electronics, and fittings on a much less Fender-ish body. The scooped-horn body design of the Jazz Bass replaced the earlier rounded lump-cutaway style with the shape of the recently introduced Double Six 12-string. It also substituted a much lighter African mahogany for the very dense English sycamore used previously, resulting in a considerably lighter and handier instrument.

The Jazz Bass sports three of the diminutive but powerful Burns Tri-sonic pickups hooked up to a rotary control giving four preset tone selections labeled Contra Bass, Bass, Treble, and the snarlingly out-of-phase "Wild Dog", which is of perhaps dubious utility on a bass but entertaining anyway! The elaborate bridge has four individual saddles adjustable for height, intonation, and spacing, and must rate as one of the best such units of the era. An adjustable mute bar is mounted directly in front and a chrome cover above the bridge.

The sunburst-finished neck has an unusual 31 1/2 inch-scale, halfway between the typical 34" Fender and 30" Gibson lengths. The neck itself is slim and comfortable with a slightly less round feel than a Fender. The medium scale gives a very fast feel, but retains a more percussive edge than the standard 1960s 30" short scale. The very large sunburst single sided headstock -- later changed by Baldwin to a smaller natural finish double-sided design -- is equipped with large plastic-button VanGent tuning machines. The red-black sunburst finish was standard for this model, and exceptions are nearly unknown.

All the instruments from the Burns London period (1961-65) are interesting designs, quite well-made, and this rates as a fine-playing bass guitar with tons of character and a very distinctive sound. It was most memorably used by Troggs' bassist Pete Staples both live and on record at the height of their career. This model was continued by Baldwin but after mid-1966 mutated into a more conventional 30" scale instrument, losing much of its unique character in the process.

While no 1960s Burns instrument is common, this model is a considerable rarity particularly on these shores. Burns instruments were sold worldwide under the company's name, but very few made it to the US due to the English firm's lack of a distributor in this market. This "true Burns" example -- dated internally to spring 1965 -- is one of the coolest unsung basses of the 1960s, "Handcrafted By BURNS London" in only small numbers. Despite its pirated name the Burns Jazz bass is a favorite around here and a cool 4-string connoisseur's delight!

This is a very nice example of this rare bass with some wear but no repairs or alterations. Overall the instrument shows small dings, dents, and scratches; there is some belt buckle wear to the back into but not fully through the finish. There is a worn spot from play into the pickguard below the strings; this has been touched up a bit so is not overly conspicuous.

The back of the neck has a scrape behind the 10th-12th fret area, but there is not a lot of wear otherwise. The frets have some light wear. The clear plastic "Jazz Bass" name plate is missing from the headstock; otherwise, the instrument is complete. Even the oft-missing bridge cover and mute bar are intact. We have it set up with the mute working, but it is easily removable if (like most modern players) you don't want to use it. This is an excellent-playing bass; light, easy handling, with a distinctively aggressive sound. Includes a period but not Burns-issue hard case. Overall Excellent - Condition.
×