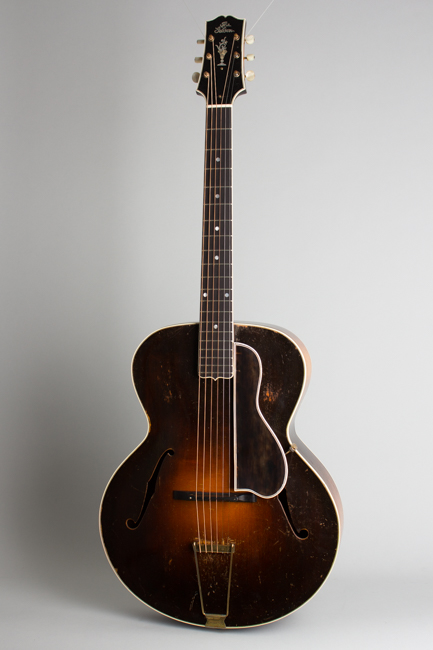 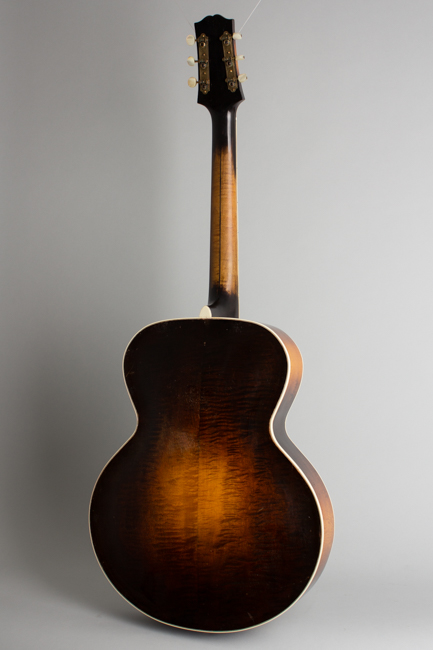 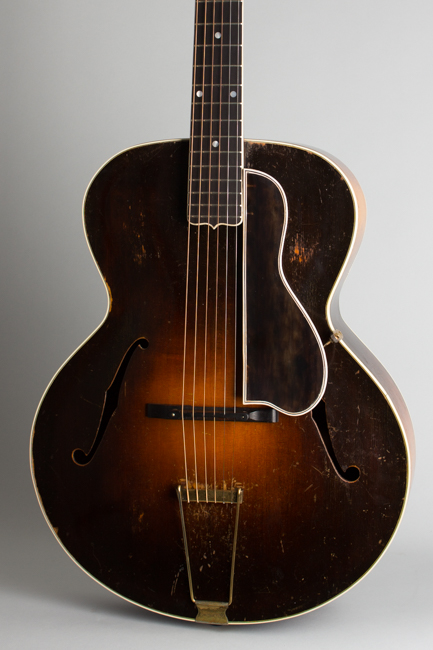 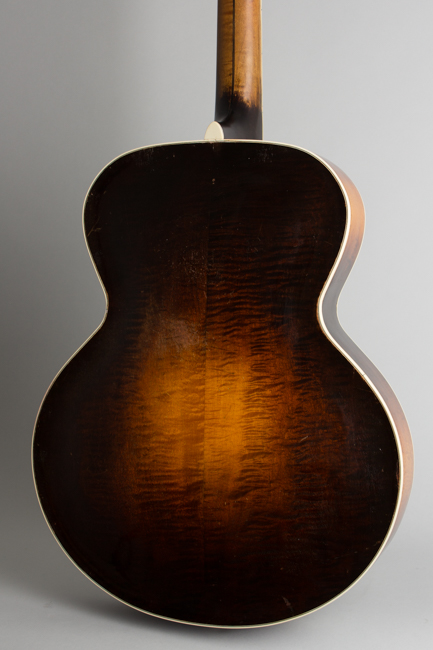 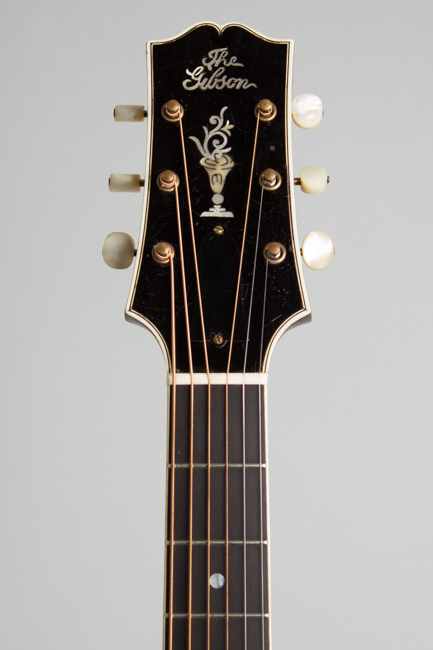 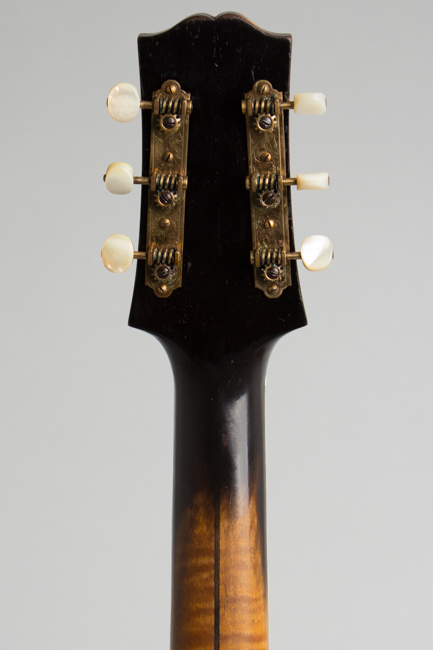 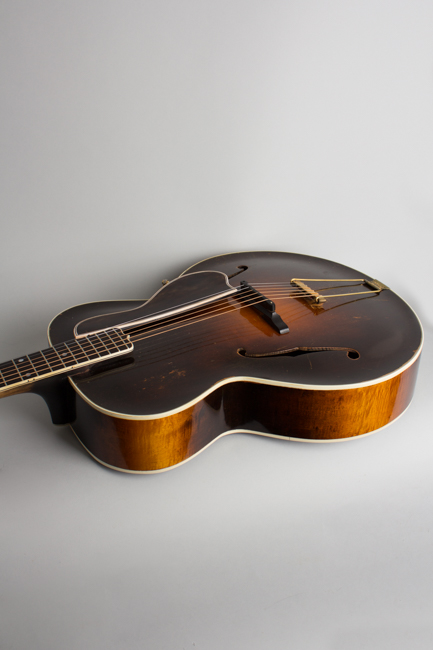 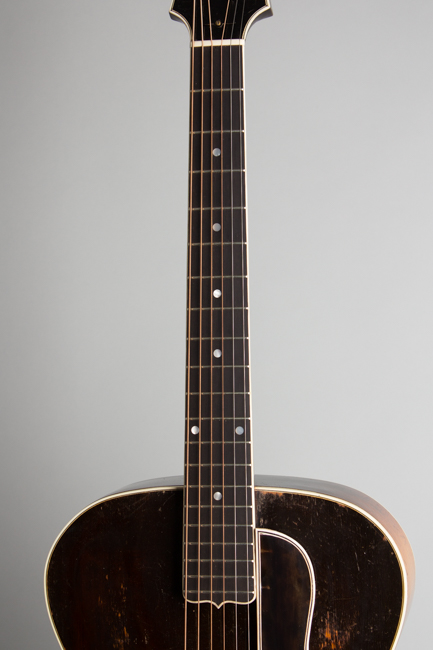 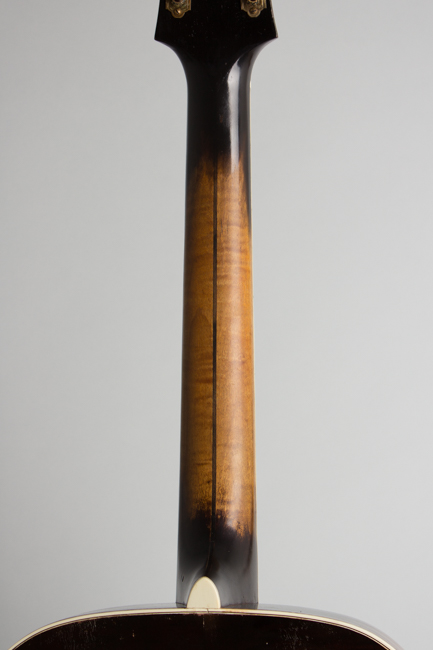 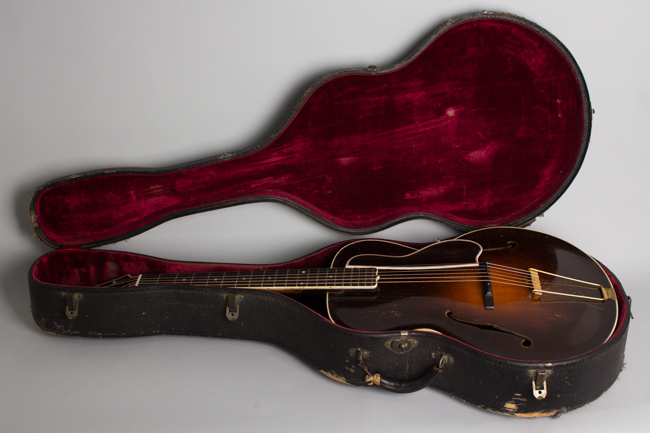 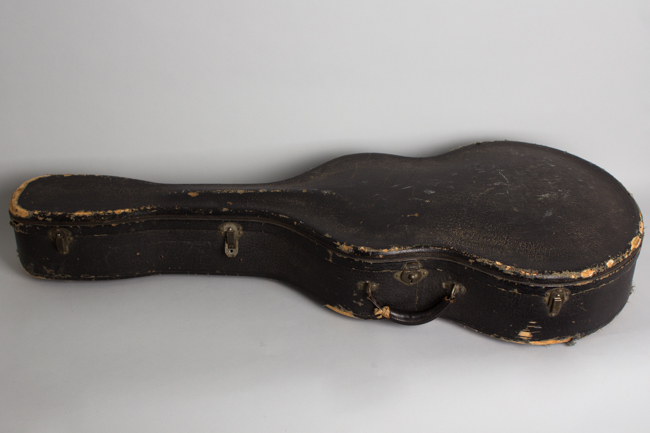 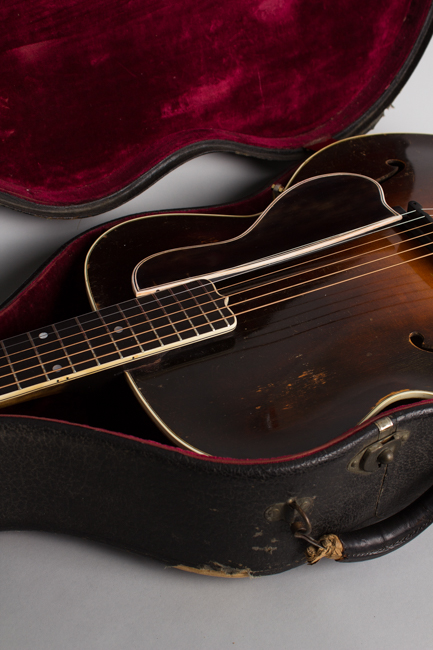 This 1931 L-5 is a beautiful if well-played example of the pre-eminent orchestra guitar of its era -- the original f-hole archtop guitar -- and an extremely fine-sounding instrument. Debuting in 1923-4, the L-5 was the first modern archtop; at the time this one was built it was the top of Gibson's line and universally considered the finest carved-top guitar made. Other makers were just beginning to explore this avenue, and the L-5 was the inspiration for all and a template for most other f-hole guitars that followed.

Orchestra and jazz band banjoists were by this time almost universally converting to guitar; the $275.00 L-5 along with Epiphone's competing Deluxe -- launched in mid 1931 -- became the choice of nearly all top professional guitar players of the time. Eddie Lang, the era's most influential guitarist, went from a Gibson L-4 to a dot-neck (probably 1927-8) L-5, then to an early block neck L-5 around 1930 setting the trend for all to follow. In mid-1931, when this one was shipped, the L-5 ruled the roost for orchestra guitars giving Gibson a market dominance that they never lost.

Most early 16" L-5s were used extensively for many years, some owners continuing to prefer them to any later guitars. They are still often seen in the hands of recording studio players well into the 1960s. As working guitars, these instruments have often been heavily modified, refitted, or refinished. This one is has a lot of play wear but structurally is far better preserved than most retaining its original character.

This guitar shows typical features for a 1927-31 L-5; the transition between variants of this model is particularly inexact and the serial numbers are not in any strict order with the progression of features. This example shows a pearl dot inlayed, 20 fret fingerboard ending in a curled point. The 3-piece laminated curly maple neck has a comfortable and modern-feeling "U" or "D" shaped profile unique to a small number of early 1930's L-5's. Soon after the L-5 went to a fairly sharp, shallow "V profile neck many players find less appealing.

The pearl inlaid flowerpot in the triple-bound headstock and straight across "The Gibson" logo are the hallmarks of the 1931 L-5, as are the original engraved, gold plated and mother of pearl buttoned Waverly tuners. The tailpiece has the older "string over" cross bar and is stamped "Patented July 19, 1910." The bridge is ebony, stamped "PAT'D JAN 18-21." The tailpiece and bridge base are both original to the guitar, while the bridge top is a modern reproduction.

The body on this particular guitar is, like many early L-5s, exactly 16 inches wide, triple-bound back and front. The spruce top and flame maple back and sides carry a beautifully blended dark Cremona Brown sunburst finish. The short triple-bound celluloid pickguard is pinned to the side of the fingerboard. This guard and the mounting hardware are modern reproductions. The original pickguard (stamped "Pat.MAR.30.09") is showing signs of celluloid decay; it is included but not mounted on the guitar.

This L-5 shows a decent amount of cosmetic wear overall but is structurally well-preserved and in excellent playing condition. The original finish shows general wear throughout but has not been oversprayed, which is hard to find on old L-5's. There are scratches, dings and rubbed away spots in different areas particularly on the back of the neck (down to the wood for much of its length) the back (some buckle rash) and under the crossbar of the tailpiece (deeply dinged from decades of errant string ends). That said the instrument is still very attractive with a subtle patina not unlike the old violins it was meant to evoke.

The only major repair is to the ebony fingerboard which is a recent replacement. This was done with era correct small fret wire and three-ply white-black-white edge binding matching the original specifications. At some point in the past, deeper binding was added to fingerboard in a pattern that resulted in a small amount of neck material being routed away, below the level of the fingerboard. When the new fingerboard was fitted, these areas were filled with small strips of matching curly maple and carefully touched up to match the surrounding neck. The structure of the original neck was not in anyway compromised and the original geometry of the neck and neck profile remain in tact.

Other than this the guitar shows only inconspicuous repair work. There is one neatly repaired crack on the bass side lower bout, otherwise the guitar is crack free, again difficult to find on L-5's of this era. The neck has been neatly reset, and there is a small hole for a strap button on the treble side of the heel. As noted the bridge top is a reproduction, and the original pearl nut has been replaced with bone. While bearing the scars of a long active life this L-5 has another century of music in it, at least. It plays beautifully and the sound is truly sublime, one of the most delightful arch top guitars it has been our pleasure to handle. The original case is still with it, worn but fully functional Overall Excellent - Condition.
×