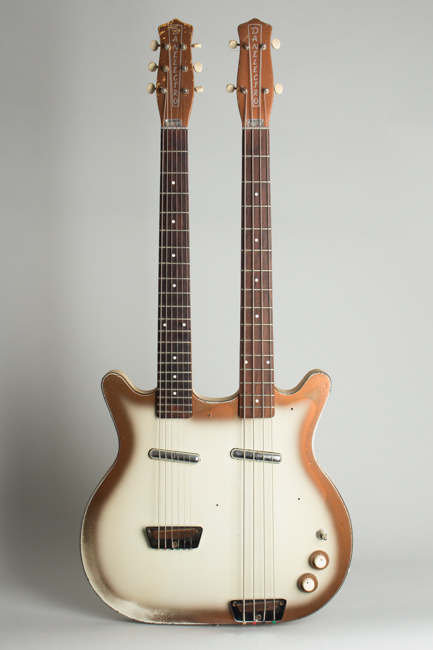 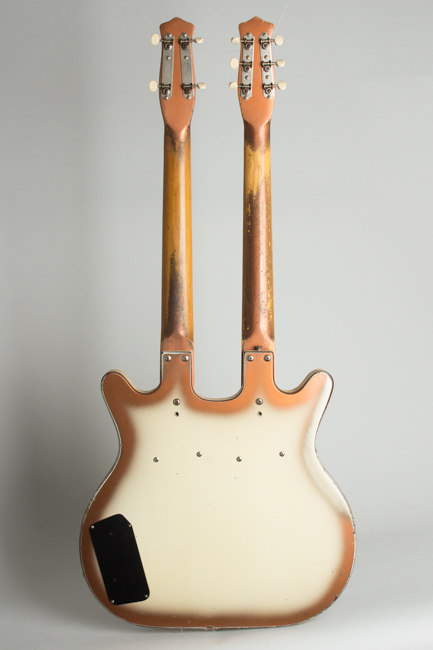 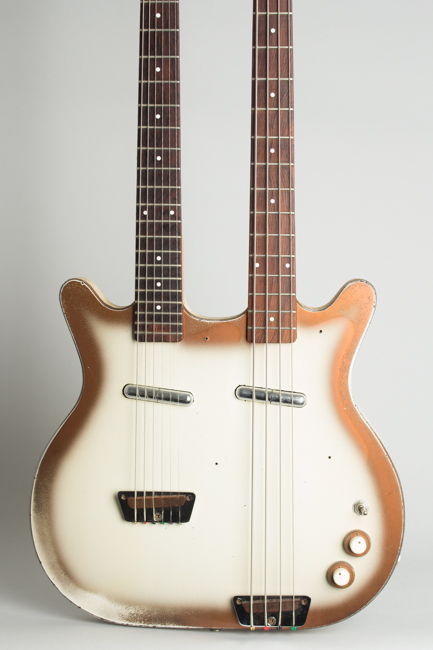 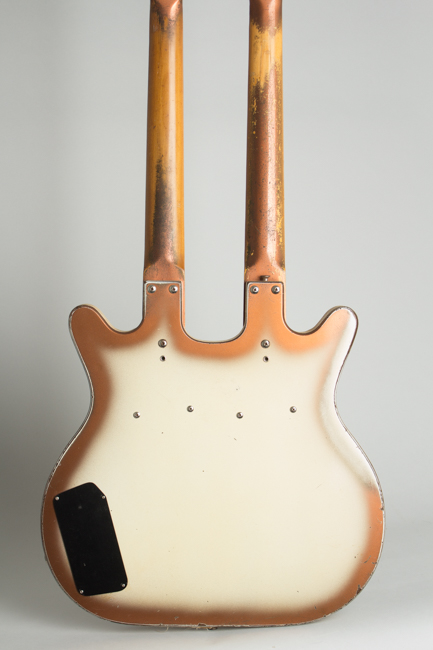 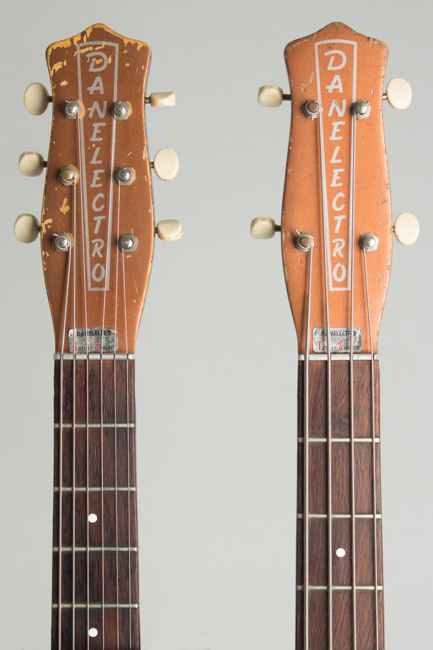 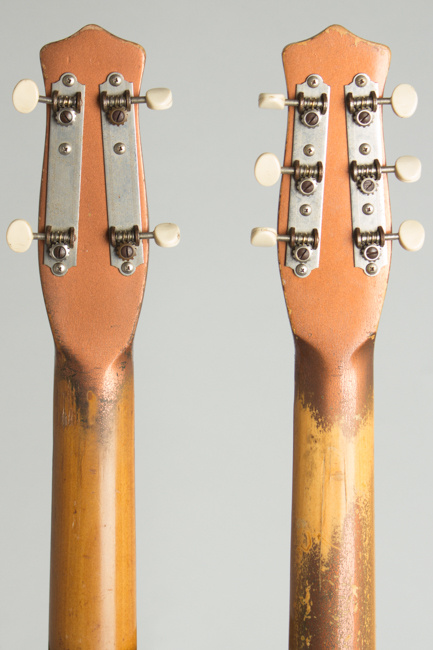 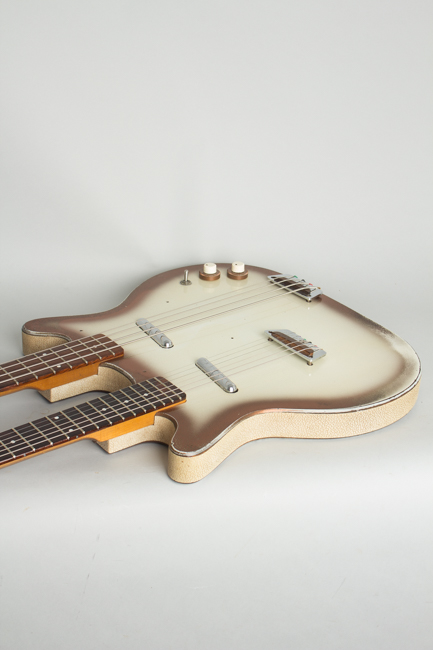 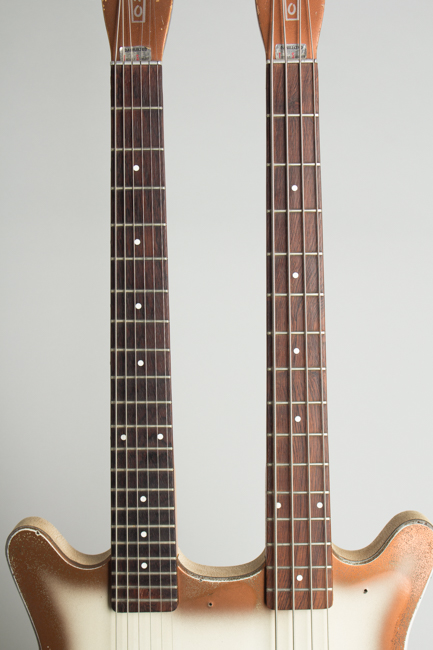 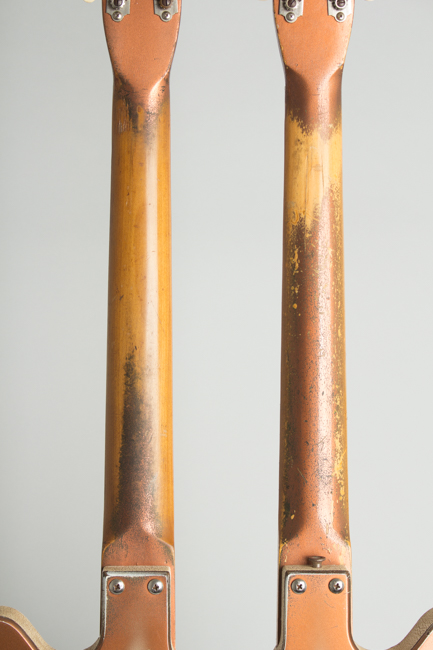 
One of Nathan Daniel's more interesting ideas -- and that's saying something -- the Model 3923 Double-Neck (yes, that's how they spelt it) remains one of the Danelectro company's instantly iconic creations. Built with Daniel's favored Masonite-and-pine body materials and standard guitar and bass parts, the model 3923 combines a single-pickup shorthorn bass with a single-pickup guitar above. While not the most versatile of doublenecks, the thinline mostly hollow body makes it easily the lightest and handiest; it actually weighs less than many single-neck instruments. This one has seen a decent amount of fairly heavy use but has survived in good playing condition.

Each neck has its own concentric tone & volume knob set, and there is a 3-way switch allowing either guitar or bass -- or both -- to be active. The sound is surprisingly good and you can actually gig with this without incurring back issues the next day! This one has lost the two clear plastic pickguards, but remains otherwise mostly original. The stamped codes inside indicate it was built in late 1964 at the high point of the Beatle-inspired guitar boom.

Often referred to as the "Stan & Dan" model due to a famous album cover featuring that gospel act with TWO of them side-by-side, the Model 3923 is a Danelectro classic and one of the enduring oddball mid-century American guitar creations. "Jed Clampett" played one on an episode of THE BEVERLY HILLBILLIES and while this model has often been used for pure visual effect it is actually a good-sounding instrument. This well-played example shows its age but remains largely original, intact, and very playable.

This is a fairly well-worn example of this eccentric Danelectro classic, showing signs of fairly heavy use, but it still sounds and plays very well. The finish shows typical wear, rubbed down on the top and back near the rims and chipped up somewhat on the headstock edges. The copper finish is worn down on the back of both necks, which is typical as for some reason Danelectro applied the metallic paint over the sealer coat, so any extended play time results in that surface getting worn away rapidly. The vinyl siding is a bit dirty but intact.

The only notable repair is two longitudinal grain cracks along the back of the guitar neck between the first and fourth frets; these are solidly sealed up but not finished over so remain visible and somewhat feelable. This is not too uncommon on Danelectro necks, typically occurring when the back of the neck was sanded a bit close to the two routs for the steel bars inset under the fingerboard. The neck is completely solid and plays fine but the spot where this occurred is plainly visible.

There are no other structural issues to the instrument; all hardware is original and all functions as intended. It is missing both pickguards; the clear plastic pieces look to have gone missing long ago and the mounting screw holes are still evident. These can be easily replaced if desired; they were made from thin clear plastic sheet cut to shape. The backplate over the control cavity on the back is a replacement.

This Danno conjoined twin has two nice straight necks and is an excellent player, albeit a rather played in and slightly funky example of this offbeat New Jersey classic. It performs exactly as God and Nathan Daniel intended and includes a more recent gig bag that is actually quite functional for carrying it around. Very Good Condition.
×