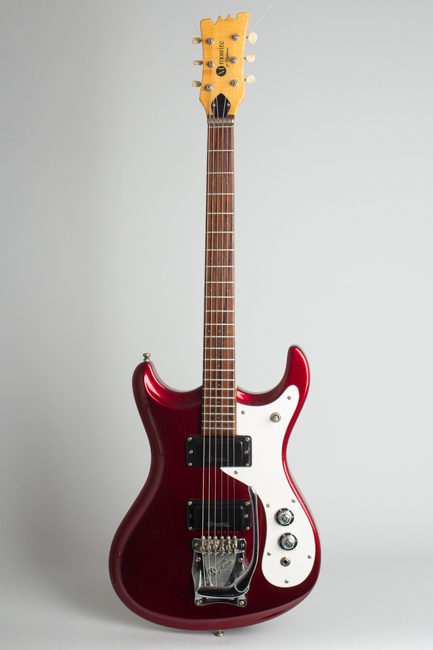 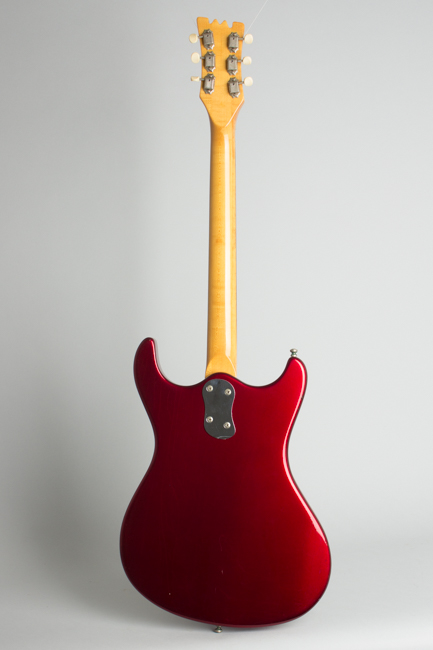 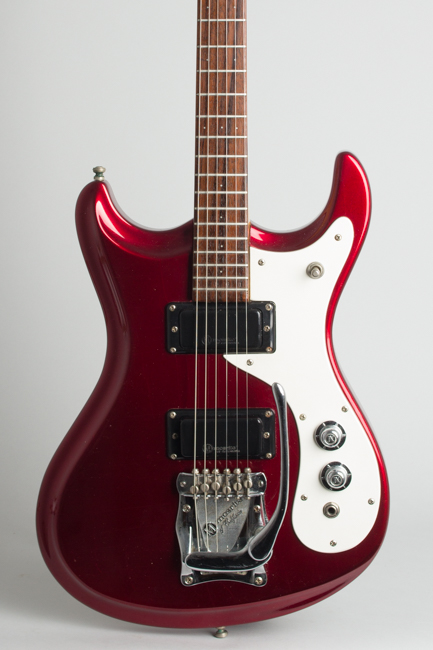 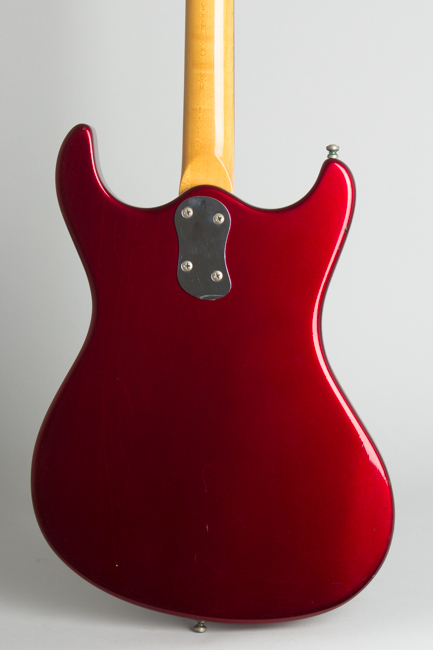 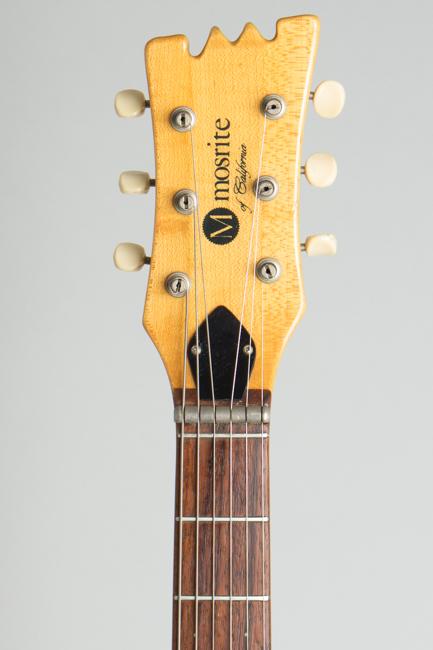 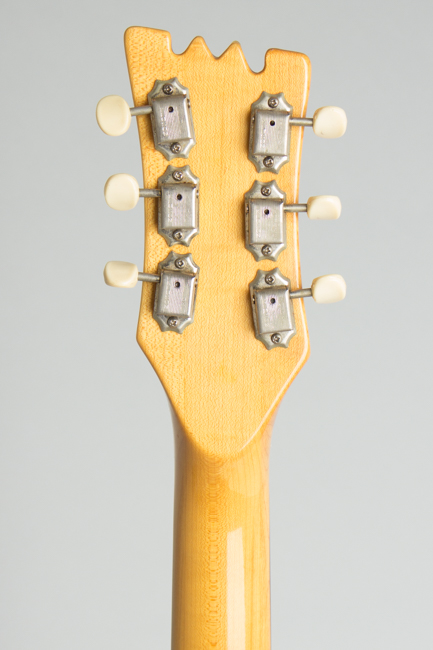 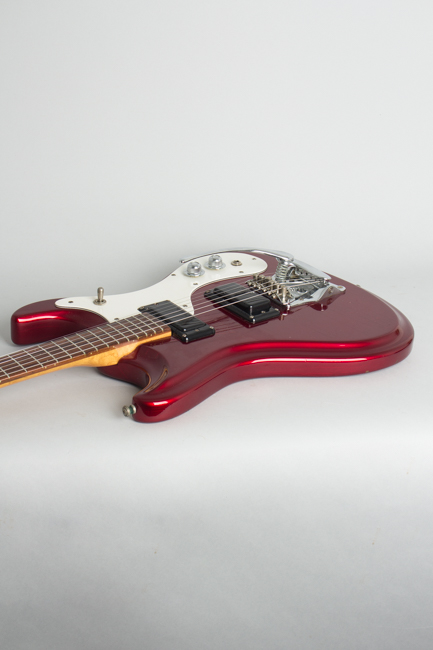 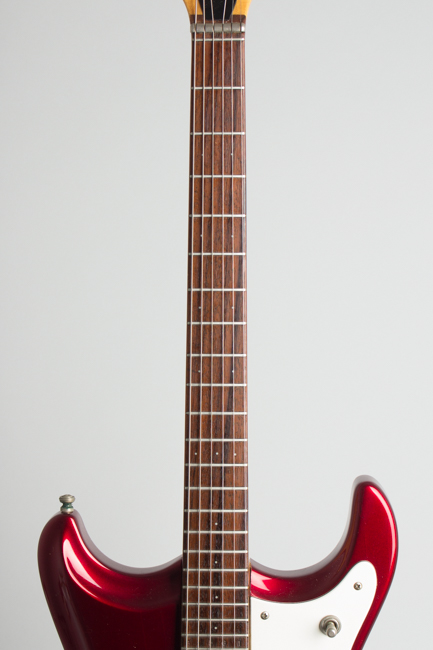 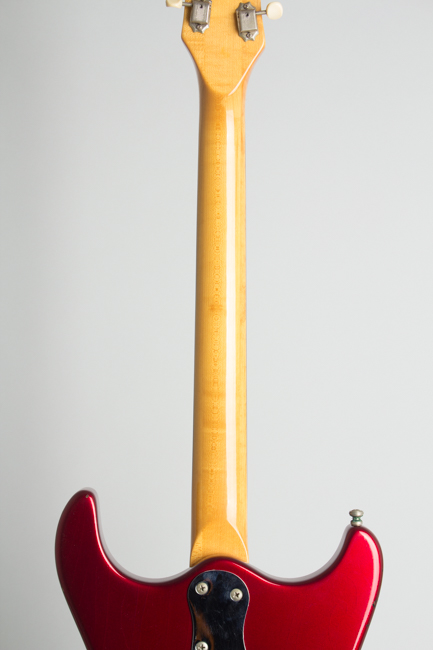 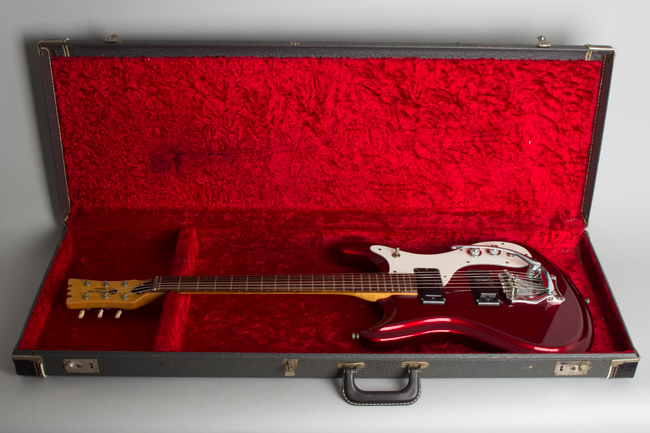 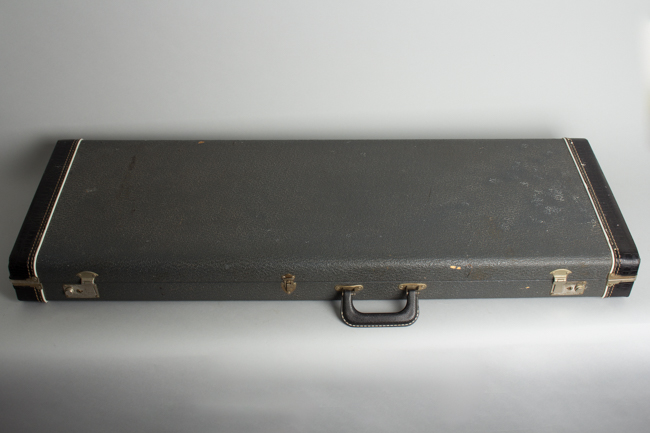 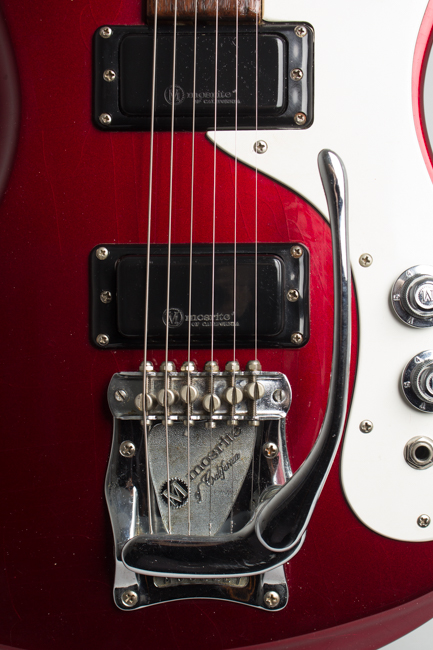 This Mosrite Mk. V Model is a somewhat rare and very hip little 1960s guitar, a sort of "Baby Brother" to the more familiar "standard" Ventures model, later designated the "Mk. I". This example was completed in late 1968/early 1969 shortly after Semie Moseley's deal with the Ventures lapsed, so does not bear the band's name on the headstock. It is otherwise the same as the earlier 1966-68 version; not long after this one was made the company went bankrupt and as production wound down features became inconsistent on the final products assembled.

Like the Fender Mustang, the Mk. V was intended as a pro-grade student guitar that had the styling of the professional model in a more economical, compact package. The stylish liquid-art solid-body with a recessed German curve sculpted edge is smaller all around than the original Ventures model, and finished in a striking vibrant deep red lacquer. Other standard '65-'68 Ventures Model appointments include the patented sleek "Mosely" vibrato tailpiece, laminated plastic pickguard, molded "M" capped chrome knobs, proprietary strap buttons and switch tip and Safe-Ti-Slot Kluson strip tuners on the "Mosrite of California" branded headstock. The Mosrite logo'd pickups are basically the same as the standard model but lack the adjustable poles.

Original Ventures style models are the most collectible of Mosrite's production instruments, and nice examples are hard to find in the US due to a long-standing fascination with them overseas. Although ostensibly a budget instrument, the Mk V was fairly expensive at $299.95 (plus a case) and built in much smaller numbers than its full-size brother. The short 24 1/2" scale, slim, fast neck, and low action make this a very handy and playable '60s guitar, although the very small "speed frets" particular to Mosrite are not conducive to heavy string bending. The single-coil pickups are meatier-sounding than many contemporary units with a fairly aggressive edge when cranked. The wiring is the same simple 3-way switch and master tone/volume rig common to all Mosrites.

The very first Ventures Mk. Vs were a slightly different design, built on a simpler flat body. This became infamous as the "Ramones guitar", the only model Johnny played throughout his career. Those are extremely rare; this later version is more common, although the model as a whole was only available for a couple of years between 1965-69. This deep metallic red example is a classic and very stylish piece of '60s California cool, till perfect for vintage styles from surf to psych and beyond, Pendleton or paisley shirt optional!

This is simply a superbly clean and all original guitar, showing a few signs of use and amazingly well preserved for its 50+ years on the planet. The finish shows some moderate checking, dings and small scuffs but that's about it. It is completely original inside and out. The very low original frets have only the tiniest wear. A real gem of a playable and great sounding period piece, complete in a very nice original HSC. Excellent + Condition.
×