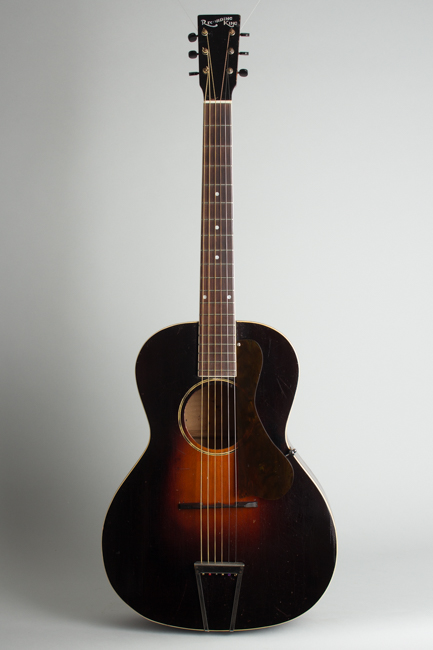 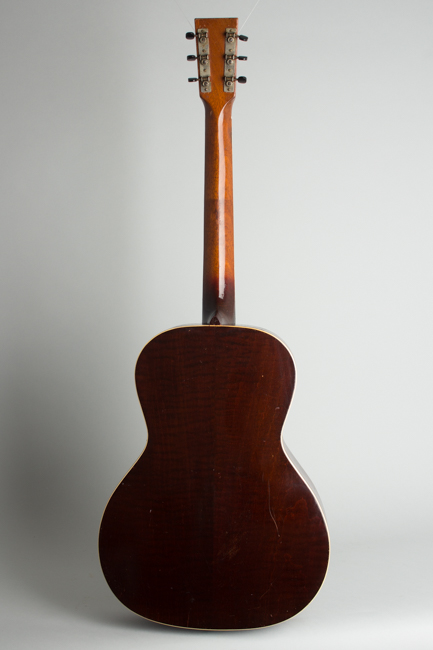 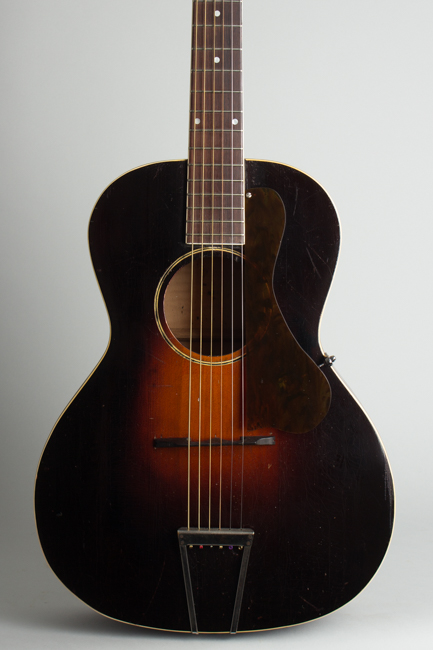 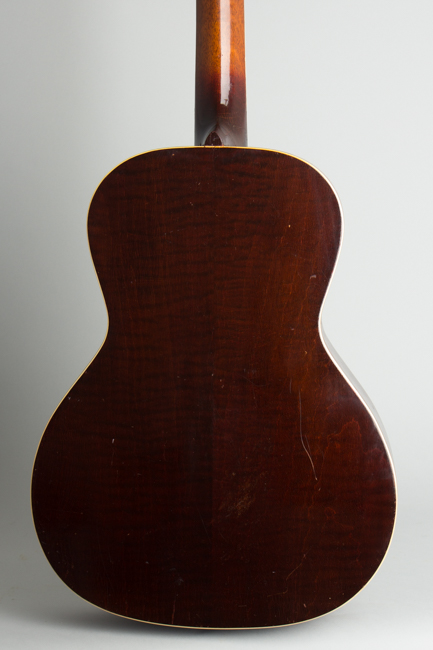 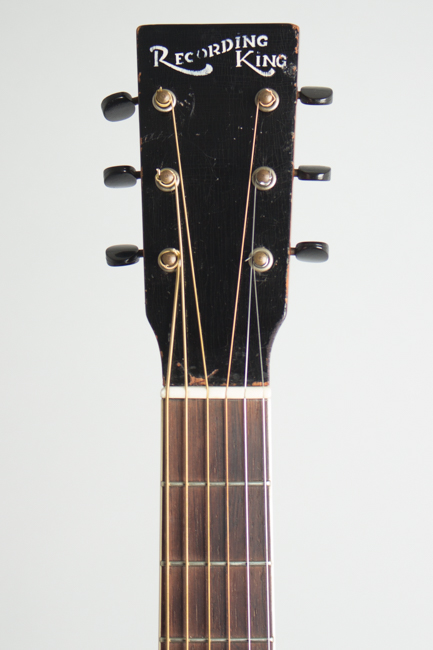 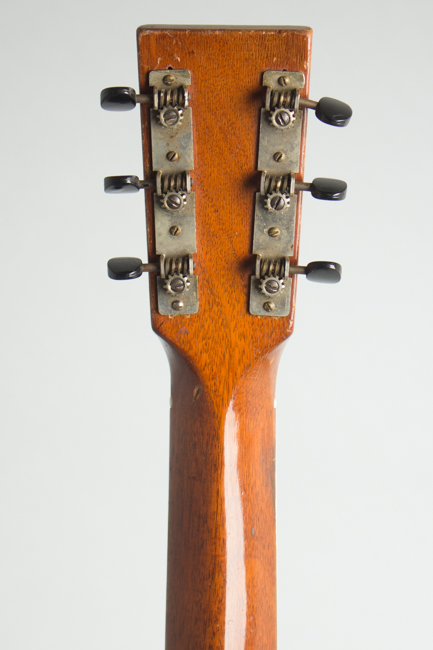 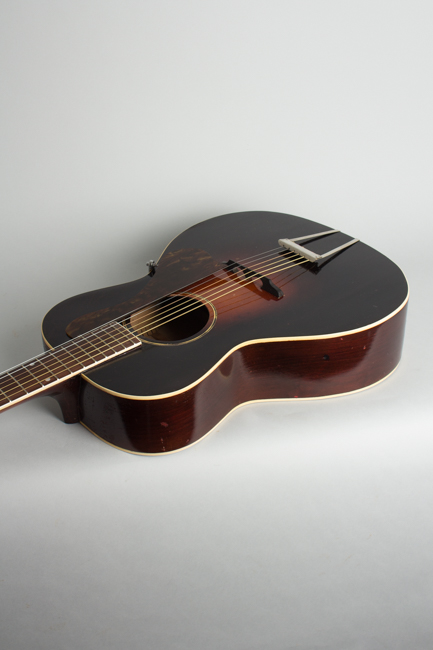 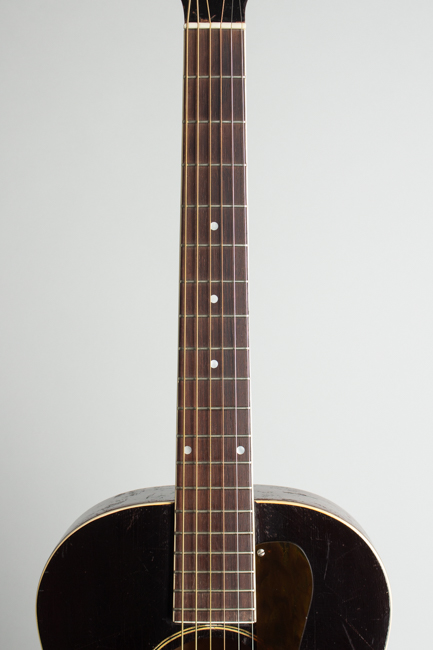 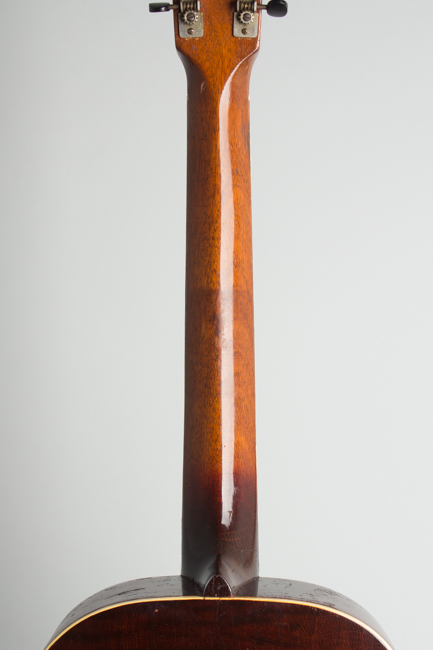 This is one of the more unusual -- and certainly one of the rarer -- of Gibson's budget brand instruments of the early 1930s. The Recording King Model 681 was made exclusively for the Montgomery Ward catalog company for a brief time in 1934-5. Wards sold a number of different styles of Gibson-made instruments through the 1930s, along with many others made by Harmony, Kay, and the like. The Gibson models are of course the best quality of Ward's fretted offerings, and many of these "Recording King"-branded instruments are quite rare today and considered quite collectible by pre-war Gibson aficionados.

The Recording King Model 681 is a seemingly odd hybrid, a guitar with an L-00 style flat-top body built with an arch-top trapeze tailpiece and a non-adjustable ebony floating bridge. This piece is carved in the style of the company's maple banjo-like guitar bridges of the late 1910s; somebody pulled out an old template! While this seems like a questionable idea in theory, Gibson actually built some of its high-end flat tops this way in the early '30s, including the celebrated Nick Lucas Special. In the case of the 681 it was likely for economic reasons, but the resulting guitar really surprised us with its powerful and more robust than expected tone. This example is built with a maple body, more like a standard archtop...some other examples use mahogany instead and tend to be a bit mellower sounding.

The top is made of three pieces of solid Adirondack spruce, ladder-braced but worked a bit thinner than the average later Kalamazoo. The back and sides are solid maple; the two-piece back even has some discreet flame figure under the brown finish. The level of build and finish are absolutely up to Gibson standards. The top and back are Celluloid bound, as is the dot-inlaid rosewood fingerboard. The top is finished in a very dark sunburst with almost no "sun" with a triple-ply sound hole ring, and the same floating pickguard is fitted that was found on many period Gibson flat-tops.

The model 681 listed in 1934 for $18.95, which in that year was not especially cheap for a mail-order guitar. The flat-topped headstock carried a jaunty "Recording King" logo, but of course there was no mention of Gibson being the builder. The V-profile neck is quite comfortable, and this guitar is certainly one of the best-sounding "non-pin-bridge" flat-tops we have encountered. The tone is bright and funky, louder than we might have expected when finger-picked, and shades well into a "mini-arch-top" mode if played vigorously with a pick, thanks to the maple body. This is certainly one of Gibson's more unusual guitars of the period; perhaps a blind alley design, but a neat period piece and a much better guitar than it really ought to be!

This guitar is fairly clean overall, and quite playable. It shows some fairly minor wear to the finish overall and a number of typical repairs. The lacquer has some checking and small dings, scrapes, and dents, but no large areas worn down. The neck has been reset -- structurally fine, but with some cosmetic imperfections around the heel -- and the fingerboard neatly refretted, in the period correct style. The nut has been replaced and there is some finish disturbance around it. The original floating ebony bridge has been cut down somewhat, and there are small pin marks where someone once secured it to the top.

The top itself shows just a bit of light touch up and overspray around the fingerboard end and sound hole ring. There is a small grain crack to the top just on the edge of the lower treble bout and another just off the rear edge on the back. The original floating pickguard is gone, but a decent if inexact reproduction has been added. The tuners are correct period pieces, but something else has been on and off again in the interim. There is a small patch added to re-inforce the center of the original large but fairly thin bridgeplate, which is otherwise intact. This rare Gibson made oddity remains a solid player, an interesting variation on the company's budget guitar concept with a sound all its own. Excellent Condition.
×