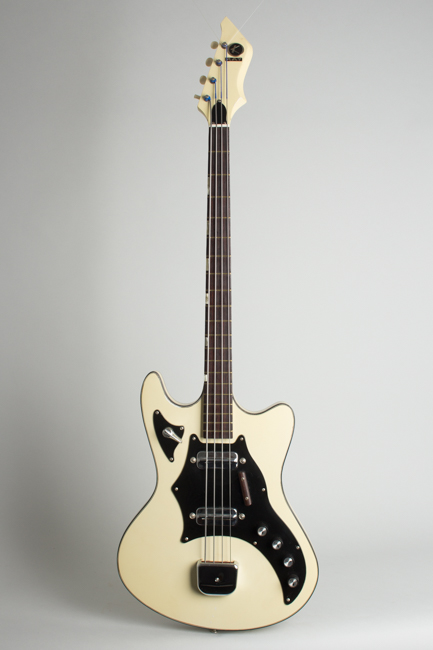 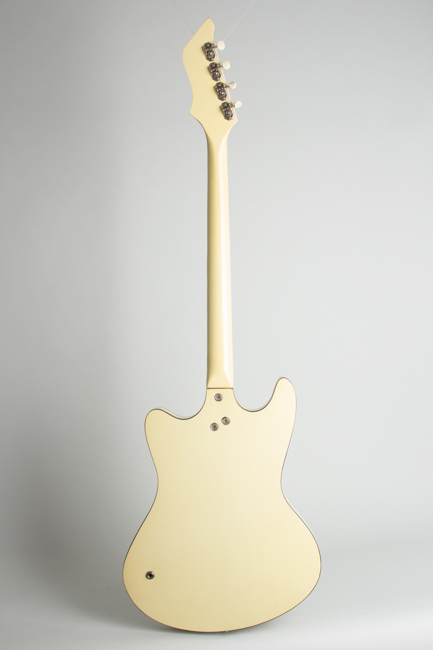 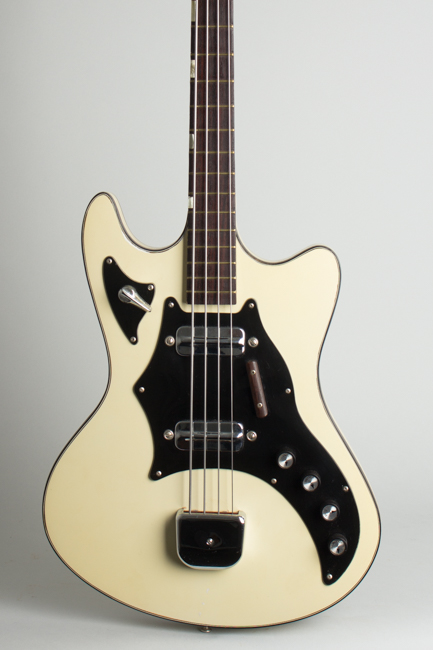 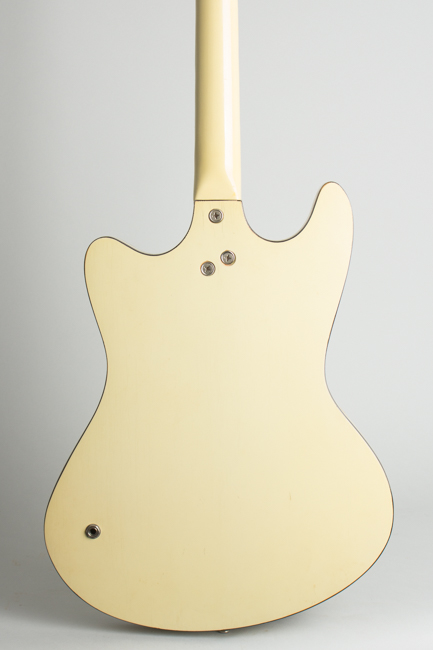 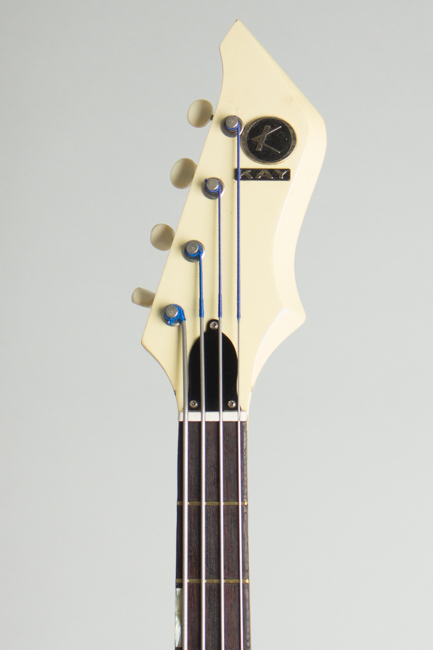 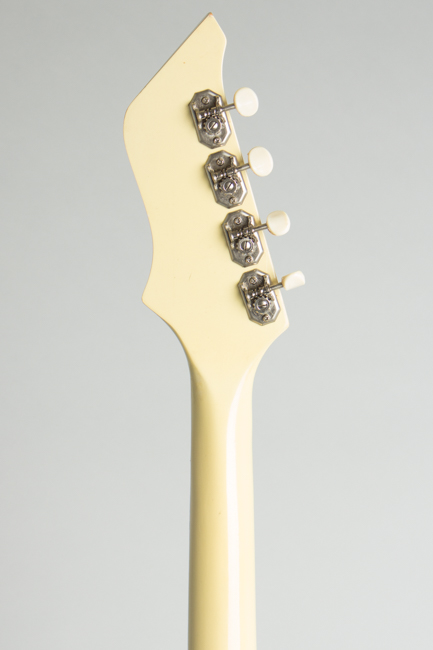 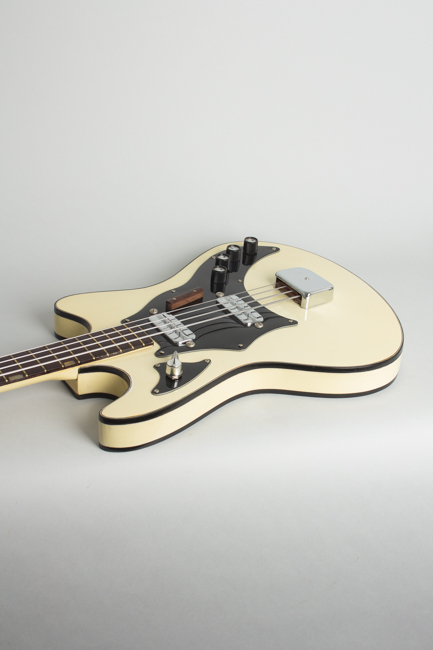 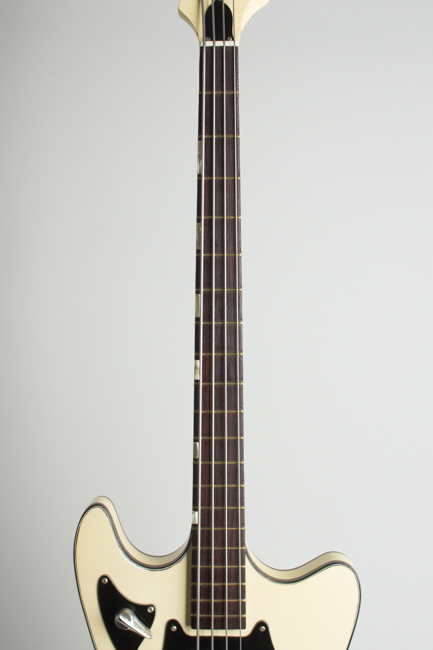 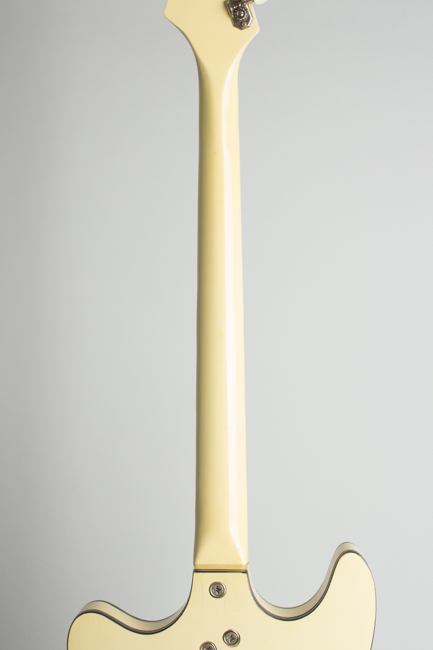 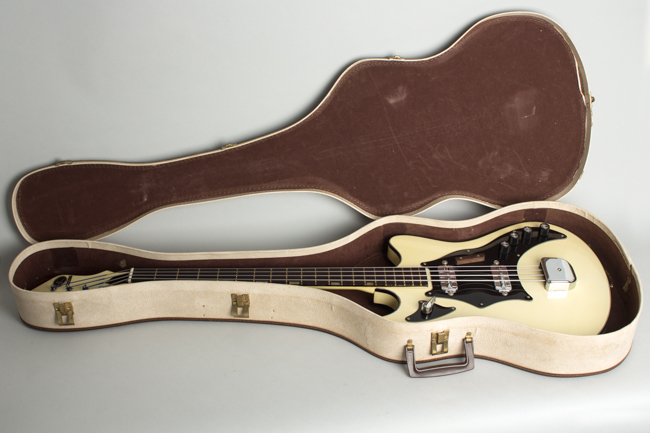 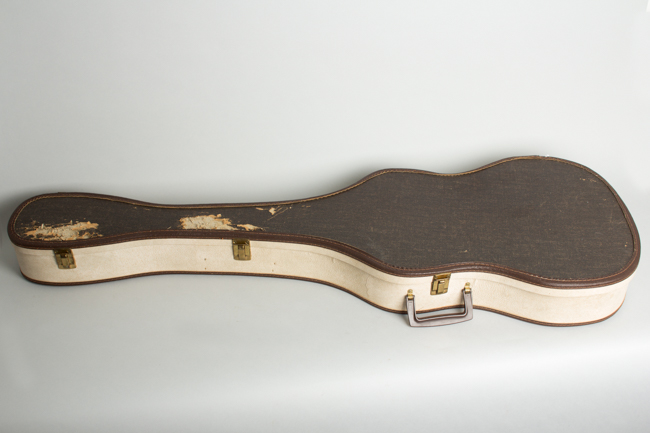 By the late 1960s the venerable Kay company in Chicago was on its last legs, having struggled with mostly outdated or just plain odd designs through the early years of the guitar boom and then losing much of the low end of the market to imported competition. Their new and flashy 1966-67 line was an attempt to modernize their appeal and included some more modern looking instruments with a somewhat Fender-y character, including this striking looking Model K-5924 bass. Unfortunately these proved too little too late and Kay did not survive the 1960s, collapsing after ill-starred buyouts and mergers before the end of the decade.

This very rare Model K-5924 bass is certainly a sharp looking instrument, visually owing little to Kay's older bass designs. It was described in the 1966-7 catalog as a solid body but is actually more semi-hollow, with a heavily chambered flat-topped bound double-cutaway body. It is fitted with a very slim non-tapered short-scale neck and two of Kay's older "speed bump" pickups. The most attractive feature is a lovely solid white lacquer finish on the body and neck, described by Kay as "Striking White". The body is accented with black-and-white binding on the edges. The fluid-shaped single-sided headstock and back of the neck are painted to match.

Kay offered this same design in six variations, single and double pickup basses each available in red, white or blue; all are relatively rare, but this white two pickup model is one of the scarcest. It is also one of the most visually arresting instruments in Kay's line and a real looker from any angle! Oddly enough there is no exact guitar equivalent to this model; the design was only offered as a bass at a list price of $125.00, plus $22.50 for the case. It was likely designed to attract the attention of teenage garage band players who could not yet spring double that amount for a Fender bass! Kay had been an early pioneer in the electric bass field starting in 1952 but had long lost any competitive advantage by this point, and this design is basically visually Fender-like while retaining the company's basic fittings.

Most of the features are fairly conventional. The short-scale neck has a rosewood fingerboard with a sort of Gretsch-like top edge inlay. The neck itself is quite slim with a soft "U" profile, slightly reminiscent of Kay's upright bass roots held over from their earlier electrics. An adjustable truss rod is fitted, accessed at the headstock and a huge improvement over earlier Kay designs. The two single-coil pickups are located in the center and neck positions on the body, giving a nice Fender-y midrange sound, with a deeper tone as needed. Each has a volume and tone control and there is a silver-painted selector lever mounted on a separate small pickguard piece on the upper horn. A rosewood fingerrest is set at an angle on the laminated black plastic pickguard.

The headstock is fitted with single-unit guitar-size tuners with plastic buttons, a concession to the budget. The solid height-adjustable rosewood block bridge and simple stamped metal tailpiece are typically basic Kay fittings; they are hidden away under a chrome cover that bears a "made in Japan" sticker on the underside. The one howlingly weird feature is the jack, inexplicably located on the BACK of the body instead of the side or top. Perhaps someone at Kay thought this brilliant idea was nice and discreet (or something) but it pretty much necessitates a right-angle cord to avoid constantly banging the plug into the players leg!

Playing-wise this bass is typically Kay, meaning functional but pretty basic (no pun intended). The frets are Kay's long-serving brass wire, indifferently fitted but still playable without incident. The string spacing is very narrow from the nut to the bridge, again a feature of older Kay basses. The sound is surprisingly good, the "Speed bump" single coil pickups being one of Kay's better ideas and the twin-pickup positioning well thought out. The middle position in particular has a nice somewhat scooped tone typical of double pickup basses. All in all, not exactly a professional grade instrument by 1960s standards, but a better choice than many of the early imported basses it briefly competed with. And this one sure is a looker, guaranteed to be a 4-string conversation piece in any context!

This beautifully preserved bass is VERY clean, complete, and all original. There are a few small finish touch ups (mostly to the edges by the binding), but overall the white lacquer shines like new. There is no heavy lacquer clearcoat to turn yellow, so unlike Fender instruments from the period, the color has not changed much over 50+ years. There are a few scuffs and small spots that look like errant glue visible on the top between the switch and fingerboard. The back shows some light plywood checks and there are two small hanger marks on the sides of the headstock. The klunk switch has lost some of its silver gleam. We're really nit-picking here, but aside from these small aberrations the finish is close to perfect.

The often notoriously poorly fitted brass Kay frets have been polished out a bit, and are in better condition than most. The fingerboard kicks up slightly at the body end but the neck is otherwise is quite straight and this is a very playable bass, especially compared to most Kay instruments from this later period. This is a truly stellar example of one of the fading Chicago giant's best final-generation offerings, looking only very slightly used and showing little evidence of its half-century on earth. We can hardly imagine finding a better one unless it has been wrapped in plastic since 1967! The original chipboard case is still present, completely solid and functional but with some heavily scuffed spots through the covering on the lid. Overall Excellent + Condition.
×