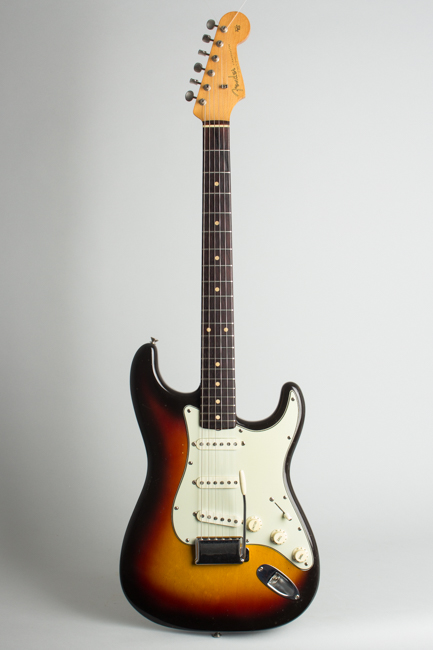 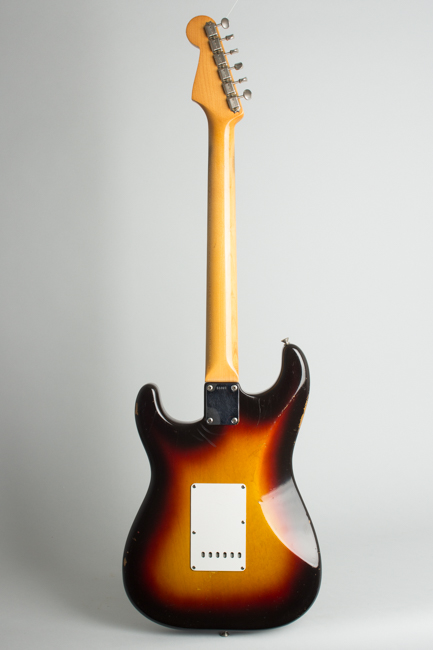 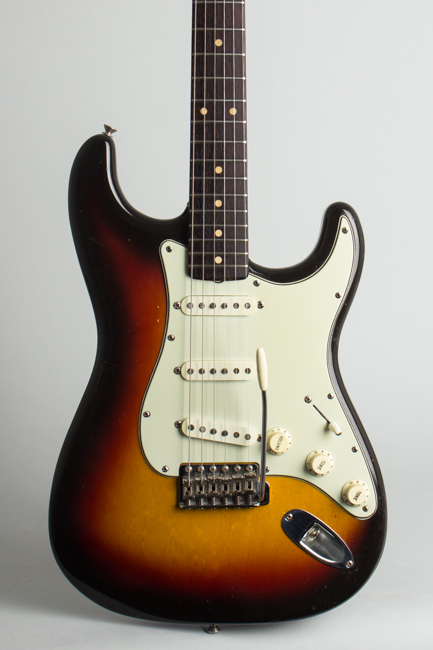 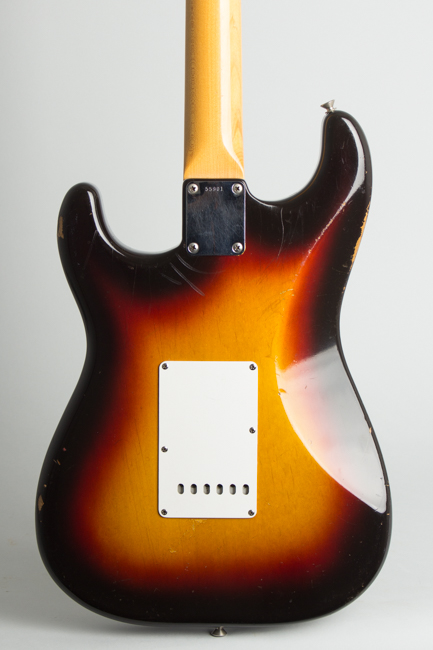 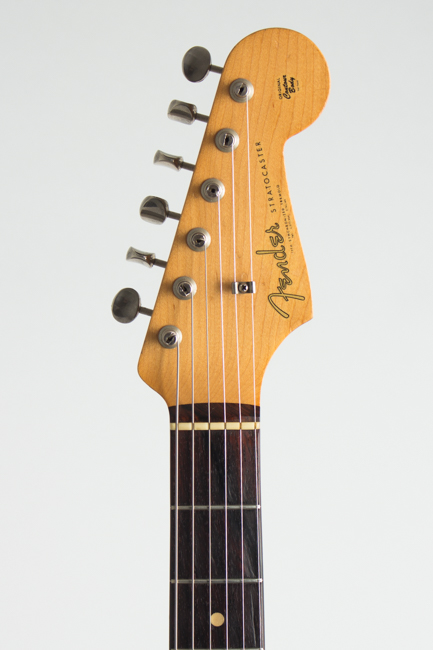 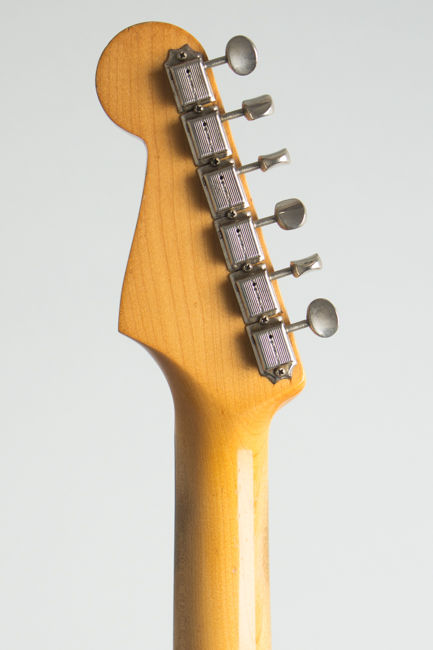 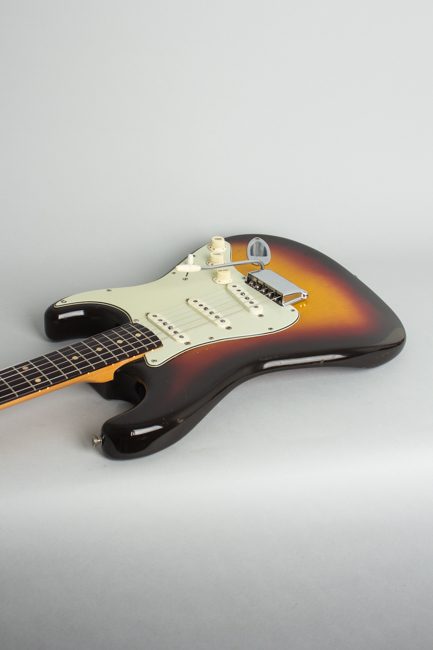 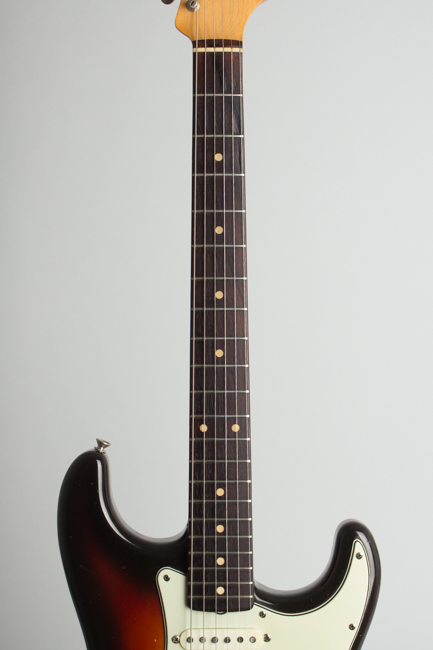 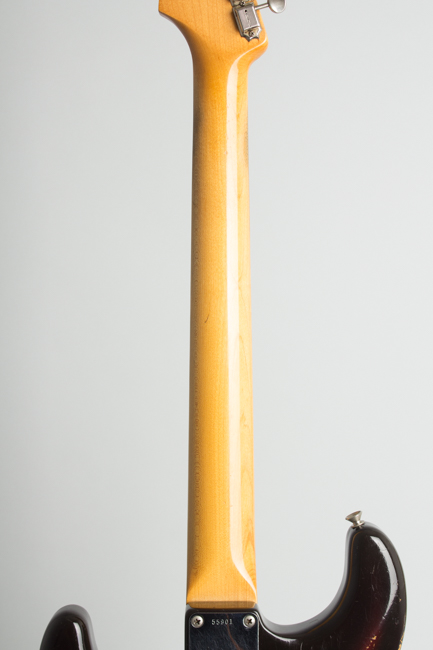 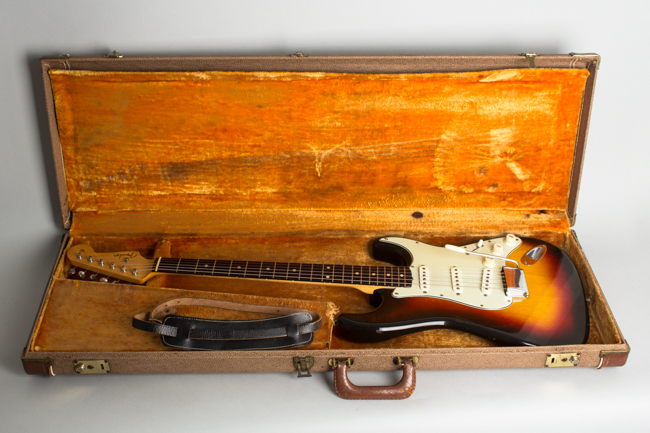 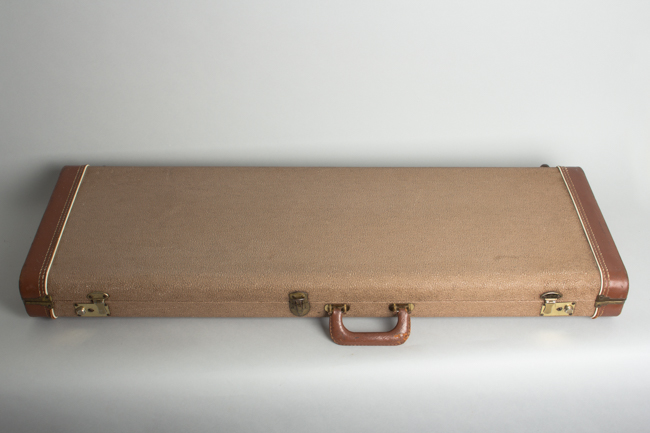 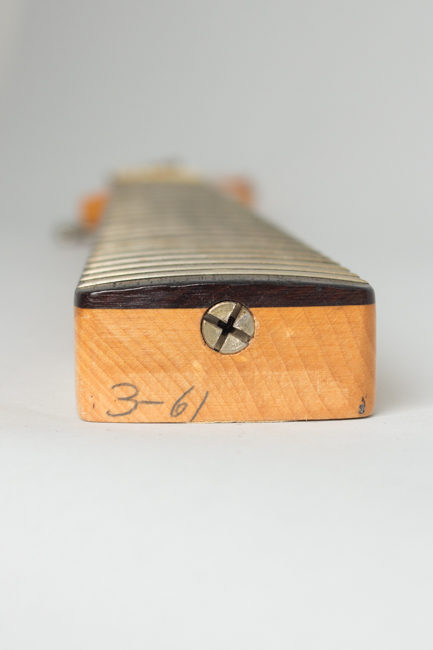 This is a very clean and all original slab-board Pre-CBS Stratocaster, beautifully preserved with vibe to spare. It shows typical features for the period, when the Stratocaster was still a popular model but had been supplanted by the Jazzmaster as Fender's top of the line offering. While many of the Surf'n'Twang players over the next few years would favor the Jazzmaster and its flashier sister the Jaguar, the Stratocaster remained distinctive with its 3-pickup layout and unique trem system. Surf Master/Originator Dick Dale always exclusively favored the slab-board Stratocaster, proclaiming he could not see why others would use anything else!

This guitar is a prime example from just around the dawn of the surf rock era. The neck carries the original smaller Pre-CBS style headstock with the older gold "Spaghetti" logo decal that was phased out in 1964. The rosewood fingerboard is the thick version used from 1959, now referred to as the "slab board" to distinguish it from the much thinner laminates Fender began using after 1962. It is inlaid with the "clay" dots that would also be phased out at the end of 1964. While these are subtle changes, they make a difference to Strat afficionados, giving each period's instruments their own distinctive character.

The sunburst finish on the body is a deep and nicely blended 3-color mix that still retains its luster despite the passage of nearly 60 years. The pickguard is a beautiful example of the lovely thick greenish-hued nitrocellulose that would also disappear in 1965, replaced by plainer white plastic. The neck and body are both hand dated in pencil 3-61; this guitar would have likely been assembled and sold in the spring of that far-off year.

All three single coil pickups have a strong well-defined tone, and the "in between" settings offer up a "Stratty" quack without sounding as glassy as some earlier or later models. The early 1960s slab board Stratocaster has become a player's favorite over the last few decades, often offering up a meatier tone than either the earlier maple fingerboard guitars or the later CBS period examples.

A fabulous example of the undying appeal of prime Fender mojo, still housed in its lovely original brown Tolex case with the original trem arm, bridge cover, and strap. This is simply a great-sounding Strat, an example of what Fender's reputation and success were built on well before "things started a-changin" in Fullerton with the January 1965 sell-out to CBS.

This is a completely 100% original guitar, showing some light wear but still in excellent playing condition. The finish on the body has small dings, dents, and chips, but no large areas worn away. The only larger spots where noticeable wood is exposed are on the sides, the largest on the lower horn (typical "case wear") and on the upper back in the cut-out near the upper edge. There are some deeper scratches and "strap burn" marks on the back near the neckplate. There is some scuffing on the face from pick action above the neck pickup and fingerboard that is not deeply into the finish.

The back of the neck has some finish loss on the edges in the lower positions, but overall is relatively well-preserved. The original small frets have been crowned down somewhat but are still quite playable, with just a bit of wear in the lower position. There is a noticeable divot in the fingerboard on the treble side in the first/second string area between the second and third fret, and an odd long scratch between the third and fourth that might have come from fingernail action. These do not affect play in any noticeable way.

This guitar is completely original and unaltered internally with untouched solder joints and all original components. The pickups are all very strong and sound great. While it shows obvious signs of play, it remains far better preserved than most period Stratocasters, which were often heavily worn and modified through the 1960s and '70s. This "played but straight" example of a Slab-board Strat is one of our more requested instruments, and we are thrilled to offer this delightful example in its original brown Tolex case. Overall Excellent Condition.
×