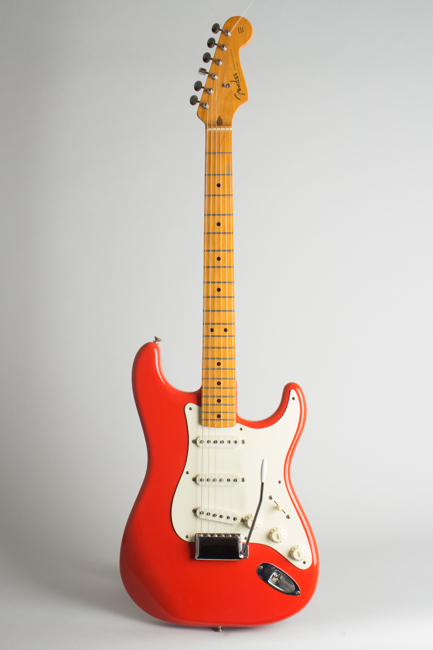 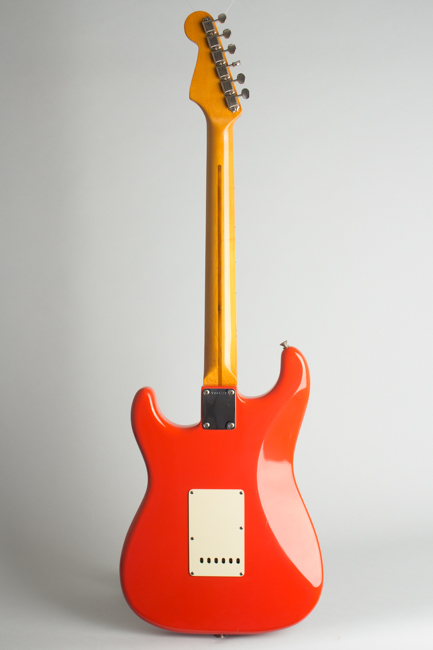 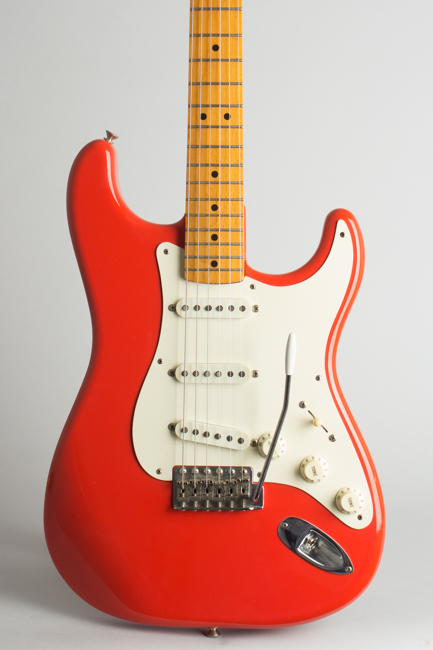 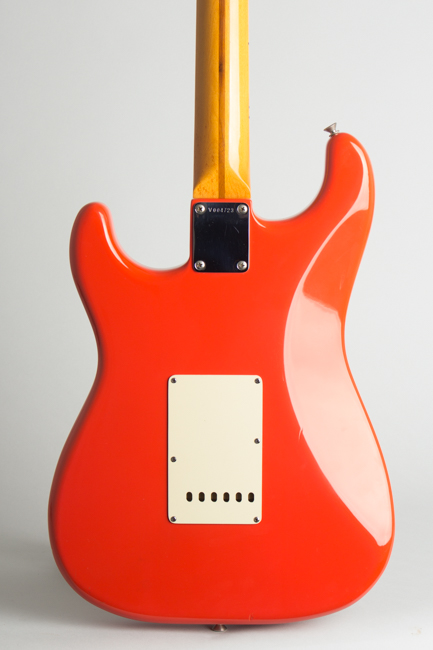 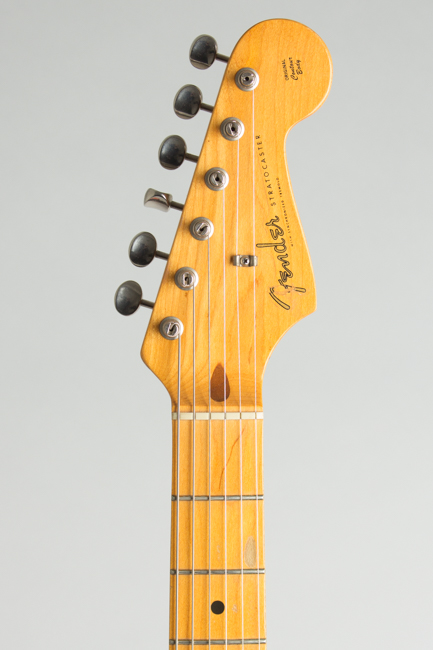 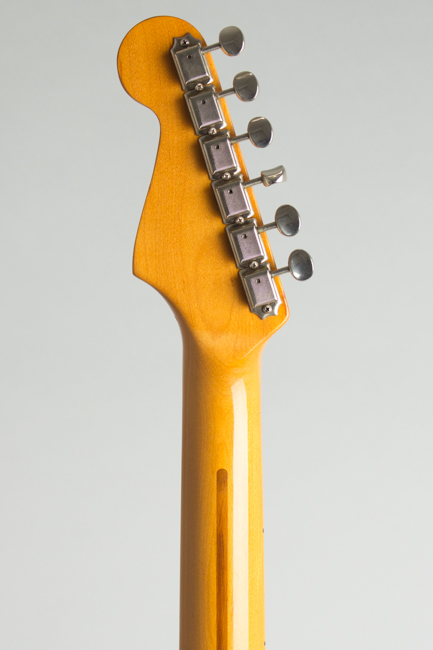 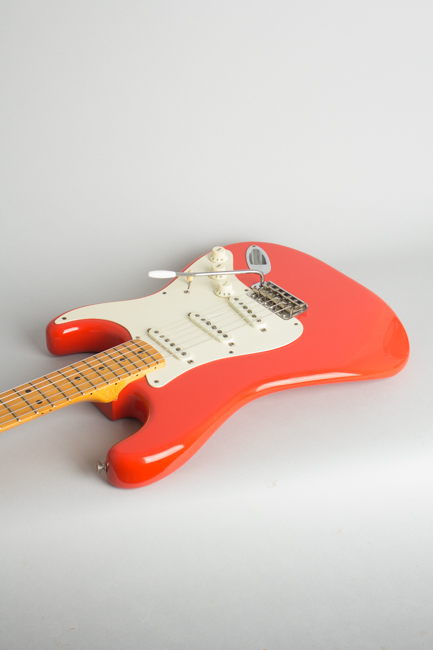 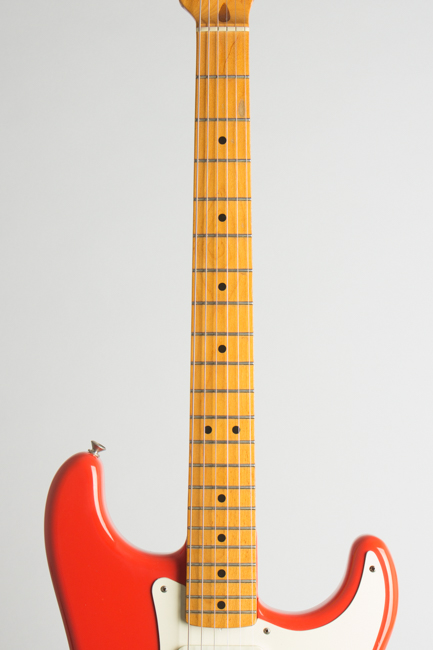 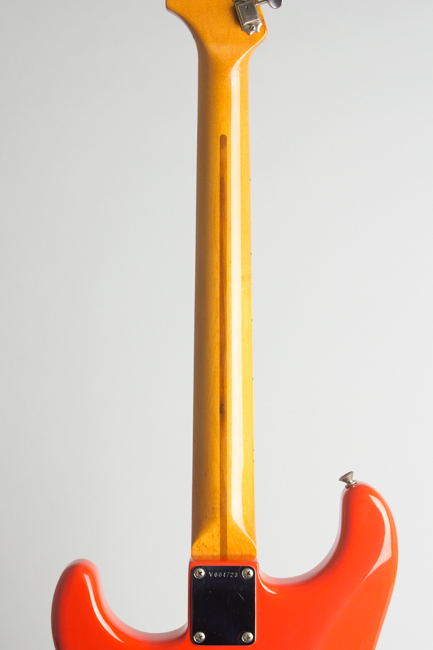 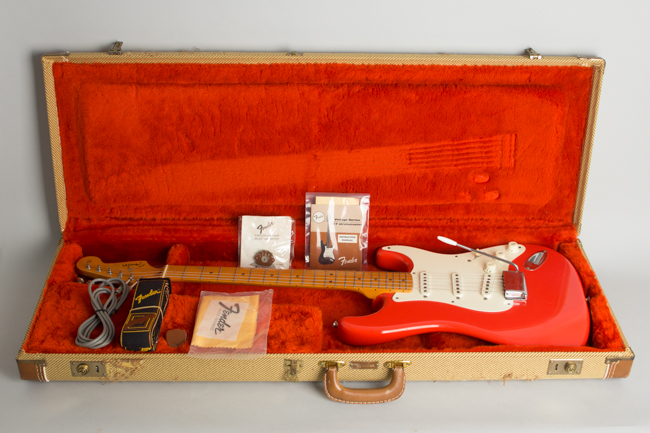 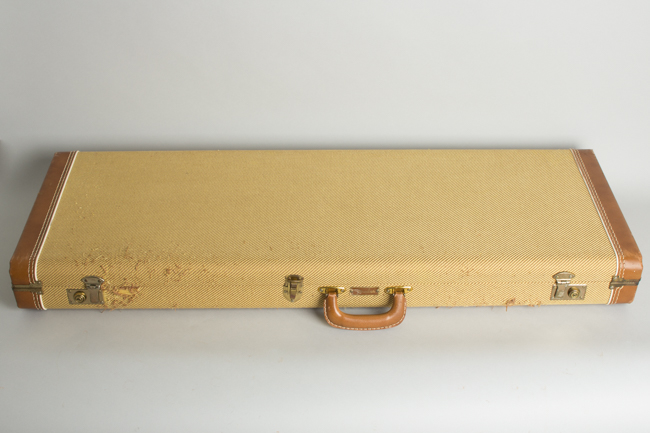 Around the time the CBS/Fender era was coming to an end, criticism from musicians that the corporation had long been sacrificing quality to improve profitability had begun to sink in with the folks running the company. A group of Fender executives initiated a project to re-issue selected models in their older formats to prove that they could achieve a return to pre-CBS quality. This led to a set of Fenders which were carefully made reproductions of 1950s and '60s classics produced in the original Fullerton, California production facility. These Fullerton-made instruments have become quite sought after in the years since and are known by the collector's acronym -- "AVRI" for "American Vintage Re Issue"

This Custom Color 1983 1957 reissue Stratocaster is one of the true gems of that short-lived Fullerton-made line, in production there for only about two years. This is a fairly rare find nearly 40 years on, especially in this lovely Fiesta Red shade. It carries a early neck plate number V004723; 1983 models alone ran well into the 5-digit range. It has been with the original owner since new and is fully original internally and externally. It is generally thought that only 5-10% of these Fullerton factory '57 re issues from 1982-1984 were finished in the custom colors offered: black, vintage white, candy apple red, lake placid blue, and fiesta red. Fiesta Red and Lake Placid Blue are considered the rarest.

Designed as a close copy of the original 1957 Stratocaster, the 1983 57 American Vintage Reissue features a 21-fret maple neck with maple fingerboard, vintage-size frets, alder body, white pickguard, 3 American Vintage single coil black bottom pickups, optional 5-way selector switch, and vintage-style vibrato/bridge. The Pots are date coded 8248 (the 48th week of 1982); there is no date marking on the neck heel but the familiar J.Torres inspection mark is present. This guitar was likely assembled in early 1983. It is all original, with the caveat that the optional 5-way switch that Fender provided with the guitar is installed; the original 3-way is in the baggie in the case. The vibrato is factory set up with 3 trem springs; the other two springs are still in the sealed envelope. The trem arm and bridge cover are also stock, as is the original heavy duty re-issue tweed case with some vintage style accessories.

While these guitars are not EXACTLY accurate re-creations, they were far closer than anything Fender had built since 1966 to Leo's original creations. The Fullerton reissue era was very brief and lasted only from 1982-84, as then Fender was sold off by CBS and moved to a new Corona, CA factory in 1985. These Fullerton guitars -- made on some of the old machines dating back to the '50s and '60s -- are prized today for their rarity, tone, and direct connection to the original Fender company.

This is an extremely clean guitar overall, 100% original and showing its age in a few places, but without many signs of serious use. The body finish is amazingly well-preserved, with mostly just some light handling marks. There are some belt-buckle dents and dings in the back but no wear through the finish at all. The neck is not quite as clean, with one wear spot through the lacquer in the fingerboard, and some very light wear to the original frets in the lower positions. There is a damaged spot where the "F" area of the Fender logo decal pulled up and shifted a bit; these were applied over the lacquer in true vintage style. There is some light corrosion on the bridge and saddles.

The original case has moderate "cat wear" to the outside (cats love tweed cases) but is otherwise well-preserved. The woven Fender trap, hang tag booklet, vintage-style cord, and polish cloth are still in the pocket. This one-owner guitar is a really cool find, a great-looking, playing, and sounding Stratocaster that is one of the last links to the original Fender Fullerton factory. Excellent + Condition.
×