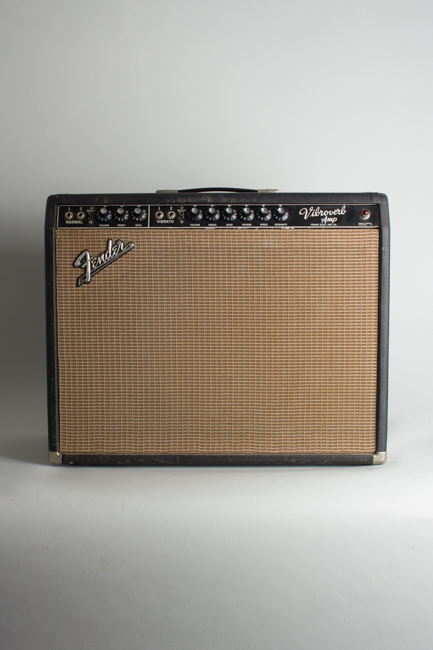 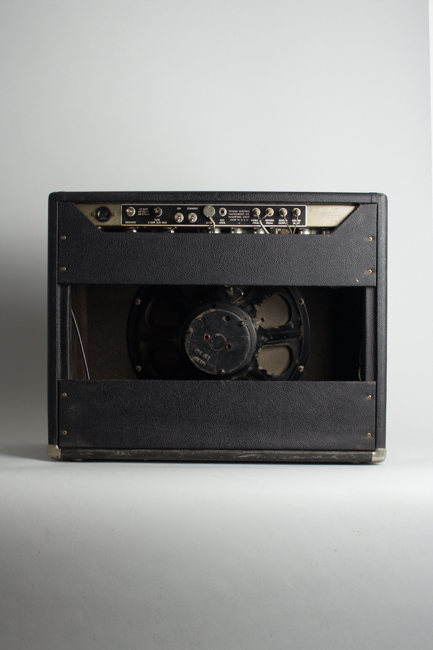 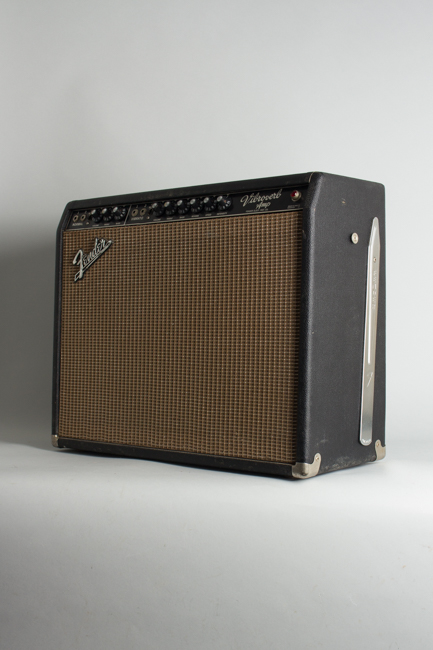 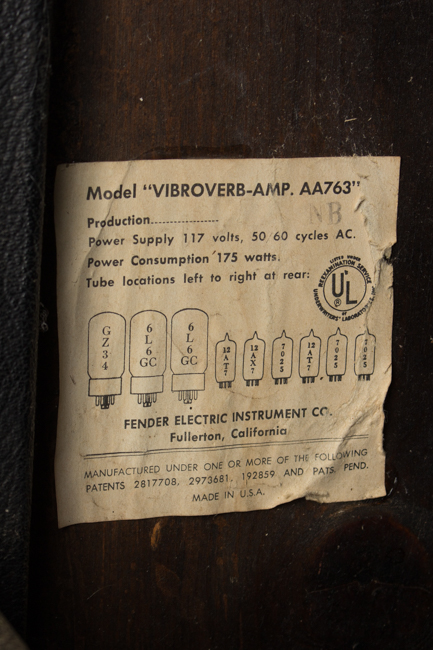 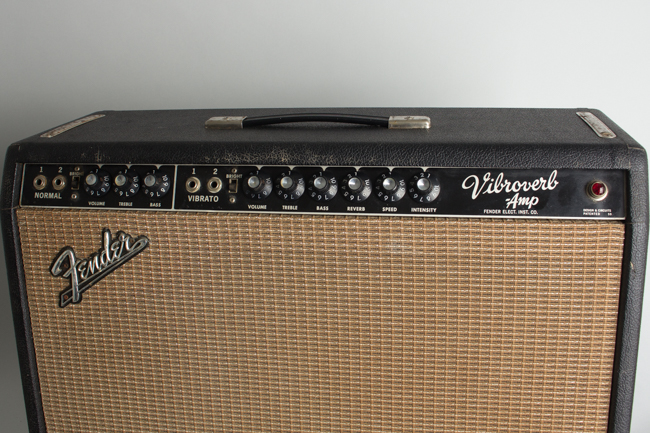 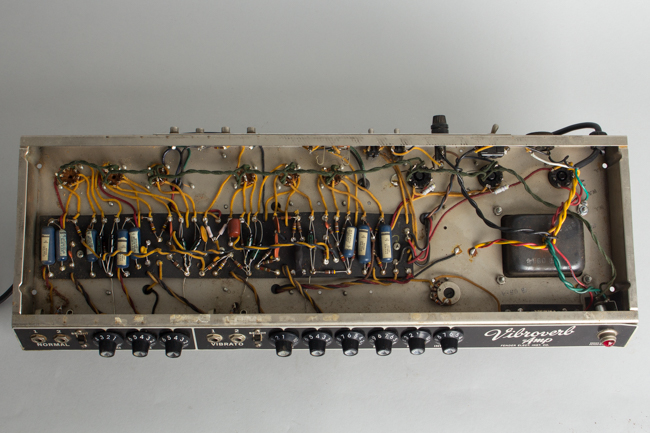 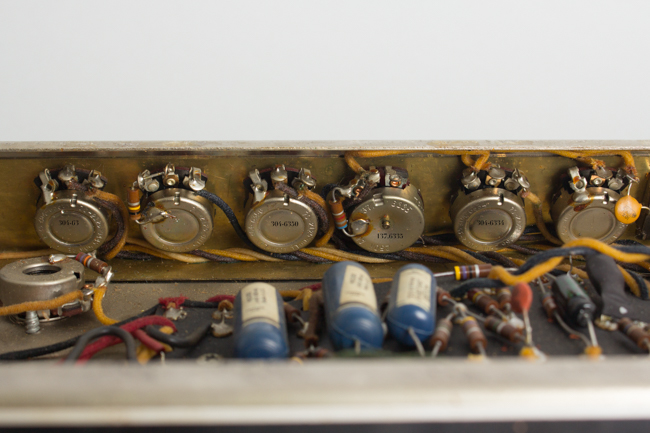 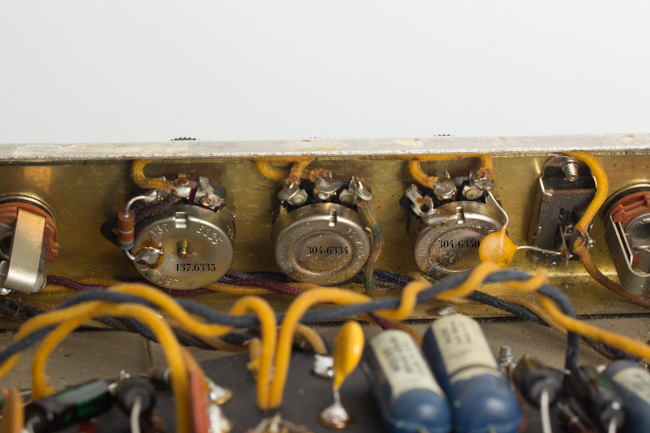 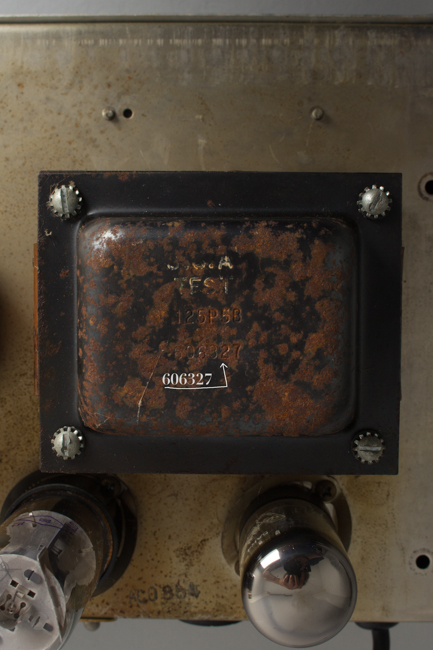 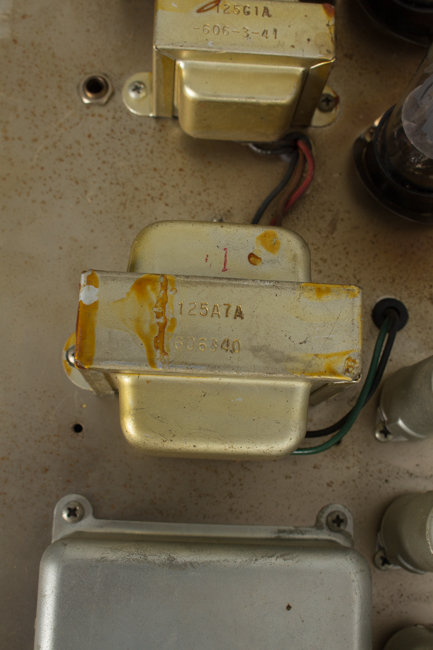 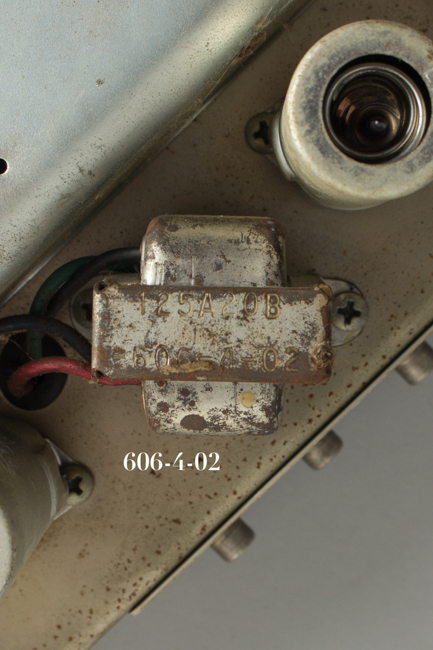 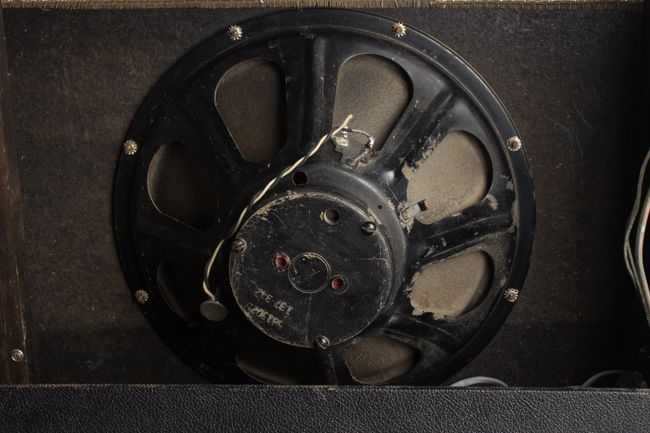 This 1964 Vibroverb is a fairly rare Fender model, remembered now primarily as "The Stevie Ray Vaughan amp", but it has much else to recommend it! It was Fender's first on-board Reverb-equipped amplifier, introducing one of the company's most heralded features. The first version was a brown-Tolex covered 2 X 10 speaker model, then at the end of 1963 it was altered to a 1 X 15 design with the all-new black Tolex trim. The early production black panel Vibroverbs like this one were equipped with a 15 inch CTS speaker -- Fender later changed the compliment to either a 15" JBL or Jensen P15N. Some players insist the CTS speaker has its own magic tone, even compared to the better known Jensen and JBLs. The Vibroverb puts out around 40 watts of power and was the only 1960s Fender amp to combine the big, slightly darker-sounding 15" speaker with on-board reverb and tremolo.

This amp shows moderately light wear but remains nicely original, with components dated from mid-1963 into the beginning of 1964. The tube chart code is NB, indicating assembly in February that year. The Speaker is the first model CTS coded 137-342. The transformers are all original, date coded as follows: Power = Schumacher 606 327, Output = Schumacher 606 340, Choke = Schumacher 606 341. Reverb = Schumacher 606 402. The pots date to mid/late 1963. There is newer cabling on the reverb/trem pedal, but externally no other alterations. Overall the amp shows some signs of minor exposure to moisture including light corrosion in some areas of the metal, but nothing that impedes function.

Internally this Vibroverb has had our standard servicing, including replacement of all electrolytic caps, any leaky coupling caps, addition of a three-prong grounded power cord, removal of death cap, and biasing to spec. The tube compliment is an Amperex 5AR4 rectifier, a newer pair of 6L6GC equivalent NOS military spec Russian power tubes, and an assortment of preamp tubes, some are NOS RCA 12AX7s.

Since the 1980s this has been a very sought after amp, both due to the Stevie Ray connections and its intrinsic qualities. It was discontinued in late 1964, and so is much rarer than other Fender combos. The sound is unique, powerful, and deep but with no loss to the top end typical of Fender. This is a rare treat in a Fender amp, and one of Leo's last true gems before the CBS cloud descended over Fullerton. Overall Excellent - Condition.
×