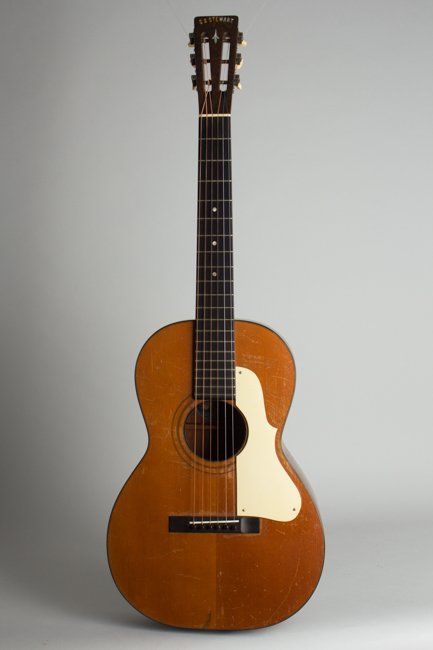 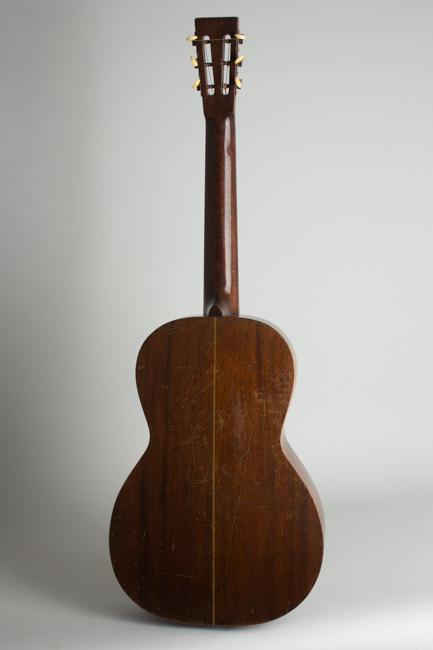 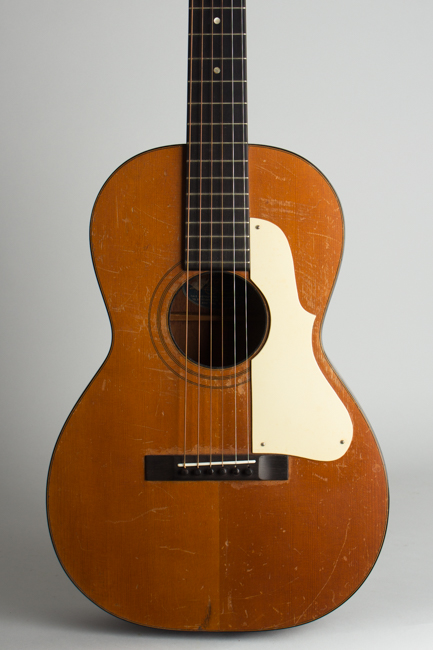 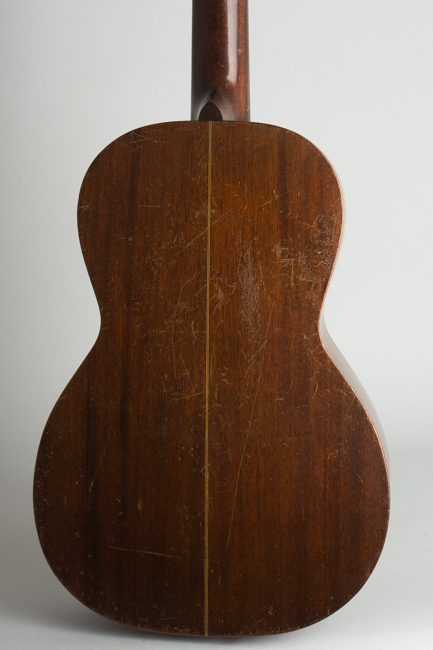 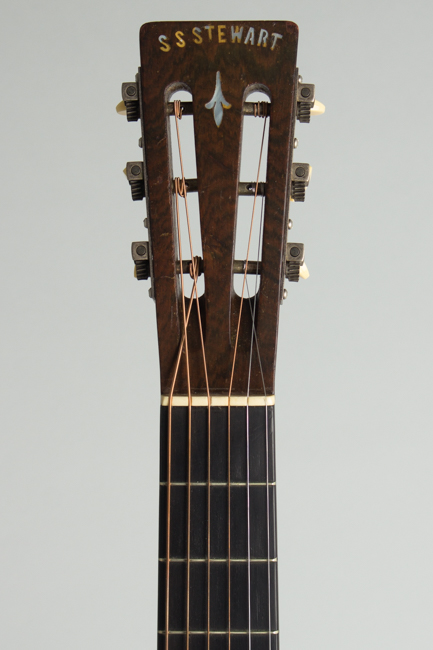 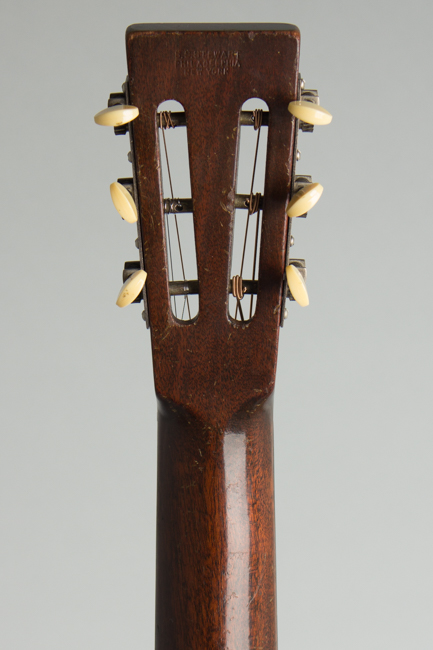 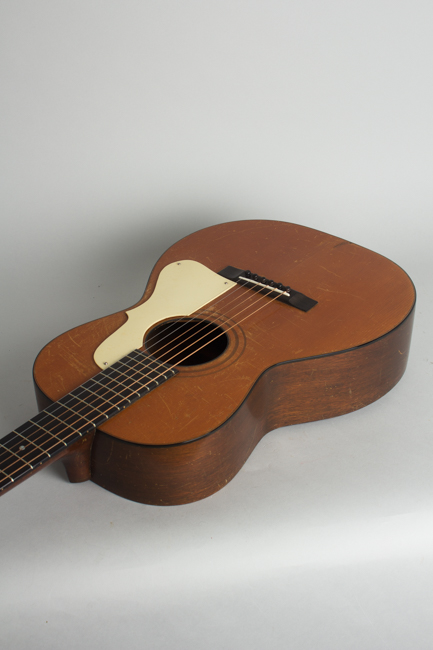 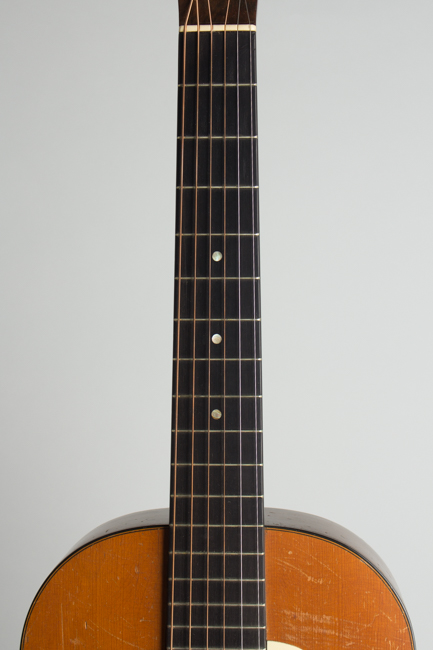 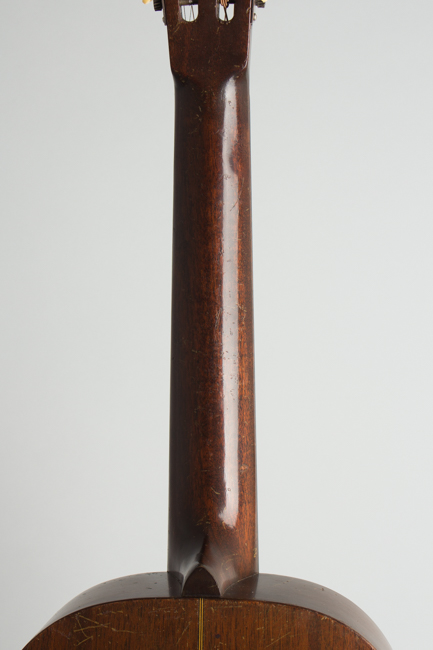 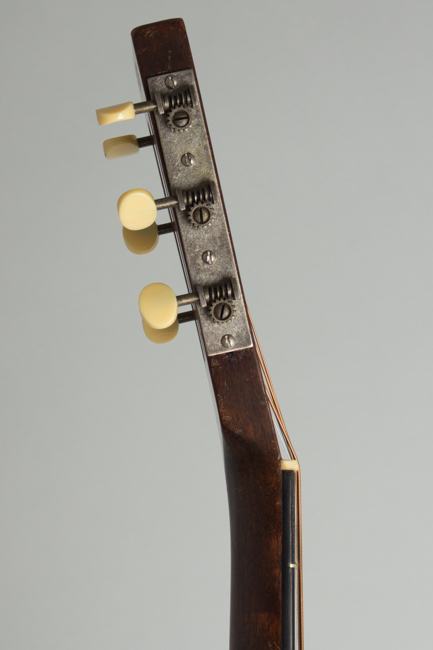 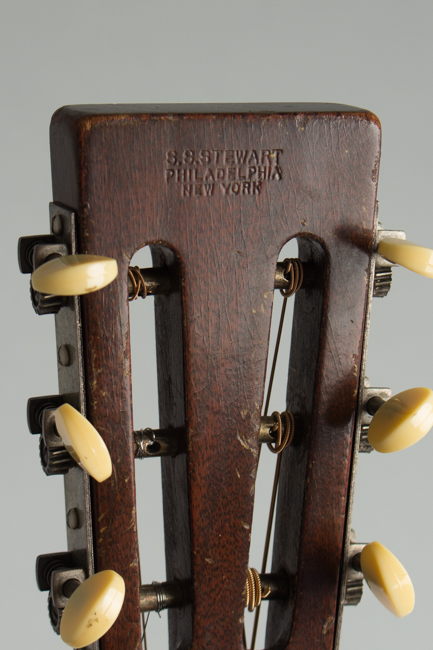 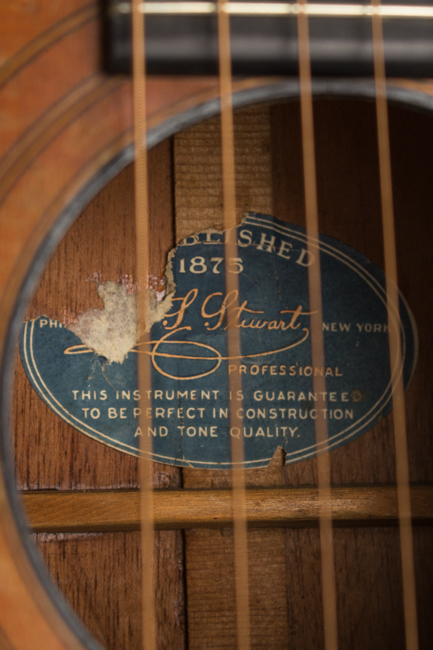 The S.S. Stewart name has bounced around quite a bit over the last 140 years. It originally belonged to one of the 19th century's most celebrated banjo makers, then became a generic marque passed along to others after his death. In the 1920s and '30s it belonged to New York wholesaler Bugeleisen & Jacobson, used as their top-line brand for the highest quality in-house product they offered. B & J had "Stewarts" made for them by a number of different firms, including, for a brief period, Gibson.

This Regal-made B & J Stewart Model A-4000 is a very well-made instrument for a pre-war jobber guitar, far above the standard of many. It appeared in B&J's 1930-31 catalog just as the Depression was starting to kick in, described as "Scientifically graduated and hand finished, producing a beautiful singing tone". The price was $25 in concert size; the comparable Martin 0-18 (which B & J also handled) was priced at $40.

The comparison to Martin is particularly relevant as this instrument is very similar to Regal's own "Custom Built" line, the Chicago company's direct early '30s challenge to Nazareth. Regal is mostly remembered as a maker of cheap instruments but they were perfectly capable of building excellent guitars, as they did for Bacon & Day. During the Depression, guitar makers were scrambling for a share of a very thin market. Regal, having just taken over the old Lyon & Healy factory, were in a position to up their game considerably. While they were not able to seriously threaten Martin's dominance, it did result in some of the best guitars to come out of Chicago in the 1930s.

The Model A-4000 was the lowest grade model in the Regal-built Stewart line, plain in ornamentation but well-built of quality materials and a good value at the price. It is an 0-sized, steel-string guitar with a neatly X-braced spruce top on a mahogany body, with plain black celluloid binding around the top and sound hole rim. The neck is one-piece mahogany with a nice dot-inlaid ebony fingerboard and Martin style bar frets, very unusual for a non-Nazareth instrument of this time. It has a fairly chunky profile with just a subtle hint of a "V" spine.

The slotted headstock has the Stewart name inlaid in pearl with a small pearl doodad underneath. A die stamp on the rear of the headstock reads "S.S. Stewart, Philadelphia New York" referencing both the brand's origins and current whereabouts. The number "4000" is ink-stamped on the neck block matching B & J's catalog designation. The internal blue oval label is missing the upper left quarter but is still mostly legible.

This guitar has an powerful and well-balanced sound for a smaller guitar, deeper and fuller than most similar jobber instruments. While perhaps not quite a sonic match for a 1930 Martin, it is a much better guitar than many other period instruments, and a really nice example of what the Regal company of Chicago could do when contracted to make a quality product. This is an excellent-playing and sounding authentic early-1930s period guitar, a fine choice for both period or more modern playing styles.

This old flat-top is cosmetically rather well-worn but structurally solid and a well-preserved instrument. It has some repairs but is very playable and maintains its original character. Externally there is a lot of wear, with numerous dings, dents, and scrapes over much of the finish. There is some fairly deep scratching to the top and back, but surprisingly few actual cracks. One small dink into the top caused a short grain split behind the bridge, and the lower back seam has been resealed; other than these, the instrument is crack-free.

The bridge is a more recent replacement, with finish missing from the top around its perimeter from previous bridge surgeries. There are signs of an old Stella style tailpiece having been installed, then removed, years ago. There is a pickguard screwed to the top, definitely period but probably not original to the guitar. It looks to have been installed when the guitar was fairly new. It can be removed if desired, leaving just three small screw holes.

Internally the guitar is quite clean, with the original X bracing and small bridgeplate intact with just a small reinforcing plate added over the bridge pin holes. The tuners are modern "relic" replacements in the original style. The bar frets and ebony fingerboard are in good shape and this is a very good playing guitar. The sound is not as complex as a similar Martin from this period but is full and punchy, and this is an excellent fingerstyle blues or fiddle band guitar. It includes a modern HSC. Overall Very Good + Condition.
×