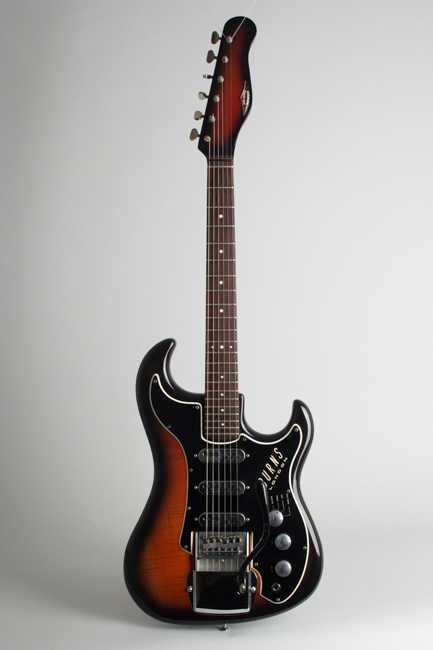 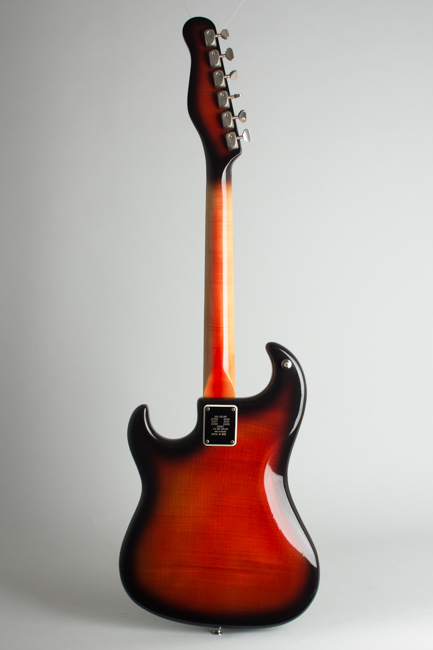 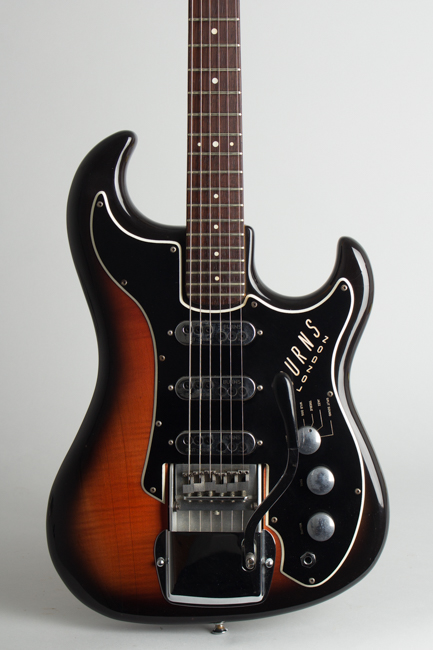 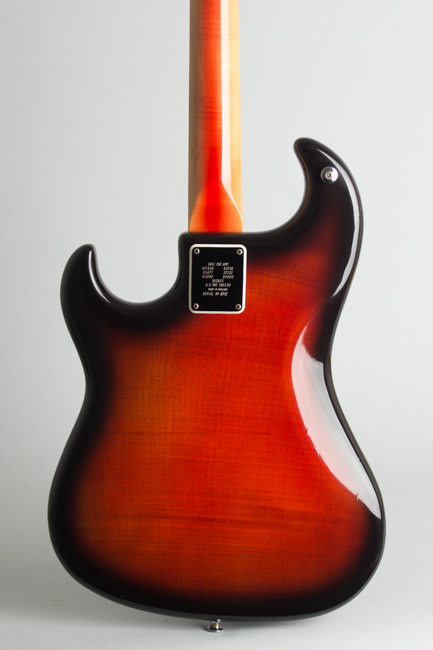 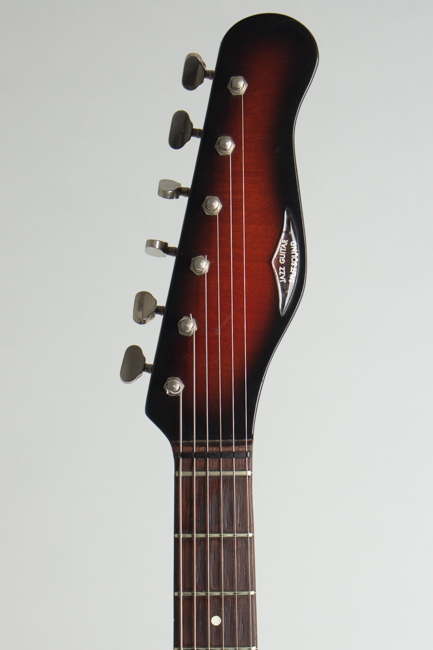 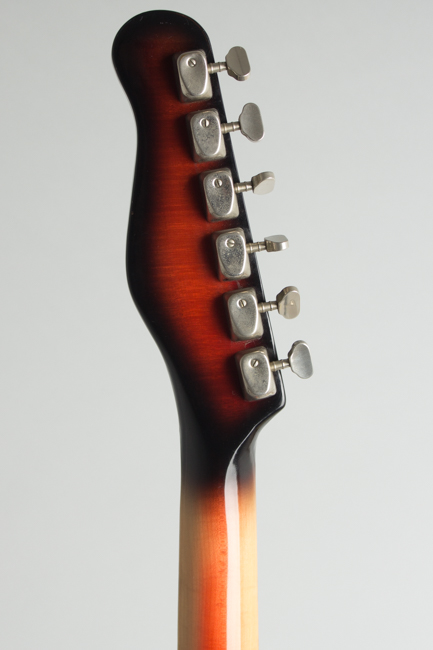 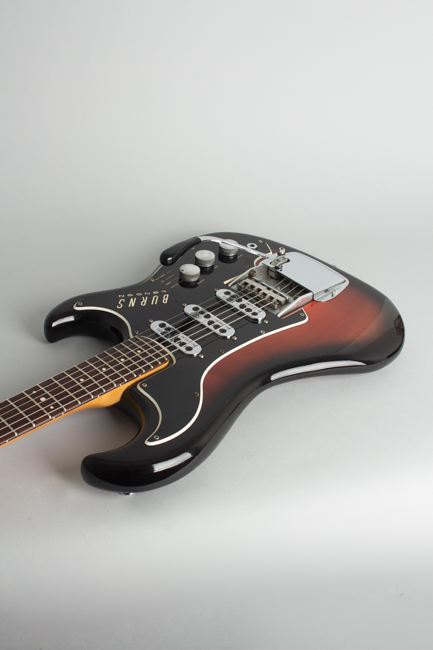 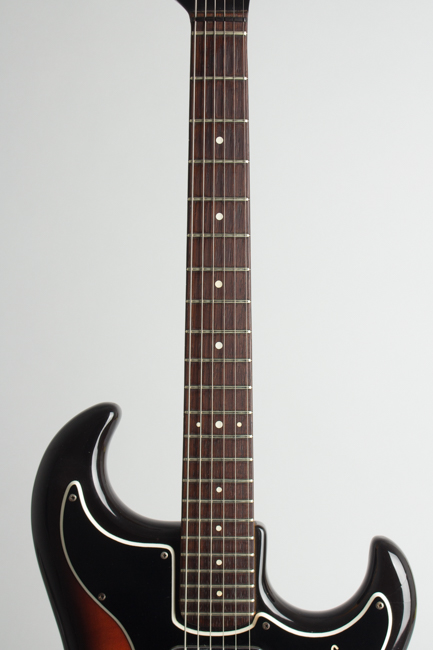 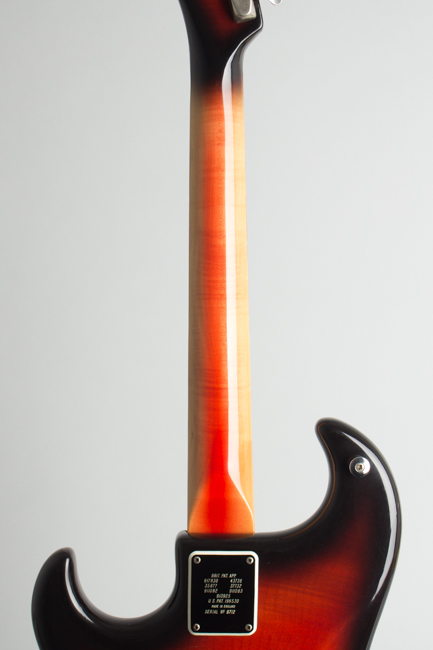 The Jazz Split Sound guitar was the most popular 1960s design from the always-eccentric James Ormston Burns, a relatively unsung Beat-Group era classic and a very stylish guitar. This model was available in the US labeled as both Ampeg (1963-4) and Baldwin (after late 1965) but this "true Burns" example, dated internally to early 1965, is something of a rarity on these shores. Burns instruments were sold worldwide under the company's name, but very few made it to the US due to the English firm's lack of a distributor in this market. The Jazz Split Sound was Burns' mid-price instrument; professional class but less expensive than the more dramatically styled Black Bison and Hank Marvin guitars at the top of the line.

Obviously owing a lot to the Stratocaster, the JSS has three "Split Sound" Tri-sonic pickups with a rotary control giving four tone selections including the snarlingly out-of-phase "Wild Dog" and the patented "Split Sound" which combines different half-coils to accentuate bass and treble registers. The lavish Burns "Series II" vibrato system incorporates a floating bridge cradle that moves laterally and individual saddles and must rate as one of the best systems of its kind.

The sunburst-finished 23 1/2 inch-scale neck is slim and comfortable with a slightly less round feel than a Fender and a sunburst single sided headstock, later changed by Baldwin to a natural finish double-sided design. The red-black sunburst finish was standard for this model; this one has faded a bit, but exhibit less heavy checking than often seen on these UK-made guitars and has a bit of nice grain to the sycamore on the back. All the instruments from the Burns London period (1961-65) are extremely well-made, and this rates as a fine-playing guitar with tons of character and a very distinctive sound.

This is a superb, clean and original example of this guitar with only some very light wear and no alterations. The sunburst finish has faded a just bit, but retains more of the original color than many; this one has more of an orangey-red hue than most. The finish has a few small dings and scuffs, but only some minor checking lines...far less than are often present on English polyester from this period. There are a few very small dents to the finish on the back of the neck in the lower position that can be felt.

The guitar is complete and remains all original including the nearly always missing trem arm and tailpiece cover. This is an excellent-playing and sounding example of this rare-in-America version of Jim Burns' most popular instrument, just about the nicest of this model we have had. A modern hard case is included. Excellent + Condition.
×