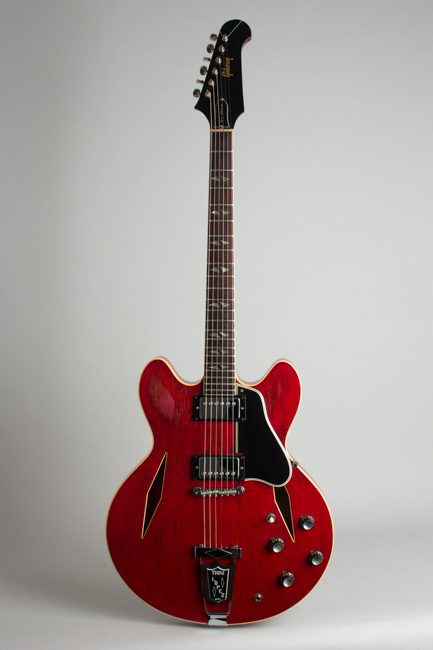 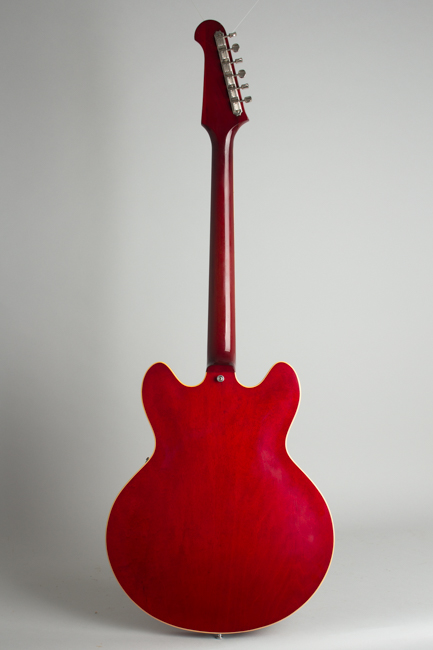 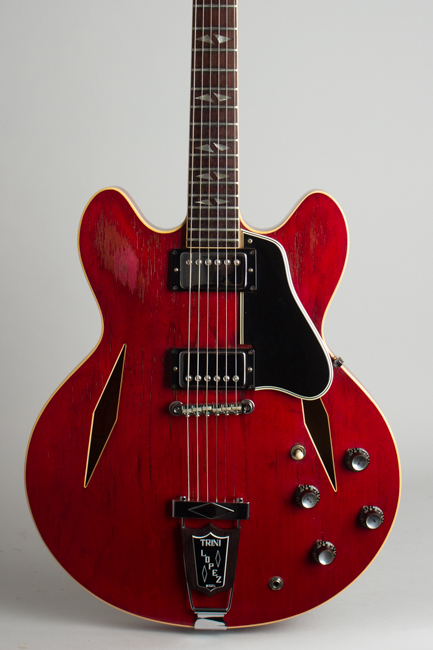 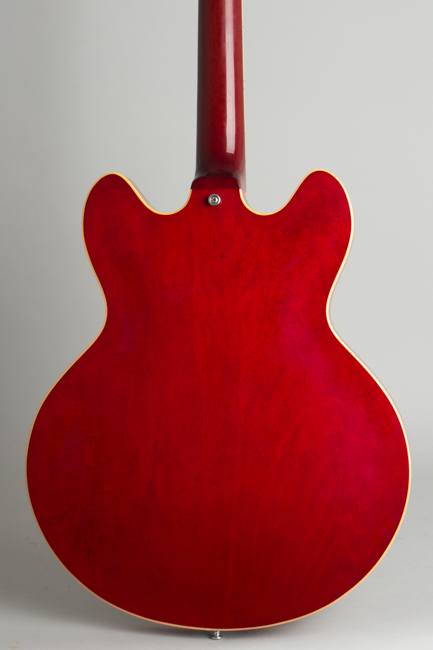 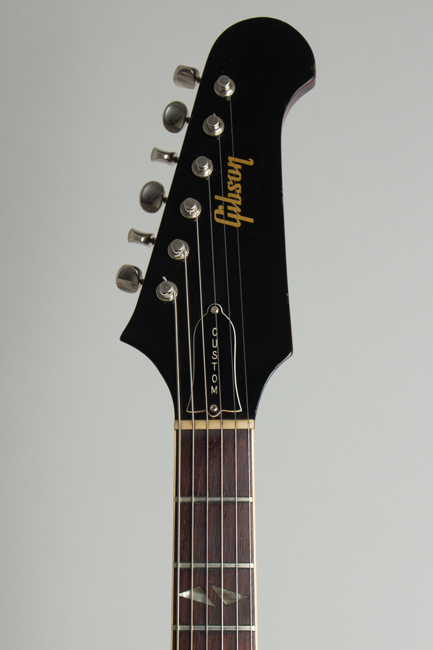 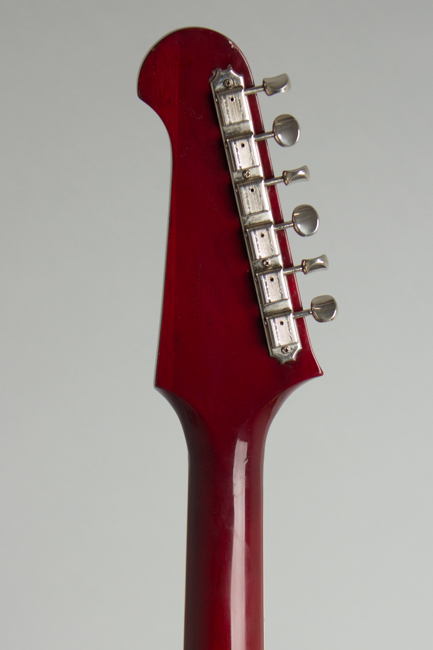 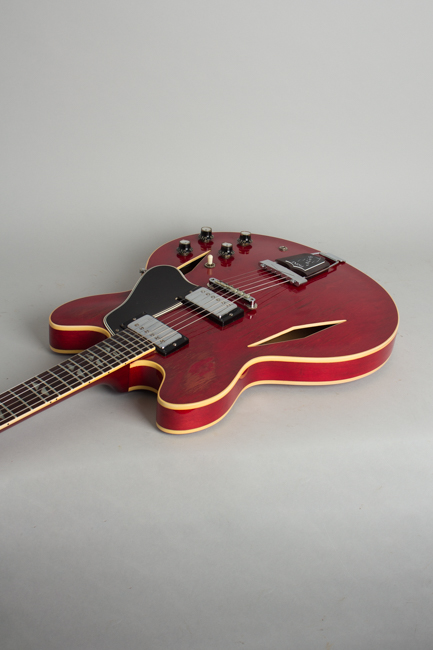 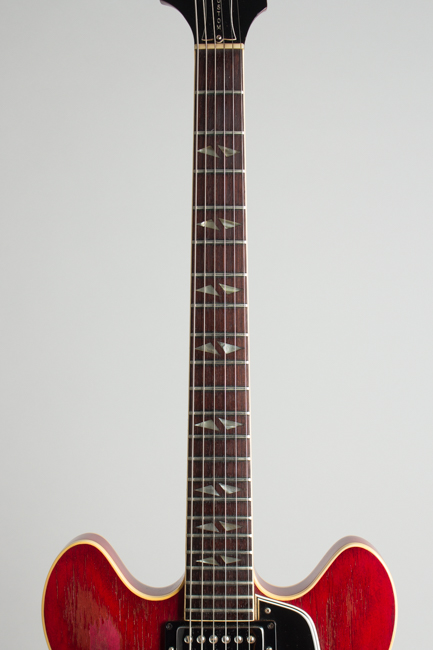 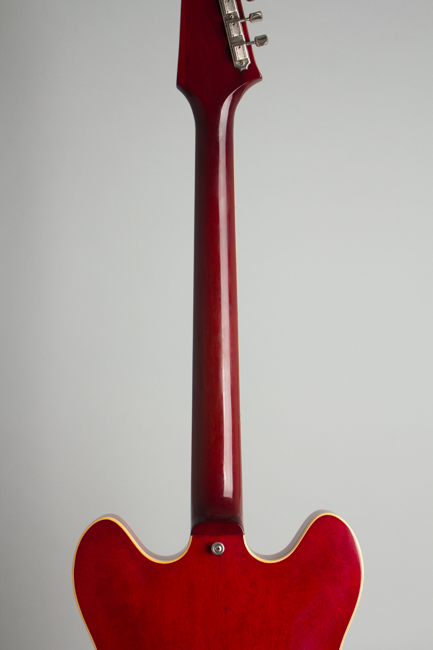 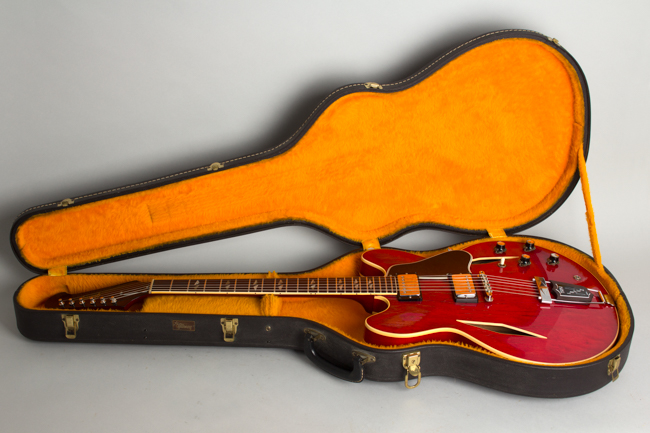 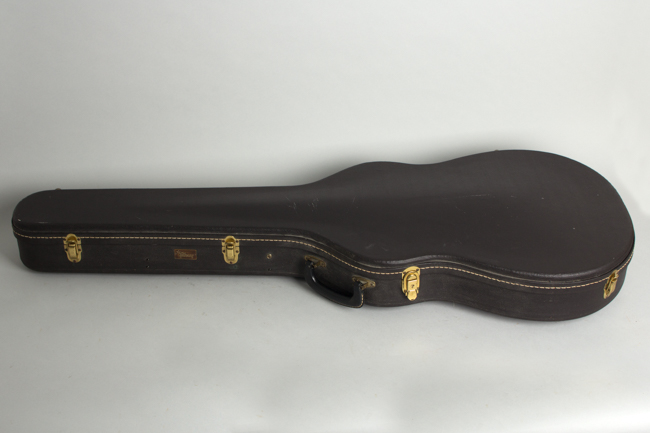 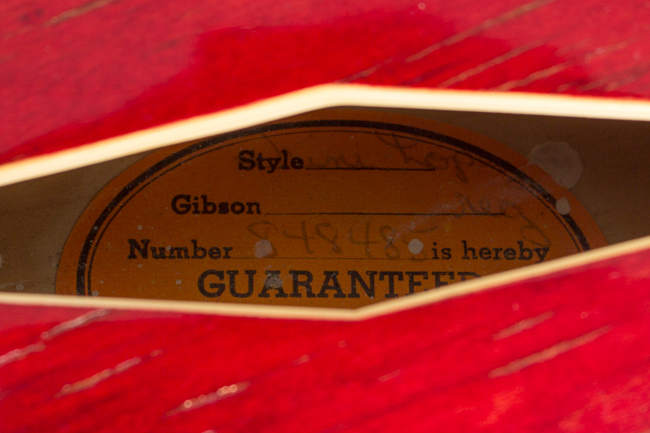 One of our favorite '60s Gibsons, the Trini Lopez Standard adds a slightly sassy cosmetic edge to the more common cherry red ES-335! The diamond shaped f-holes and position markers give the guitar a rakish air, while the single-sided headstock contributes a certain extra pizzazz. A snazzy engraved rosewood-and-plastic tailpiece insert carries the "Trini Lopez Model" designation, with a couple of extra diamonds. While these guitars are usually referred to as having a "Firebird Style" headstock, this model in fact slightly predates the non-reverse Firebird guitars it shares that design with, so really the later Firebirds have a "Trini head".

This example has features typical for 1966 including chrome-plated hardware, nylon Tune-O-Matic saddles, enclosed strip Kluson tuners and the "silver capped" clear plastic knobs that were about to be replaced with the less appealing "amp"-style black molded knobs. The pickups are the same chrome-plated Patent Number Humbuckers used by the entire ES-335 family, with the same wiring rig. Even though nominally the "Standard" model this example has a "Custom" engraved original truss rod cover, a part Gibson sometimes seems to have used on a number of "Non-Custom" instruments around 1966-68. This was the era of that sort of thing; they probably had too many of them laying around the factory.

"Mr. Lemon Tree" himself seems to have never played this model, generally preferring his "Trini Lopez Deluxe" based on the fully hollow Barney Kessel model. In recent years this once derided Gibson has become a much sought after instrument, especially as favored by Foo Fighter Dave Grohl. While not unusually rare, the Trini Lopez standard shipped only 485 examples in 1966, compared to over 2500 ES-335's. Then as now, Trini Lopez Standard remains the most colorful and distinctive of Gibson's semi-hollow-body family, a visually striking guitar as well as a typically fine playing instrument.

This is a nicely original guitar, mostly well cared for if at one point apparently heavily played. The bulk of the finish is very clean with a rich unfaded cherry hue, but the lacquer on the top shows some heavier checking lines, and there is one spot worn through the finish on the upper body horn. It looks as if the original owner played with their arm resting there, and so the sort of sweated-through wear spot usually found on the upper bass bout is located here instead.

Other than this play wear to the top the guitar is quite clean, and shows remarkably little in the way of other finish wear. All hardware is original and stock, except possibly the logo block on the tailpiece, which may be a repro and the "factory upgraded" truss rod cover as noted. The frets look to have been crowned down a bit and show some minor wear, but the guitar plays very well. Apart from its slightly eccentric top wear pattern this is one of the nicer "Trinis" we have had, still housed in the original yellow-lined Gibson HAC. Overall Excellent - Condition.
×