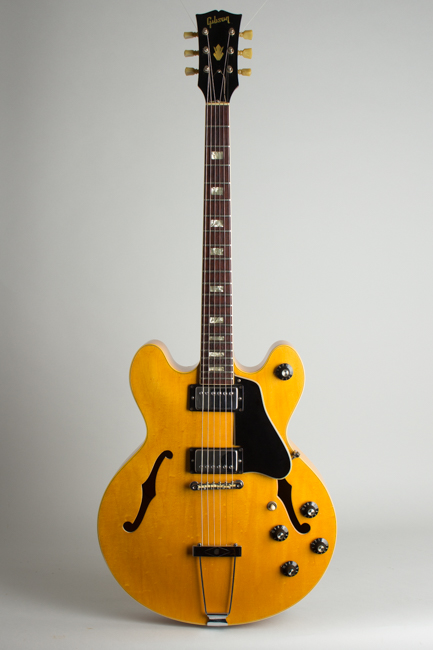 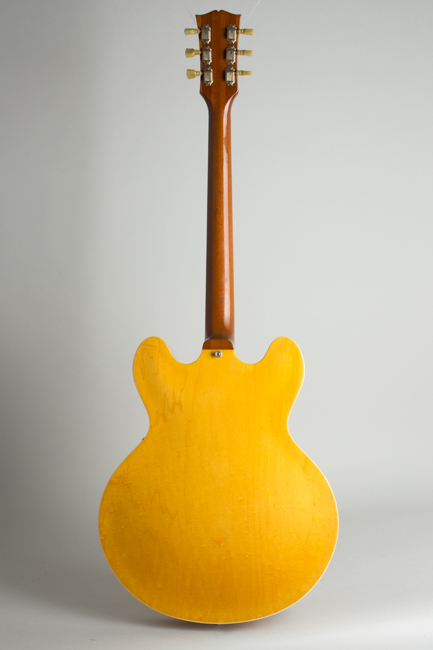 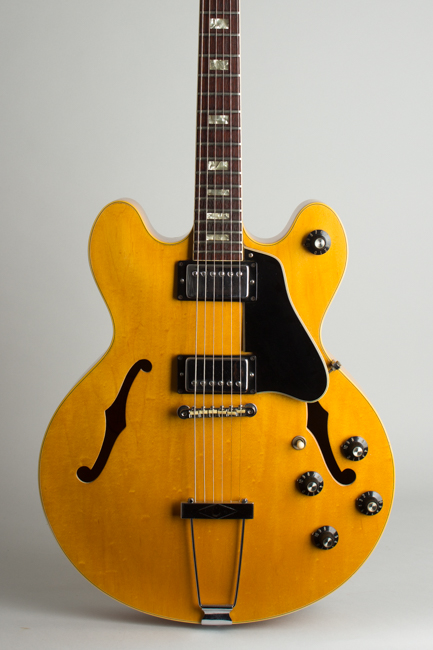 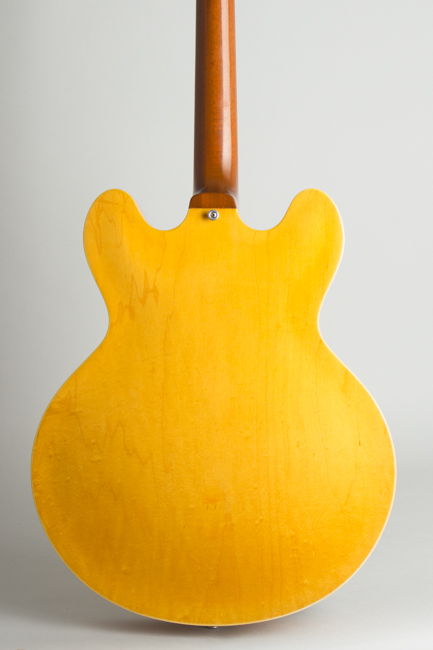 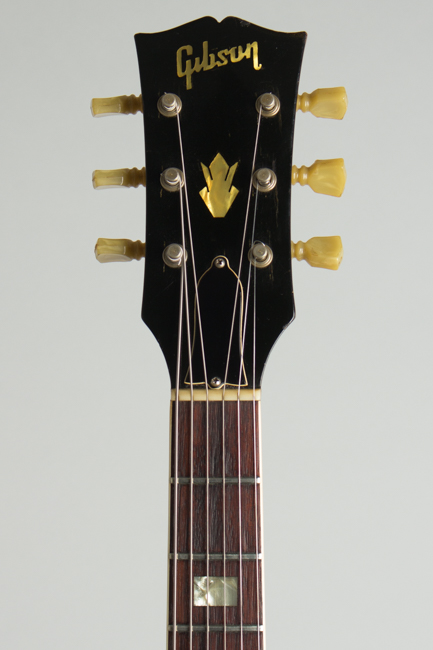 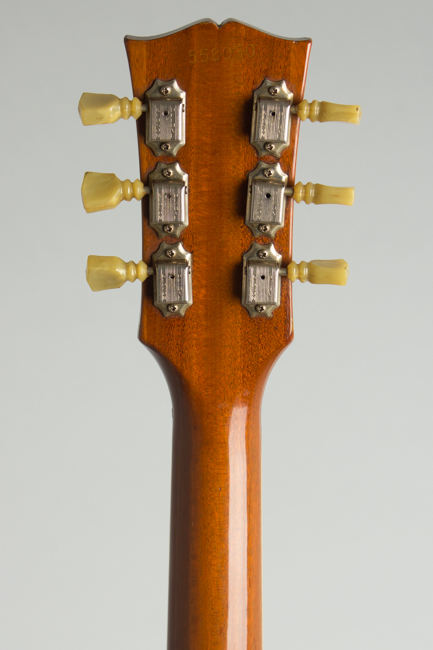 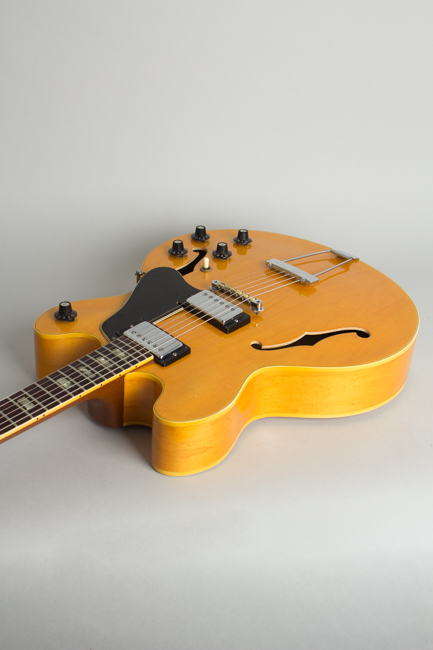 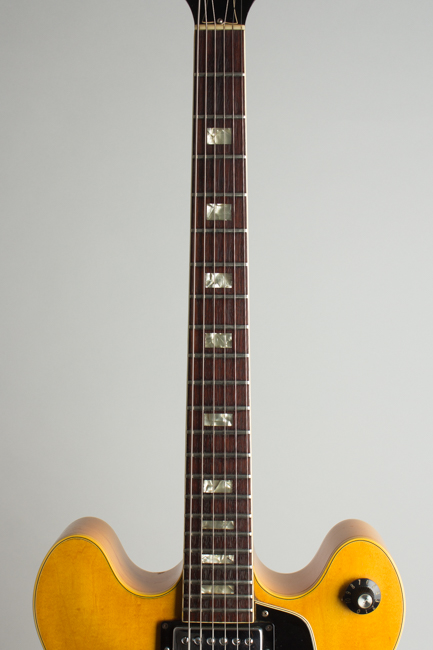 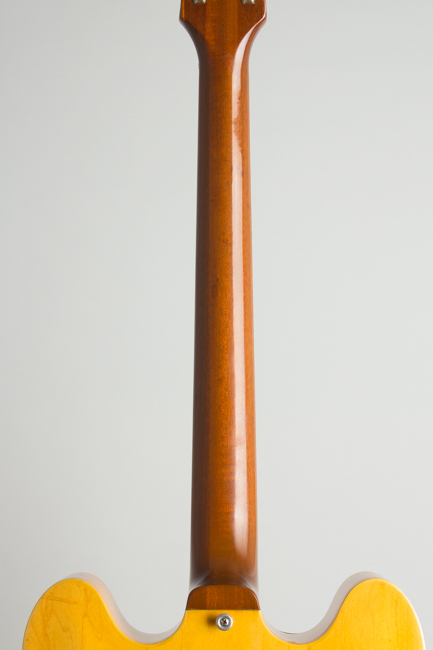 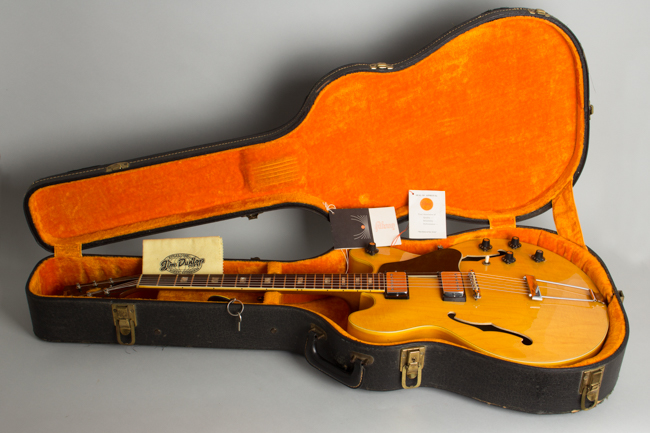 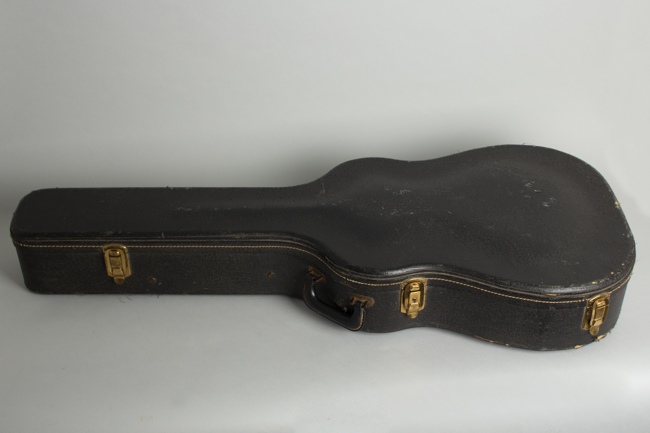 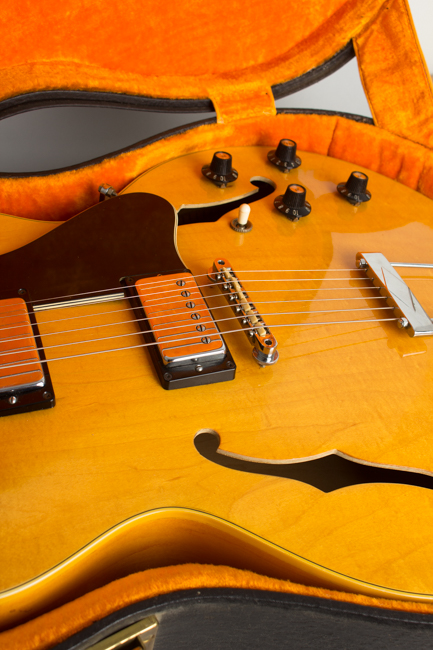 One of Gibson's more interesting ideas from the end of the '60's, the ES-150DC used a recycled model number for a new hybrid guitar -- a full-body variant on the ES-335 series. This first-year natural-finish example from 1969 has features specific to that year: the narrow one-piece mahogany neck has no volute or "Made In USA" stamp, both of which would appear over the next year or so. The hardware is chrome including the covers on the patent # pickups, the tailpiece and the Tune-O-Matic bridge which has nylon saddles. The knobs are the "witch hat" amp-style pieces typical of the period. The double-ring tulip button tuners still have "Kluson Deluxe" stamped on the cases; the next year or so this would be changed to "Gibson Deluxe".

While it much resembles an ES-335 from the front, the ES-150D is structurally a very different instrument with a hollow 3" deep body and no solid center block. There is a substantial internal block extending from the neck almost to the rear pickup, but not all the way back beyond as in the ES-335, which would have made for a very heavy guitar. The tone is more in the range of an ES-175, and the guitar handles in a similar way to the other full-depth hollow guitars. The instrument also has a master volume control on the lower horn, an unusual and useful feature Gibson rarely used on stock models.

This fairly rare guitar was produced in far smaller numbers than the rest of the ES-335 thinline family. The production run lasted just a few years starting in 1969 running into the mid- 70's before piddling out. The ES-150DC did not prove a big seller despite a very practical design and excellent sound. Only 95 natural finish examples were made in this first year and the total for the entire production run is just over 500 in blonde. This 1969 model remains in lovely original condition and is also a fine player's instrument, an interesting and cool variation on one of Gibson's classic formulas.

Overall this is a very nice original example showing some light general wear but no notable repairs or modifications. The finish shows some typical minor chips, dings and scrapes, the most concentrated area being a bit of belt-buckling into but not through the finish on the back. There is a bit of incipient flaking on the headstock around the tuner bushings, but this is extremely minor.

The only repair to the instrument is a metal Les Paul style jackplate added over what is likely a small crack through the jack area. The original frets look to have been crowned down just a bit and this is an excellent player, with a very lively sound. The original 60's style gold-lined black case is also well preserved, and the original unreturned warranty cards are still inside. A really cool example of this oft-forgotten Gibson experiment that deserves to be better remembered. Excellent Condition.
×