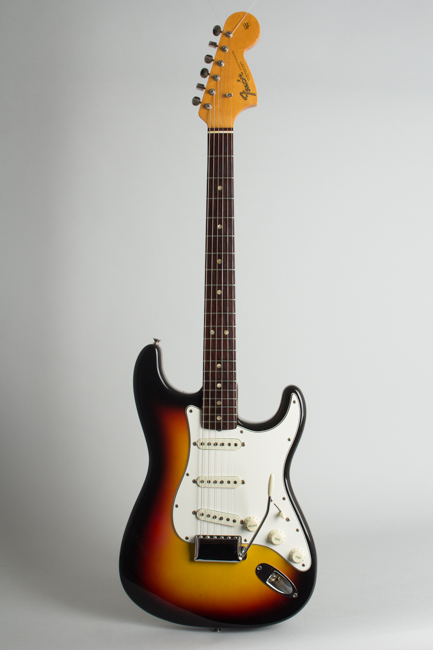 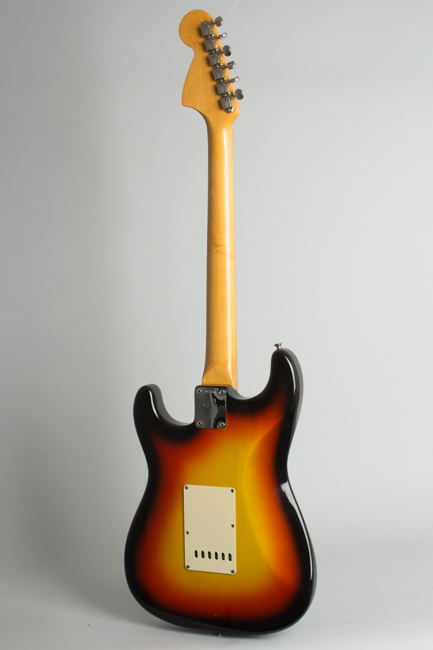 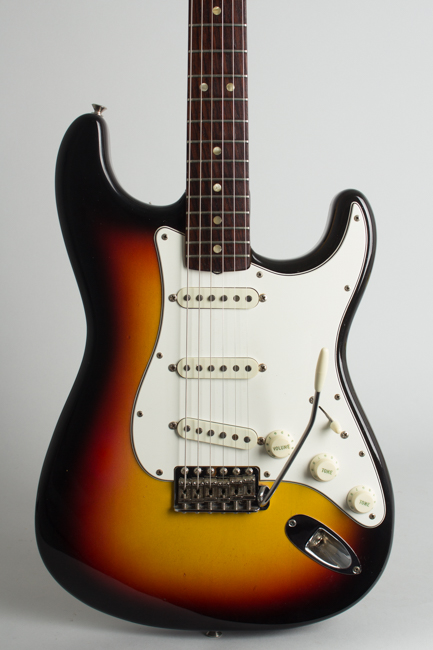 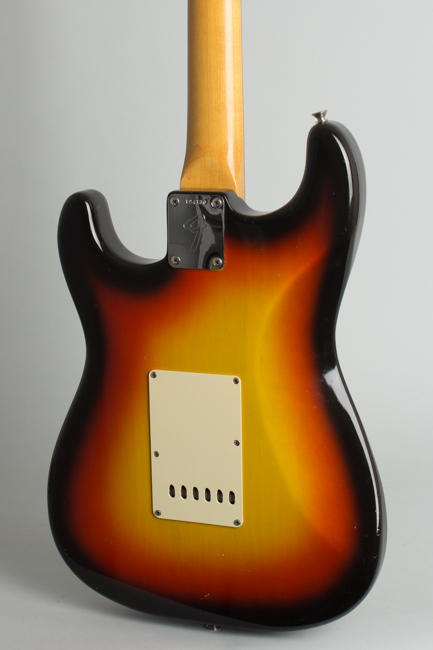 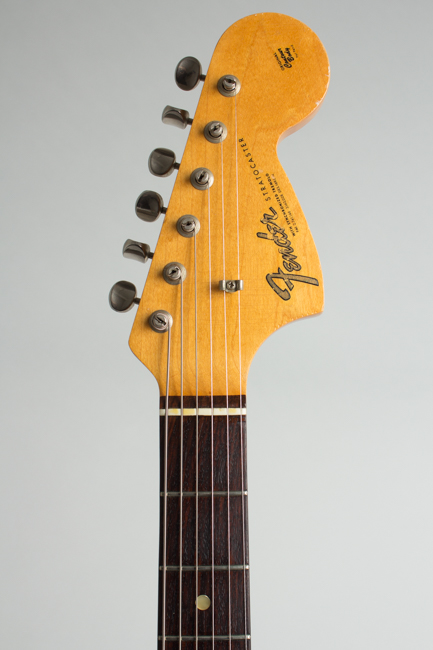 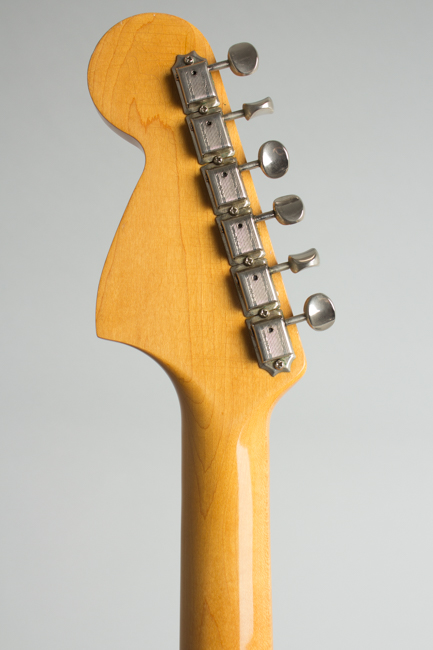 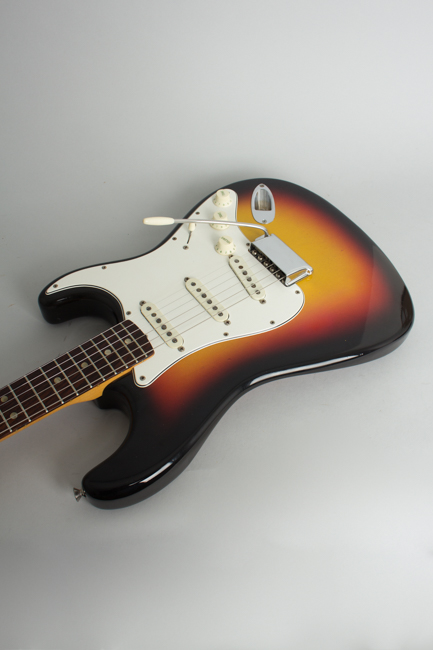 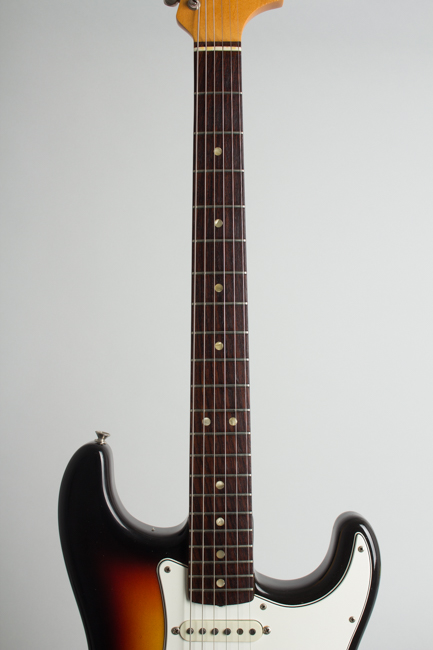 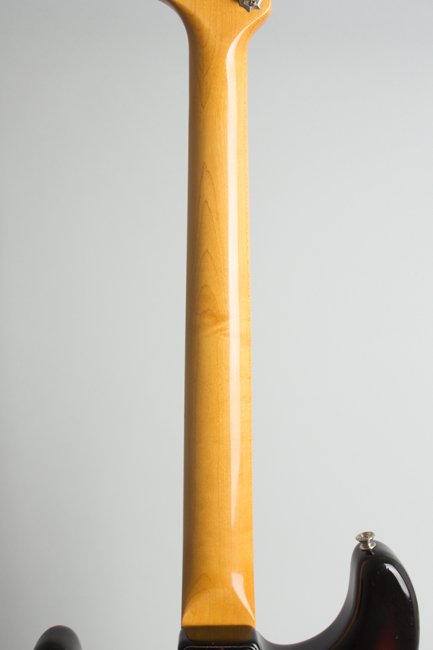 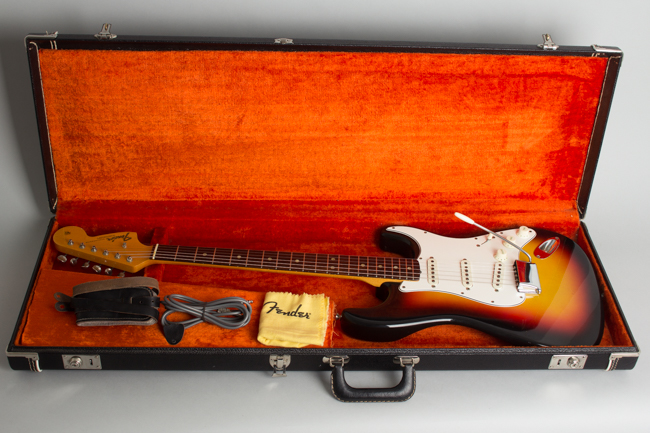 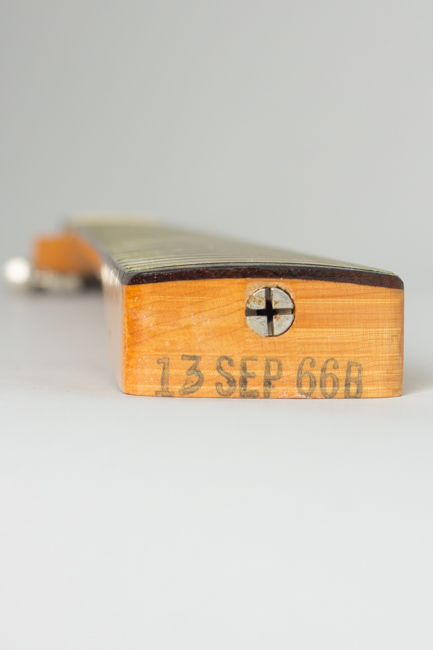 Hold the presses! In the 2020s these don't just walk in anymore! This is a truly superb and completely original example of a "transition" early-CBS era Stratocaster, with some VERY light wear but looking original, unmodified, and very little used. This Strat was assembled right at the end of 1966; maybe somebody got it for Christmas this year, or more likely it shipped out in early '67. It seems to have mostly sat unused since; the 1960s' loss is our gain!

This guitar shows typical features for 1966, with some small but notable differences from 1965 and earlier models. The neck is stamped 13 SEP 66B and features the new-for-'66 larger headstock with the gold "transition" logo; supposedly this was re-designed at CBS' behest to make the headstock and logo show better on TV, but that may be a Fender fable. The dots in the thin-lam rosewood fingerboard are pearloid, as they had been since early '65. The finish is still the early style thin lacquer; the next year CBS would begin experimenting with harder coatings culminating in the infamous "thick skin" polyester of the 1970s.

The neckplate carries a large "F" stamped under the serial number, added in late 1965 when the 100,000 number series commenced. The pickguard is made of white ABS plastic, mounted over the scrap aluminum shielding plate used since 1959. The pickups are a nicely matched grey-bobbin set clear dated 12-19-66 on the neck one and 12-16-66 on the bridge. The masking tape on the leads and the internal solder joints are all intact and untouched. The pots are a matched set dated to the 18th week of 1966. All internal wiring is the original cloth-covered type; less than 2 years later, this would be replaced with thinned plastic-coated wire.

Other hardware is consistent with Pre-CBS instruments; steel stamped bridge saddles and trem block, and the Kluson tuners CBS would replace the next year with their own in-house "F" plate machines. The weight is typical for this period at 7.73 Lbs. While PRE-CBS has been a watchword for Fender afficionados for decades, this early-CBS Stratocaster is simply a great-feeling and sounding guitar, a far cry from what the instrument would evolve into a couple of years down the line. This one has a super 1966-7 vibe; while Pete Townshend and Jimi Hendrix were taking '60s Strats and sacrificing them for immortality, it has spent the last half-century mostly sitting in its case, waiting for a chance to shine!

This Strat is not mint, but it is certainly one of the better preserved examples we have seen in a long time. It really just does not look to have been played much, or even taken out of the case a whole lot. The finish has virtually no fade at all; the colors are as bright as when it left Fullerton well over a half-century ago. This one never hung in the dealer window!

The headstock shows some lacquer checking but there is virtually none on the body. There are small dings, scuffs, and dents here and there, but very little that actually went through the finish, except for a couple of tiny chips by the plate where someone (before us!) removed the neck. Even the common chips on the lower body edge from being banged around in the case are at a minimum, with just a few small dinks that have been carefully touched up.

As far as we can tell we were the first ones to remove the pickguard and peer inside since it was screwed down at Fender, and yes we put all the screws back in their exact original holes. All wiring is original and untouched, even the masking tape wrapped around the pickup leads is fully intact. All hardware on the guitar is correct, complete, and original; the ONLY alteration is that somebody enlarged the holes in the backplate just a bit to make re-stringing easier. They later bought a new aftermarket backplate, but it still rests in the case having never been mounted on the guitar. The bridge saddles have some typical minor corrosion; the screws and springs are all very clean.

The back of the neck has basically no finish wear. The original frets show no notable wear either; they may have been crowned down a touch flatter than usual a bit later on or it could just be slightly rushed work from the overburdened CBS/Fender crew. The only really notable cosmetic flaw on the instrument is the decal is showing some greening to the gold and small flakes have fallen away; this is not uncommon on mid-'60s Fenders and may be the reason CBS started having them lacquer over the decals not too long after.

This Strat has survived a lot of time and tide without being much the worse for wear. It is clean enough to ogle, but has just enough wear to be inviting to play without fear. It rewards the player with a sound mostly locked away for a half-century; full, bright, and "Stratty" in the classic way without ever turning brittle or thin. Every position on the switch (which is of course the original 3-way but neatly holds the "in between" settings) offers a new slice of classic Stratocaster goodness. This looks like it would have sitting in a pawnshop in 1967 or '68, just used enough to start breaking it in. The original black Tolex hardshell case is clean enough that it looks like a re-issue from afar, and there is an original cable and strap still in the pocket. Excellent + Condition.
×