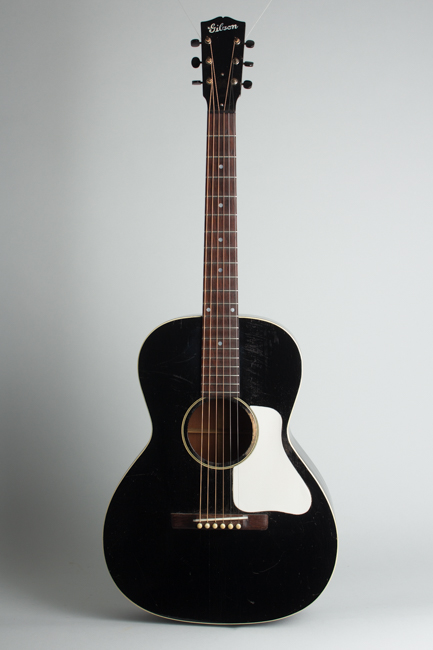 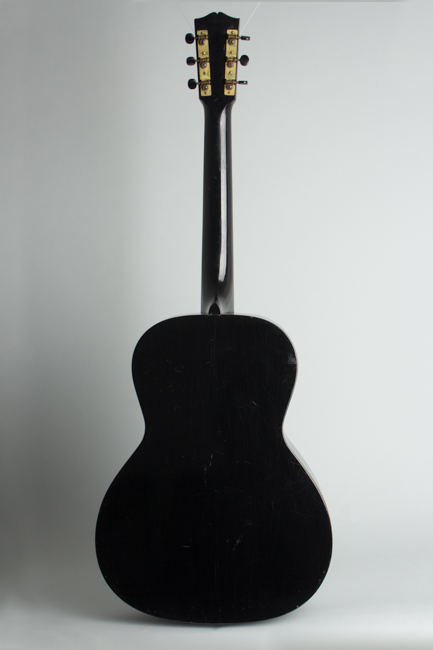 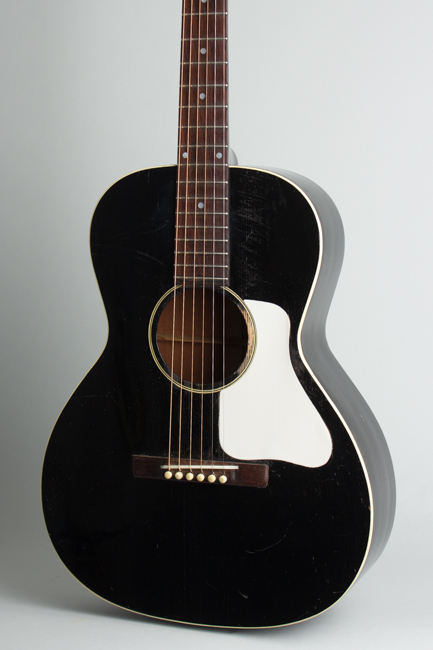 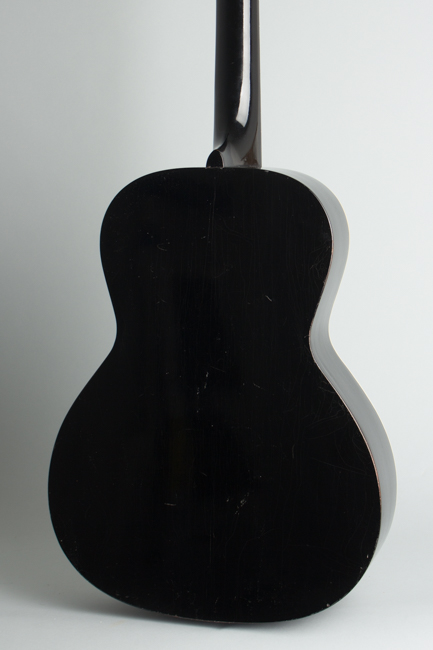 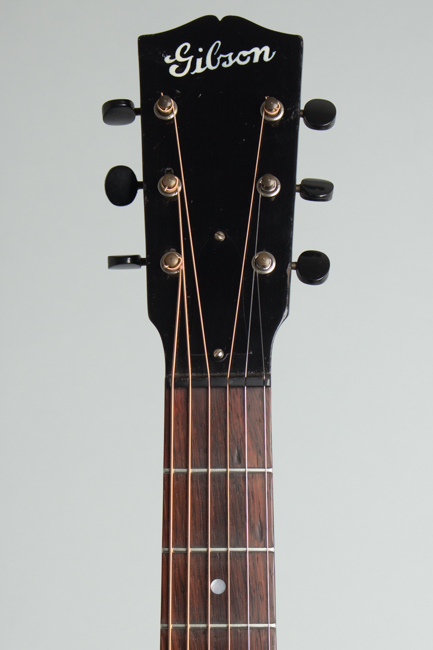 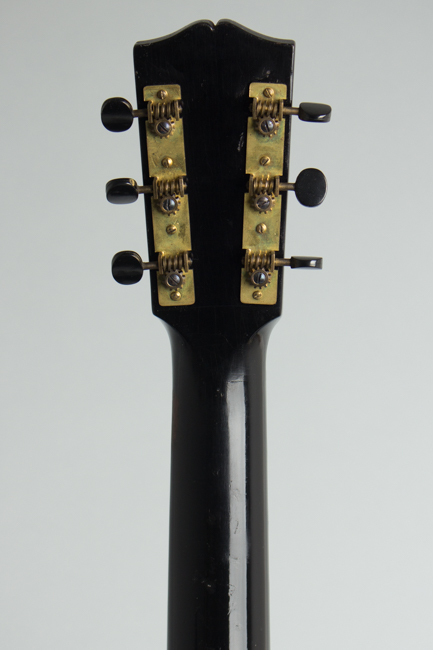 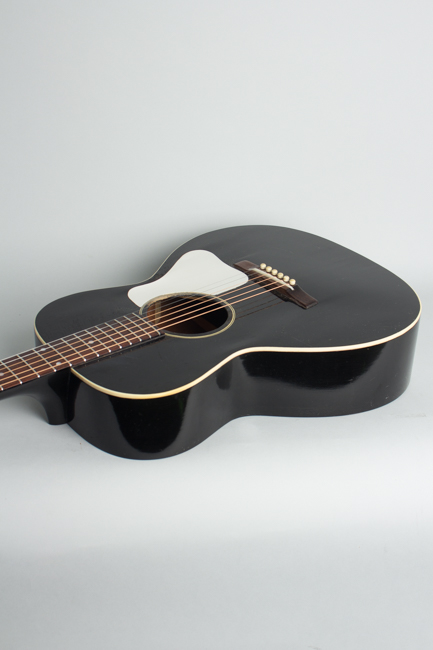 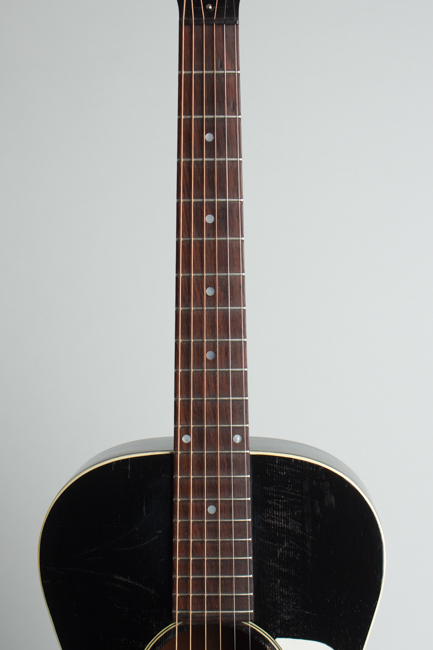 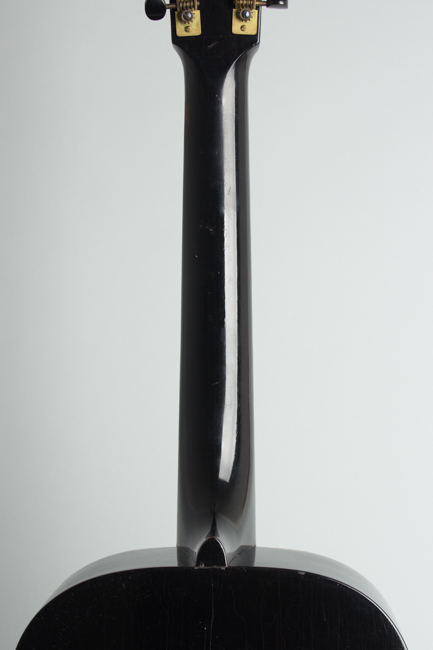 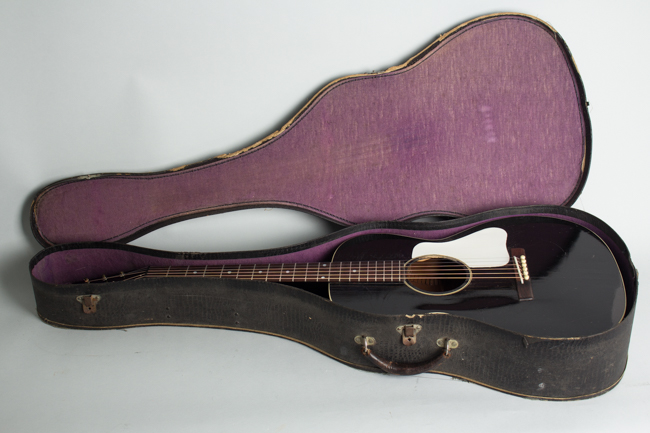 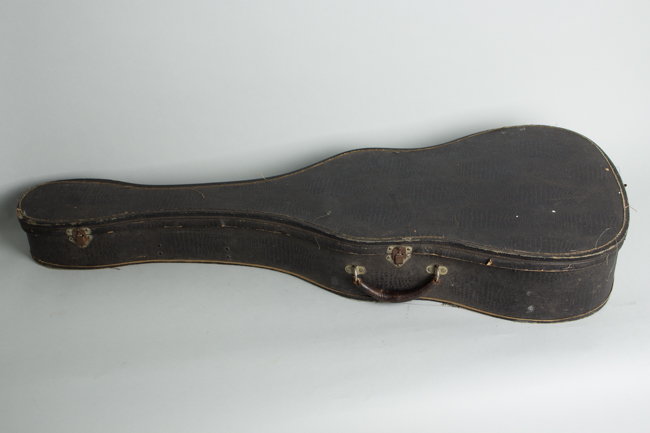 This is a very nice example of the early 12-fret version of Gibson's classic L-00 model, in an overall black lacquer finish with a fairly rare white celluloid pickguard. The L-00 was a depression-era staple for Gibson, offered this year at the rock-bottom price of $25.00. This was as cheap as a Gibson ever got and helped the company survive that lowest point of the depression, when even that amount of money was hard to come by for many Americans. This one would be one of the later 12-fret body L-00's, made not too long before the instrument was re-designed into the more familiar 14-fret version sold up until WWII.

This is a very plainly-ornamented guitar with only a white script "Gibson" logo, single bound top and 3-ply soundhole ring for decoration. The unplated brass strip tuners with black plastic buttons were the simplest that could be had. In spite of this cosmetic economy the black-and-white scheme gives the instrument a very striking "tuxedo" look. The very light spruce top is braced in a delicate X pattern, which would be beefed up somewhat on later 1930s examples. The neck has a fairly slim round-backed profile, not the heavy "V" Gibson was soon to employ on their lower end flat tops through the 1930's. To most modern guitarists this neck is considerably more comfortable to play.

As a model the L-00 went through numerous design changes over a short period in the early 1930's. This is usually our favorite version, an exceptionally light and responsive guitar, really sharp looking and a fabulous fingerpicker. This is the second example we have found from batch #250 and both have proved extremely fine guitars. This one shows some wear but is more original and better preserved than many and sounds fabulous.

This guitar remains nicely original with some general wear and typical maintenance repairs to keep it playing for another 80 or so years. Cosmetically there are a number of pick scratches in the top above and below the fingerboard, with some fairly heavy localized wear to the wood just below the strings on the soundhole rim and under the pickguard at the waist. There is one tightly repaired grain split on the top running back from the bridge to the back edge, just behind the A string. Amazingly the instrument does not show any other cracks, which is fairly unusual for these very lightly built guitars. The top is slightly bellied behind the bridge, but completely solid; this is again common on this model.

The rosewood bridge is original including the original pins; it appears to have been lowered just a wee bit on the treble side. The bone saddle is newer. Internally the guitar is also very original; original small maple bridgeplate is still intact as are all the rather delicate braces. It looks like a couple of the top braces have been reglued, which again is typical for these. The neck has been reset, the fingerboard trued and refretted with correct style wire; the ebony nut remains original. This fairly rare guitar is better preserved than many early L-00's, extremely playable with a lot of volume for a smaller instrument and a fantastically responsive sound. Excellent - Condition.
×