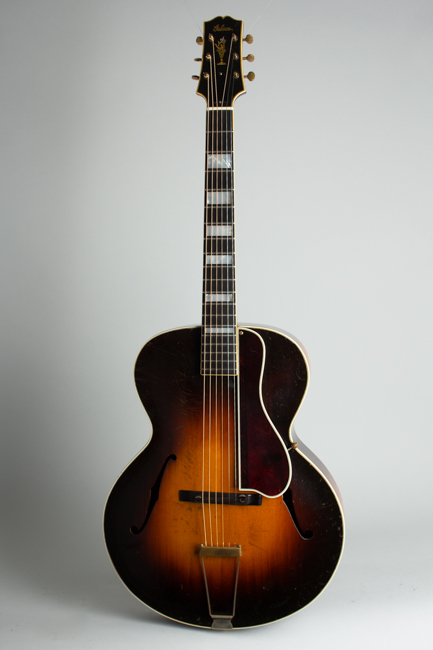 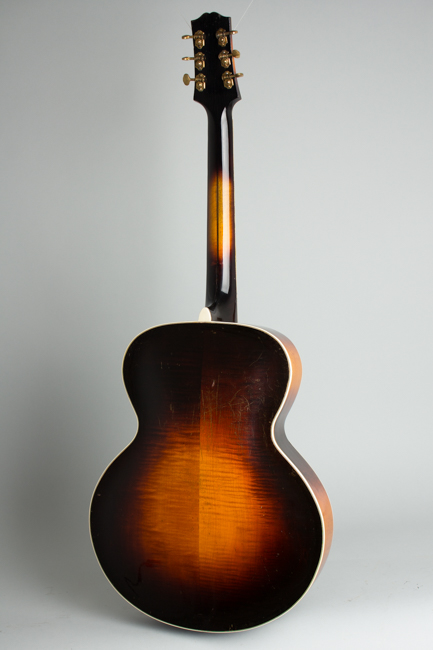 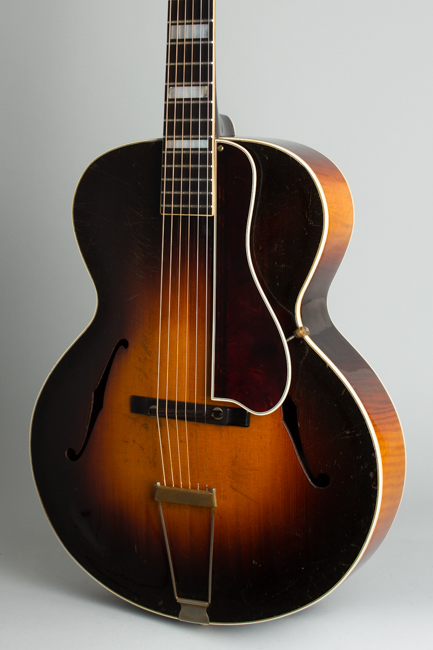 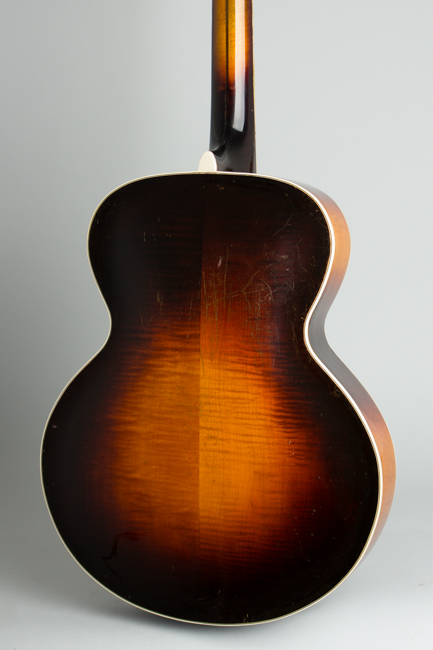 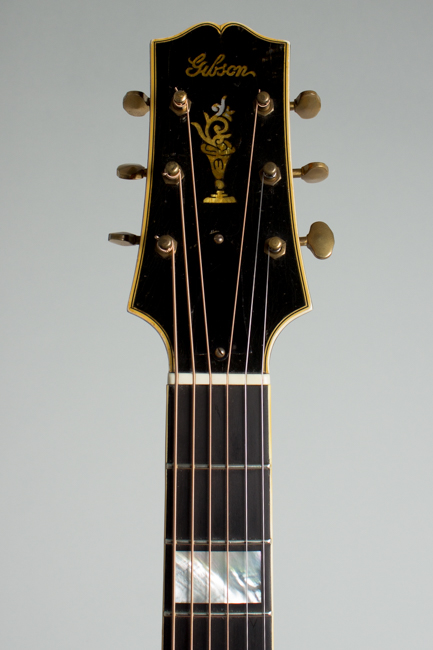 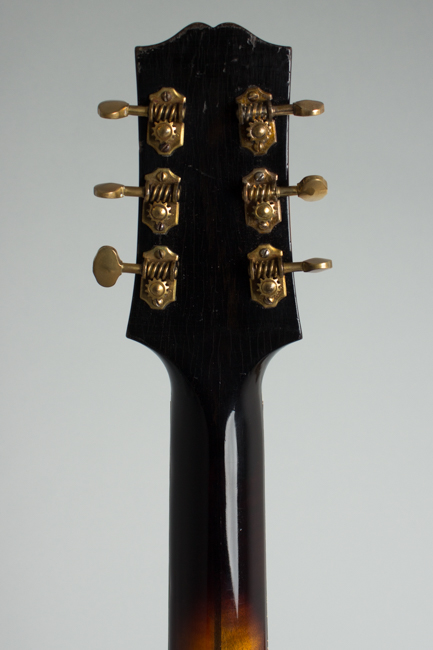 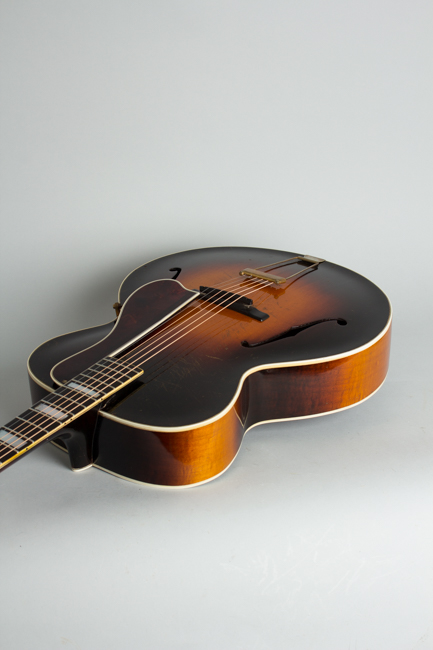 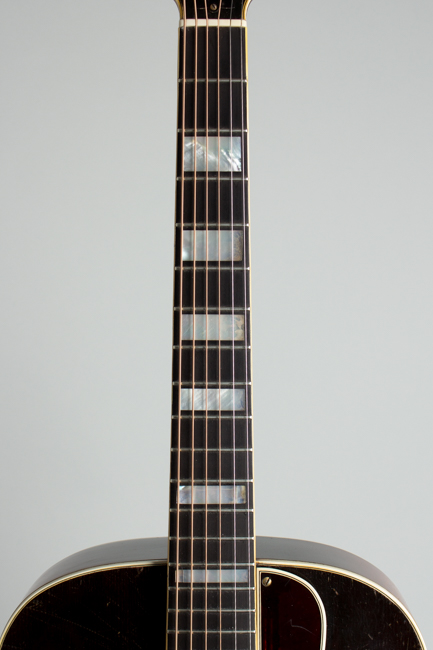 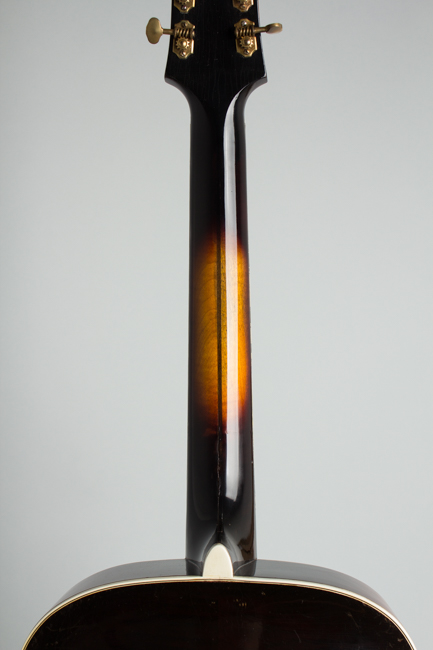 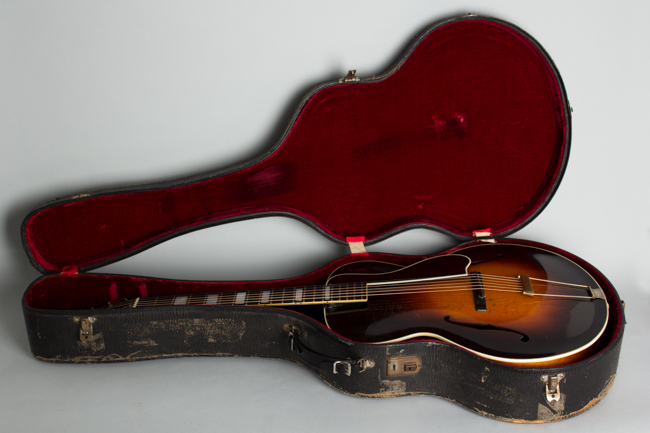 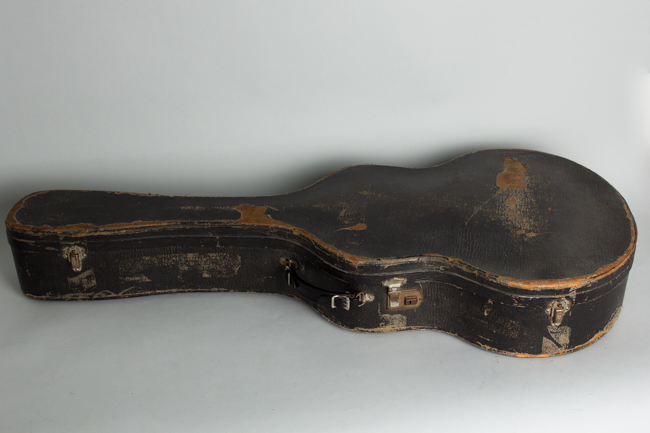 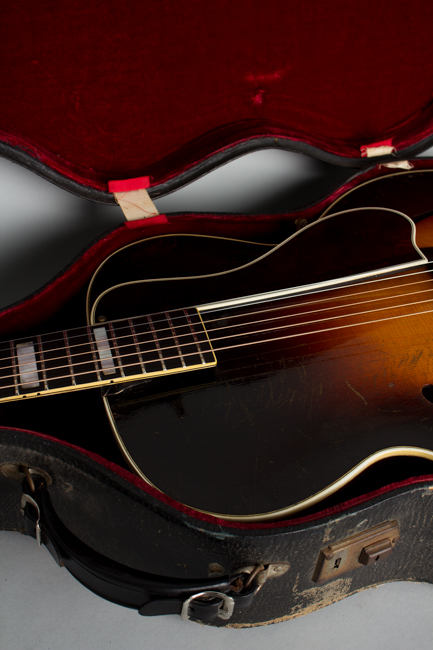 This 1935 L-5 is a fine example of the pre-eminent orchestra guitar of its era -- the original f-hole carved top guitar -- and an extremely fine-sounding instrument by any standard. Debuting in 1923-4, the L-5 was the first modern F-hole archtop, with a design still widely copied today. At the time this one was built just over ten years later it was still the top of Gibson's line and considered by most players the finest guitar orchestra made.

By 1935 dance and jazz band banjoists had almost universally converted to guitar; the L-5 along with Epiphone's competing Deluxe were the choice of nearly all top professional guitar players. Eddie Lang, the era's most influential guitarist, switched from a Gibson L-4 to a dot-neck (probably 1927) L-5, then to an early block neck L-5 around 1930, setting the trend for all to follow. From that time on the L-5 ruled the roost for orchestra guitars, giving Gibson a dominance in this style of instrument they never really lost.

That said, these early 16" L-5s are fairly rare guitars today. Retailing at $275.00 (plus case), the L-5 was an extremely expensive instrument for the time (the top-of-the-line Martin pearl-trimmed Style 0M-45 retailed at $100.00 less). At the height of the Depression, only working professional users with steady salaries could afford the indulgence of such an instrument.

Most of these original 1930s L-5s were played extensively for many years, some owners continuing to prefer them to any other guitars. They can be seen in the hands of recording studio players well into the 1960s. As constant working guitars, these instruments were often modified, refitted, or refinished with little regard for originality. This example is unusually well preserved showing signs of use but no major modifications and remains in delightfully original condition.

This guitar shows typical features for the mid 1930s; the transitions between variants of the 16" L-5 is inexact at best. Referencing both the serial number and factory order number, it was likely built around the end of 1934 and shipped in mid-1935. At that point the new 18" wide Super 400 and companion 17" wide "Advanced" L-5 were just about ready to launch, with this original style L-5 soon to be supplanted by them. In practice this was not an instant transition as some players continued to prefer the older L-5 and some were still shipped from Kalamazoo for several years onward.

The top, back, and sides on this guitar carry a beautifully blended dark sunburst finish; the back is tiger maple with a pronounced figure. The top and back are triple bound in white celluloid. The braces are the "kerfed" style used in the early 1930's, a production expedient allowing faster build times. While this has become a much-discussed feature of late, we do not find tremendous sound differences between many of the L-5's of this era regardless of how they were braced.

The side-line bound, straight-end ebony fingerboard has genuine pearl block inlay in place of the pearloid found on earlier 1930's versions. The 3-piece laminated curly maple neck is not as slim as some with a subtly rounded spine, with just a hint of the sharper "V" profile common a couple of years earlier. While not as chunky as the original Loar-era necks, this one feels more substantial than many from a couple of years earlier.

The pearl inlaid flowerpot in the triple-bound headstock with a straight across "Gibson" logo above are hallmarks of the 1932-35 L-5, as are the then-new Grover G-98 tuners. These are the older style, gold plated with the first pattern riveted gears and metal "butterbean" buttons. The long triple-bound celluloid pickguard is screwed to the top by the neck block instead of pinned to the side of the fingerboard. The tailpiece is the 1930's "string through" piece; the original adjustable ebony bridge is the smaller mid-1930's solid base style shared with lower-end Gibsons, but also used on many L-5's in this period.

This instrument has a very even and versatile sound typical of these early L-5s; simultaneously warm and incisive with plenty of depth. It plays very comfortably and is extremely responsive for an archtop guitar...it even sounds lovely fingerstyle! It is another delightful and inspiring example of one of our all-time favorite instruments.

The body shows no cracks at all, repaired or otherwise. There are two very small screw patched holes that indicate a second pickguard was mounted at one time, or the guitar was once set up left handed which seems less likely. There is a minor finish disturbance on the top near the fingerboard, a telltale sign of an old floating DeArmond pickup having been mounted there.

The center back of the neck was worn through slightly on the spine and has been oversprayed between the heel area and the base of the headstock, with some old wear still visible beneath. There is a repaired seam separation to the center neck laminate down towards the heel area; this is fairly discreet but visible on close inspection. This was solidly sealed up long ago, and is most likely the reason the neck has some overspray work done in the first place. There is some touch up in this area that is over the overspray. A small strap button hole was patched on lower treble side of the heel.

The guitar was refretted some time back with wire that is a bit taller than the original; the frets are quite comfortable and not obnoxiously oversize. The ebony fingerboard itself shows hardly any wear. The bone nut is newer, the tuners are original and they and the tailpiece show some plating wear.

All hardware remans original, even the often replaced tortoise celluloid pickguard. The original bridge top looks to have possibly been lowered slightly long ago. The neck angle is very good and there is room for action adjustment in either direction if desired. This lovely L-5 is still housed in the original case, which has some typical external wear but is still solid with a replaced handle. Overall this is a delightful example of the final 16" L-5, a joy to play and to hear and just a classy guitar in every way. Excellent - Condition.
×