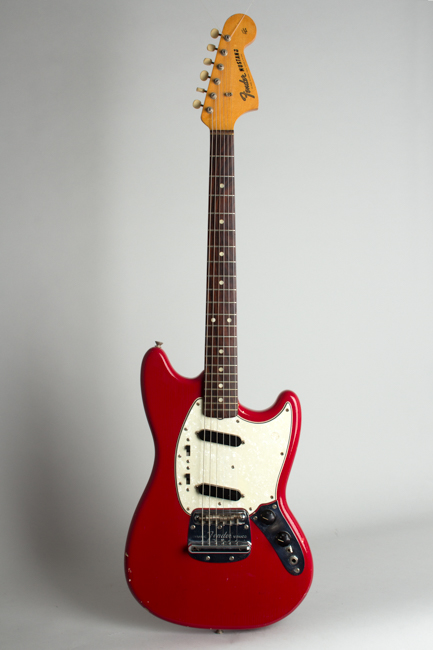 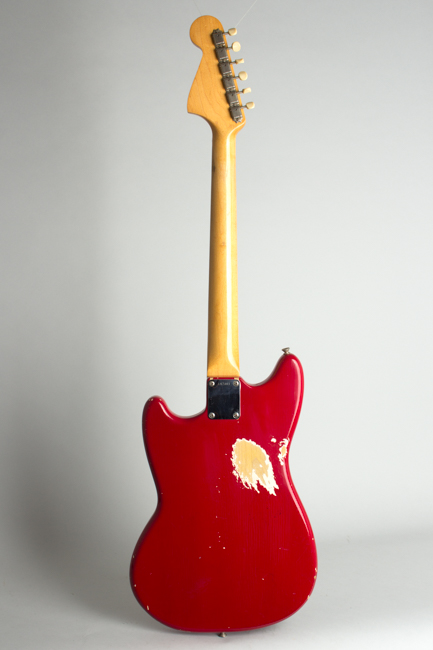 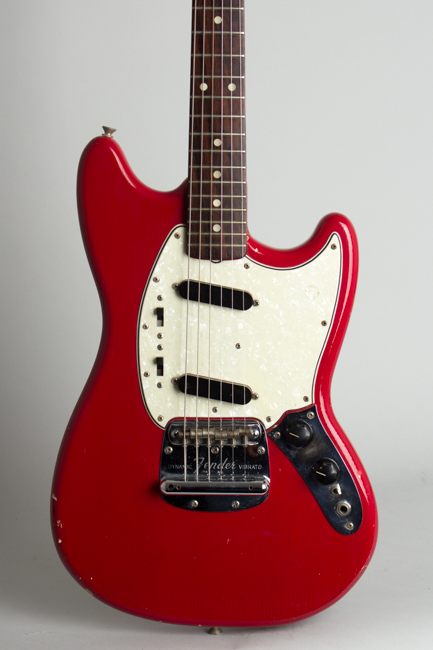 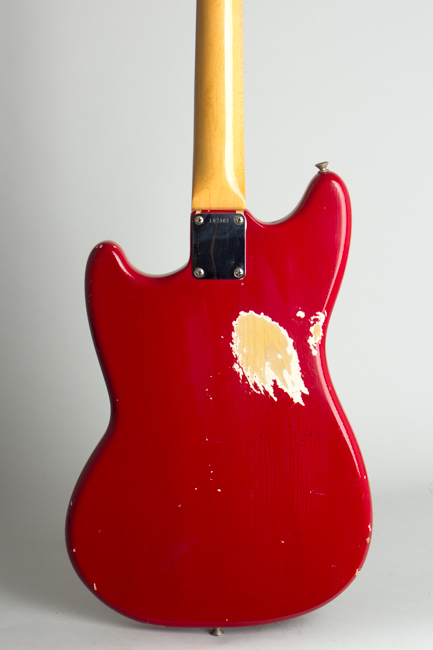 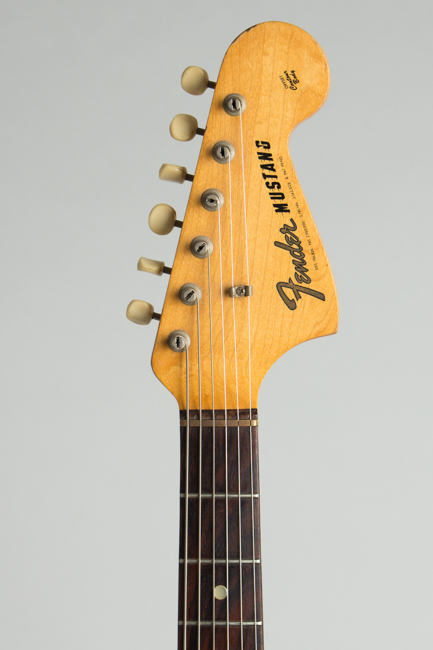 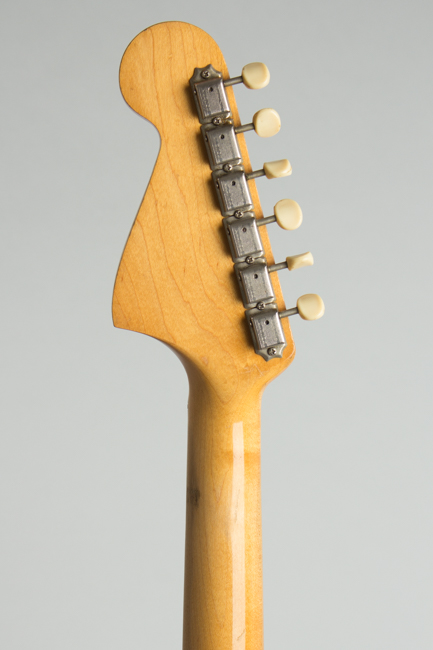 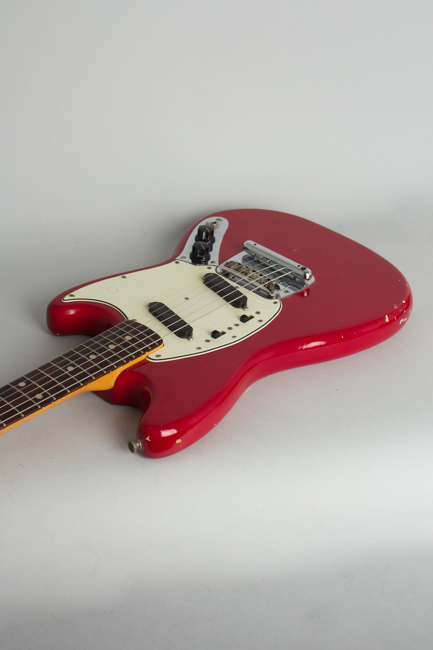 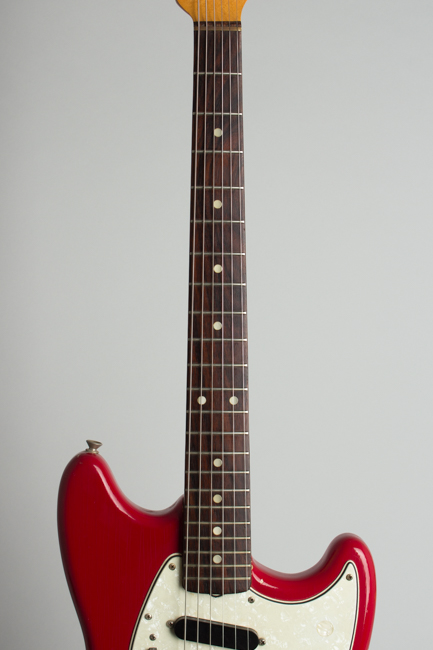 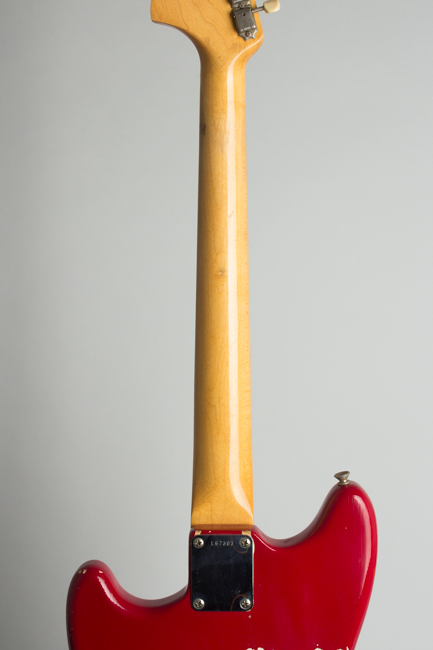 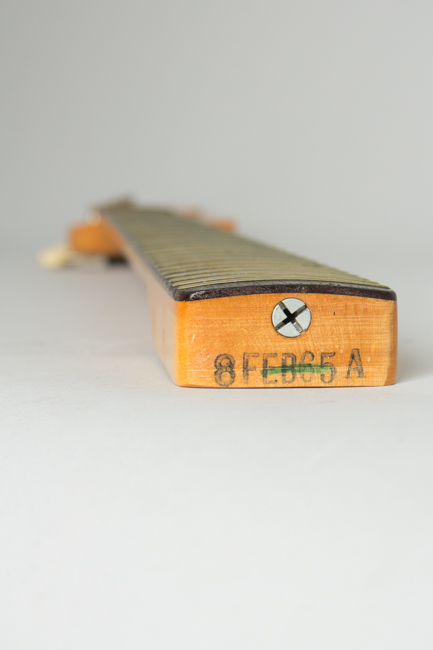 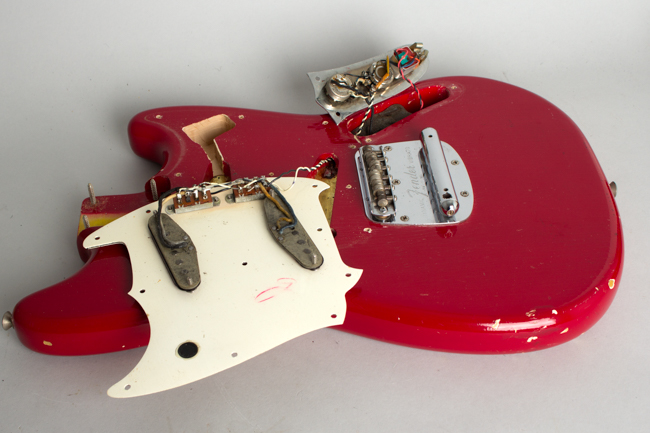 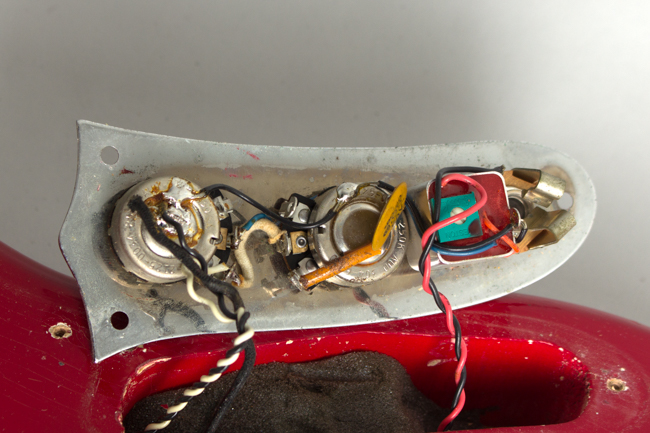 This is a "Hot rodded" Fender Mustang, with some internal alterations but a cool little guitar nonetheless. The neck is date-stamped to February 1965, just weeks into the CBS era at Fender and only six months after the model's debut in the second half of 1964. The pots are from the end of 1964, coded 6450. The body sports the classic red lacquer finish with no clear overcoat, so it avoids the yellowing common on many older Fenders. The pickguard is laminated plastic with a white pearloid top layer. The neck is the standard 24" scale length with a 1 1/2" "A" width at the nut. The serial number on the neckplate is in the "L" series that ended in mid-1965.

We're calling this the "Hot Rod Mustang" as it has something we rarely see anymore: an added preamp with a micro switch that offers two different boost settings to the output. The installation was very cleanly done, with the required 9-volt battery neatly stowed in electronics cavity under the pots. The preamp itself is very compact, neatly slotted in between the tone pot and jack. The micro-toggle is located in that spot on the control plate, offering three settings: bypass, boost and heavy boost, which is pretty rip-roaring when engaged!

This installation was done without any additional routing beyond the small hole in the control plate. Unfortunately a filled round hole in the PG sits over a rout in lower horn for now-removed switch, which is currently unused but also unfilled. It doesn't affect anything, but it is there. The guitar has also had the trem bar reversed and locked solidly, with the rocking bridge pinned in place as well. This makes for a very solid player compared to the standard somewhat flexy Mustang term, more suited to aggressive strumming.

The Mustang, Fender's classiest student guitar, hit at just the right time in 1964 and was instantly successful, and ever since has proved a timeless favorite of countless garage bands from the 1960's and 70's through today. This one has an interesting history, wherever it has been. The modifications could be reversed if desired but as these are not overly rare guitars we will let this one remain as it stands, offering a funky, more aggressive sounding twist on the Mustang formula.

This guitar shows wear overall and modification as noted but remains a great player with a cool vibe. The body finish is original with some general checking and scuffing with numerous dings, dents, and chips (mostly on the sides) overall with a decent swath of belt-buckle wear on the back. A faint sticker-removal spot can be seen on the top below the bridge area. The filled hole in the pickguard is well-done but visible; that and the small 3-way switch on the control plate are the only visible indicators of the guitar's hot-rodded status.

Apart from the added electronic boost the guitar remains mostly original, including the pickups, switches, pots, bridge, tuners, and the pearloid pickguard with one filled hole. The added switch route beneath is empty. The wiring between the functioning upper switches and the pots is later, and there is obviously some re-wiring in the electronics rig to accommodate the mini-preamp. There is one other added relic of the late 1970s, a brass nut.

The neck finish is undisturbed with some light wear on the back, including the Mustang's common dent from bouncing on the poorly-placed hold-down snap in the now-departed original case. The original frets are in good shape with only very minor wear and this is an excellent player. With its locked trem, solid bridge, and rip-roaring preamp, this guitar has a definite punky vibe, but it works well in any context. While we usually prefer all-original guitars, this one has a sort of 1970s-'80s Hot Rod vibe that is instant nostalgia to those who lived through that first era of electric guitar customization. And when you flip that little switch on this one, the afterburners really kick in! Very Good + Condition.
×