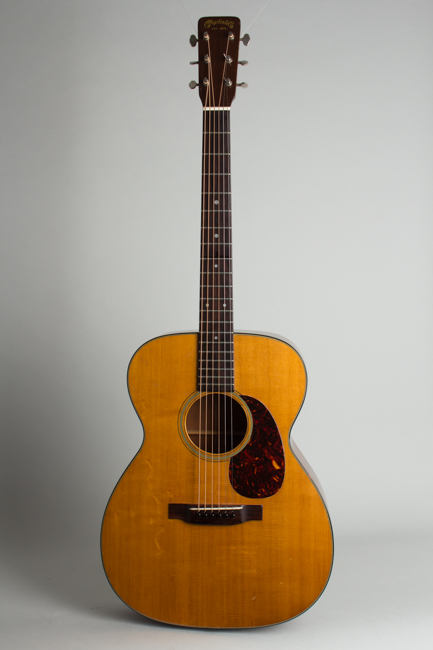 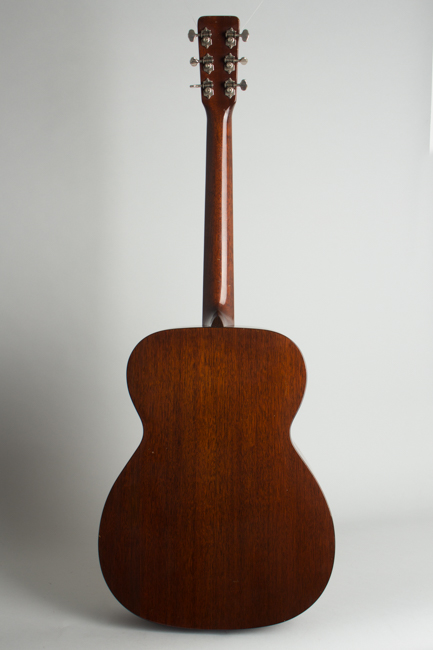 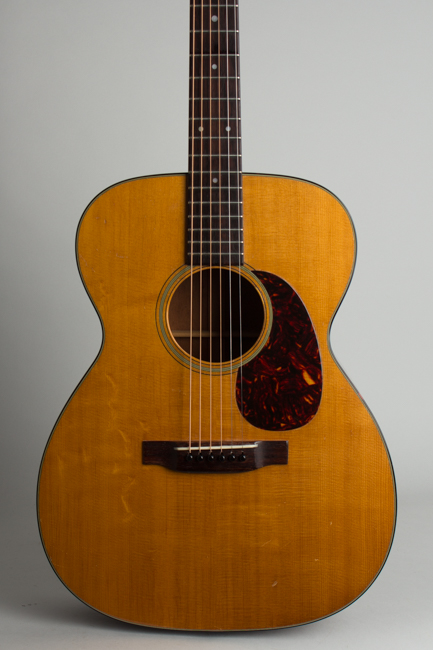 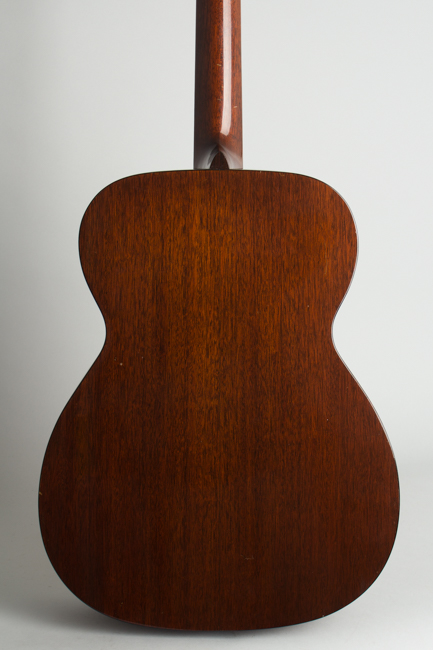 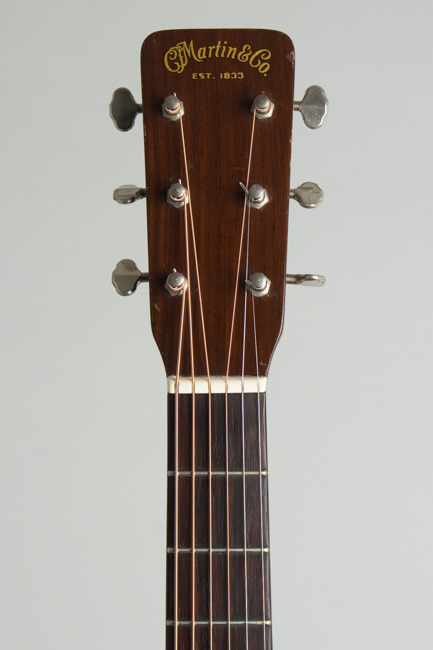 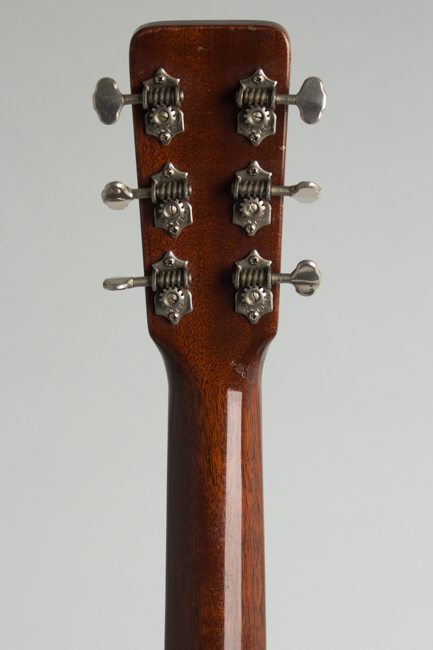 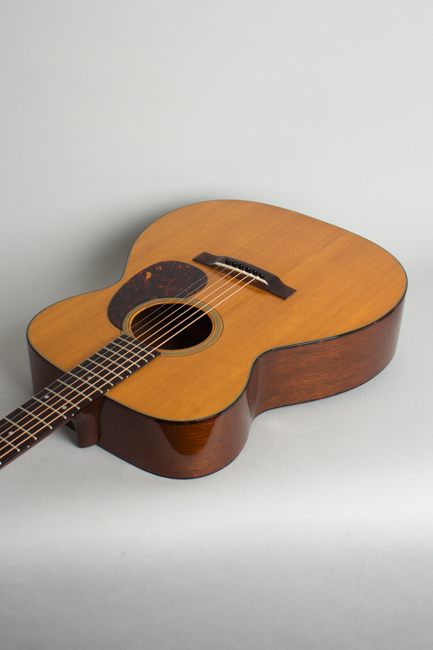 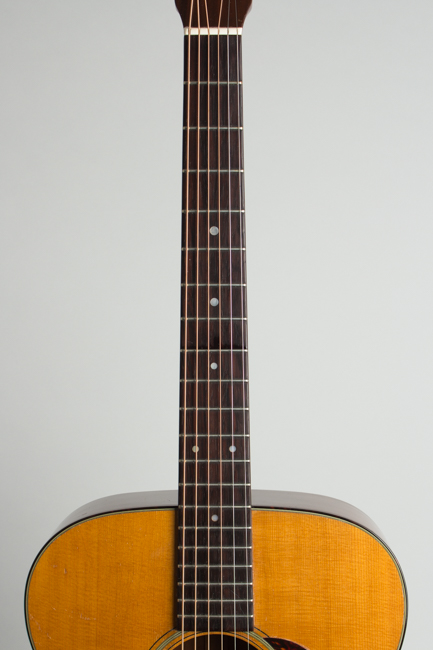 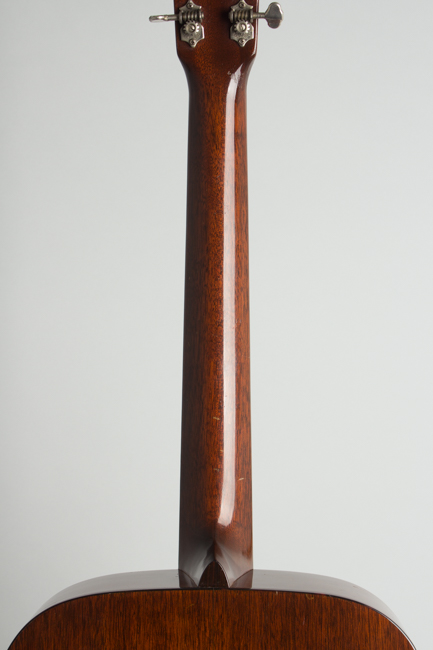 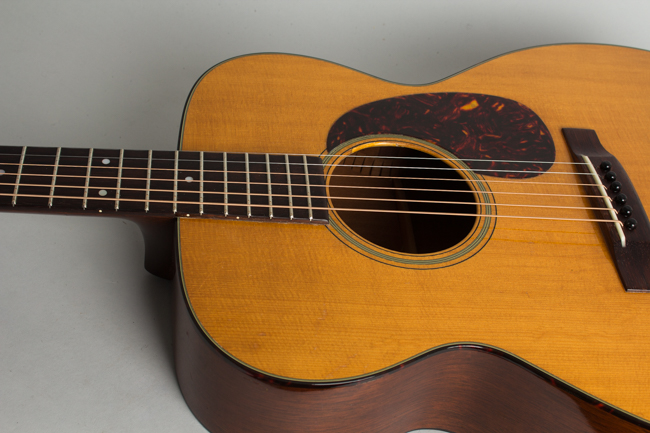 This is a great sounding 000-18 from the height of the early '60s "folk boom", before the Beatles brought electricity roaring back in 1964! To most flat-top players of this era, a Martin guitar was the ultimate goal and the venerable company had trouble keeping up with the demand. This 1962 model was still built in Martin's old North Street factory, which the company moved out of less than two years later. It has a look and feel closer to older Martins from the '40s and '50s than to the more heavily built 1960s instruments to come.

The guitar shows a number of these older features that would change as the decade wore on. The top has a tortoise celluloid pickguard and edge binding, both replaced with black a few years later. Another period feature is the openback Grover Sta-Tite tuners with hexagonal bushings on the typical '60s rounded-edge peghead. The long-saddle rosewood bridge and small maple bridgeplate would also be replaced with stouter fittings later in the decade, the latter of which had more of an effect on sound than any cosmetic changes.

To many players and Martin fans, the 000-18 from any era has remained one of the company's most propitious and beloved combinations of wood, wire, and inspiration. The mahogany back and sides coupled with a spruce top makes for a transparent sounding but still warm and responsive guitar; the 15" wide narrow-waisted 000-size body contributes both depth and clarity to the sound.

By early '60s standards, the 000-18 was a fairly expensive guitar listing at $175.00 (plus case) by June 1962. This represented a substantial investment to many players, especially as the increasingly popular Dreadnought D-18 could be had for only $35 more. This example was built late in the year, one of exactly 300 000-18s shipped. By comparison the D-18 sold over 700 units that same year, making the contemporary 000 something of a rarity. With nearly 60 years of aging this is a superbly light and responsive guitar, an excellent fingerpicker's instrument but also offering plenty of punch and clarity as a straight rhythm machine. It plays effortlessly and rings like a bell, all over this land!

This mahogany 000 remains nicely original and an excellent player. The finish is completely original and nicely aged, finely checked and ambered but not showing any excessive wear. There are some small dings, scrapes, and dents overall, but none of the heavy pickwear often found on older Martins. The only really notable loss is to the bottom edge of the sound hole rim, which is worn down into the wood in several small spots. The finish on the back and sides shows not much wear at all, and the back of the neck is very clean except for some tiny dings in the 9-10th fret area.

The guitar shows no alterations and just some relatively minor repairs. There is one repaired spot of impact damage on the upper side, above the endpin. This is sealed up solidly but visibly, with only a bit of topical touch up and no overspray. There is a small patch re-inforcing the bottom edge of the sound hole where it is most heavily worn. It looks like a small piece chipped off and was replaced. This is also visible but not overly conspicuous. Other than these repairs the guitar is crack free, which is unusual for most Martins this old.

The original small maple bridgeplate remains intact, and the original full-height bridge has never been bridge has been cut down or even reglued. The guitar has had a neckset and plays extremely well. Nearing its 60th birthday, this guitar feels and sounds great. The vibe is even "older" than the guitar actually is, with a nice dry but still mellow ring identical to the 1950s mahogany 000s. This is a sweet guitar and extremely friendly playing Martin, housed in a modern HSC. Overall Excellent - Condition.
×